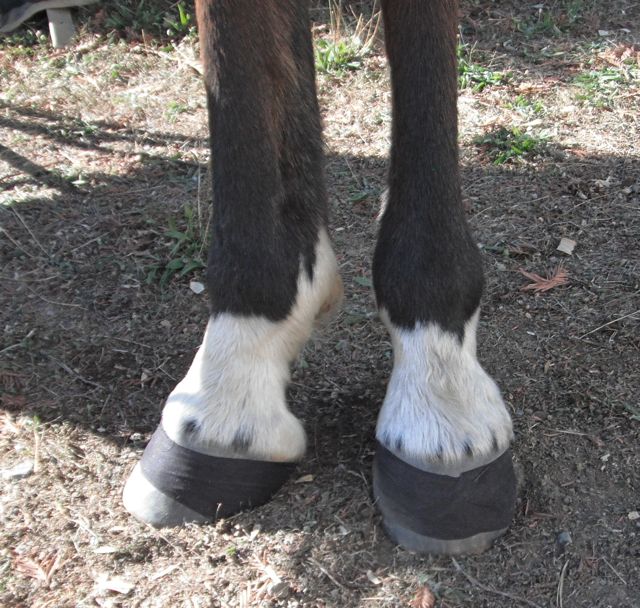 Are you still twisting those hind hoof Gloves, or, worse yet, losing them completely? Even with the proper use of Mueller Athletic Tape and a good trim and boot fit? I do… Why? Well, look at my mare’s legs in the pictures, and you will see why! She is a great horse, but took the philosophy that a little cow-hocked is fine in a horse, and ran with it a bit too far. Thus, she toes out a good bit and with her nice, Morgan/QH rear end (wish her brains were there too: lately the Arab half has come out on that end), she powers along with a good twist to her hind leg movement.

This means every boot (EC styles and competitor brands of all kinds) has not stayed straight on her hoof, and can come off altogether at a canter. Glue-On boots solve that for multi-day rides, but for a single day ride, I don’t want the hassle or expense. So I had to come up with a solution for her. I tried varying ones (Goober Glue, Vet Tech products, etc) and finally found a cheap and fairly easy solution: a bottle of Gorilla Glue and some athletic tape.

How it Works
1) Use athletic tape on the hoof as you usually would (see how she toes out? Add a “twist” with every push off of the hoof, and you have a lot of torque on the boots).

2) Put on the Gloves as usual. I put power straps on the inside here, but also use them on the outside. With Gorilla Glue, the boots are totally re-useable. This is the fourth gluing on these particular boots. 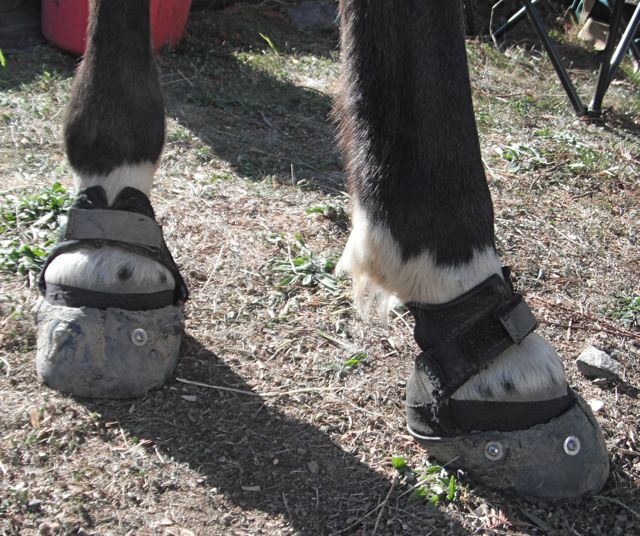 3) Gather your tools: Gorilla Glue, flat head screwdriver (smallish is better), gloves for your hands, and more athletic tape or duct tape if you prefer. 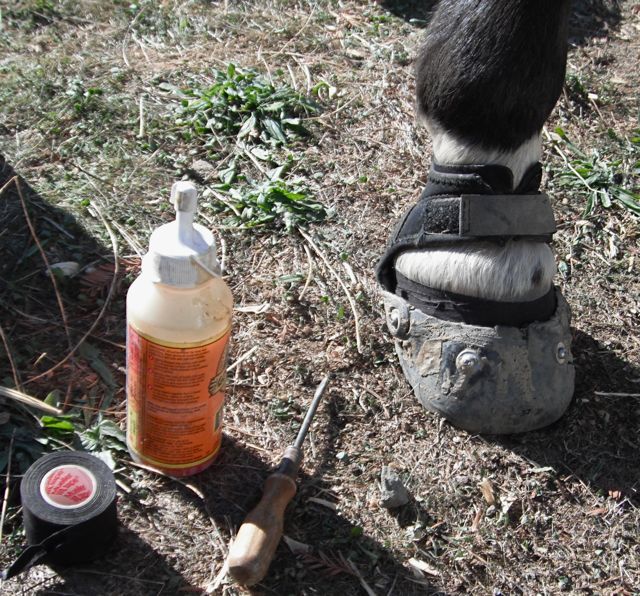 4) This is where it can get tricky if your horse is new at it. Having a helper hold up one of your horse’s front feet to keep them from picking up the rear one or walking off can help until (like my mare) they figure out you want them to keep the foot down and still.

Insert the screwdriver between the hoof wall and the boot, gently prying the boot away from the wall and exposing a gap. Start near the back where the gaiter attaches and work all the way around the hoof (see photo below). 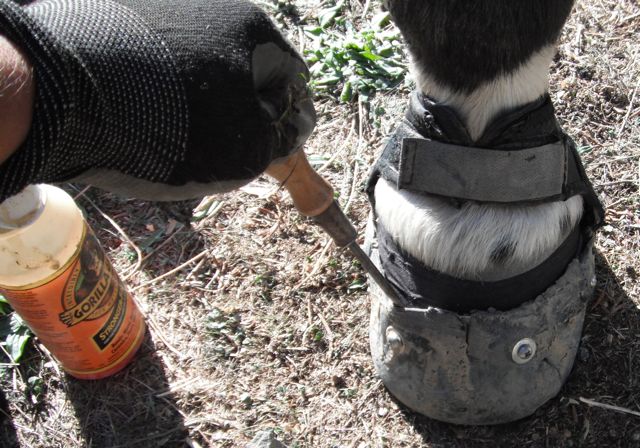 5) Insert tip of the GG bottle into the gap, and squirt glue down into the boot. You will figure out with trial and error how much you need. Just like with Adhere and Glue-On boots, some horses need more or less. Try at home before you go to an event. Do this all around the boot from gaiter edge to the other gaiter edge. I have not needed any in the rear of the boot so far, and a little will flow back there anyway on its own. Using two hands works best. I had to take a picture with one hand, so had to figure out how to balance the bottle and screwdriver in the other. 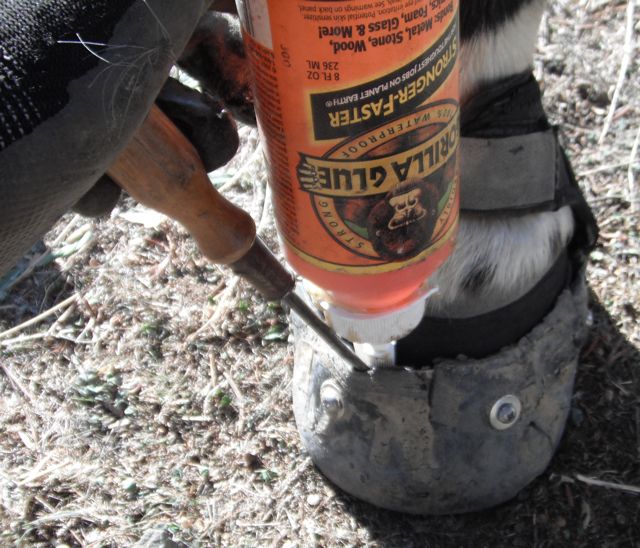 Below is a close-up of the glue down in the gap. GG foams up as it dries, expanding and thus filling in some of the gaps that cause the rear boots not to fit as well, as well as providing ‘stick factor’. 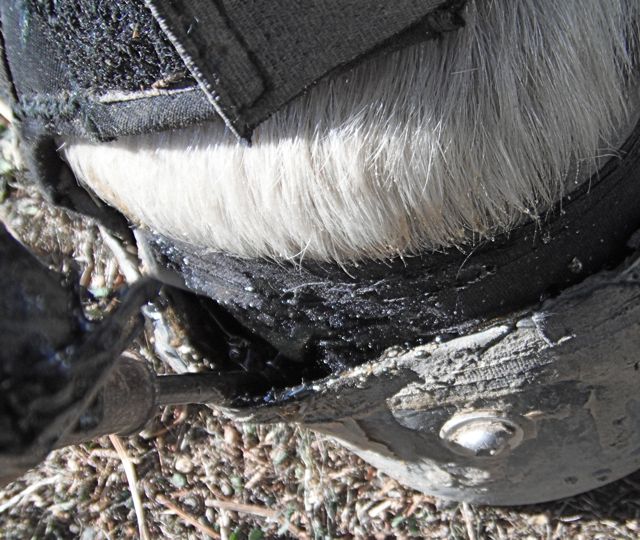 6) Take your roll of athletic (or other) tape and wrap it around the top edge of the boot, all the way behind the heels and the front. A few times around is usually plenty. This helps keep things in place while the glue dries (it takes a few hours) and puts a little pressure on the boot to help the glue foam into all the gaps, instead of out the top of the boot. You can see the foamy old glue on the outside of the boot. 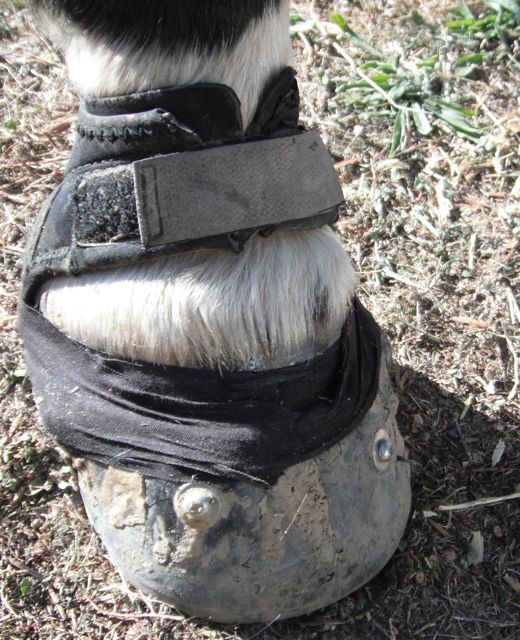 Both feet finished and waiting to dry. Do this after a ride or anything else that will cause your horse to move around too much. Remember, it takes a few hours to really set up nicely, and you don’t want it to set up twisted on the hoof. I do this the night before an event and just leave the gaiters loose overnight, then tighten in the morning. 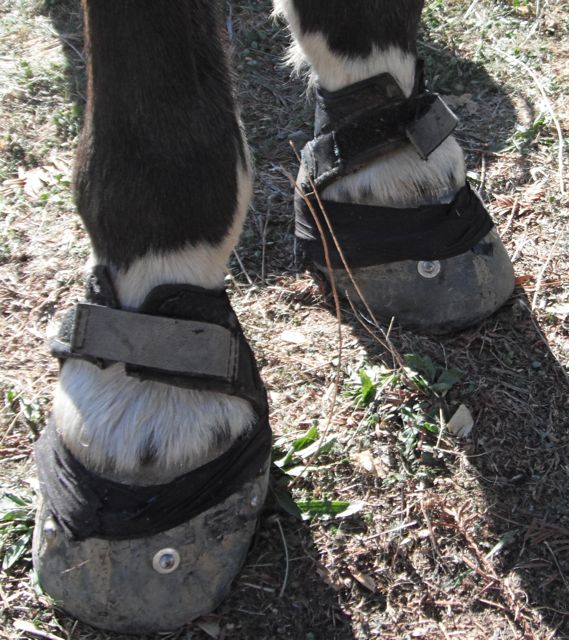 Removal and Cleanup
Removal works just like with Glue-Ons. Using a flat-head screwdriver and a rubber mallet, carefully pry the boot away from the hoof. This works best if you stick the screwdriver head between the hoofwall and the athletic tape. Once you get the boot off, just pull the tape out of the boot, which removes most of the glue.

I actually like some of the glue to stay in, as it creates a custom shimming in the boot, so I can use the boots on training rides with minimal twist and no glue. Just mark the boots so you know which goes on the right and left hoof. The glue comes out pretty well, and it is ‘softish’, so leaving some residue in the boot (even on the soles) doesn’t bother the horse.

This was a shot of the boots after three gluings, just before I put them on for this one. 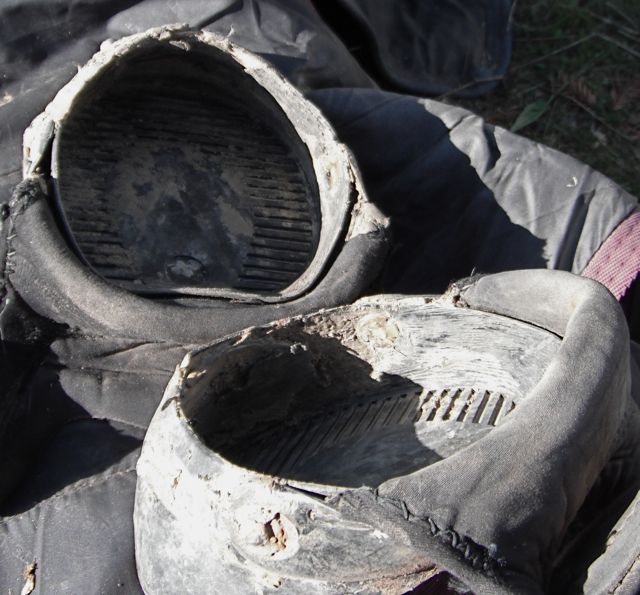 You can see how the glue and some left over tape has lined the inside of the boot, making it somewhat of a custom fit boot. 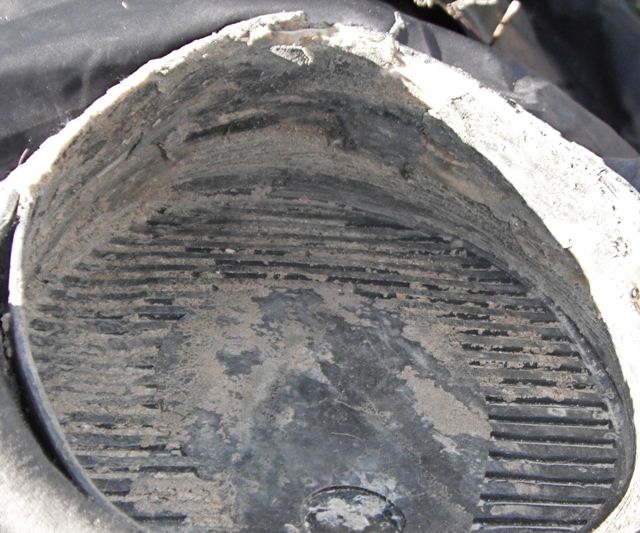 And the other boot: much less glue stuck to this one. You can see the power strap a bit better on the inside as well. 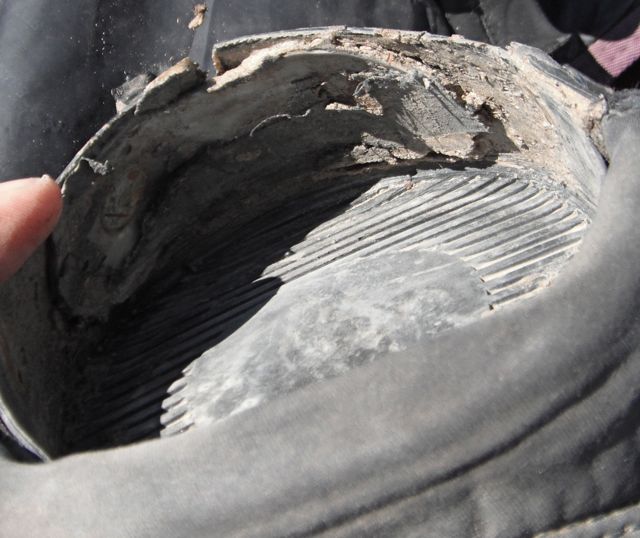 I hope this helps a few of you. It works great on my horse, and we tried it on a little gaited horse that also twists off Gloves. It worked great for her too!