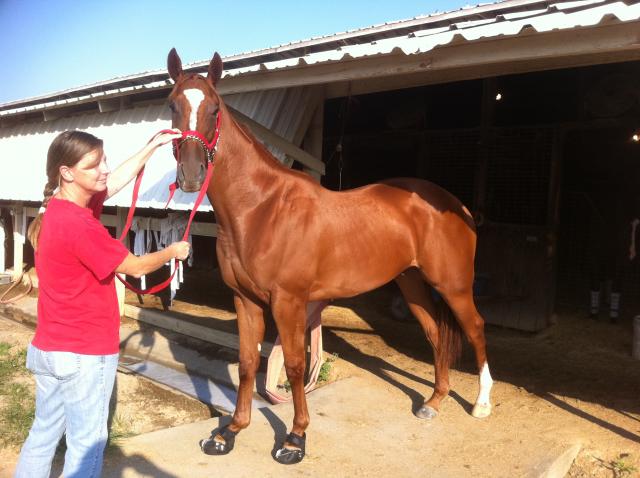 Finally the day came when we could pull his shoes, and I could get started on my new project. Banfish, who is two now and is only doing light work at the track, had been sick when he was a foal. The sickness affected his entire body, including his feet. After months of love and attention, Banfish fully recovered from his illness. Except his feet were still a mess.

The track farriers put shoes on him as they always do, but in time he developed a quarter crack that spread all the way to the hairline. To correct the crack, glue was applied to the crack and the metal shoe was cut so that it stopped just in front of the crack. Yes, that’s right. The shoe itself went from one heel, around the toe, and stopped just in front of the quarter on the other side of that foot. No shoe under the quarter or heel on that side of the foot. 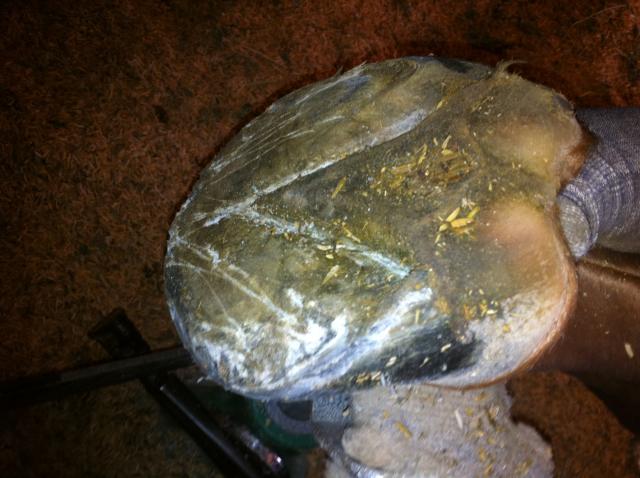 When I removed Banny’s shoes, I quickly agreed that he had the worst feet in the barn. Unsurprisingly, his heels had been lopped off to accommodate the shoe. To my horror, however, I also found that his soles were in fact the very opposite of concave; the bottom of the foot was thin and bulging at the toe. Yikes! 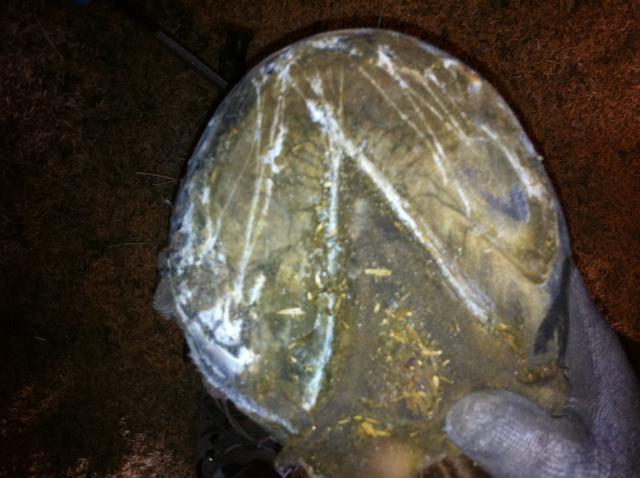 I always air on the cautious side when I am presented with a long toe or long heels. In this case, Banfish had long toes with no real attachment of the hoof wall. 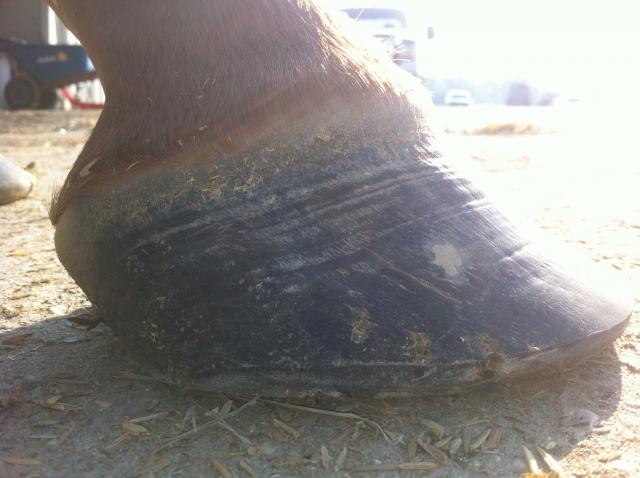 He still has quite a lamellar wedge when my first trim is complete, but I know that I’ll be coming back soon for another go-round. 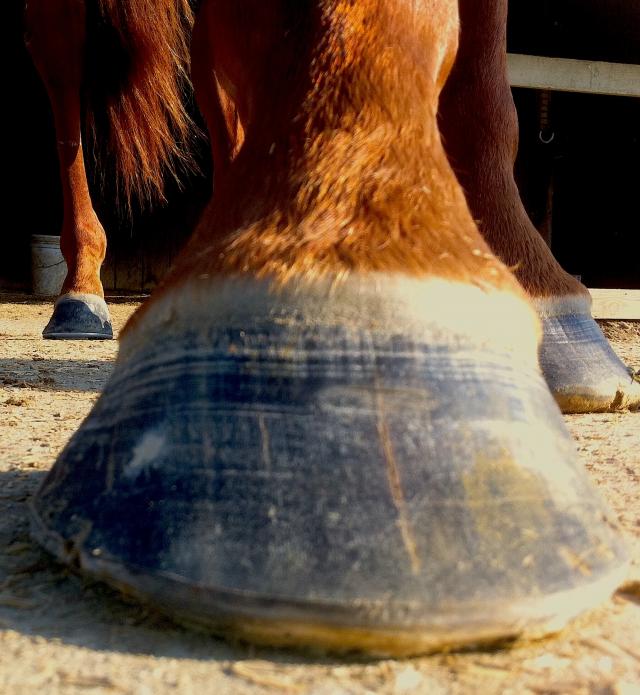 Amazingly, Banfish showed little discomfort as he walked on dirt or sand with bare feet. Nonetheless, he got his own pair of size 2 Epics to protect those unique feet.

Several days later, I met the vets at the track for x-rays of Banny’s feet. Although I don’t always get the luxury of seeing x-rays, boy do they help when I can get my hands on them. And so I removed another inch off of his toes and swapped out the size 2 boots for some 1’s!

Banfish has been barefoot and using his Easyboot Epics for the past two months and has shown some good improvement during that time. Although he began by wearing his hoof boots on the track and on the walker, he was able to begin some barefoot work within just a few weeks of beginning his new “program”. To keep the quarter crack from spreading, I gave him exaggerated pressure relief at the site of the crack. 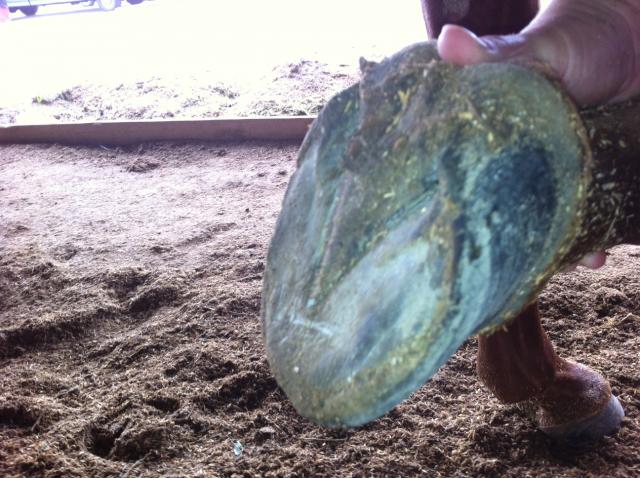 November 7, 2011: some heel has grown, and his foot is slowly becoming more concave. 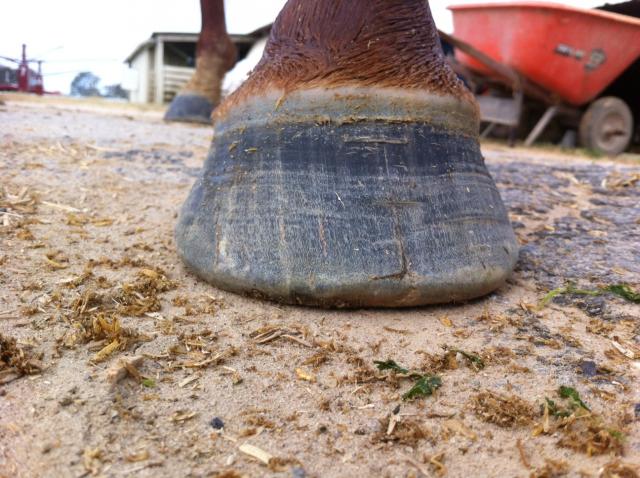 His lamellar wedge has been greatly reduced, and his foot is looking much less like a pancake. Although the bottoms of his feet are much flatter than I would like, he is totally sound barefoot on the barn’s dirt floor and in the track sand. He is still too sore to walk at all on any hard surfaces such as concrete. 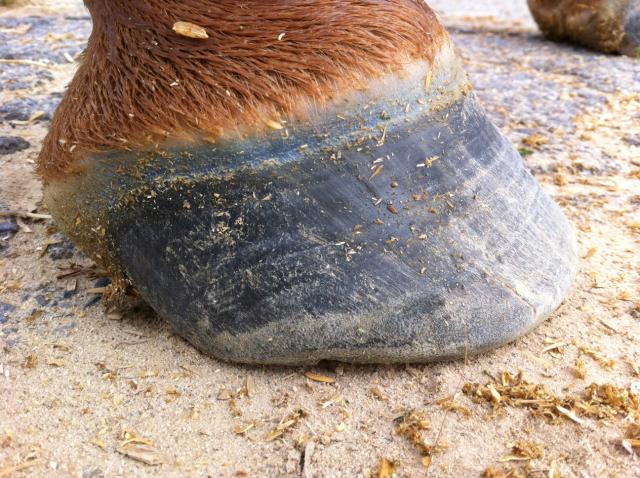 Banny side angle – November 2011.
The healthier hoof has grown to about 1 to 1 1/2 inches below the coronet band.

As you may know, I tell clients that I will only trim their horses if those horses are being fed a dry pelleted food. I cannot make such demands at the track, because (unfortunately) it has been shown that racing horses need the extra energy (sugar) in the sweet feed to perform at their best. And so it is particularly interesting to note that Banfish has made such improvements despite being kept on a sweet feed diet. Keep in mind that the sweet feed fed to racehorses is very different from the typical $5 sweet feed found at a backyard barn. Although racehorse feed is covered in molasses (the real problem), it is also composed predominantly of vegetable oil, beet pulp, and other ingredients found in a dry pellet.

Banfish has been feeling great. So great that he tried to run away with the rider! With this new attitude change, he’s been sent back to kindergarten to learn his manners and his steering. 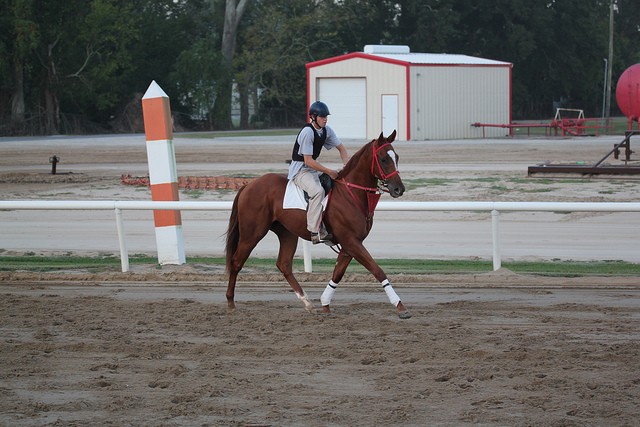 Can we grow a truly healthy foot while still feeding the racehorse sweet feed? The verdict is still out, but with the improvements I’ve seen so far, I’m willing to keep up this experiment in hoof health and nutrition. We’ll look at his feet again in a few months to see if the Easyboot Epics have won out over the molasses.