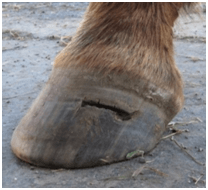 Hoof abscesses can be much more serious than most of us realize. Abscesses usually are misunderstood, misdiagnosed, mistreated and cause our horses unnecessary suffering, loss of use and too often loss of life. The following is a brief explanation of White Line Abscesses of the hoof wall.

It’s commonly believed that a horizontal crack appearing in the hoof wall is caused by injury at the hairline (coronary ridge) that treks down the hoof with the wall growth. However, a crack or rather split in the wall that develops as a result of trauma at the hairline will typically be vertical and will nearly always become a permanent fixture of the wall to some degree.

Conversely, horizontal cracks in the hoof wall are most often caused by abscesses affecting the white line (WL) that rupture at the hairline and migrate with wall growth to the ground where it should be trimmed off. Abscess rupture sites may be any width; from a hole the size of a match head, to several inches wide. Multiple abscesses can affect the same hoof at the same time or in very close succession. More than one hoof can be affected at the same time due to duplicate conditions. WL abscesses generally affect hooves that have been neglected, or that are trimmed regularly, but incorrectly, shod or unshod.

The hoof wall, if allowed to flare, creates leverage on the connective tissue (lamina/white line) between the wall and the sole which can cause stretching of the white line. Laminitic connection stretches to a point, and then separation ensues. 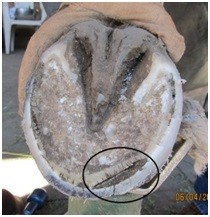 WL separation (the primary and secondary layers of connective tissue detach interrupting life support of one to the other) causes death of the lamina. Once necrotized, that tissue mixes with bacteria and debris and the entire pocket of inflammation causing pus begins its ascension up the wall into the narrowing space between the wall and bone below the hairline. Pain will increase due to the increased pressure as the pocket continues to become more inflamed and makes its way to sensitive nerves near the coronary ridge. The abscess is most painful just prior to rupture. At some point in the process lameness is usually presented in varying degrees.

It’s important to understand that as the pus pocket treks up the inside of the wall to the soft hairline where it finally and painfully ruptures, a channel of dead lamina is left in its wake. The abscess channel will eventually dry up leaving an area of disconnection (a tunnel) behind the wall from the ground to the hairline. Lameness soon subsides after rupture. As the wall grows, new/well-connected lamina develops (grows down) above the descending “crack” and takes the place of the damaged tissue. As the crack (rupture site) treks closer to the ground, the detached wall below the crack may snap off.WL abscesses of the bars: bar abscessing is more serious and painful than wall abscesses. That is because affected areas of the WL may also migrate to the sub-solar connection (papillae) causing eventual detachment of sole and frog and in severe cases can cause permanent damage to the solar papillae.

Mistaken assumptions are made that abscesses of the sole or bars are caused by trauma to the sole. Sharp objects may impact the sole of a soft-soled hoof, but the result generally will be a localized wound. Abscesses and injuries to the bottom of the hoof are different conditions and we need to distinguish between sole trauma and white line abscess to avoid confusion. 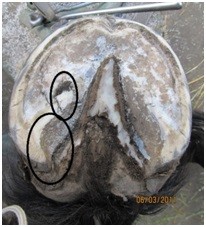 The bars of the hoof are an extension of the hoof wall, which means abscesses can develop in the white line of the bars, tracking up connective tissue to rupture at the hairline of the heel bulb. The lameness that the horse incurs is often described as “mystery lameness.” The resulting rupture sites appear as horizontal splits in the back of the hoof and are typically misinterpreted as injuries caused by forging and other misstep type injuries. When hooves are neglected or the bars left unattended during trimming, the same stretching of the white line of the bar will result – just as we see in the white of the hoof wall.

In a hoof affected by bar abscess, a section(s) of WL of the bar will become blackened where stretching and invasion takes place. The main difference we see in bar abscess is that its affect is not limited to the lamina. But also invasion of solar connective tissue (papillae) often occurs. 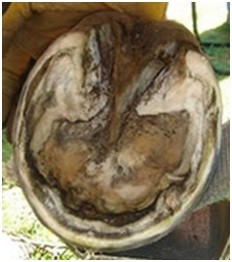 Left in the aftermath of a processed sub-solar abscess is profuse dried, blackened, necrotized residue in place of the once healthy connective tissue. This disconnection will eventually lead to complete detachment of sole material from the hoof as well as the frog in severe cases.

Usually we notice varying degrees of lameness. Horses suffering abscess have been observed lying on the ground, unwilling to stand except to eliminate or, no observable lameness at all. When an abscess takes place in the hind we often don’t observe lameness. Or a horse can process numerous abscesses that no one notices essentially because no one was observing the equine.

Editor's note: Part Two of this blog next week will cover treatment, dos and don'ts, what to expect and common mistakes.