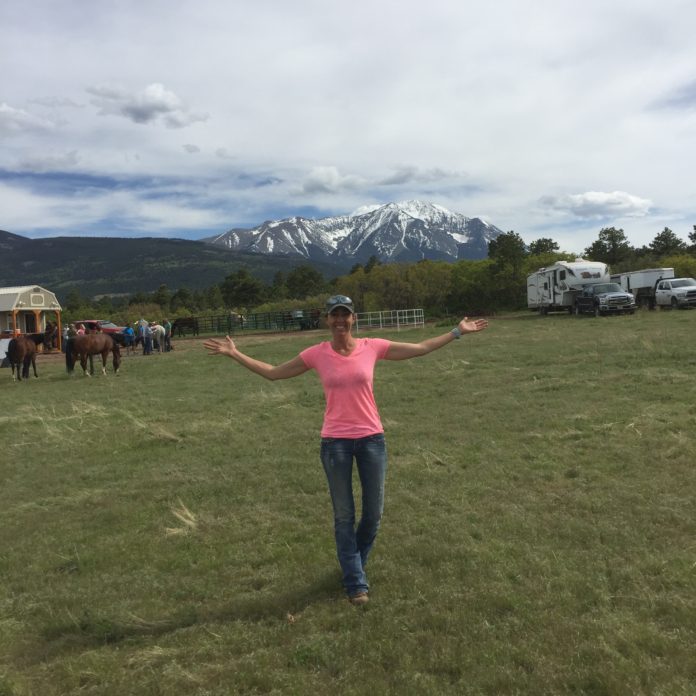 What a privilege it has been for me being able to join Tennessee Lane, ride manager and dear friend, together with other well known riders for the inaugural Spanish Peaks 100 mile endurance ride last week. The location was very close to La Veta, Colorado; in fact, just a few miles outside of this marvel of a small town in southern Colorado.  After the National Championship Ride in Utah three weeks ago, (I wrote a Blog about it last month) this ride was another highlight of the season.

The base camp is situated at over 8000 ft with the magnificent Spanish Peaks as a background. I am using the present tense, because this base camp has been permanently installed with buildings, water wells and electricity by the Lane family and will serve as base camp for all future rides there. All pertinent info for present and future events there can be found on the SoCo Facebook page. 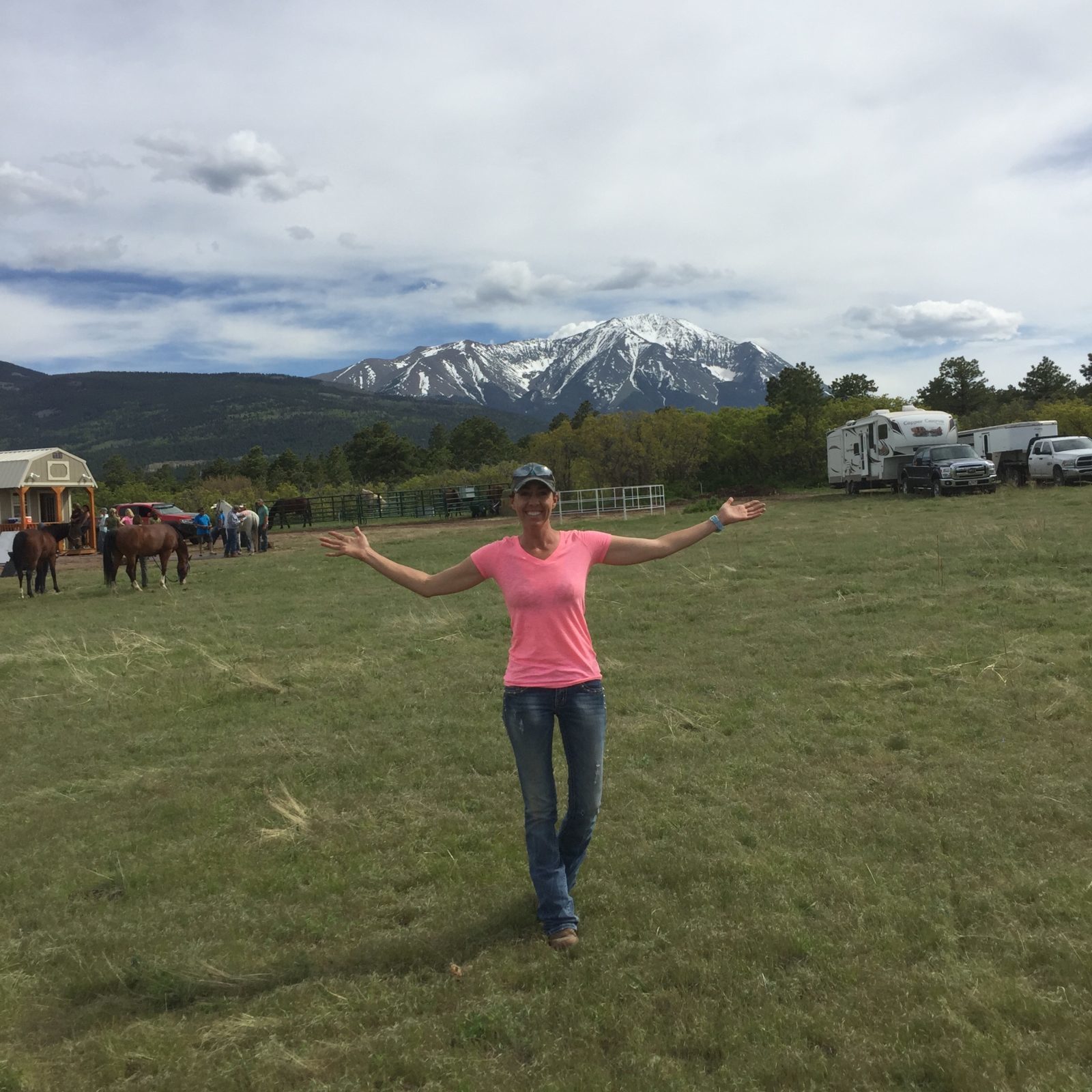 As to be expected, the management and organization were first class, trails perfectly marked. Exquisite catered dinners for riders and crew were the reward for everybody’s efforts and labor.

An LD, a 50 miler and a 100 miler were offered. Trails were tough, no doubt. Many vertical feet had to be climbed and descended to reach the finish line.  Lots of rocks on the trails forced riders to really go slow and take good care of their horses. Many got off and walked the really steep and rocky sections. Truly an endurance adventure, somewhat opposite to the just recent WEC in Slovakia. 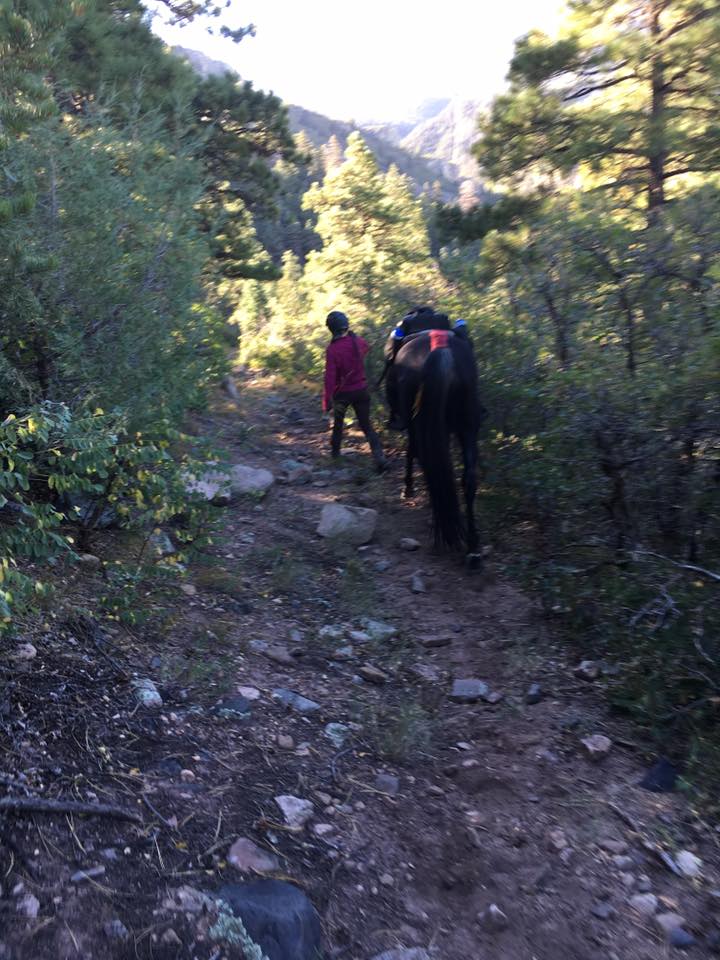 Slow going during the third leg of the course.

The scenery is truly unique, even for the spoiled Colorado crowd. 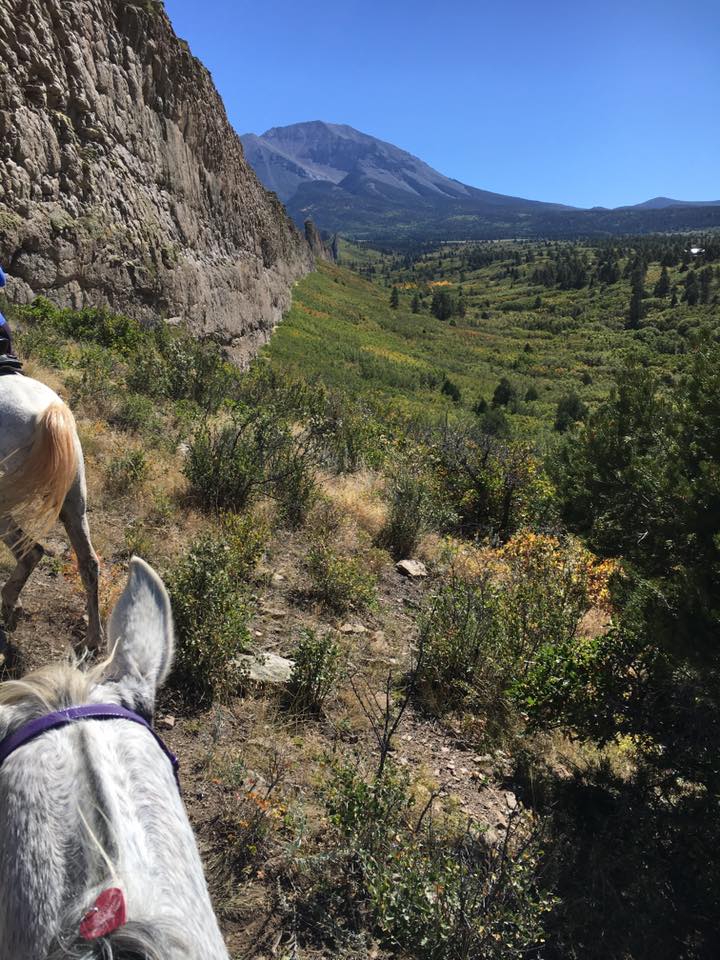 Where do you get to see a sight like this? An old lava formation that has pushed up through some cracks in the ground millions of years ago to build this great wall we can see today. 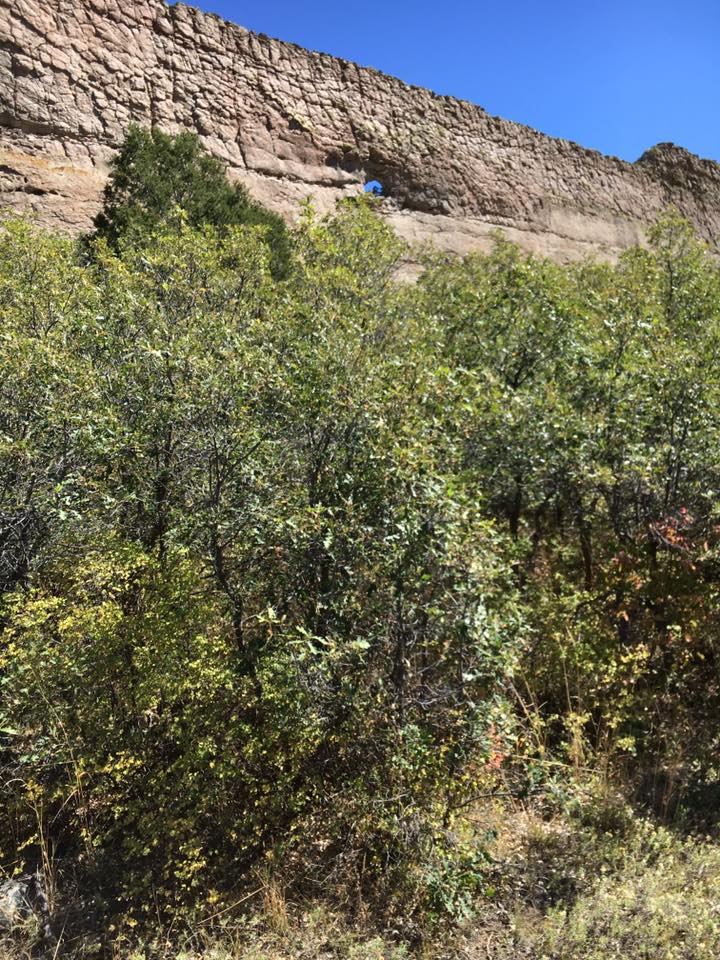 A Mini arch or hole within that lava wall.

The geology is just fascinating: 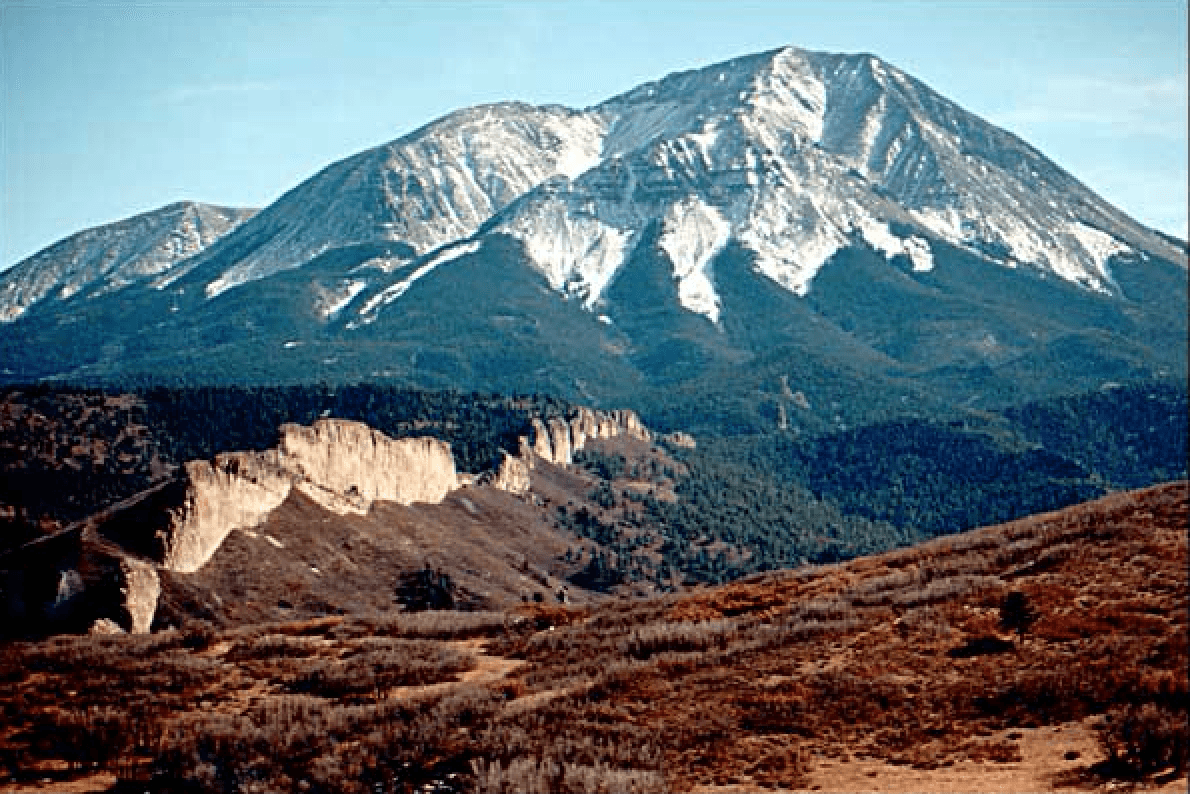 “The Great Dikes were formed during the same period of volcanic activity as the Spanish Peaks, Mt. Mestas and Silver Mountain.
At the time these vertical granite formations were formed by molten rock, they were located several thousand feet underground, below and among many layers of sedimentary rock. Over time, as the ground rose and the softer rock was eroded away, these igneous intrusions were exposed. There are essentially three different sets of dikes in the area. One set emanates radially from the West Spanish Peak. The second set emanates radially from Silver Mountain. The third set crosses the landscape in a roughly N80E direction. The dikes in this third set are roughly parallel to one another and are the longest and oldest of the dikes. This third set of dikes was formed about the same time as the Sangre de Cristo Uplift, the event that pushed up the Sangre de Cristo Mountains.” (Excerpt from the Geology Formation Site).

Completion rates were average for the distances, 90% for the LD, 80% for the 50 and 55% for the 100 miler. Personally I elected to withdraw after 60 miles from the 100 miler because of a slight inconsistency in my mare’s gait, but this decision did not take anything away from the fact that this ride is a ‘must do’ in my book. What really made it so special is the fact that the first place award for the 100 miler was the Wahatoya Cup, donated by Nelson and Neecee Lane, and the Best Condition Award was the Kevin Myers Memorial Cup, named after our dear friend Kevin Myers, who left us all way too early. We miss you, Kevin and will always remember you now with this Trophy named after you. 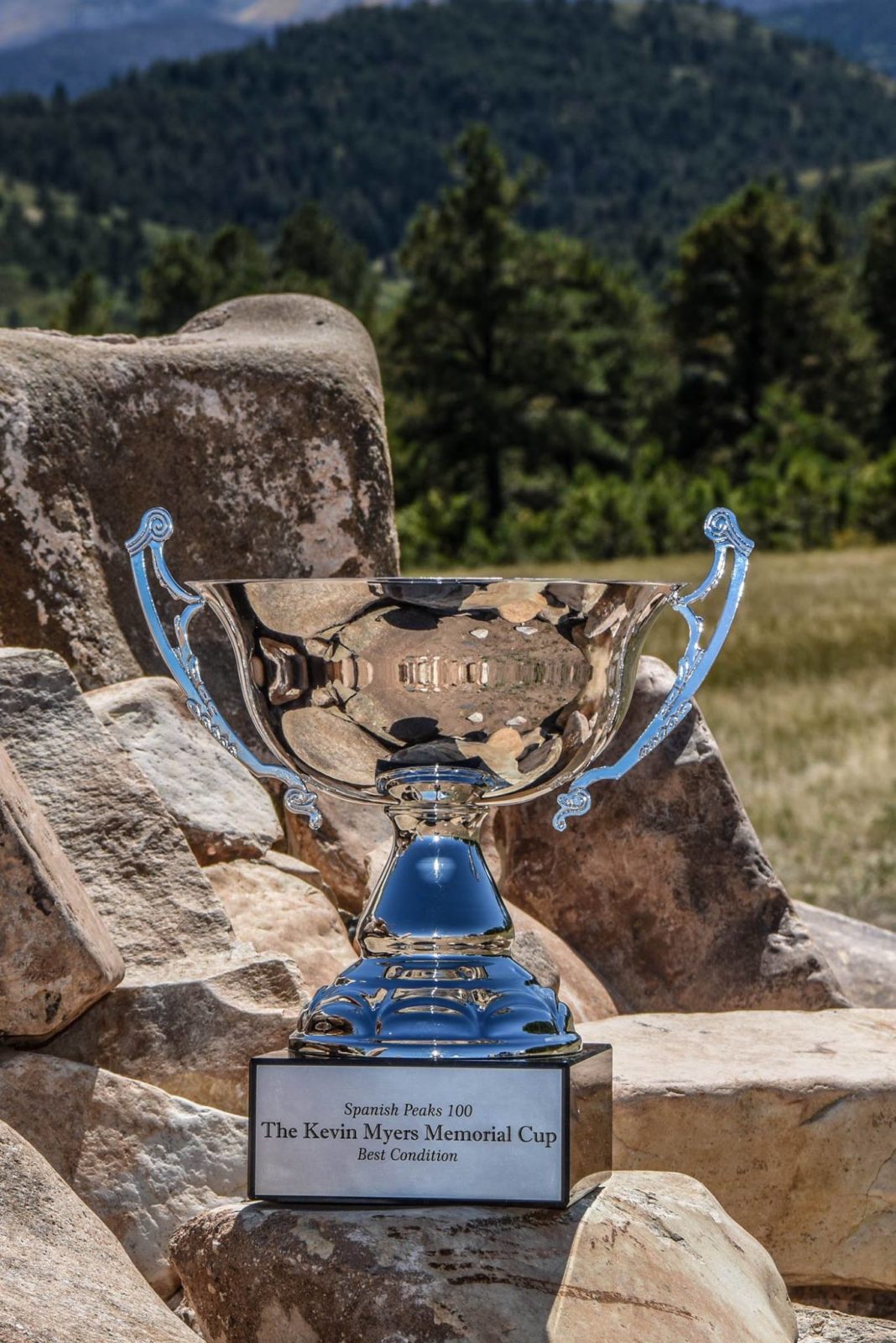 The BC winner this year and in the future years will have their names engraved into the cup. Kerry Redente, riding Bluff, received these honors. 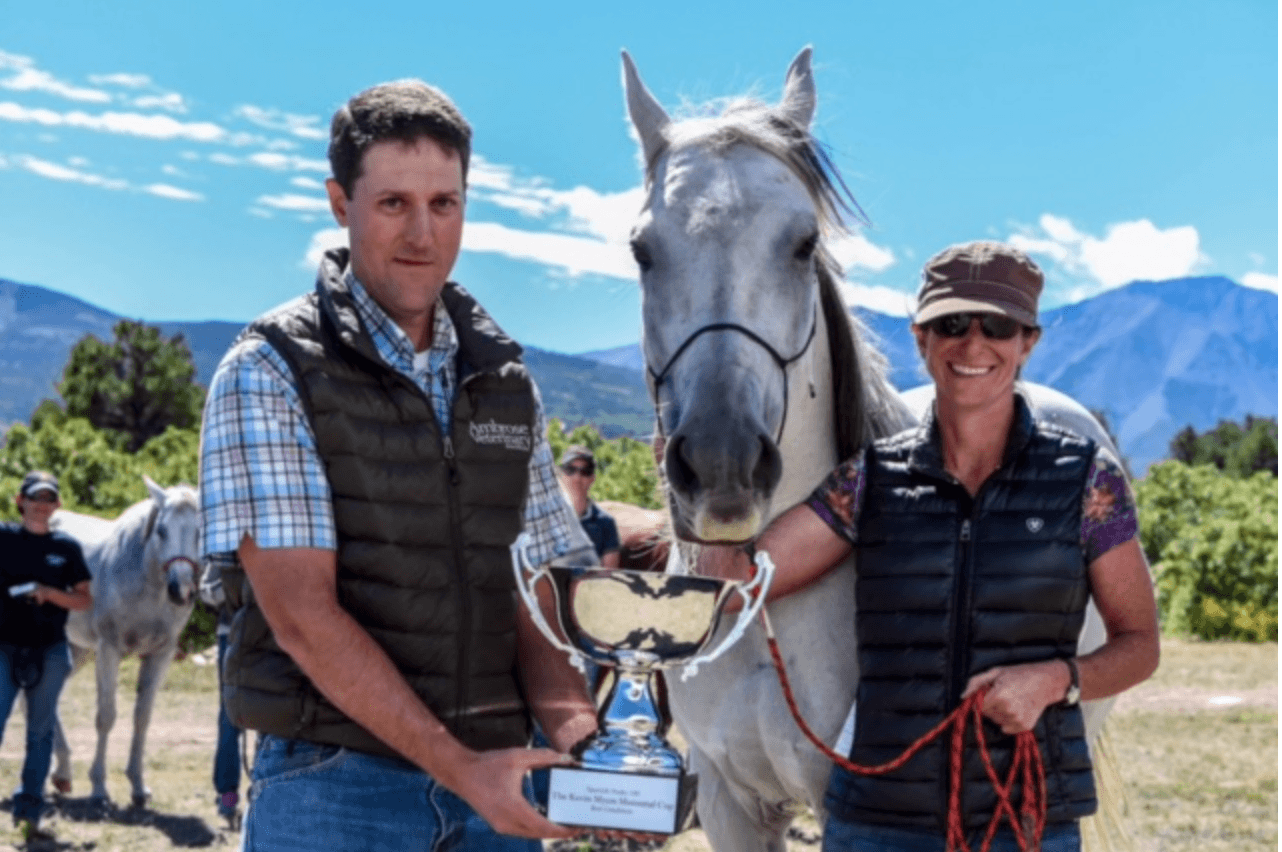 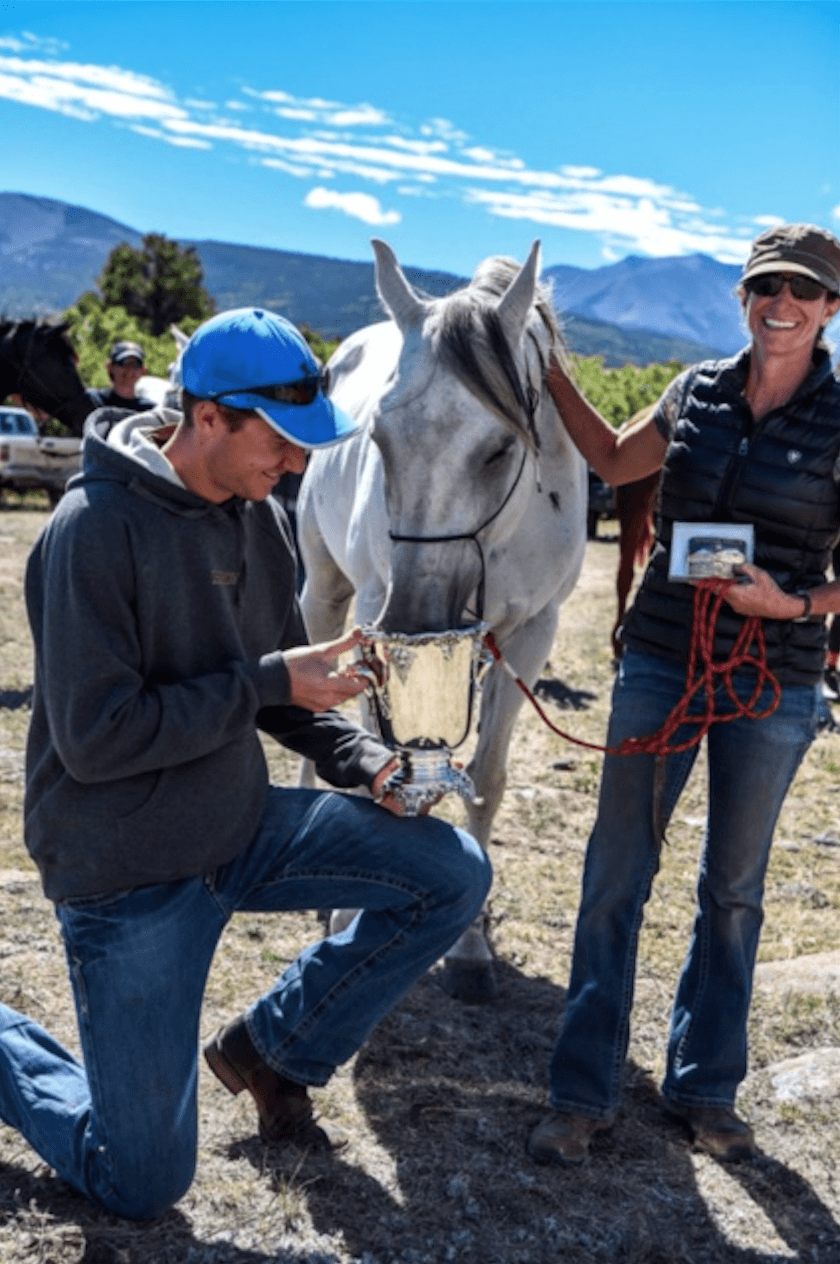 In the end, only 5 riders finished the 100. Four out of the 5 were equipped with Easyboot Glue-On hoof boots.  With the abrasive terrain and footing, these boots were the hoof protection of choice. These results were another testimony in favor of the Easyboot Glue-Ons. Kevin would have been proud. 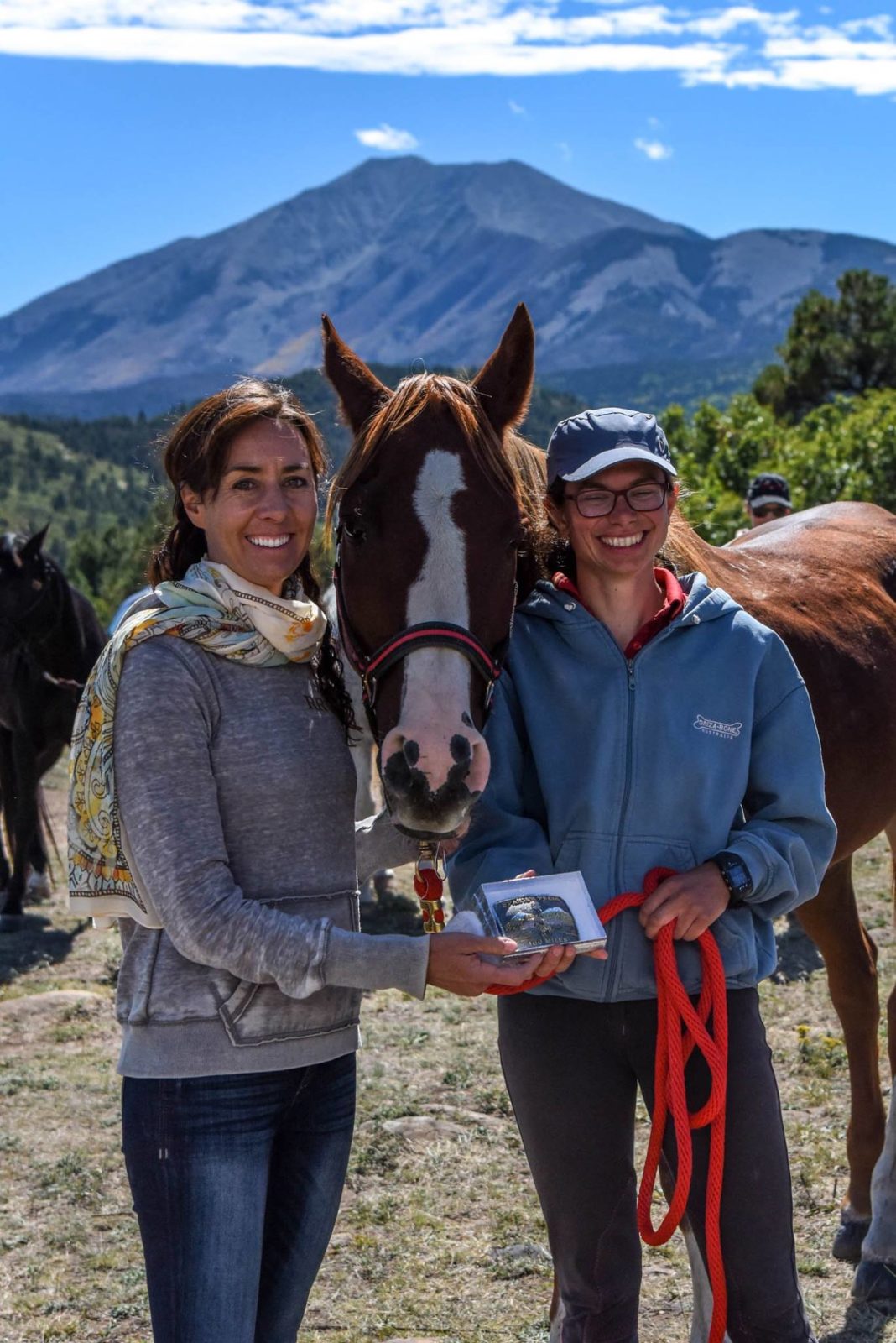 Tina Gottwald from Germany and visiting Global Endurance Training Center in Moab, receiving her Completion Buckle from Tennessee. She was riding TC Mounshine, a veteran 100 Mile horse from the GETC stable. TC Mounshine was also equipped with EasyCare Glue-On boots, just like the overall winner and BC Award winner. 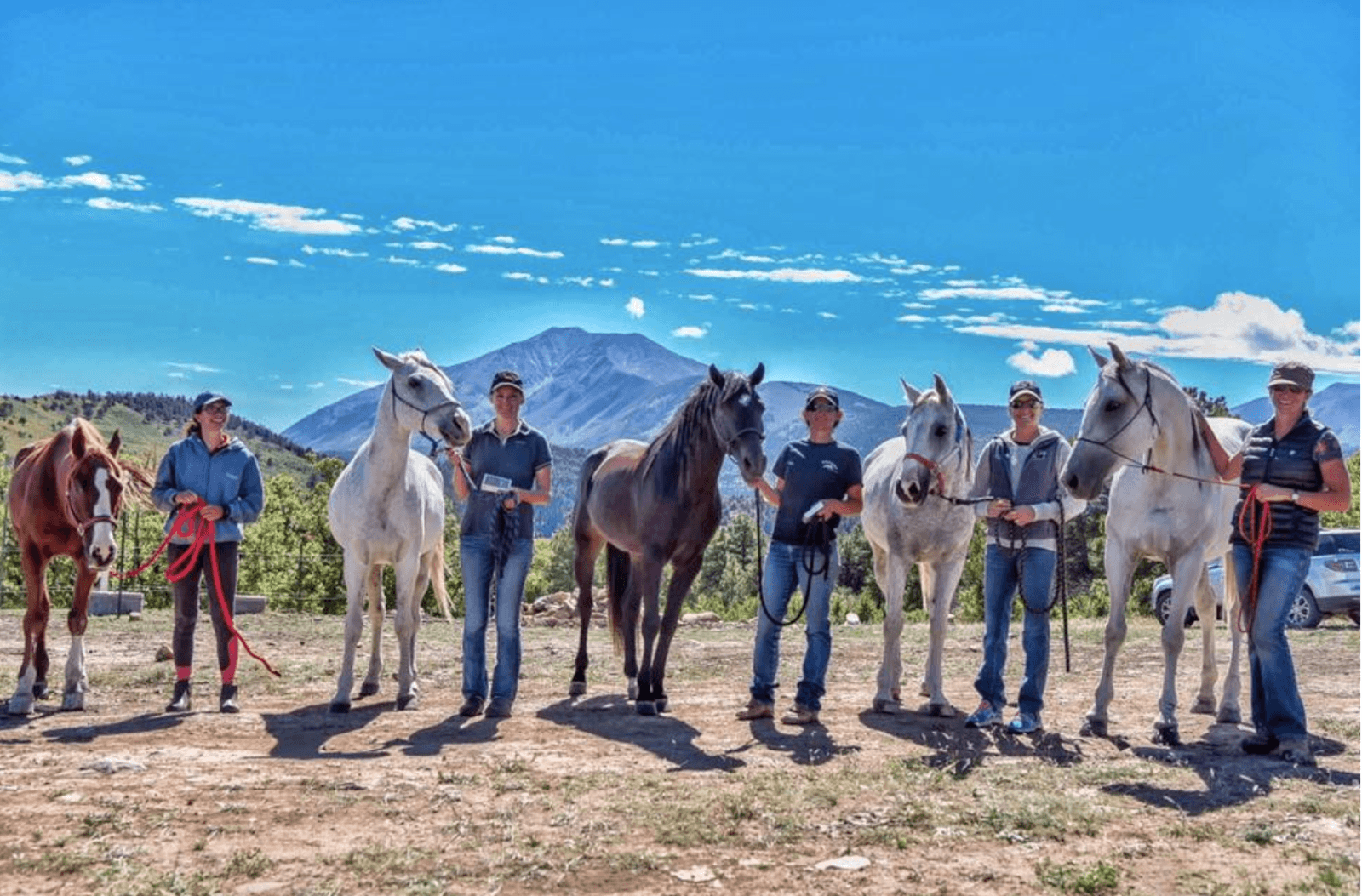 A group photo with all the finishers of the 100 mile ride.

A memorable endurance event came to a happy ending. We are looking forward to next year, where Tennessee Lane will again be organizing three endurance races, one in each month of June, July and August. I, for sure, will attend all three again. Hope many of you will as well. 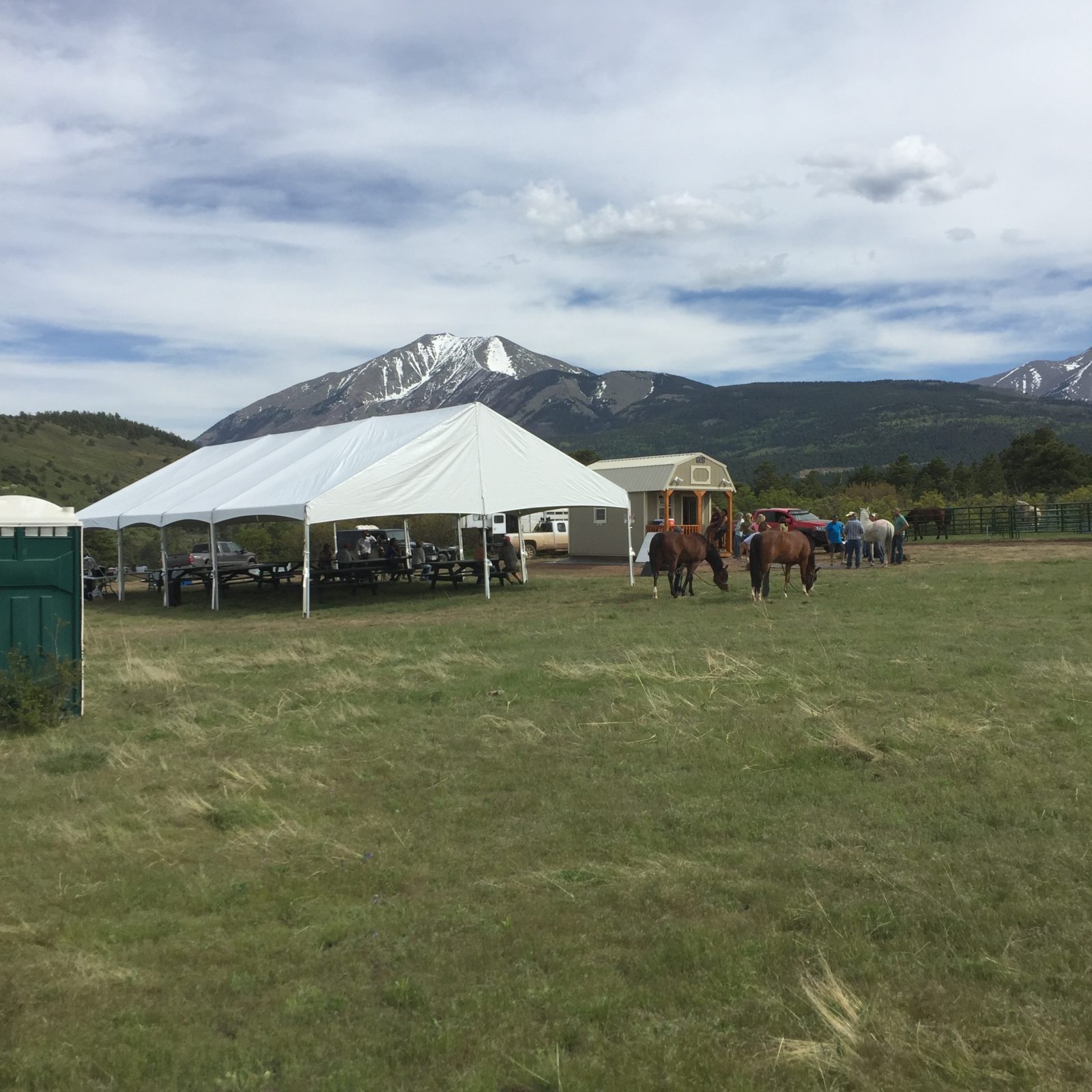 From the desk of the Bootmeister