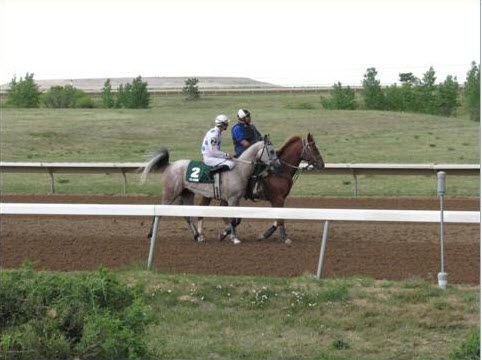 I’ve always been a bit intrigued by the racetrack industry and the mystique that surrounds the horses, trainers, owners and conditioning process.  The stories of horses like Man O’War, Seabiscuit, Secretariat, Seattle Slew and Big Brown fueled my interest and the draw to someday own a racehorse.

Shoe or Boot?
EasyCare hoof boots have been used in just about every equine sport, but have yet to make an impact in flat track racing.  Until recently, hoof boots have been much too heavy and bulky to allow a race horse to be competitive.  When the Easyboot Glue-On was developed, it started my curiosity about campaigning an Arabian track horse in a modified version of the Easyboot Glue-On shoe.

Why Bother?
Life on the race track presents challenges to the equine hoof.  Many track horses have challenges with brittle walls, tender feet, lack of support, and contracted heels from continuous shoeing.  Track horses that rip off a shoe and lose hoof wall also have a difficult time holding shoes and as a result miss conditioning and races.  Track horses are subjected to pounding workouts and as a result are prone to injury.  It is for these reasons I believe the sport could benefit from a more supportive shoe.

I probably heard my college football coach utter the phrase “speed kills” a hundred times.  Size, strength and athletic ability nearly always fail when confronted with speed.  We often entered a game as the bigger and strong team, but left the field beaten badly by a team with more speed.

The term “speed kills” is very relevant to the horse, shoes and the hoof boot world.  Getting shoes and hoof boots to work for a leisurely trail ride at a walk is comparatively easy.  As speed is added, shoes and hoof boots are put under a great deal of stress and torque.  The race track is the ultimate equine speed sport and the next arena for Easycare product testing.  Participation in the race track industry will make our products lighter and sleeker, allowing us to perfect the product line for all equine disciplines.

I’ve tried unsuccessfully to convince race track trainers and race track owners to use hoof boots for flat track training.  I wasn’t convinced they were right. I thought a custom designed racing shoe/boot would give horses that run at speed a comfort advantage and extended longevity. Rather than continue to wonder, I decided to purchase a racetrack Arabian.  My plan was to pull the aluminum racing plates, improve the trim on his feet, condition him a bit in the Colorado hills and then take him back and race him in the new Easyboot Race shoes. 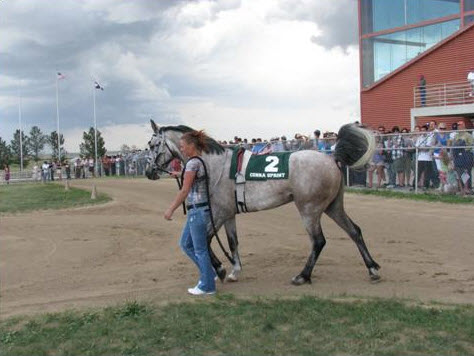 Clunk was purchased for the experiment.  He’s a well breed Arab gelding that I knew I could later use for endurance. I wanted a horse that was currently running and one that I could take back to the track in a short period with the change to Easyboot Race shoes. 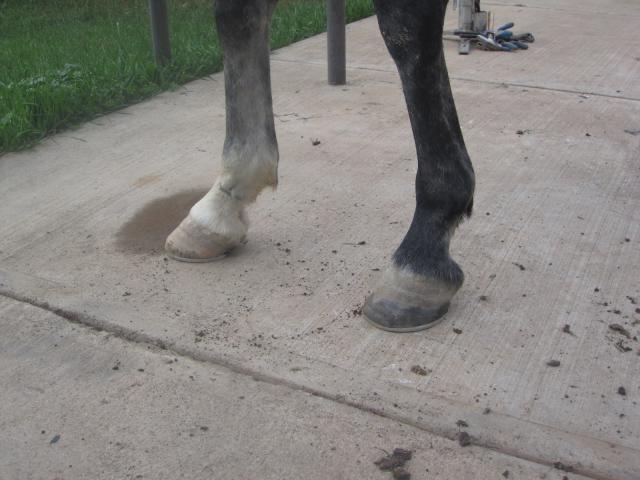 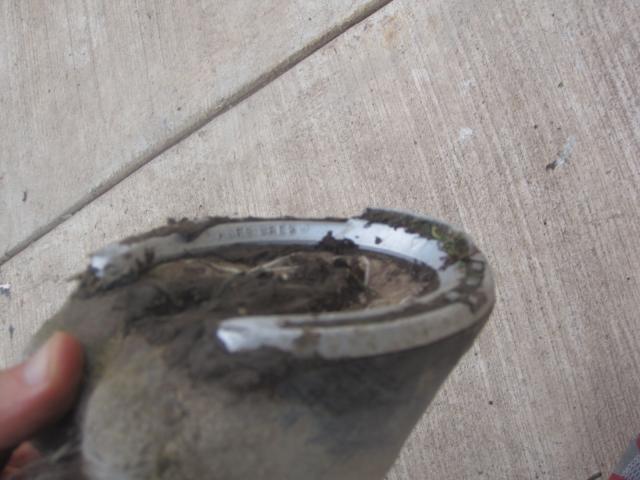 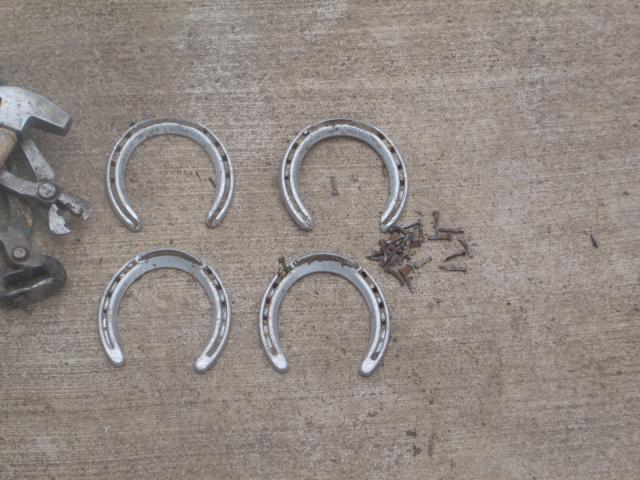 I removed the aluminum plates before I turned Clunk out. 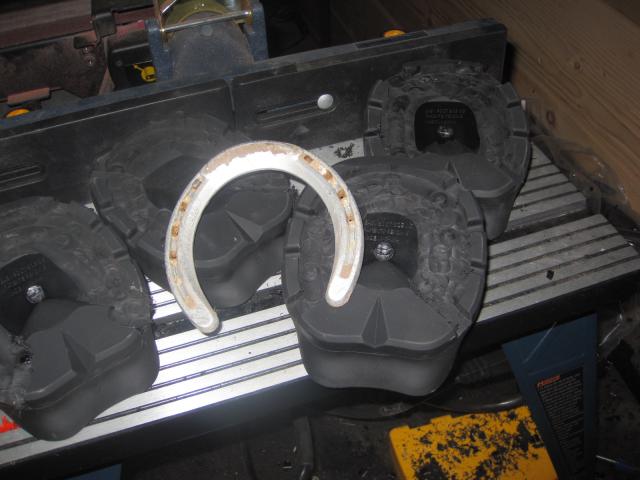 Modifying the Easyboot tread to mimic an aluminum racing plate: first prototype.
Weights of the aluminum race plates and the modified Easyboot Race shoe were taken after the Race shoes were modified. The average weight of the aluminum plate was 9.5 ounces. There were variances of + .1 ounces and – .1 ounces. These shoes had 1 race on them, on a soft racing surface, and exhibited little to no wear and tear. They were removed within three hours of finishing the race.

The average weight of the reconfigured EasyCare Race shoe was 6.5 ounces. After adding the appropriate amount of glue for proper adhesion, the final weight was 9.55 ounces. The variance was + or – .15 ounces. 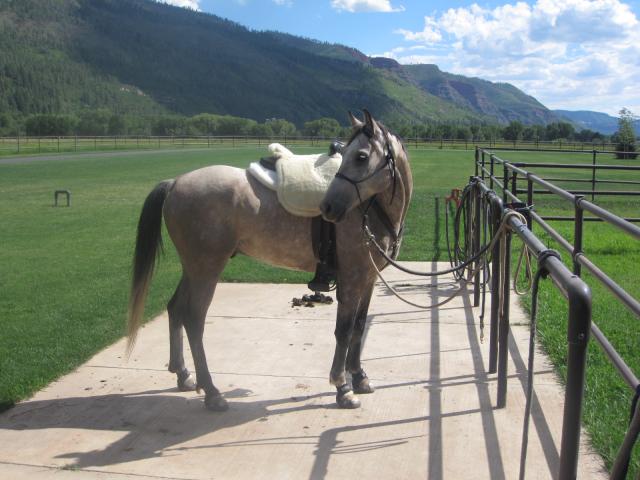 Clunk in endurance tack and Easyboot Gloves.  I did roughly two weeks of conditioning with him in the Colorado mountains after we purchased the horse. 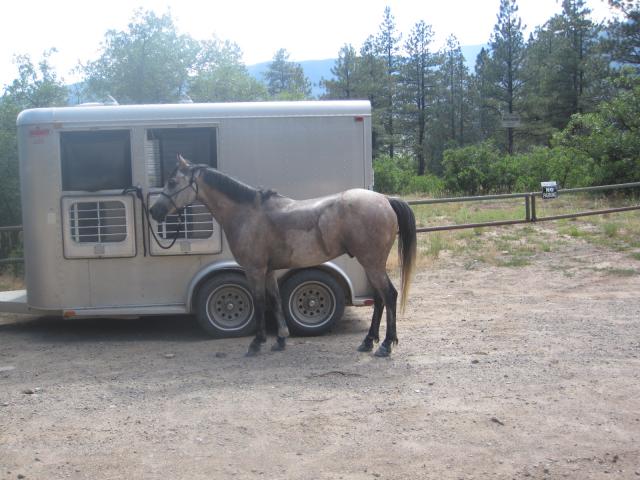 Clunk after hill repeats carrying 225 lbs.
During this process, we had been working with the stewards (race officials) at the Arapahoe Park Race Track in Aurora, Colorado. We discussed with them new Easyboot Race shoe and the prospect of racing Clunk in the new design on August 7th, 2011.  The stewards were initially very receptive to the design and thought it could be beneficial for many reasons.  They didn’t see any problems with the shoe and asked to see Clunk do an official workout the week before the August 7th race. 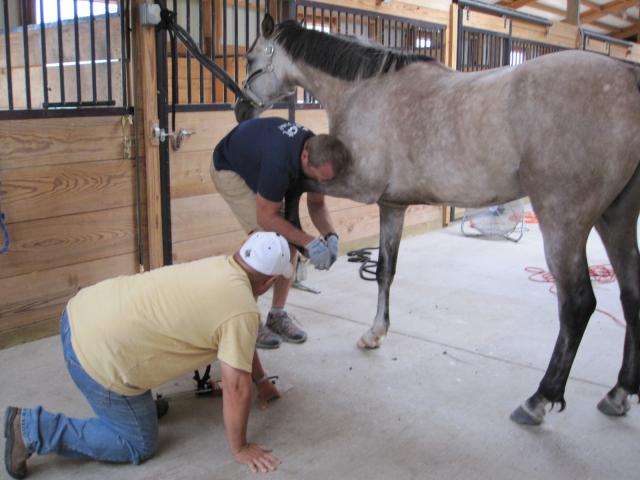 Steve Kulinski and I fit Clunk with Easyboot Race shoes before the event. 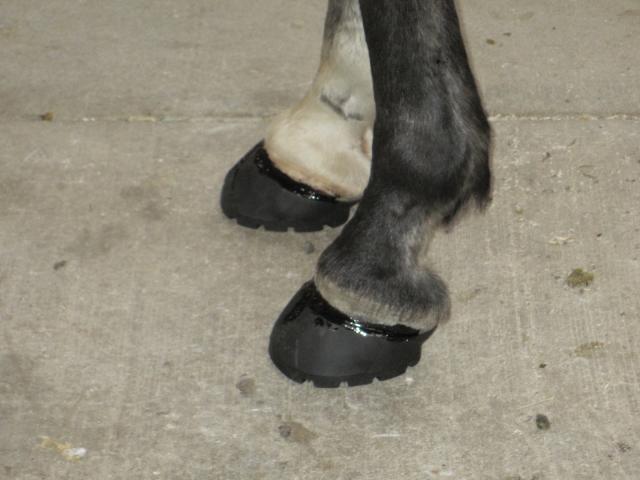 Clunk’s Easyboot Race shoes installed and ready to go.  A very thin upper flange is used to glue the shoes to the hoof.

To Race, or Not To Race?
Clunk’s race shoes were applied Tuesday August 2, 2011, in anticipation of the workout in front of stewards on Wednesday August 3rd.  Clunk did a flawless workout in front of the stewards, track vet and several jockeys.  The jockey was very impressed and said the horse felt more confident and stable.  The track vet had no objections and saw many benefits that could help track horses.The stewards, however, subsequently changed their opinion, informing us that Clunk would not be able to race on August 7th if he wore the Easyboot Glue-On Race Shoes.  They were unable to give a reason or cite a rule in support of their decision.
On Friday August 5th, we filed a formal appeal and asked the stewards and director for a reason and rule that would not allow Clunk to race in the new EasyCare hoof wear.  The director responded with a written response and that our new shoe went against rule number 7.608:
“7.608 – Bar plates may be used only with the consent of the Division Veterinarian. The commission may limit the height of toe grabs for any breed at a live race meet. Toe grabs with a height greater than the maximum set by the commission, bends, jar caulks, stickers and any other traction device worn on the front hooves of horses while racing or training on all surfaces, are prohibited. The horse shall be scratched and the trainer may be subject to fine for any violation of this rule. We thought about removing Clunk’s Easyboot Race shoes and allowing him to race in aluminum plates but decided to scratch him and stick to what we set out to accomplish.  We quickly finished a new mold that was exactly the same shape of the aluminum plate removed from Clunk’s hoof after he was purchased.” 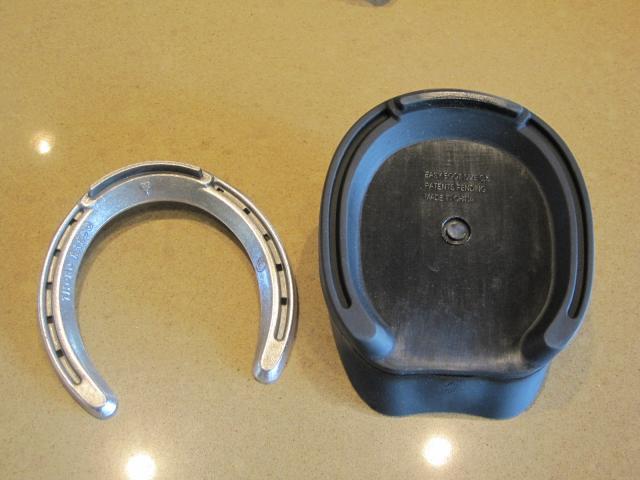 The Easyboot Race bottom surface mimics an aluminum plate but is made of urethane.  Patent applications are complete.  The photo above shows the finished Easyboot Race straight out of the mold: the exact pattern of the aluminum racing plate but molded in urethane.

Barrier After Barrier
Although Clunk was not allowed to race on August 7th, he remained entered in the August 21st Milemaker’s Classic race.  We believed that we could modify the Easyboot Race to be an exact copy of an aluminum plate and the stewards could not say it violated rule 7.608.  We continued to press forward and quickly finished a new Easyboot Race mold.  During the mold process we presented photos and drawings to the Arapahoe Park race director, Don Burmania, and the racing stewards. To our disbelief, Don and the stewards said the new racing plate still violated the 7.608 rule as it was a “Traction Device” and they would not allow Clunk to race in the new design despite the fact it was an exact copy of an aluminum plate.  On Wednesday August 17th, Don Burmania informed us via e-mail the following:”please be aware that we will be unable to provide you with suggested changes to the product to get it to conform to Commission rules. No matter what changes you suggest, it will not change the fact that the device is a traction device prohibited under the Rule 7.608. “Looking at Don’s written response, I’m especially confused that he and the stewards are unable to provide guidance and suggestions that would allow our shoe device to conform to the Commission rules.  And in the next sentence, Don states that regardless of the changes we make, it will not change the fact that the device is a traction device prohibited under Rule 7.608.  Confusing and frustrating.  If Don is able to make that statement, there are obviously some areas of the shoe that Don believes are a traction device.   Until EasyCare knows the portions of our shoe that Don and stewards believe don’t conform to commission rules, Don is correct stating that we will be unable to make changes.  It will be difficult to make changes if we don’t know what to change and what elements of our shoe violate a rule.

We can make many changes: we just need to know what is allowed and what isn’t.  Here are some examples. 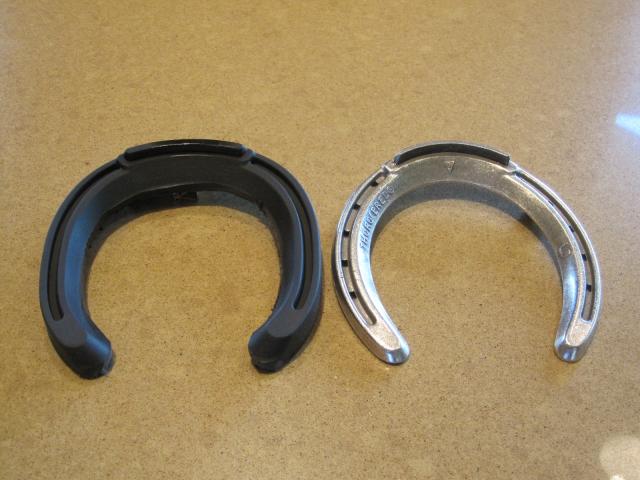 The Easyboot Race sole with center and glue-on walls removed next to an aluminum plate.  Does this design violate the traction rule?  Shoes can be made of urethane and colored black? 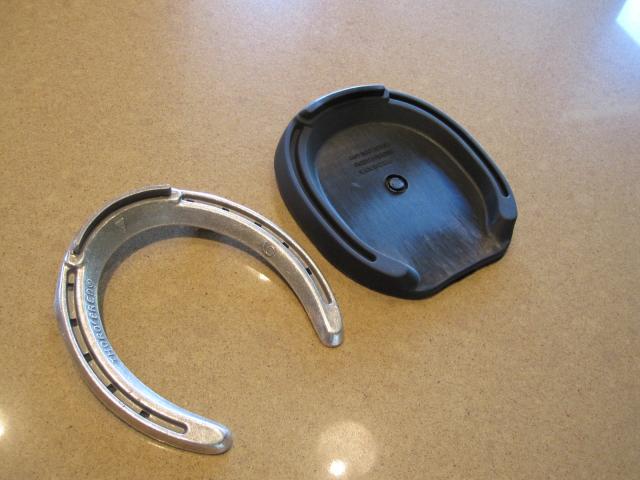 Easyboot Race with center pad next to an aluminum plate. Does this design violate the traction rule? Shoes can be made of urethane, colored black and be used with pads? 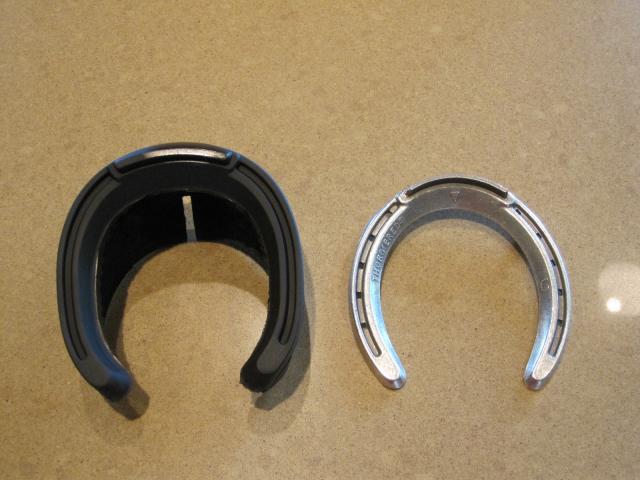 Easyboot Race with glue-on cuff next to an aluminum plate. Does this design violate the traction rule? Shoes can be made of urethane, colored black and glued-on with a cuff or clips?

Easyboot Race with center pad and glue-on cuff next to an aluminum plate. Does this design violate the traction rule? Shoes can be made of urethane, colored black and glued-on with a cuff or clips? 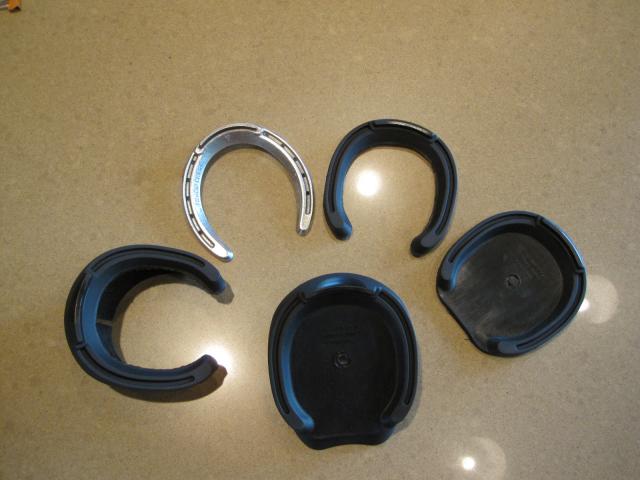 All the options available with the Easyboot Race pictured next to an aluminum plate that conforms to the traction rule.I have to say it’s been a frustrating process.  It’s hard to see horses being shipped off to slaughter when we are fighting to race a horse in a product that we believe will help prolong the racing careers of thousands of horses.  It’s difficult to see state employees that are paid with tax dollars make arbitrary and capricious decisions.  Polyurethane glue-on racing shoes are already out there and being used by some of the best horses and trainers in the sport.  Big Brown ran to victory in the 134th Kentucky Derby wearing glued-on poly-flex shoes. I hope to pull some of the horses with foot issues off the slaughter wagons at various tracks and fit them in the new Easyboot Race shoes.  I would like nothing more than to show the racing public that a horse heading for a processing plant in Mexico was saved and winning races in Easyboot Race shoes. We believe in rules and intend to follow the rules.  On the other hand it’s hard to follow rules when state officials can’t explain what portion of a rule is being broken. We will continue to fight and believe the Arapahoe Park officials have made the wrong decisions.
Do you believe the track industry could benefit from alternative hoof wear and more urethane shoe options?  Do you have a horse that would be a candidate for the new Easyboot Race shoe?  We would love to hear your thoughts and feedback.
Garrett Ford