Spring must truly be here. This is the time of year you trim feet and then look at them a week later and think “Hmm, did I not trim enough off?”. No guesses as to what I’m going to be doing this weekend.

With spring’s arrival we can hope for an end to the eternal slop… provided Uno refrains from trying to extend it. During an unsupervised moment last weekend, he yanked the water trough off its foundation and flooded the nicely-drying paddock several inches deep in water. In the process, he also dumped out all the mosquito fish – necessitating Lucy spending 30 minutes fishing them out of muddy puddles. 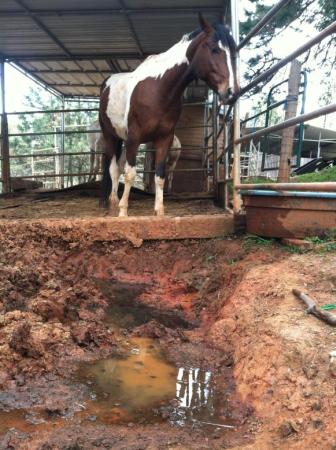 Uno acting innocent (and then spoiling it by demonstrating what he did with his teeth while I was standing there watching).

Then we got another week of rain which turned the rest of the paddock’s red clay back into slop and, voila, pone-feet turned into globs of mud, making trimming and booting a chore.

For this reason, the last two training rides we’ve done were barefoot. Unfortunately, because of all the moisture, it would appear that Fergus and Uno aren’t particularly comfortable barefoot right now – from their short-striding, I suspect squishy heels. Luckily this time of year there’s an abundance of grass on the side of the trail, so we spent our entire time riding on that: 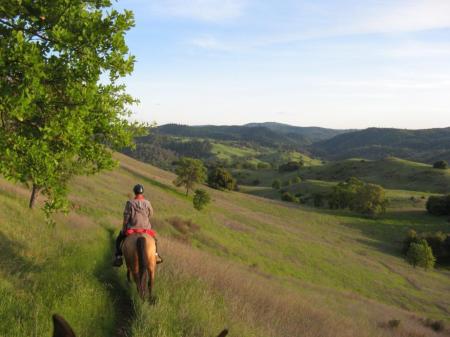 
Not having done much cross-country riding, I found trotting at speed through deep grass a little alarming, but was surprised that, no, the horse didn’t automatically do a face-plant when performing this routine skill. The only time riding on the grass verge wasn’t acceptable was when it was on the drop-off side – erk – at which point we practised leg-yielding (or side-thumping in the case of Uno, who definitely needs more refinement… I can see more arena-work in our future).

Spring’s arrival has also placed us squarely back into conditioning-mode (Fat Boy puffs way too much when asked to do more than mosey). Both horses are off to Washoe Valley at the beginning of May: Uno to hopefully complete two days of 50s, while Fergus will do the 50 on Day 1 (this will be his and Patrick’s first ride in over a year).

Day 1 of Washoe Valley covers some of the same trail as Virginia City 100, including the infamous SOBs – a set of three short but very steep, rubbly V-shaped canyonlets. Those always give boots a good work out, so I’m going to have to make sure whatever footwear we opt to use is very, very secure. 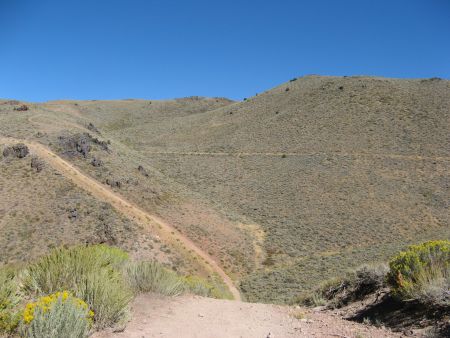 Right now, I’m weighing up the pros and cons of using Gloves with athletic tape, versus glueing boots on all 8 feet. Although the glueing isn’t my favorite activity, it’ll probably be worth it for the two days for Uno – and if I’m glueing him, I might as well glue Fergus as well. The trick as usual, given my current ludicrously busy work-schedule, will be finding a suitable time to do it (which probably means I’ll be glueing upon arrival at the Ride on Friday afternoon).

At the time of writing this, I still have nine days to figure it out so we’ll see how things work out.