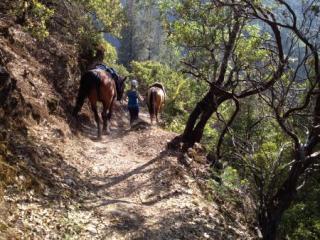 The narrow, drop-off trail a few miles out of Deadwood in El Dorado Canyon.

In the middle of May it was time for the Annual Tevis Fun Ride. This weekend is spent horse camping at the Foresthill Mill Site (the 68 mile vet check on the 100 mile endurance ride) and joining a bunch of like-minded folk to ride portions of the Western States Trail.

Many people come to this event in order to get themselves and their horses ready for Tevis – the more the horse knows the trail (especially the part you will be riding at night), the better. My Tevis-entered friend wasn’t able to bring her own horse down, so she borrowed Fergus for the weekend to familiarize herself with the trail’s twists and turns.

This left me with either Hopi and Small Thing to ride. Both were capable, but neither was up for 35-40 miles in one weekend. So I ended up bringing both and did a day on each of them.

On Day 1, we trailered 45 minutes from Foresthill, down an 8 mile dirt road in the middle of nowhere, to Devil’s Thumb – around mile 54 of the Tevis. Because of lack of access, usually the only way to do this is to ride out and back.

This was Hopi’s day to be ridden. He’s still pretty green, but coming along in leaps and bounds, demonstrating a level-headedness I wasn’t sure he possessed. I knew that we’d be hand-walking most of the more alarming sections of drop-off trail, so figured he would get lots of practice at not being a klutz on the technical trail.

We were also joined by Tami Rougeau and the lovely May.

All three participants were booted – May sporting Glue-Ons, Fergus in Glue-Ons in back (leftover from Washoe Valley) and Gloves in front, and Hopi in a mish-mash of leftover Gloves from the bottom of the boot bucket. 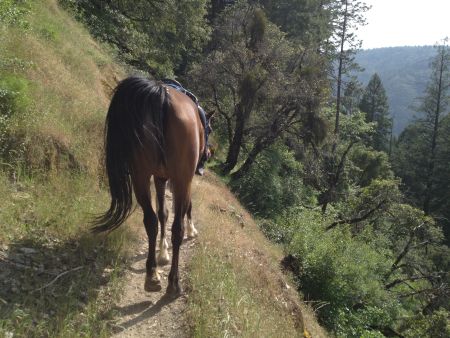 Weenie that I am, I would have been hand-walking this section even if I wasn’t riding a green horse. 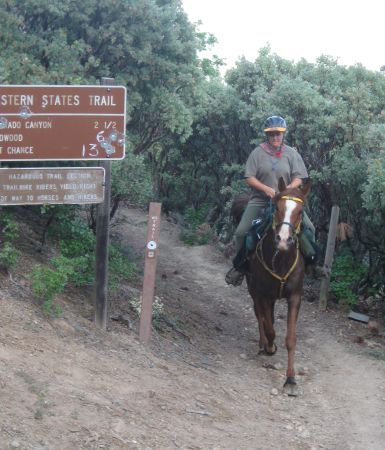 Slowly working our way towards the omnipresent goal of one day completing Tevis, Hopi visits Michigan Bluff for the first time. 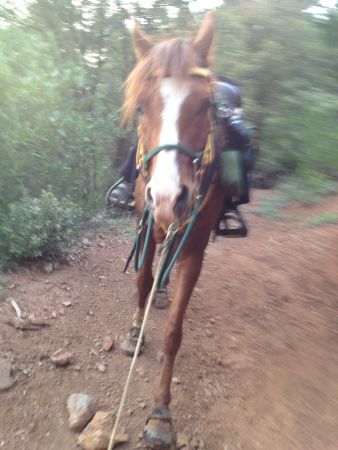 Hopi stomping along, learning what to do with his feet. 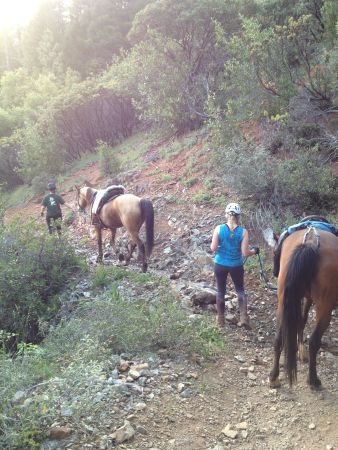 Renee and Fergus, Tami and May at a tiny creek in Volcano Canyon.

We had a most excellent day and I was thrilled with how well Hopi dealt with everything. He’s still klutzy, but the way he’s keeping up with his learning curve is very encouraging.

For Day 2 I dropped my trailer at the end of our ride and caught a lift back to Foresthill. It was Small Thing’s turn and although everyone else tacked up their horses before the trailer left, I didn’t trust him not to rip half his tack off while standing tied to the trailer, so opted instead to wait until I got back to clothe him. Of course it was only then that I realized I’d left his tiny short girth in the trailer 30 minutes down the road <sigh>. As luck would have it, Tami had a short girth and we were in business again. 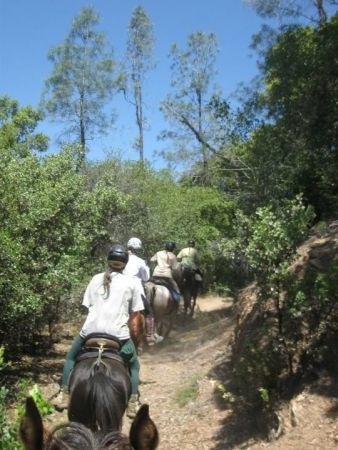 We ended up with a row of five booted horses – the two in front are Destiny and Breezy – both of whom wear Original Easyboots over shoes; followed by May in her Glue-Ons; Small Thing in his Gloves; and Fergus in his Gloves. Between them, the five horses have nearly 9,000 miles of endurance competition miles. Small Thing was the odd one out, having not yet managed to start a ride.

This day was over 20 miles – and warm – and I wasn’t sure how well Small Thing would cope. As it turned out, he coped admirably, bopping down the trail with much enthusiasm… in fact, getting more enthusiastic the further we went. It seemed that the more pathetic I felt, the faster he went. 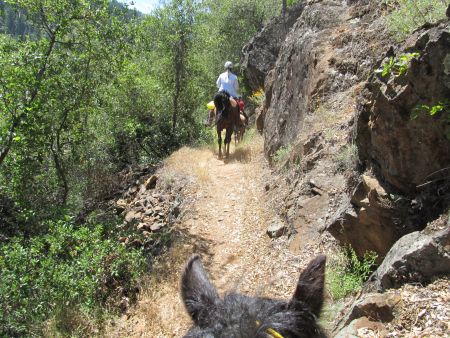 California Street Loop about two thirds of the way between Foresthill (mile 68) and the next vet check, Francisco’s (mile 85). This is the section ridden in the dark by all but the front runners during Tevis. 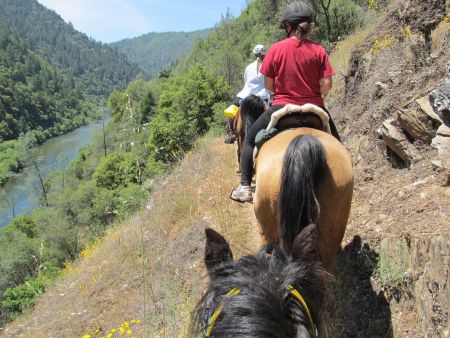 I trusted Small Thing not to do anything stupid – so of course he tried to turn sideways to snack along this section, causing his back feet to fall off the trail, and giving me a mild cardiac arrest. 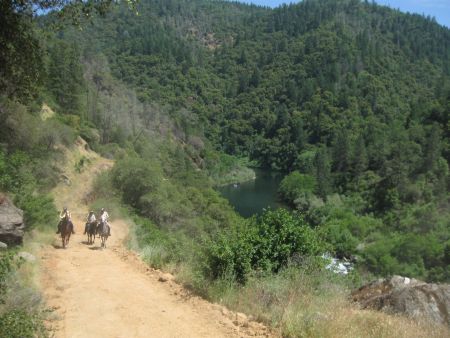 Finally off the narrow singletrack and nearly at Francisco’s. This is the Middle Fork of the American River. I had thought that Small Thing would be tired by the time we got to this point, but instead he took off cantering when we got to the river road. 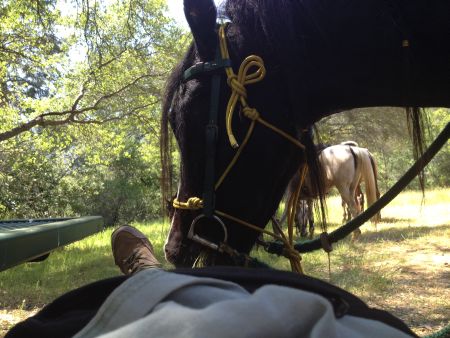 By the time we reached Francisco’s, I was suffering from heat stroke and wanting nothing more than to lie down in the shade for ten minutes and regroup. Small Thing helped.

The crowning glory of the day was Small Thing marching up the 1,000′ climb to Driver’s Flat at the end of the ride, showing no signs of being remotely tired, causing me to reassess his capabilities. Hmmm, maybe he could do 50 mile endurance ride? (never mind that I’m not yet capable of riding 20 miles on him without wilting).