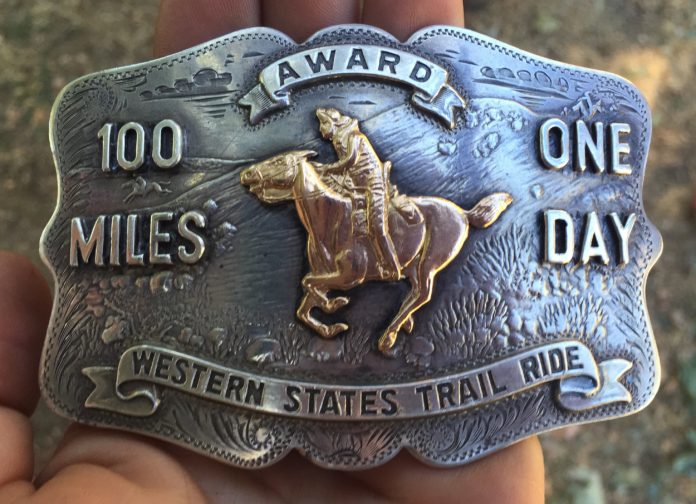 There are many different ways we can experience a world class equestrian event: as a spectator, as a volunteer, as a competitor, and even for some, as a judge. I’ve been honored to experience several of these kinds of events as a competitor and also as a volunteer, and they all overflowed with feelings of excitement and fulfillment.  However, none of them compare to my experience at The Western States Trail 100-Mile Endurance Ride: The Tevis Cup, just last week.

The Tevis Cup made it to the top of my list so quickly and easily because I was able to experience the ride from two very different, yet equally amazing perspectives: in the early part of the week as a member of the Easyboot Elite Team, and then during the ride as elite crew! 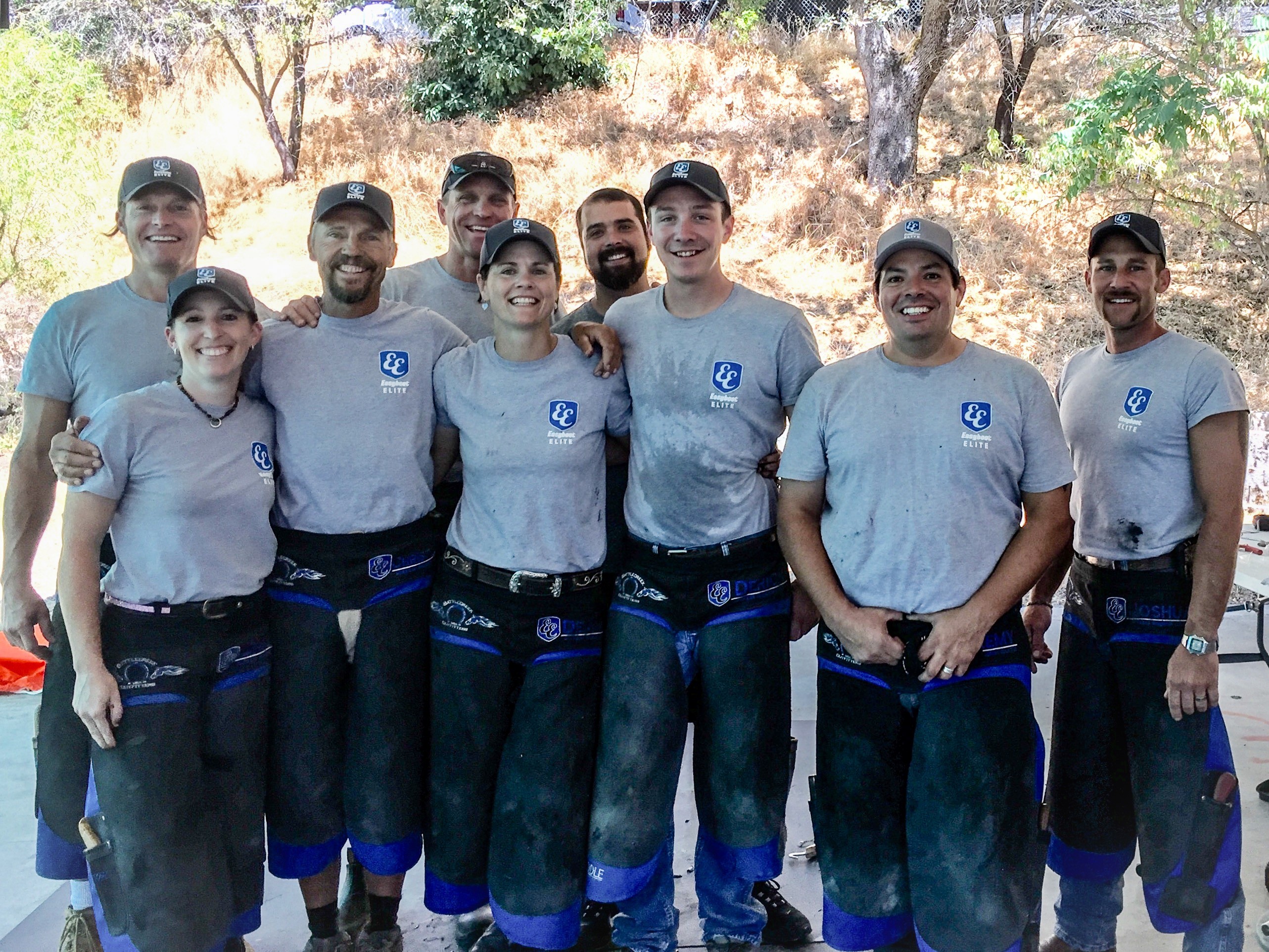 Being part of the Easyboot Elite Team was a phenomenal experience.  Starting a few days before the ride we helped about 50 horses, that’s somewhere around 200 feet that we glued boots on!  It was a blast.  The energy was high from riders and Easyboot Team members alike!  We were here to help these horses have the best ride they could possibly have with the best hoof protection our industry has to offer for such a tough event.

Every horse I helped with their hoof protection I felt like I was part of their teams.  There were six of us on the Team, plus Garrett Ford and Christoph Schork coaching.  Team members included farriers: Josh Bowles, Jeremy Ortega, Deanna Stoppler, Derick Vaughn, Pete Van Rossum, and myself, each worked in teams of two gluing.  One partner would be responsible for foot prep: buffy, scuff, wire brush, torching, and dremeling. The other partner would be responsible for gluing: prepping the boots, applying Sikaflex and Adhere to the boots, facilitating horse handling, work space management, and boot application. 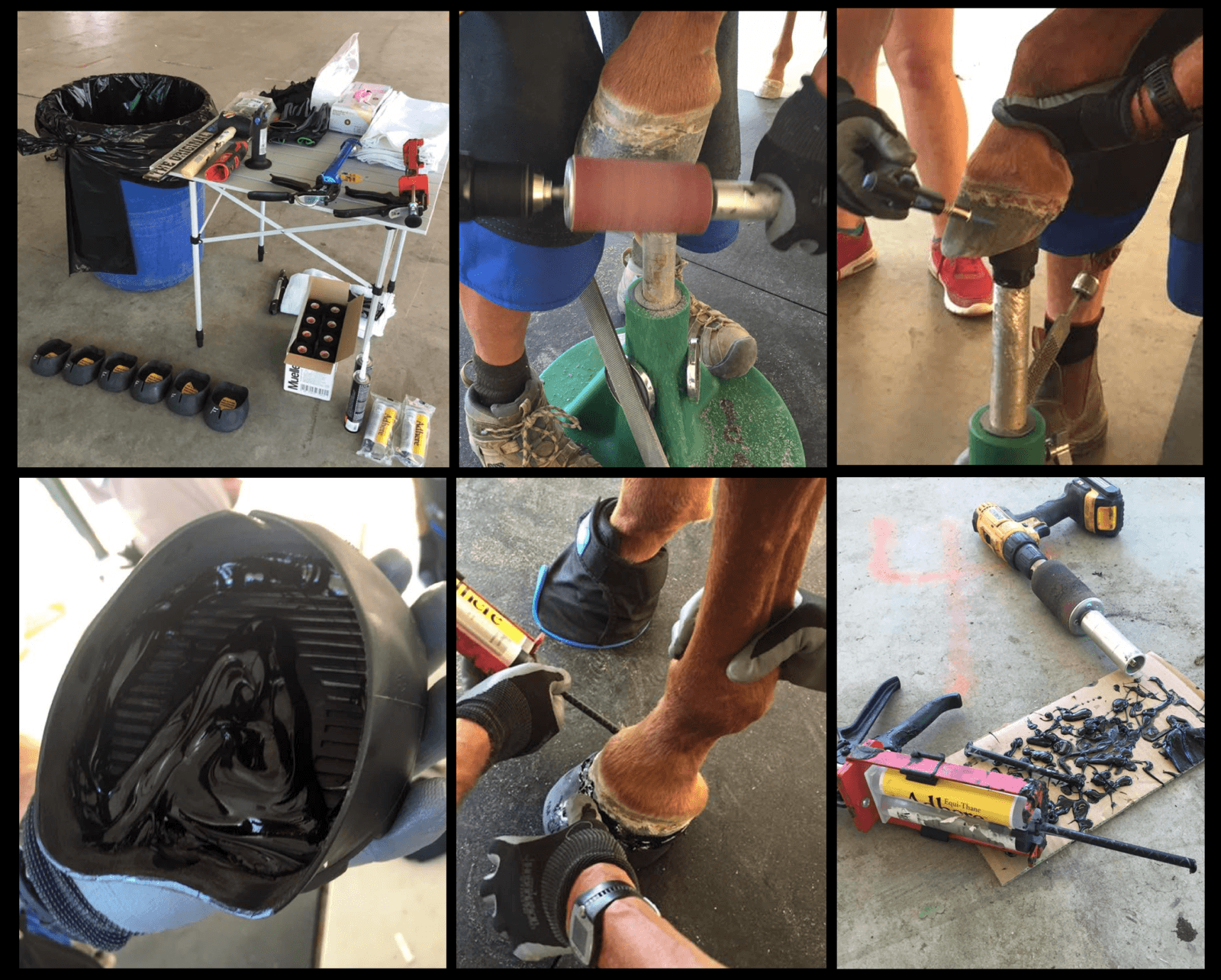 Boot size selection was typically done by both partners, which was surprisingly easy considering the horses arrived with their feet already trimmed. As a group the Team Members are used to fitting boots to our own trim, so to fit boots to someone else’s trim was an interesting process.  As a whole the horses arrived with very tidy trims and good feet which made boot selection easy.

We took turns with each responsibility, one prepping and one gluing each day. The goal was to get really good at one part of the process on the first day, then switch roles, and do the other part of the process the second day.  The repetition of one part of the process helped ensure consistency and excellence in application.   I was partnered with Jeremy Ortega, fellow farrier and friend from California, who had also been on the team last year.  With his previous experience he helped me get up to speed quickly on the tiny details that make or break success at a ride of this level.  We had a great time together!

While my work gluing was over, the best was yet to come!   I couldn’t come all the way to California to help everyone get ready for the ride and then not stay to watch! Even better, I was honored to be part of ride crew for Garrett and Lisa Ford.   What a phenomenal group of people! 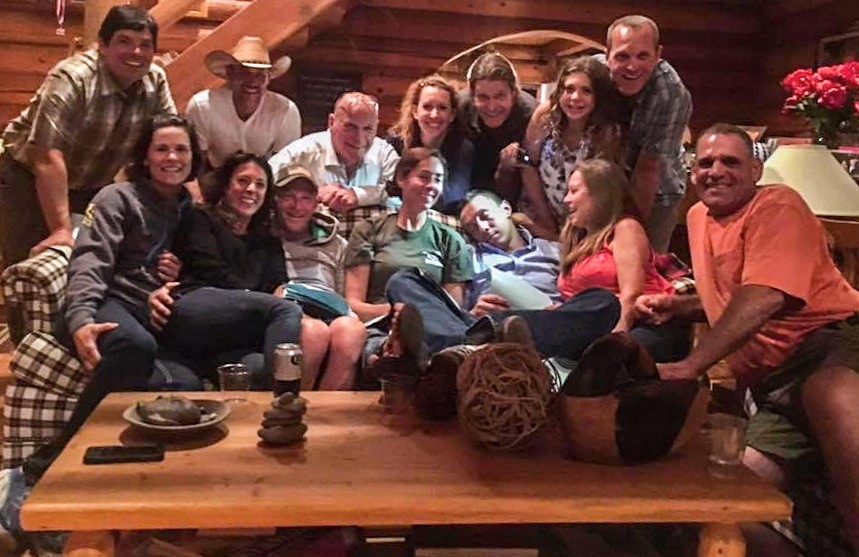 Someone said to me that crewing for Tevis is harder than riding it, well this group made it seem pretty easy.  Yes there were many stops, and yes getting in and out of some of them required a lot of physical labor by the crew, however, talk about extremely well organized.  The Ford’s crew operated like a well oiled machine, it was amazing to be a part of it! 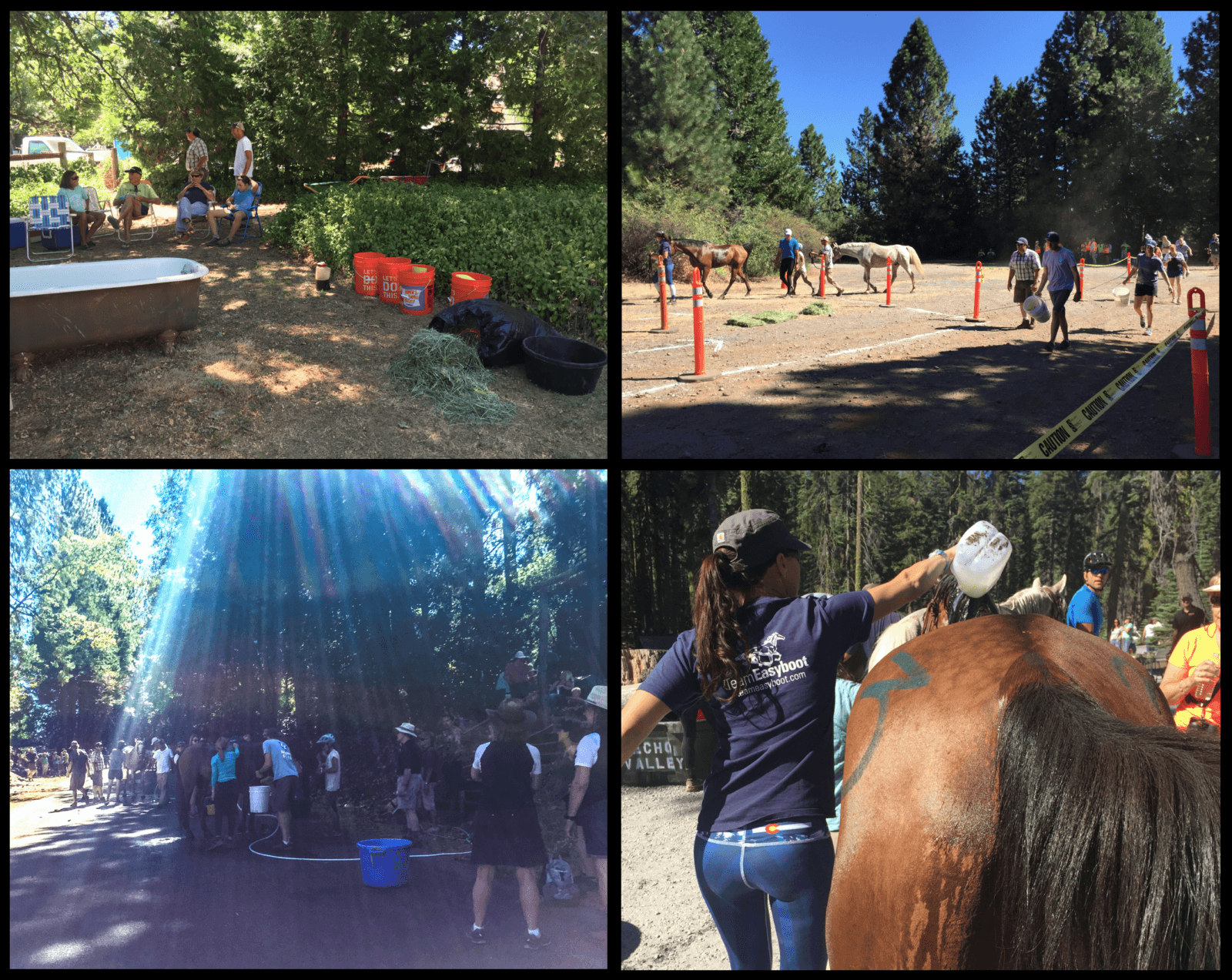 And what a Team to crew for!  Garrett and Lisa crossed the finish line hand-in-hand as they have for the last several years, Lisa placing 2nd with her horse GE Cyclone, and Garrett 3rd with The Fury. Lisa’s horse even went on to win the Haggin Cup.  Yahoo!  I felt like I had won it myself, being part of the TEAM.

I’m still “riding high” from the week at Tevis. Garrett asked me at the end, “What do you think?  Not the gluing, about the ride”?  I thought for a moment and responded, “It’s amazing, every detail matters, the preparation, the training…but at the end of the day, it’s still an endurance ride, ridden one step, one mile, at a time, hold to hold, just like any other ride”.  Now I want to ride Tevis myself, even more!

Everywhere we went, Kevin Myers was missed…”IR4KM” = I Ride For Kevin Myers was spotted stenciled on horses, people and things, and t-shirts were abundant saying “We ride with Kevin”.  We know he was there with us in spirit! 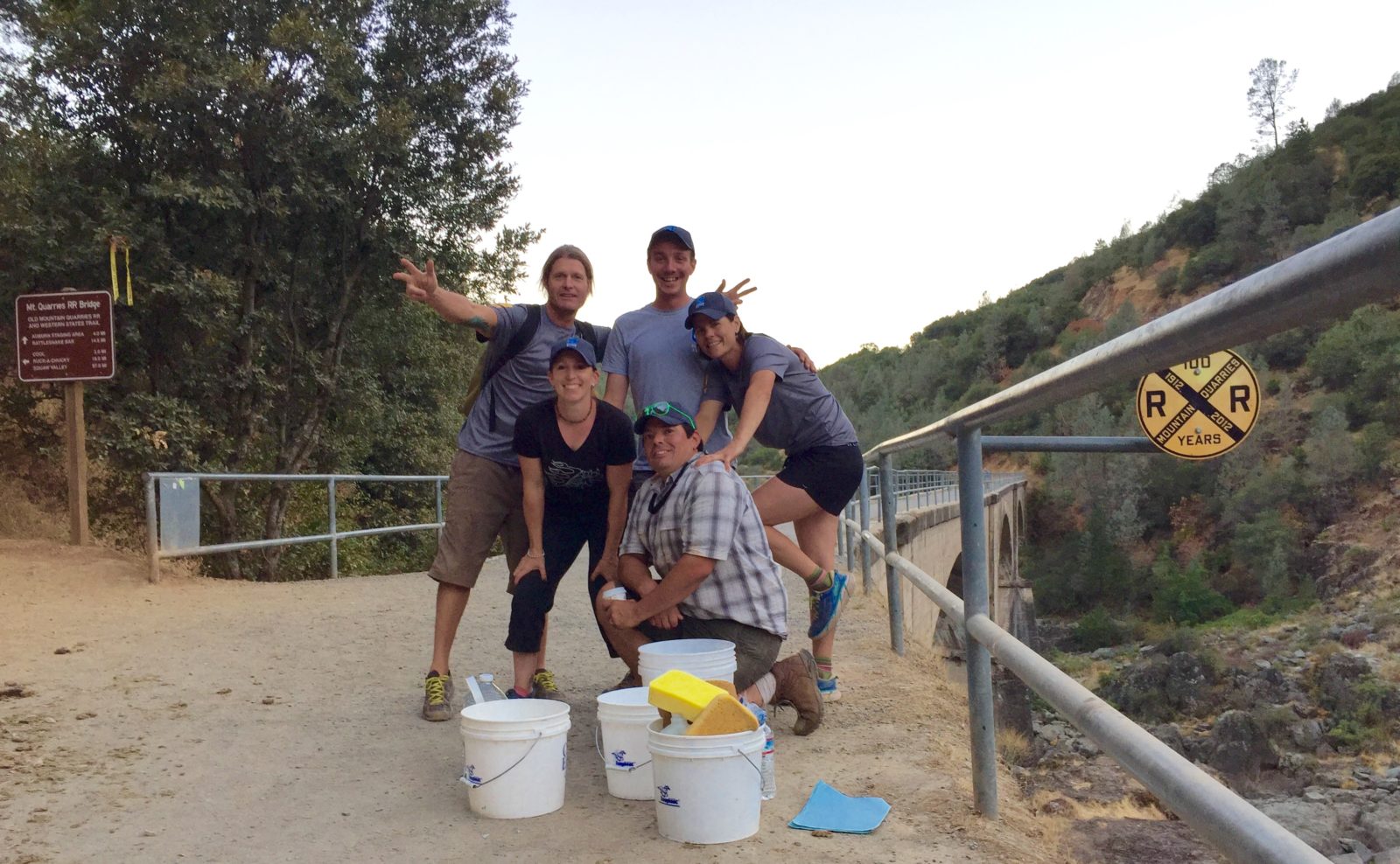 The Easyboot Elite Team Members who stayed to crew for Tevis.

I’m grateful for the opportunity to spend so much time with some of the greatest people in the world doing something we all love, helping people excel with their horses!