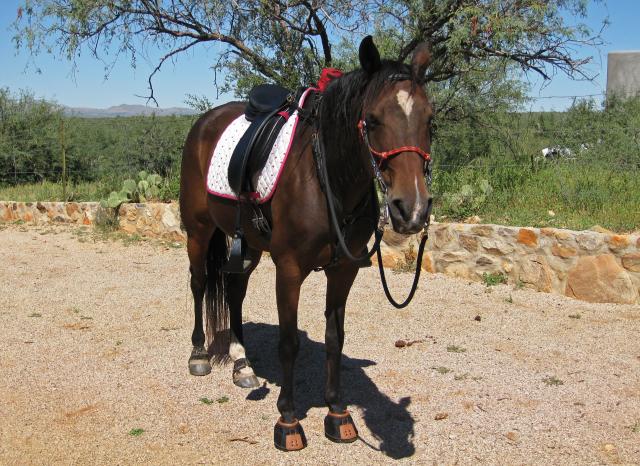 I have used Easyboot Gloves since they were released and absolutely love their lightweight and sleek design. I’ll admit when I saw the Easyboot Trail, I was skeptical and couldn’t help but compare them to my beloved Glove. Even though they are light, they aren’t as light as a Glove. Although they are sleek for a boot, to me they looked downright clunky next to the Glove. After becoming a customer service representative at EasyCare, I knew I needed to ride in the Trails since they were our most popular boot in 2011. So for the past three months I have been using the Trails on Cal, my Tennessee Walking Horse cross. Cal has always been a sensitive horse, the type that would gimp over rocks even when he had shoes on. The Trails were a breeze to put on and I was absolutely amazed at how comfortable he was in them, even more so than when I rode him with Gloves on the front. Now I see what all the fuss is about; the Easyboot Trail really is amazing!

The top concern I hear from prospective customers is if the Trail will cause rubs. The Trail needs to be broken in, just as you would break in a new pair of hiking boots. Your first few rides should be thirty minutes to an hour of walking and light trotting/gaiting; this is to ensure the fit is correct and there is no chafing. I decided to go against recommendations to see how they would perform if they weren’t broken in.  My first two rides were 5 and 7 miles over the course of a weekend. On the first day, I checked for rubs every 30 minutes and found none. The second day, I checked at 4 miles and saw a rub the size of a pencil eraser. When I checked again at 6 miles the area had not changed. After the ride, Cal was not at all sensitive at the site of the rub and the area was so small that it would not show up when I tried to take a picture of it. Since that first weekend I have ridden over 50 miles in the Trail averaging 5-10 miles per ride. The only time I observed a rub was on that second ride and it was because I had not properly broken the boots in. If you are concerned about rubs, you can purchase Gaiters to protect the pastern area. But if the boots are a good fit and properly broken in, Gaiters generally aren’t necessary. 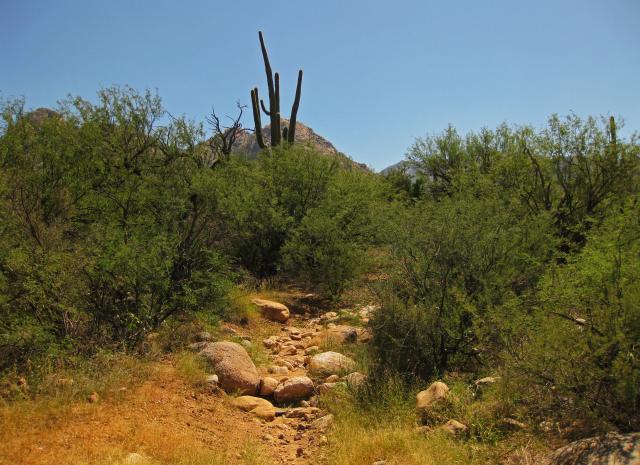 Catalina State Park, the perfect testing grounds.
One of the things that really amazed me about the Trails was how well Cal gaited in them. Being a gaited cross, he is capable of doing a running walk and a trot but he usually prefers to trot. With the Trails however, he gets into a real nice rhythm and I can honestly say it is some of the most consistent gaiting I have felt from him. The aggressive tread pattern performed wonderfully when riding in and out of the technical rocky washes. For anyone who thinks the Trail is “too good to be true”, it isn’t. The Trail is THE boot for casual riders because it is easy to put on and performs well.

What’s the Difference Between the Trail & the Trail Original?