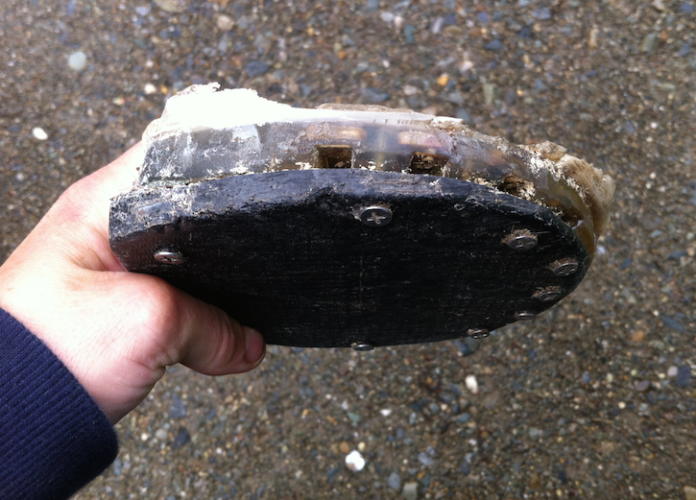 Adding support devices to chronically lame horses can be very difficult and many times nailing on a shoe or holding up a foot for 3-5 minutes while glue cures is not an option; however, with the EasyShoe and EasyCare’s glue on protocol I have found it much easier to offer support to horses without adding concussion to the hoof (from hammering) or extended glue cure time.  Instead, I can prepare the hoof for the glue on shoe or shell and once applied, set the hoof down for weight bearing instantly.  Sigh of relief for the horse and farrier.

Recently, I added a new horse to my books who presented lame on both front feet, particularly lame on the right front—pointing the foot and reluctant to stand square.  The horse had underrun heels and excessively long toes.

The owners suggested that the horse had suffered from lameness for many years and their only requirement was to keep him as comfortable as possible. I was able to trim the horse and remove the lever on the toe, creating a more effective base of support; however, he needed more mechanics via a shoe to be comfortable.  I requested x-rays to effectively shoe the horse.

According to the vet, the horse suffers from severe navicular and pedal osteitis in both front feet, particularly the right front. The X-ray is one week into a trim and four weeks pre shoeing. These are not high quality X-rays but you can see the obvious broken back angles and lack of support in the caudal portion of the feet. 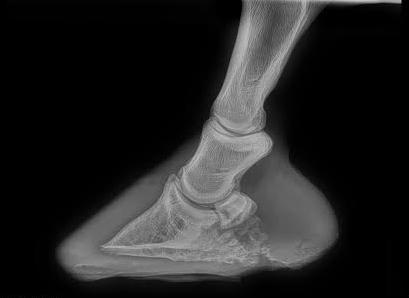 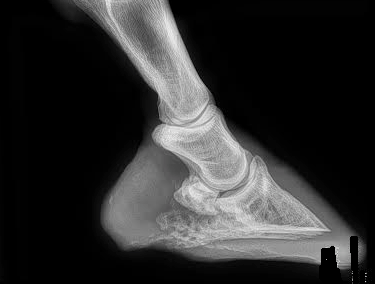 I decided to leverage test the horse to determine if a wedge would make him more comfortable and to decide what position to place the wedge on the foot. The horse responded positively to a wedge in the caudal portion of his hoof (to be expected) and would not weight his foot with a wedge in the toe region or on either medial/lateral sides.

I decided to shoe the horse in the EasyShoe Performance NG, using Vettec Adhere, and add a wedge if necessary.  He responded well once shod in the NG but still pointed his right front foot and continually moved it trying to find a comfortable spot.  I applied a 3″ wedge pad to the groundside of the NG, using 3/8” screws to hold the wedge in place, and packed with Vettec Equipak CS, making sure not to pack the caudal portion of the foot until the inflammation in the foot subsided (most likely at the next scheduled shoeing). The horse responded positively to the support and for the first time since I’d met him stood square. 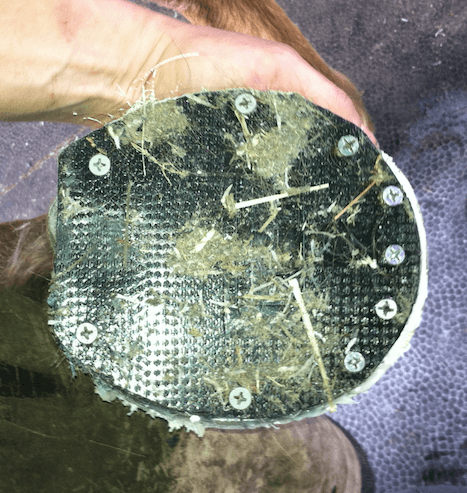 EasyShoe Performance NG with a 3″ wedge pad screwed to the ground side of the shoe using 3/8″ screws. 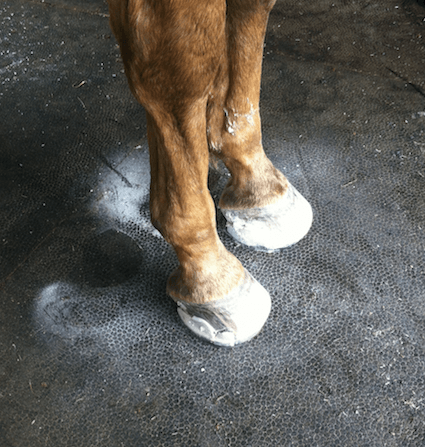 Standing square for the first time since I started working on him. 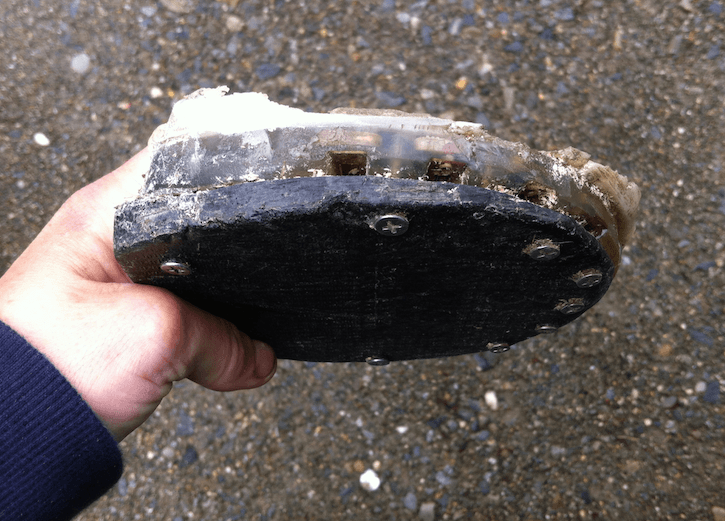 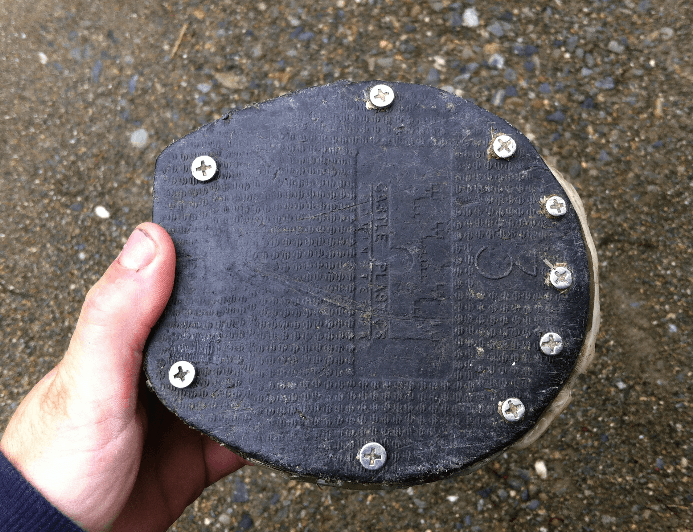 EasyShoe Performance NG with 3″ wedge pad (this photo displays the shoe after it was pulled, six weeks later).

Six weeks later, at our next shoeing, I decided to remove the 3″ wedge and create a glue wedge to the base of the EasyShoe Performance. The inflammation in both front feet subsided significantly so I felt the horse would do well in a smaller wedge and could tolerate Vettec Equipak CS packing in the entire caudal portion of the foot. 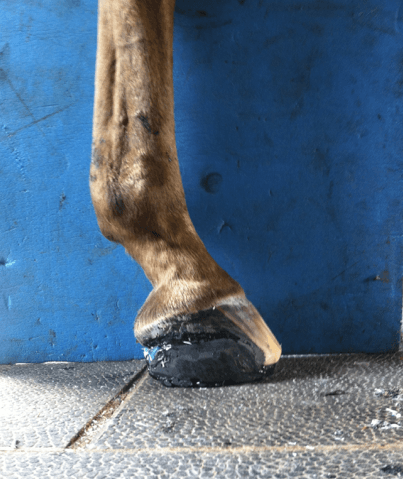 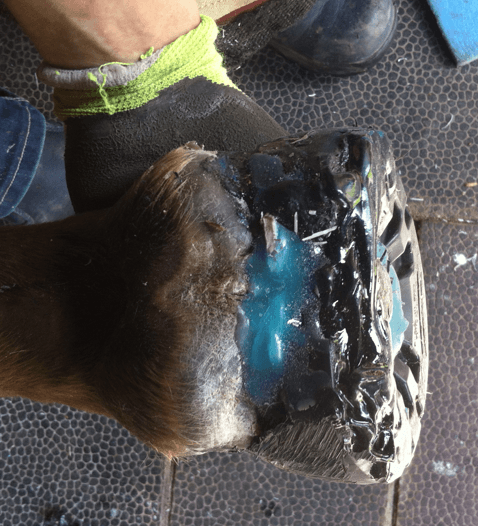 Second shoeing with 3″ wedge pad removed.  Shod in EasyShoe Performance, packed with Vettec Equipak CS, and build a small wedge with Vettec Adhere on the ground side of the shoe.

The exciting part about this shoeing was that the horse could put weight on his right front, the worst foot, and hold his left front forward on the stand!  He was unable to do this prior to the first shoeing with the 3″ wedge pad.  I was super excited that the inflammation had gone down enough for him to get some weight back on the right front, allowing the left front to rest. 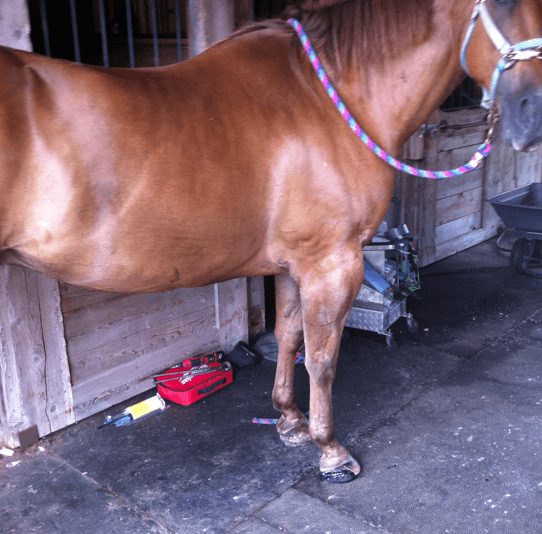 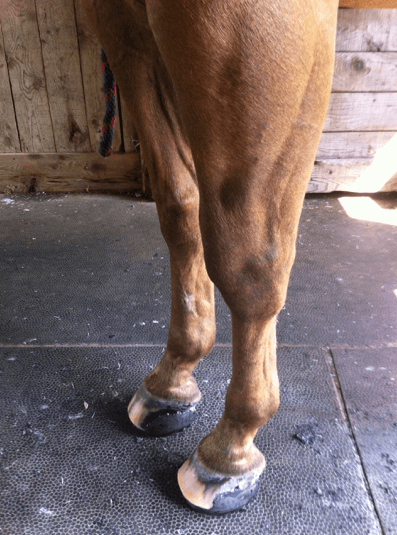 Still standing square since his first shoeing and with a little less wedging.

It never ceases to amaze me how additional support, mechanics, and a bit of creativity can help a chronically lame horse function.