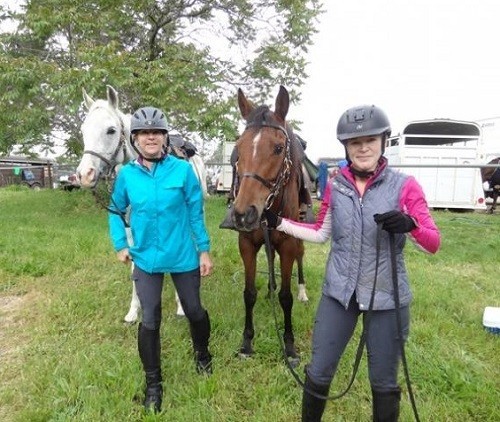 The American River Classic started at 5:30 am – an absurdly early hour for a 50 miler, in my opinion. I prefer a more civilized 7 am start. It wasn’t like I had anything else planned for the day. First of all, it was still dark. Second, it was cold. My riding partner Jenni Smith and I positioned ourselves at the front of the group lining up to start. We knew the trail well. Ahead of us were 25 miles of single-track along the American River to the first vet check at Rattlesnake Bar and then continuing on to the lunch stop at the Auburn Overlook. It had rained steadily the day before and we knew the footing would be challenging. We did not want to get caught behind slower-moving horses with no opportunity to pass. That makes us nuts.

The ride started along a rocky dike. All around me the sound of steel shoes hitting sharp rocks rang out. An occasional spark lit the way. The controlled start continued for several miles as we wound through a network of trails and roads leading to the Pioneer Express Trail. I heard the familiar skid of metal shoes on wet asphalt behind me. Glad that wasn’t me!

Once we were cleared of the controlled start, Jenni and I moved out. The narrow, winding trail was a network of puddles, which our horses thought would be better to jump and dodge. That made for some dicey moments. The weather report convinced me that the previous-day’s storm had passed and so I saw no need to wear rain gear. Instead, I opted for my running shirt, my cycling shirt (because the pockets on the back are handy) and a lightweight down jacket. Our crew chief, Bob Sydnor, suggested that I pack a change of clothes for every vet check. I didn’t heed his advice and later regretted it. 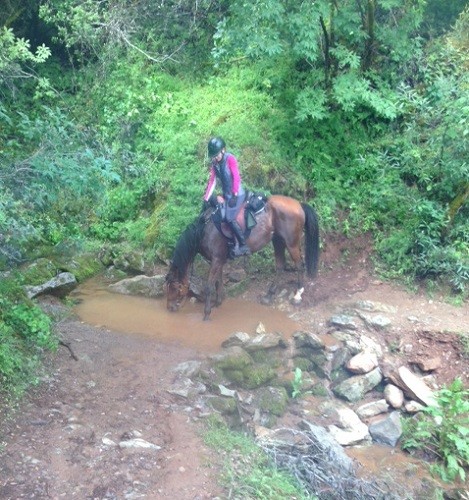 The Pioneer Express Trail from Folsom Lake to the Overlook at Auburn (the Tevis Cup finish) is narrow, challenging and OVERGROWN. I forgot about this. Five miles into the ride and already I was soaked through all three layers. We sped along, jumping puddles and ducking through water laden overgrowth that included ample amounts of poison oak. All this, combined with a section of trail called Cardiac and Cardiac Bypass, made for an interesting ride.

I had applied our Easyboot Glue-Ons on Thursday afternoon, fully aware of the forecast. Jenni and I discussed the challenges we would have in the wet conditions. We knew we would have to be very cautious. There was also the issue of the amount of water we would be riding through. This ride was going to test my gluing skills. Despite the puddles and some hair-raising turns, the boots performed exceptionally well. We came into the lunch stop at the Overlook in the top three with Mark Montgomery on one of his Mustangs. Mark’s horses are steel shod, but he’s a fun and interesting guy to ride with, and I like his horses, and so I can overlook the steel shoes.

We vetted through and headed toward the crew area that Bob had so thoughtfully set up for us. He presented us with our dream beverages: An extra hot soy latte for me and a soy chai latte for Jenni. 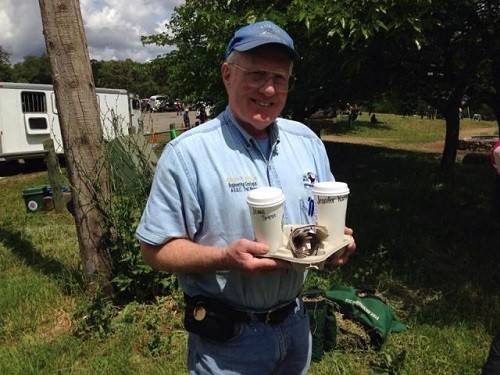 Bob proceeded to give us a show-and-tell of all the food and beverages he’d brought for us, which included at least seven different kinds of beverages, mostly carbonated, including what Bob referred to as “girl-sized” ginger ale. He had everything from chocolate-covered raisins (sorry Bob I don’t eat chocolate or sugar) to biscotti (sorry, no gluten either).

Jenni and I looked at each other and burst out laughing. 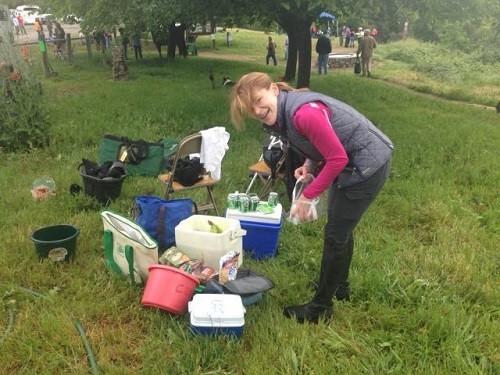 The horses were doing fine but I was freezing in my wet clothes. The ride is a point-to-point and my rig was still back at the start. Therefore, I had no dry clothes to change in (because I didn’t listen to Bob’s advice). I spotted Becky Hart and Judith Ogus nearby. They were seasoned veterans; Judith would have something dry for me to change into. I coerced her into giving me a purple rugby shirt and a bright turquoise rain jacket.

The afternoon loops were drier and we were able to move out, even cantering frequently. After the third vet check, it was a few miles to the Tevis Trail at Hwy 49 crossing, then over No Hands Bridge and back up to the overlook and the finish. Ultimately we finished 2nd and 3rd, not far behind Mark and his Mustang, with no spills or lost boots. Jenni and Stella earned the BC award. Bob delivered two more Starbucks drinks, which was WAY too much caffeine for me, but it was a welcomed treat after a long, wet day.