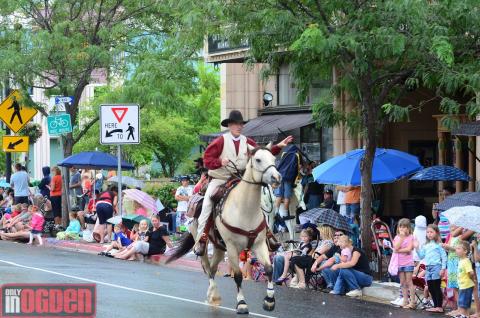 I have owned Sundance for 14 years and he is now 19. He had been mishandled when I purchased him in 1998 and I started his resistance-free training at that time. I used him as a police horse for the first few years but he wore shoes at that time and his hoof walls would crack and chip. His metal shoes didn’t give him good footing on the cement sidewalks and asphalt, and the concussion forces on his legs and shoulders were seven times greater than if he had not worn shoes.

I then removed his shoes for good after doing lots of research. His hooves did wear down quickly if I rode him too often on the sidewalk, though. I then heard about the new models of hoof boots that EasyCare was introducing and I liked the Glove when it came out but I had to wait until Easycare came out with the Glove Wide as Sundance’s front hooves would not fit the regular Gloves. I now have Glove Wides in several sizes for his front and rear hooves.

Sundance dances to music, plays soccer and performs at farmer’s markets, schools, parades, events for our troops and other special events. He is also a therapy horse and has gone every year to the Kid’s Rodeo for children with special needs and has gone to the Utah Schools for the Deaf and Blind. Sundance has even danced on stage with ballet dancers and is decorated with over 70 bicycle tail lights at the annual Christmas Parade and at Christmas Village in the park.

With all of the parades that Sundance performs in and that includes dancing during the entire parade route, I found that he was wearing his front hooves down too much on the asphalt. I started putting the Gloves on his front hooves this year and that solved the problem. Even the spins, side passing and other dancing moves during the parades has not effected the hoof boots. I even performed in a parade during a heavy rain storm and Sundance never slipped even once. The Gloves have held up extremely well and they do not twist at all on the front hooves during the parades. I just use them on the front hooves during parades which has solved the problem as it was the front hooves which were the hooves wearing down in the first place and the rear hooves are ok without the boots. I am very impressed with the look and performance of the Easyboot Gloves and I believe that I will have no problem with the Gloves on the rear hooves when I go on trail rides where no dancing is required.

Sundance has his own website with lots of pictures and a list of up coming events where he will be performing. He also has 24 different trading cards which are given out to every child he meets: http://sundanceogdensdancinghorse.blogspot.com.