My youngster, Sundance, has a habit of getting terribly excited at the start of endurance rides. His brain goes out the window, and his feet are totally unconnected to his body. Hence we often lose boots at the start of the ride due to his antics so I decided to glue them on for our latest ride: a 40K training ride on Friday, backed up with a 20K intro ride on Saturday, using the weekend as a no-pressure test and practice for when we start the longer distance rides later in the year. 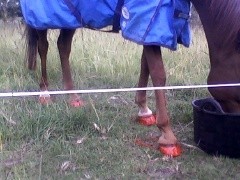 I used half-worn gloves with gaiters still attached so it was easy to pull them on and into position, and keep them in position while drying. I used Goober Glue on his sole and in the collateral grooves, and around the lower rim of the boot. Once settled in place, I then used superglue around the top edge, also to help keep the boot in place while the sikaflex went off. A couple of hours later I unscrewed the gaiters and spray-painted the boots bright orange.

I had every confidence in the boots, but none in my glueing technique, so I took every precaution possible! The spray paint stayed on for the whole weekend, along with the boots. He felt like he was moving on grass for the whole ride despite the very concussive and stoney surfaces and bitumen.

And he looked so flash in his coloured boots! Orange matches our training bib colour.When we start the big rides and I can wear my own bib again, I might paint them bright blue to match my riding colours.