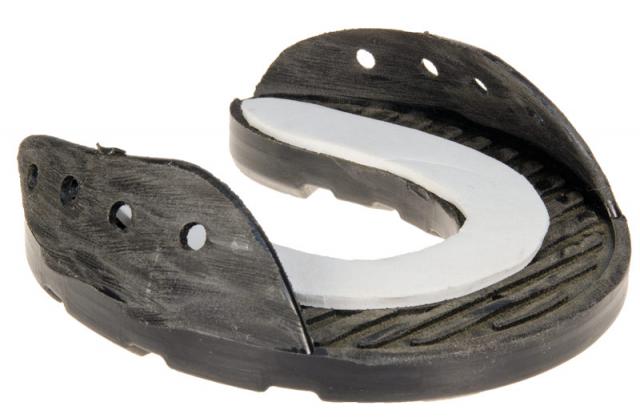 Let it be known: the EasyShoe Sport has proven itself. 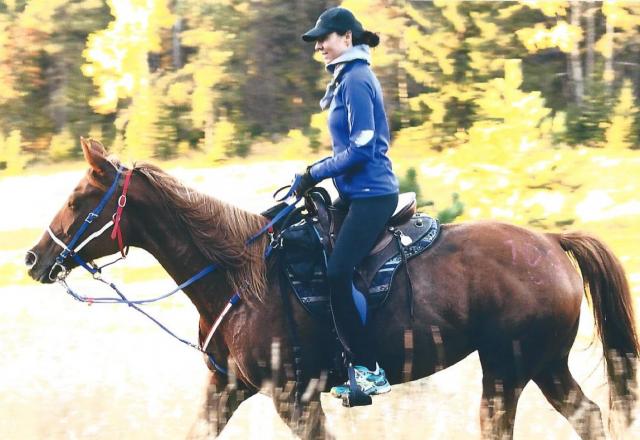 This shoe just protected Moxy’s feet through another 100 miles of tough mountain terrain. No, its is not the first product that I would have chosen for the job (endurance riding/racing,) but I just had to try it and it surprised the heck out of me.

I was a skeptic about the EasyShoes. In my mind they were a “crossover”: Chevy’s Equinox, Ford’s Edge, Volvo’s XC60. The EasyShoe was EasyCare’s answer to people on the edge of steel shoes and booting. But I was wrong. Yes, it may help people make the transition from steel to booted; sometimes people need their hands held even when the solution is obvious. But the EasyShoes can hold their own. As a skeptic, when the various models came out, I chose the most basic, the EasyShoe Sport. I figured if I really wanted frog and sole protection, I would go with my favorite product; the original Easyboot Glue-On. So if I was going to use a “Shoe,” it would be for the benefits of actually wearing something less. I slapped on the EasyShoe Sport in no time, it seemed way too easy.  First thoughts?  “No way. Nope. Not gonna work. Not enough to it. It’s gonna come off. And once riding in them, suddenly, after all these years in Gloves and Glue-Ons, I feel naked on the rocks. They can see my froggin’ sole!”

When it comes to riding equipment, I’m a minimalist. This is actually what attracted me to the EasyShoe Sport over the other models of EasyShoes: it’s the simplicity. They are extremely light, provide bare minimal protection (almost as minimal as a steel shoe would, but with the EasyShoes the heels can still expand and contract) and they are extremely easy and fast to apply. It’s funny, when I think about nailing a steel shoe to an animal’s feet, the corn-fed half of me says “Yeah it’s worked for thousands of years and literally helped shape the world we live in, obviously functional,” and the other half of me is giggling like “LOL that $#!t is Midlevel! Goodness it’s time to move on!”

Moxy is a very heavily-muscled mare, she is one of the most difficult creatures on earth to keep a boot on because that big, beautiful badonkadonk of hers can apply more force (or torque rather) on a boot than a tractor can we she drives up a hill. She wore the EasyShoe Sport for 100 miles of trail at the Mt Carmel XP, which is a rough, technical ride. The fact that they survived 100 miles of Carmel on Moxy gave me significant confidence in the product and I started using it more often. I have been very impressed. 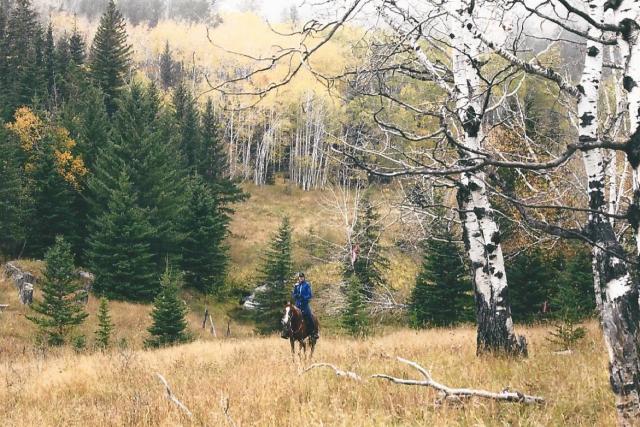 The Black Hills 100 mile ride was beautiful and extremely technical, to the point of being tedious and time consuming. Lots of rocks, tones of boggy creek crossings (literally there was a stretch where you crossed the same creek back and forth about 15 times, and you repeated that stretch of trail four times). I cantered wherever possible, which was not a lot, and that includes maybe four total miles of hard county road. Lots of rise and fall, and some super steep stretches, the perfect proving grounds for a new product. Moxy took 1st and Best Condition wearing the EasyShoe Sport. 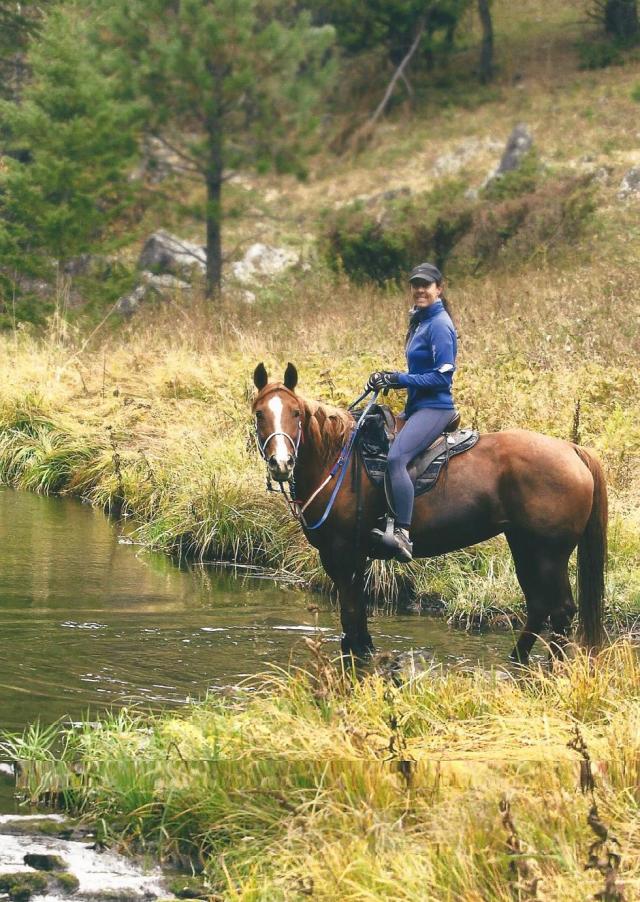 Thoughts: They are extremely easy to apply.  Half the work because you prep half the amount of hoof wall and you aren’t prepping the sole or frog, no Sikaflex under there. Just trim the hoof and prep the wings. They provide excellent grip in mud (or turf or snow,) better in those conditions (in my humble opinion) than the Glove or Glue-On or any other boot that covers/protects the entire sole/frog (given you haven’t added studs to those products). You give up protection, but gain grip. What a great option to have with Winter (mud and snow) coming.

Tip: after applying the EasyShoe, I recommend taking a blob of Adhere on the end of your finger (like you would put toothpaste on it) and smearing it on the very back heel of the shoe (on both sides) so it closes any possible gap between the horse’s heel and the end of the shoe. If the horse ever over reaches, that back hoof will start to try to make a flip-flop out of the shoe over time. This will prevent that back hoof from having a shelf to catch on. This will also reinforce the connection back there to prevent the shoe from starting to break away at the heel. That’s where it is most likely to start breaking away because the heel is expanding and contracting with every stride. As you know, that’s how we remove Glue-Ons, by breaking that seal and working our way around the hoof wall. 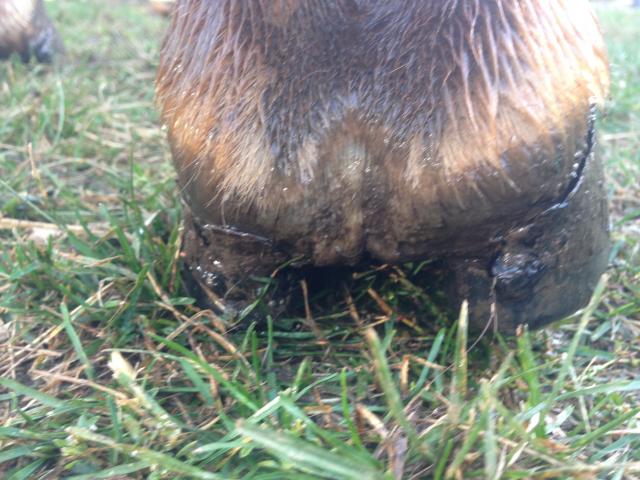 Tip #2: If your horse is a toe-tapper (some horses drag their toes, fronts  or backs, there are a lot of reasons this can happen and I’m not diagnosing those in this blog, just telling you how to avoid shoe-loss as a result of toe-tapping or toe-dragging,) put another blob of adhere on your finger and paint a thick layer over the seam between the hoof and the shoe where they meet at the breakover. Over 100 miles, a toe dragger could start to break that connection so that the shoe starts to catch (like if the sole of your shoe came off starting from the front but it was still connected at the back, every stride would make it worse once it starts catching.)  So again, painting some adhere over that connection will prevent the earth from having anything to catch on. I was out of latex gloves, so I literally just squirted a line of adhere directly over the seam and it worked perfect (ugly but functional) but it would be better smeared with a finger.

Here is another picture from the trail. Rocks, mud, you name it. 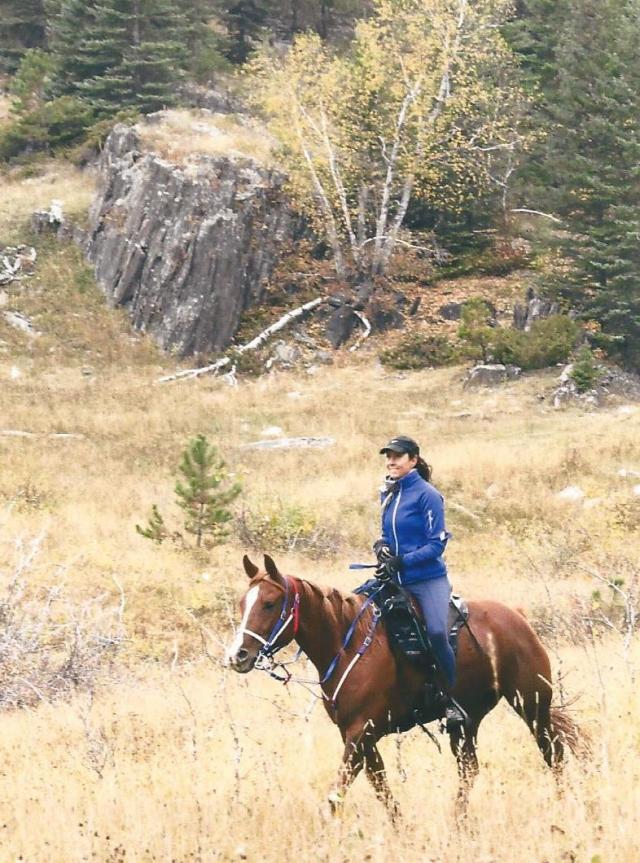 Give EasyShoes a try. I did, and I love them. I plan to use lots of them for all the winter training rides I have coming up.