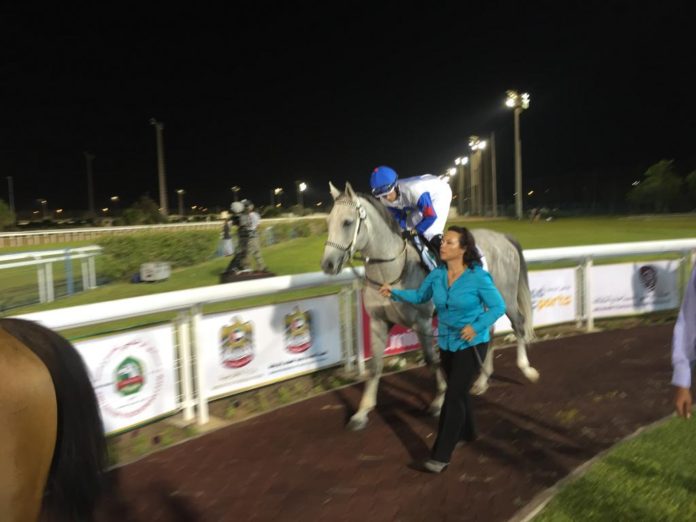 RB Rich didn't win the Sheikh Zayed Bin Sultan Al Nahyan Jewel Crown (the richest race in the history of Arabian racing), but a bigger battle was won at the Abu Dhabi Equestrian Club on November 8th, 2015.  Rich's invitation to race on the biggest stage in Arabian racing and the chance at the 1.2 million euro purse was the highlight of his young career and also a huge milestone for the EasyShoe Compete.

RB Rich raced the 2013, 2014 and 2015 seasons in a glue-on racing shoe that was once prohibited by our local track in Colorado.  It's not unusual for a young horse to use the same type of hoof protection each year but what is unusual is for a young horse to start his career in a flexible form of hoof protection.  RB Rich is the first horse that we are aware of to start his race career in the flexible glue-on EasyShoe Compete that not only conforms to track traction rules, but allows the hoof and internal structures of the hoof to develop and strengthen after application. Most young track horses are shod in a non flexible form of hoof protection early in life which in turn slows and hampers some of the critical development of the hoof. 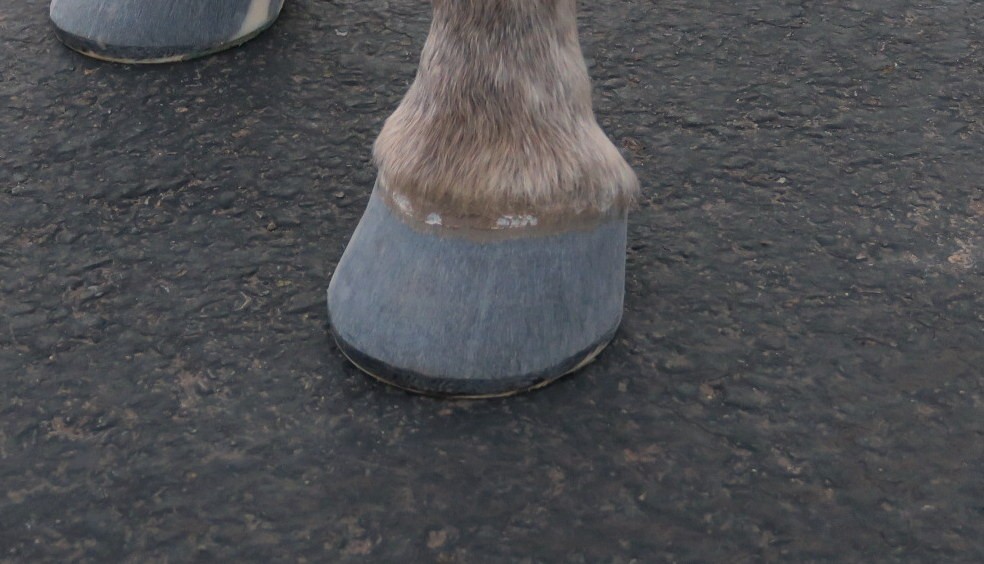 RB Rich's left fore after pulling his flexible shoes. Trimmed and ready to train barefoot over the winter months.  Not the hoof on most horses after a successful 2015 season.

Many readers are nodding their heads with agreement at this point while many others are calling me a tree hugger.  I ask all the non-believers to think about what the athletic fate of their young daughters and sons would be if their feet were cast to a rigid 2×4 board from ages four to eight.  The casted young foot was not allowed to flex when it hit the ground and the arch never developed, expansion was limited and the heel never developed to support the load of the body, feeling was lost and proprioception compromised.  We would never do it to our children but the majority of the equestrian industry does it to their most promising young prospects. Many equine industries rush to get steel and aluminum shoes on the two and three year old superstars so training can begin, races can be won and trophies can be collected.

In my opinion, the rush to fill the trophy case compromises the development of the equine hoof and as a result changes the lives of many horses.  As a result, many unsound three and four year olds head home because the horse is not winning and can't pay the bills.  The owners are frustrated and they wonder what to do next with the hopped up race bred horse.  The challenge is the horse now has the feet and internal structures of an 18-month old but the body and mind of four year-old. The engine and torque that the three and four year-old has developed is too advanced for the wimpy feet that were not allowed to develop with the other structures of the horse.  Yes, many horses race successfully with the current tools and protocol, but could their careers have been better and longer?

Can a flexible shoe really make a difference?  I believe it can.  I believe young horses can start their careers early, have hoof protection applied and still develop a strong hoof and strong internal hoof structures.

RB Rich is insignificant in the big world of horse racing, but he's a great example of how a horse can be managed with early trimming, conditioning barefoot and training/racing in a flexible form of hoof protection.  Rich has developed incredible feet, great digital cushion, and to date has been very sound.  He has all the ingredients to retire sound and start a second career.  He's a great example of what is possible. 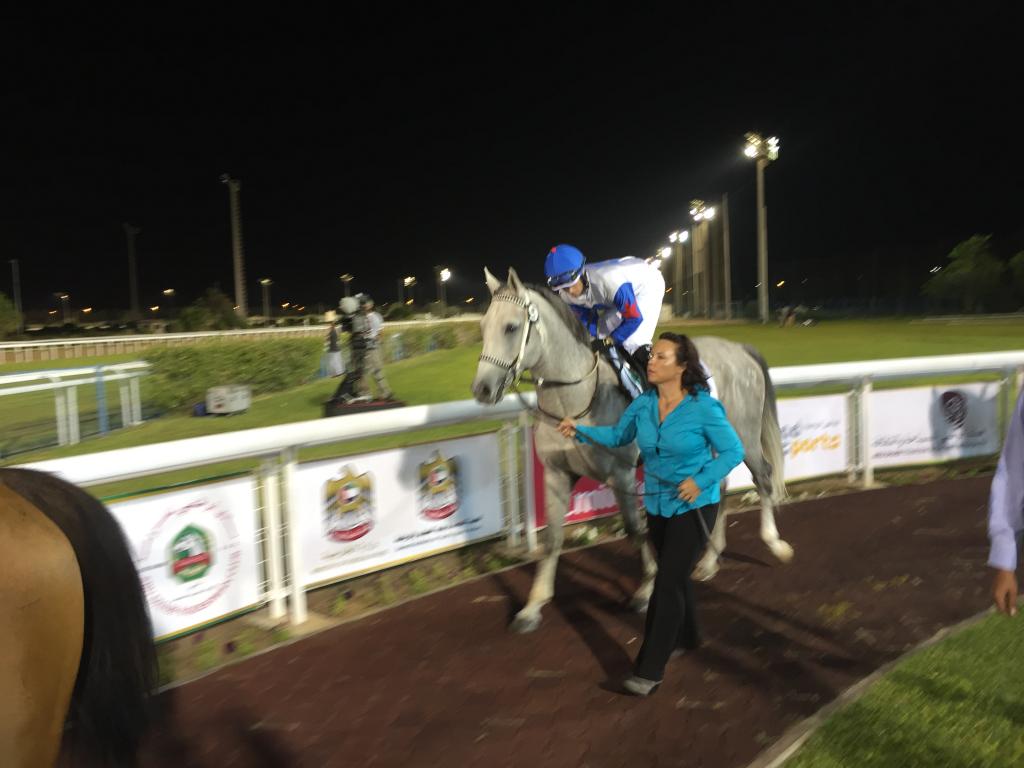 RB Rich before the Arabian Crown Jewel in Abu Dhabi: the richest race in the history of Arabian racing. 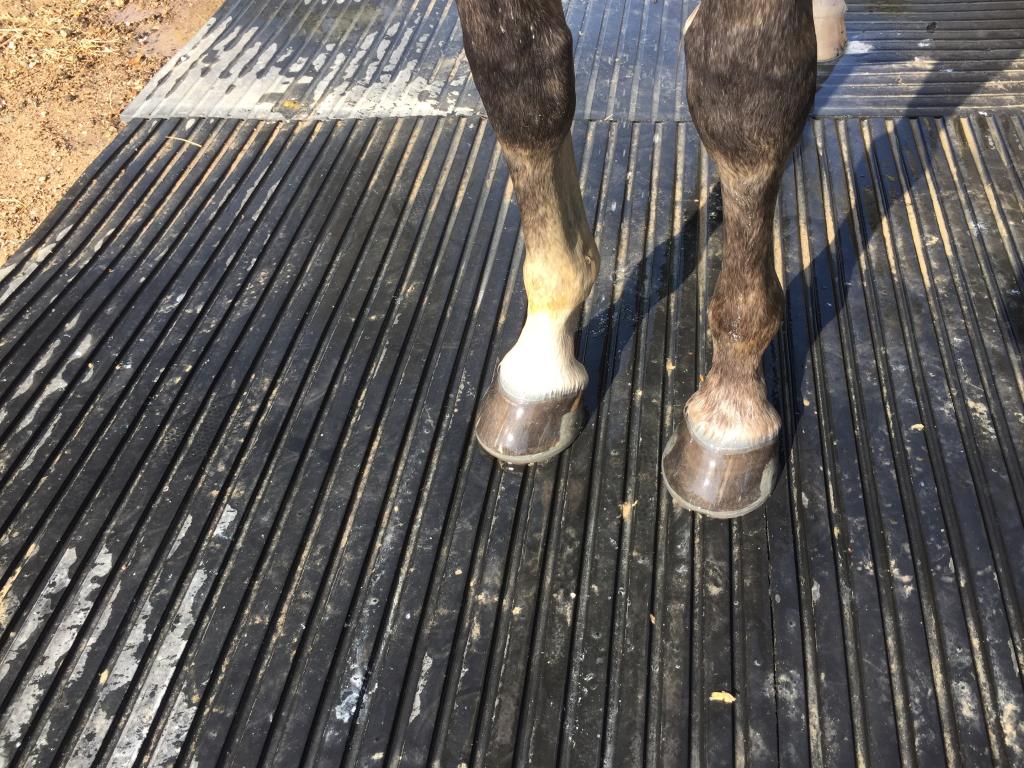 Rich's feet in Abu Dhabi.  Not the feet you see on most track horses.

I've personally seen the development of Rich's feet over the last four years, and I believe the following can improve a young horses feet and their long term soundness:

1.  Early balanced trimming.  Many people spend a great deal of time and money on breeding and then neglect hoof trimming the first 24 months.  Nurture the nature you have created. Give them the platform to perform.

2.  Do as much of the early training and conditioning as possible using a barefoot and booted practice.  Help the feet develop and build the internal structures of the hoof.

3.  When hoof protection is needed early use a flexible form.  It may be more expensive, but you just spent a fortune on breeding.  The majority of lameness is in the hoof or a result of poor feet.  Protect your investment.

4.  Pull hoof protection during rest periods or the off season.  Continue to develop the hoof mechanism.  For all of you that say you can't due to a sore horse, you didn't do #1, #2 and #3.

The EasyShoe Compete is not a first for flexible hoof protection.  And although the EasyShoe has made a small impact in the sport of Arabian flat track racing and some smaller splashes on the thoroughbred tracks, it's bigger brother has won some of the biggest races in the world.  The Polyflex shoe has won races like the 2013 Breeder's Cup Classic on Mucho Macho Man, had a successful career with the highest North American money earner in Curlin and has won stakes races on most of the tracks in the USA.  The Polyflex and the EasyShoe Compete are similar products, share the same patent and have both been highly influenced by farrier Curtis Burns.

The race in Abu Dhabi was the finish line for a product line that we have worked very hard on and believe in.  Rich has been a living research dummy that has come out the other side smelling like roses and has feet like iron.  It's not the road for everyone but it's a consideration for owners and breeders who want to develop the horse first and value second careers.  I'm personally excited to take Rich off the track and start a long and successful endurance career.

What are your thoughts?  Is this a bunch of hogwash or does shoeing a young horse in non flexible materials compromise hoof health, athletic longevity and successful second careers?