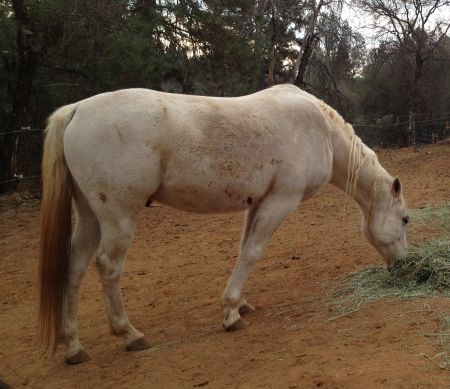 It’s always better to demonstrate to people how not to do things. I feel they learn so much more by observing others’ mistakes, than for everything to go perfectly smoothly and voila – a trimmed horse with perfect boot fit.

My friend arrived a day earlier than I expected (I’m still confused as to what year it is) and my schedule and her jet-lag meant that we only had one evening for me to demonstrate the fine art of putting boots on; deciding if the fit was correct; how to figure out if the fit wasn’t correct; and how to get the stupid boots off again if they were a tight fit (which is ideal… until you’re trying to take them off).

Unfortunately, looking at the available hooves for this demonstration, it became apparent that keeping on top my trimming schedule over the Holidays and subsequent sickies hadn’t been high on the agenda. All of the horses were long and all were in need of a trim. Hmm.

Being the easiest to trim (he doesn’t fidget much), and having not put boots on him for a while (he’s been growing out a rear foot abscess since October), Roo became our victim for the evening’s entertainment.

I cleaned out his foot and carefully showed my friend how long he was, how his heels weren’t supposed to look like that, how his toe needed to come back about half an inch, and how, yes, even thought he had a wonderful toe-callous, it wasn’t close to being in the location it was supposed to be. It definitely became an exercise in “do as I say, not as I’ve done”.

After trimming his first foot with a running commentary of what I was doing and why, I turned her loose with the rasp, the stand, and Roo’s long toe on the second foot. Once the squeaking had subsided, I was able to guide her through the technique of reducing toe from the top – long vertical strokes perpendicular to the ground designed to whack off overgrowth. 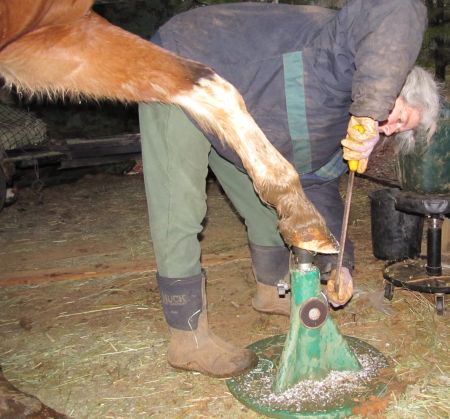 Here Uno is demonstrating long toes, while I demonstrate the removal of them. Notice how I’m keeping the rasp perpendicular to the toe and rasping straight down towards the ground.

Her initial reaction was to try and shape the toe, but I explained that all she needed to do at this point was get rid of all the extra. I explained – as my farrier had explained to me years ago – the rasp is a two-handed tool and that using long strokes would remove more hoof than small, prissy up-n-down zips: you’re not performing a manicure. 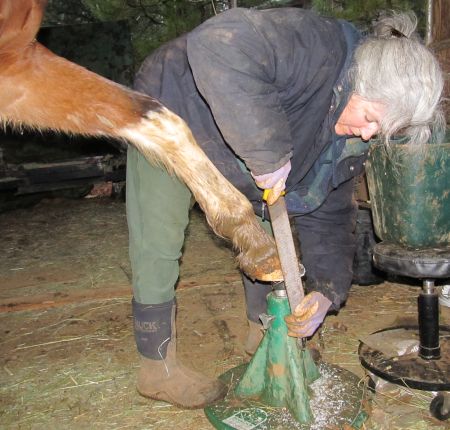 Working my way around the toe. The rasp is a two-handed tool. 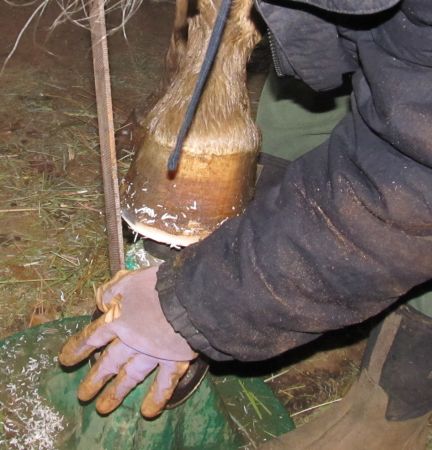 How did Uno’s toes get so long? He’s been off since Thanksgiving so his feet haven’t been getting the attention they need. Gloves prevent you rasping the skin off your knuckles when enthusiastically removing over-abundance of toe.

Once I was satisfied with the amount of toe she’d removed, I had her turn over his foot and work on it from the bottom.

There are few things more entertaining than watching a complete beginner trying to squeeze under a horse, with a foot between their knees, attempting to use an unaccustomed rasp in a competent manner. As anyone who’s ever struggled to trim their own horse knows, when you’re starting out you wonder how the heck anyone is capable of this. You can’t even figure out how to get into the ludicrous contorted poses necessary to get the job done. Your body doesn’t distort in that way, and the horse’s leg won’t bend in that manner either. Within about 30 seconds, your back is going into spasms and you lose all coordination and balance. And then you realise with dismay that you’ve only rasped one quarter of one foot.

This is all normal.

It takes a while for your body to learn hoof-trimming yoga (with such poses as “Horse Rips Foot Away” and “Can’t Quite Get at That Overhanging Frog Flap”) and learning to use the tools is a lot like learning to use chopsticks the first time – the food doesn’t go quite where you expect it to.

After a good amount of laughter (not shared by Roo, who by this time wanted his supper), I guided my friend through taking the heels back, removing scraggly bits (technical term), and how to roll the edge of the hoof.

Keeping the rasp at the correct angle seems to be one of the things that is hardest for the beginner to get right – manipulating an alien tool while concentrating on what you’re doing, how you’re doing it, and whether or not you or the horse are about to fall over is tricky.

But at the end, we had a rasped foot. It wasn’t perfect and there were a few things I went back and tidied up afterwards, but it was completely serviceable. 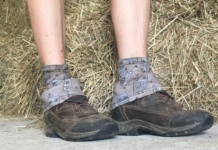