When I first started trimming I thought the goal was to have horses that could travel barefoot all day over rocks.  Since then I’ve realized that this is where ego comes in, and compassion goes out.

Another problem is that horse’s hooves are adaptable to their environment, however, this can get them into trouble if they don’t get enough daily movement and the environment they are in is not conducive to good feet.

Something that should be constantly considered about horses is that their feet grow at a rapid rate (roughly 1/16 inch every 4-5 days).  This isn’t just the walls. The sole, bars (which are just continuations of the wall), and frog try to keep up with the rate of the wall.  Just like human fingernails and toenails, hoof walls are only live tissue until they grow past the peripheral edge of the sole (the specialized equivalent of human skin) where they lose moisture and feeling.  Rock hard hooves aren’t necessarily a good sign.  A healthy sole is at least a half inch thick and relies on constant movement or simulated natural wear (proper trimming) to keep the wall and frog very close to the live sole plane.  A thick, healthy, live sole can be identified by it’s quality and appearance.  There will be concavity that measures at least a half inch deep from the peripheral edge of the sole at the quarters to the bottom of the collateral groves at the tip of a well defined frog.  The surface of the sole will be smooth like leather but not necessarily shiny like stone.  It will be void of lumps and bumps.  There may be a crackly texture directly under the coffin bone forward of the bars and surrounding the frog.  This is retained sole and can be between 1/8 – 1/4 inch thick.  This is a good thing that adds comfort when it’s managed properly.  It should feather out to nothing about half way from the bottom of the collateral grooves to the peripheral edge of the sole.  This should be a result of high mileage, proper trimming, or a combination of the two. 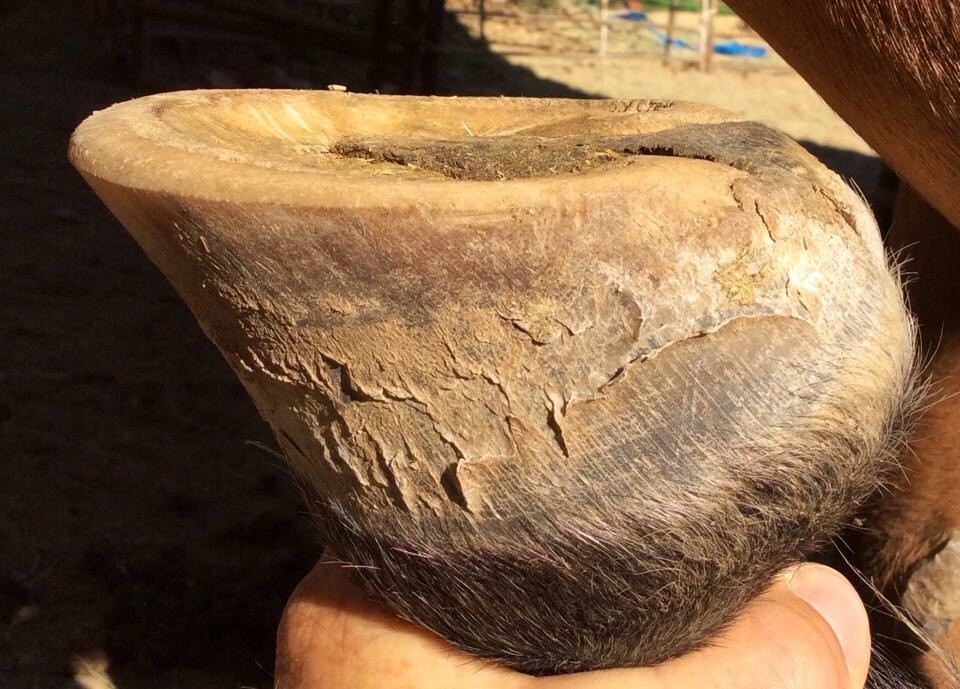 Because of the conical shape of the hoof capsule, when the walls are are allowed to grow past the peripheral edge of the sole for long periods of time, the sole tries to migrate with it.  The problem is that the sole has a border and the wall doesn’t.  This causes the sole to stretch and flatten under the horses weight.  This would draw more attention if the horse would just go lame every time this happened so we could all recognize a pattern and agree on the cause.  Horses have adapted to this problem over millions of years of evolution by accumulating, retaining, and producing an excess of the retained insensitive sole that I mentioned earlier.   In nature this would happen during the wet season when grass is abundant and the ground is softer.  It quickly gets worn away as it dries out and horses have to move more miles over more abrasive terrain in search of grass and water as it become more scarce.  This accumulation of retained sole keeps them sound enough to survive until it’s worn back down.  If over-growth persists and is not managed naturally through wear or mechanically through proper trimming then the retained sole gets thicker as the live sole gets thinner.  Eventually there will be nothing but thick retained sole that the horse becomes reliant upon for soundness.  At this point if an attempt is made to rectify the hooves, the retained sole can exfoliate all at once exposing the true, thin, live sole.  Exfoliation is a natural response to growth equilibrium of the hoof structures…out with the old, in with the new.  It’s just not meant to happen all at once after an extended period of overgrowth.

Miles of daily wear, frequent proper trimming, or a combination can develop any foot to its true potential.  I believe that the horse’s true potential hasn’t even been seen yet.  I do know that with the recent advancements in rubber boots and shoes the standard has been raised considerably.  Rubber hoof wear not only protects, but it helps build the horse (and saves the legs) and the highly regenerative structures of their hooves.

When people see photos of the feet that I’ve developed over years of simulated wear,  they often ask, “yeah, but is she sound all day on rocks?” My answer is, ” I ride in boots so they are improving with every step.”