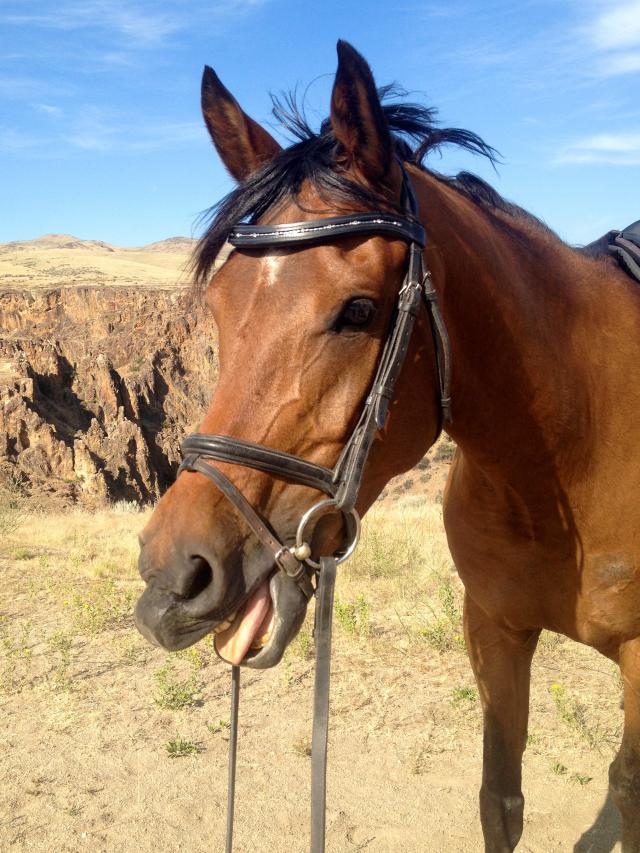 Last weekend at the 2013 AERC National Championships, I was lucky enough to be in the presence of several very knowledgeable, very talented hoof care practitioners. Between Christoph Schork, Rusty Toth and Susan Summers, I was in hoof care nirvana. Right there along with me was Topper, my seven year old Arabian gelding.

Topper has been barefoot his entire life. I got him as a gawky, gangly three year old, and chucked him out to barefoot horse heaven. Hundreds of acres of dry desert foothills. He spent his youth running up and down the hills, living in total bliss. Minus a stall, a blankie and a warm mash every night. Topper was never much for roughing it. I started lightly riding Top the end of his third year, trail riding at a walk a mile or two on gentle trails. His fourth year brought a little more riding, but nothing intense by any means. You see, when you’re 15.2 hand four years old on spindly, long legs, it’s all one can to do stay balanced. All of the riding that took place until Topper’s fifth year was barefoot on lovely sandy trails. I boasted about his strong feet and anticipated no issues in that department. Unfortunately, barefoot perfection did not bless us as we ramped up the miles. 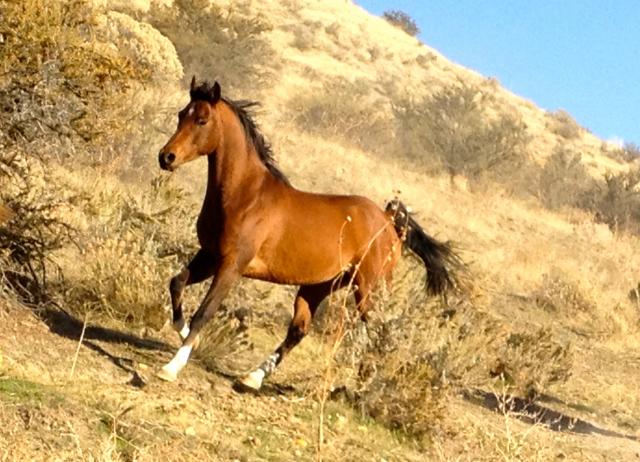 Running the hills as a 4 year old. The perfect environment to develop perfect feet. In a perfect world.

When Topper turned six, we started riding further, faster and frequently. I had him in Easyboot Gloves for all of his conditioning miles, which he seemed to come through with ease. However, the day after our longer, harder rides, I noticed Topper was tentative and footsore. I started putting Comfort Pads in his boots, which he definitely seemed to like, but did not help his day-after soreness. At this point we xrayed Topper’s front feet, and thankfully found no pathology other than thin soles. Unfortunately this proved to be difficult to remedy and caused more problems than expected. All summer we battled a sound-sore cycle that I thought he would get through with proper padding and riding. He did a few endurance rides with Easyboot Glue-Ons and Sikaflex packing. While he felt excellent during the actual ride, the bruising that showed up weeks later indicated his feet could not handle the extra pressure. 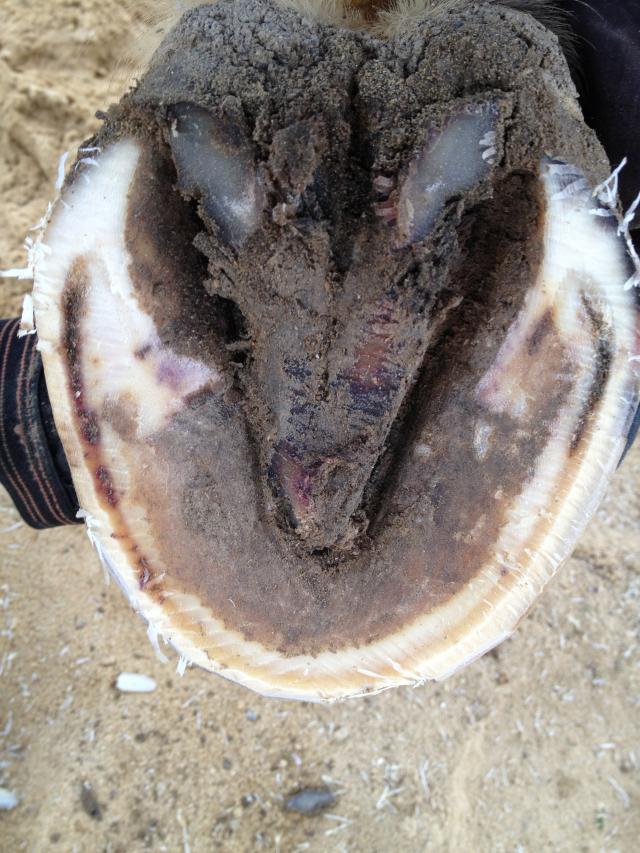 The end of the bruising growing all the way out. This shows even the soft padding of Sikaflex was too much for this horse. We spent the next several months working only in gorgeous sand arenas, which improved Topper’s feet and let him be comfortable and happy. 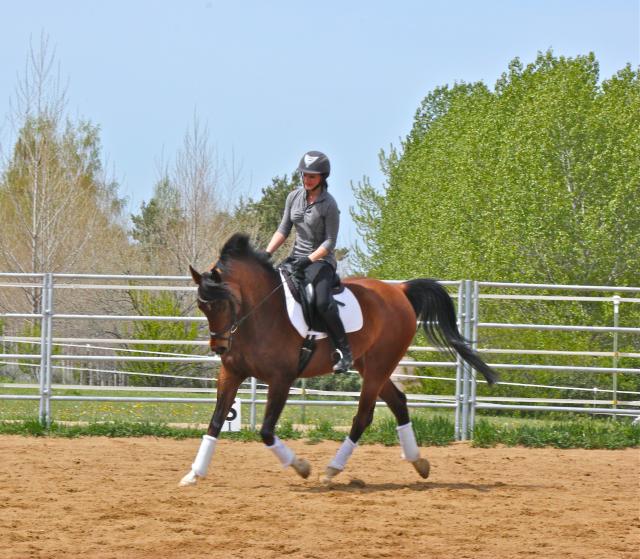 The Top spent the winter as a dressage horse, which was great fun while it was too cold to actually ride. Unfortunately as the weather warmed, I became bored and my hiatus with the endurance trail faded. Topper was brought home from the fancy dressage barn and placed on the back-burner. Apparently I can only focus on so many things at one time. Go figure. The move home didn’t do Topper any favors in the foot department. While he was nice and sound at the end of a trim cycle, I watched him short-stride over harder footing and downright limp over gravel after a trim. It was time for some serious protection. Enter, EasyShoe! 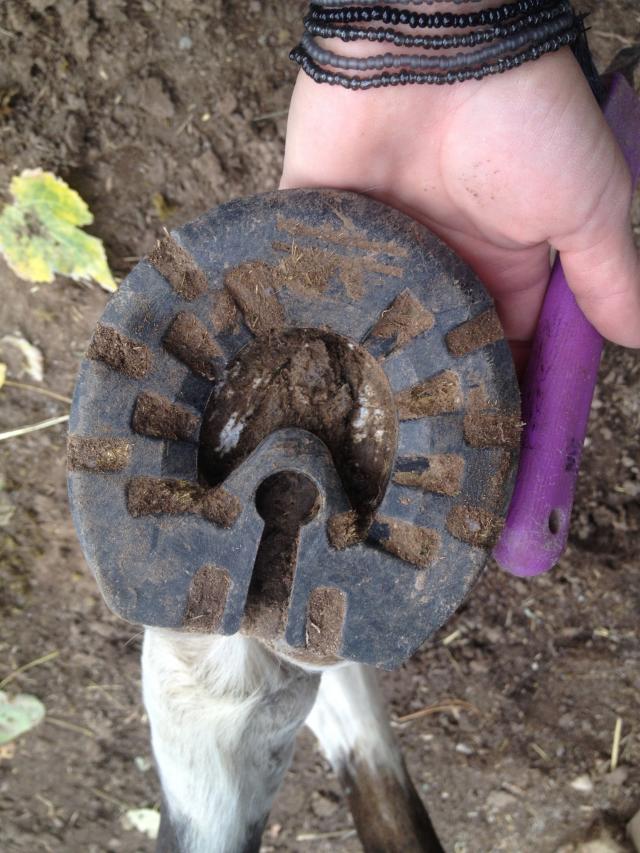 Innovative and progressive, Garrett Ford and team have been working hard on developing another option for those of us who want to utilize a longer-lasting form of hoof protection than the already stellar line-up of hoof boots. While the EasyShoe may not appeal to, or may downright offend, some folks, for others it will be exactly what was missing. On Saturday at the National Championships, in front of a curious group of observers, Topper stood perfectly still while Christoph Schork applied a set of EasyShoes to all four hooves. And he hasn’t stopped moving since.

For demonstrative purposes, Christoph used both glue and nails for Topper’s new trotters. His front feet were equipped with a final prototype of the EasyShoe, which Christoph applied with Vettec Adhere, and his hinds were outfitted with an older prototype shoe that he nailed on with four nails. My initial perception was that to glue the shoes on, preparation and application had to be perfect. Kind of like the prep for gluing on boots, but more like your life depended on not messing up. As with anything, practice makes perfect, but I could see where several different areas of prep and application could really screw up your results. Nailing the hinds on looked easy, if you weren’t afraid of accidentally piercing the coffin bone with a wayward nail, or nailing your thumb to the hoof. After the demonstration, Topper strutted off like he owned it. I didn’t tell him all he was there for was to look pretty. 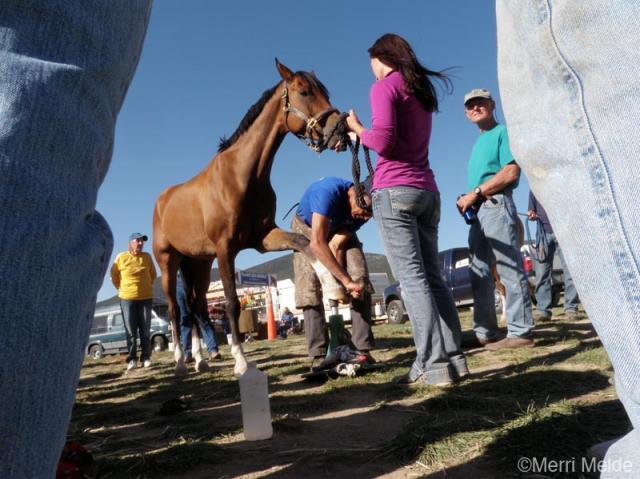 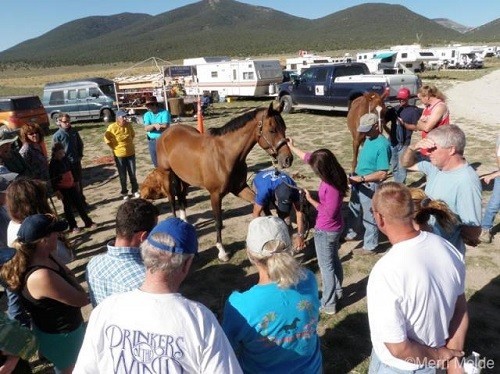 Photos above by Merri Melde.

Immediately after this, we went for a walk through camp over several rocky sections of road. Topper strode out, visibly lengthening his stride as the walk went on until I was barely able to keep up. He walked over rocks and gravel with no shortening or gimping. At one point he stepped on a rock and stopped, and half of his hoof/Easyshoe was up on the rock and the other half was touching the ground. Not only that, but you can visibly see the heel expand and contract as the horse loads and unloads his hoof. While the thought of peripheral loading makes some people want to gag, and the other thought of nails being driven into the hoof wall creates hate and discontent, all I can say is no one is forcing you to play. For those of us who have horses who have been raised and cared for in ideal environments, with ideal trims and ideal diets, yet still struggle with issues that may prevent using our horses to their full extent, or even keeping them happy and comfortable, the EasyShoe is another awesome tool in the box. 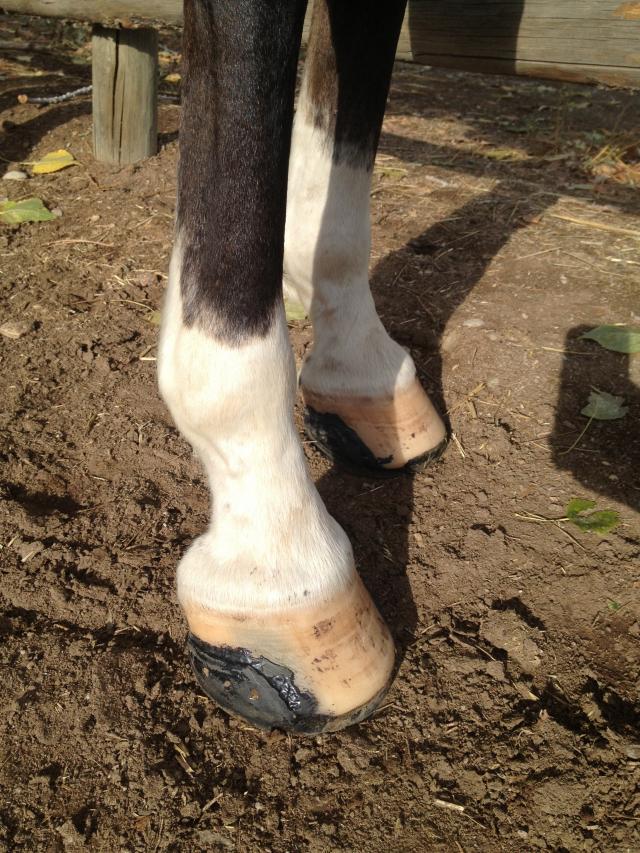 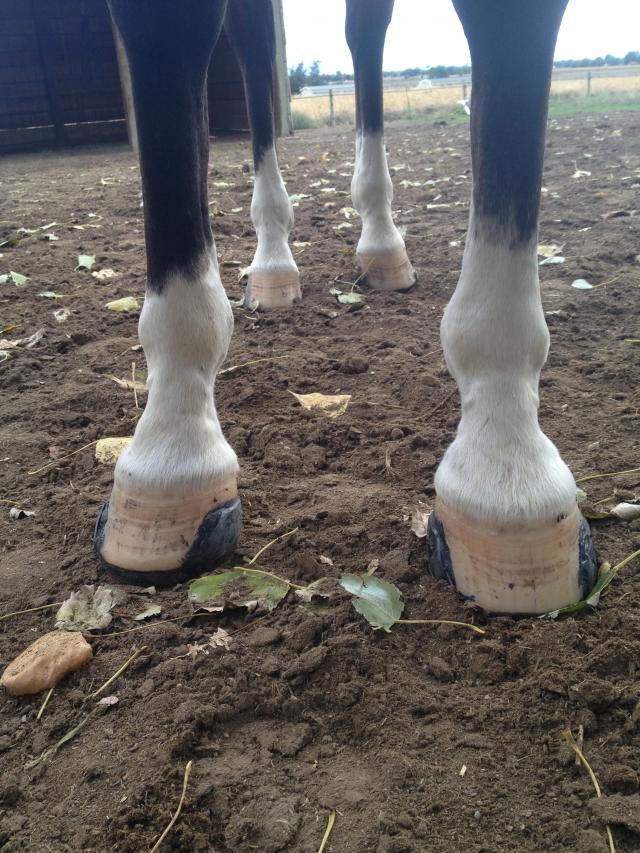 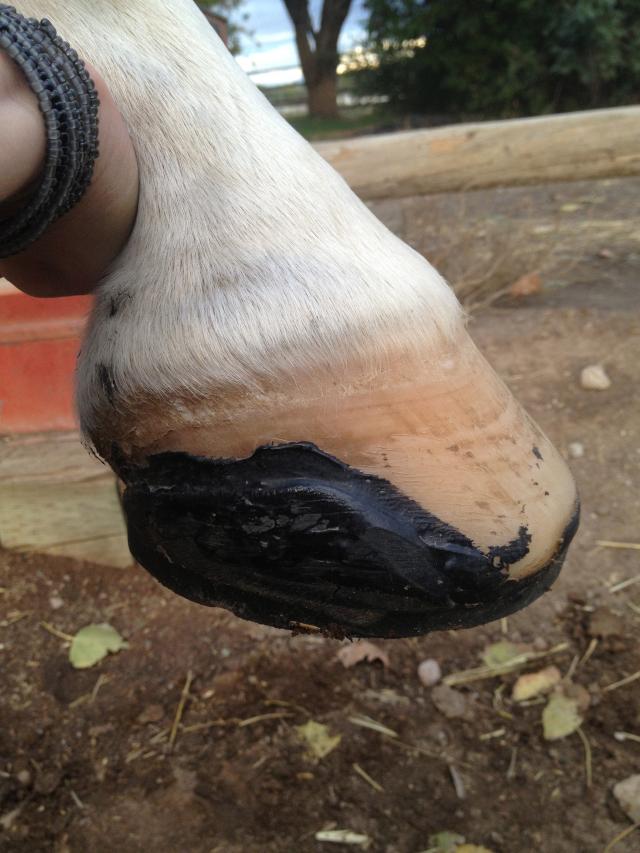 I love how Christoph set the shoe back to allow for a better breakover. 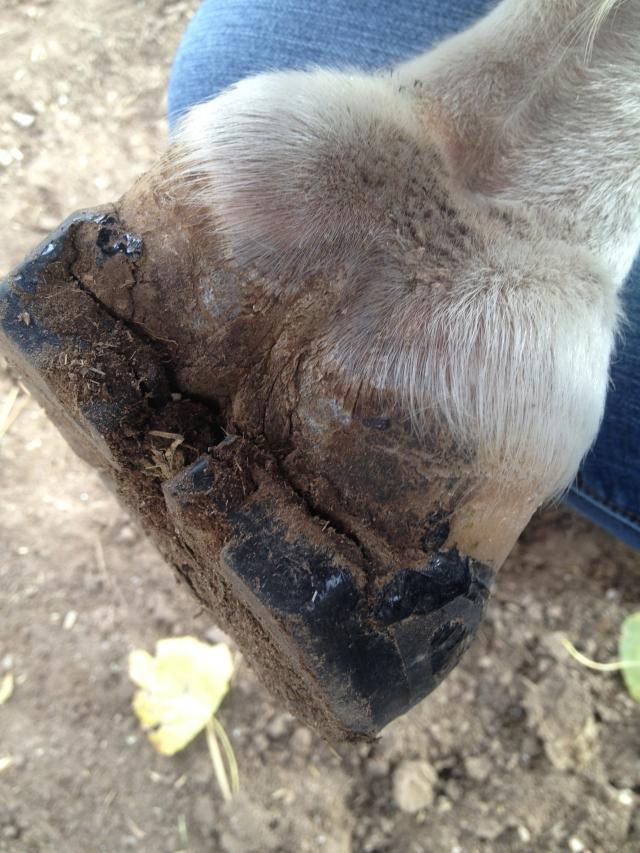 I am excited to see how the EasyShoes hold throughout the next couple weeks, and how much hoof growth we have. In an ideal world, we would use these temporarily, but if a horse requires more ’round the clock protection, I can’t think of anything cooler. For those that would rather drop dead than put a shoe on your horse, I hope you never end up with a Topper. But if you do, and he’s as cool as this horse, send him over. We’ll work with what we’ve got.