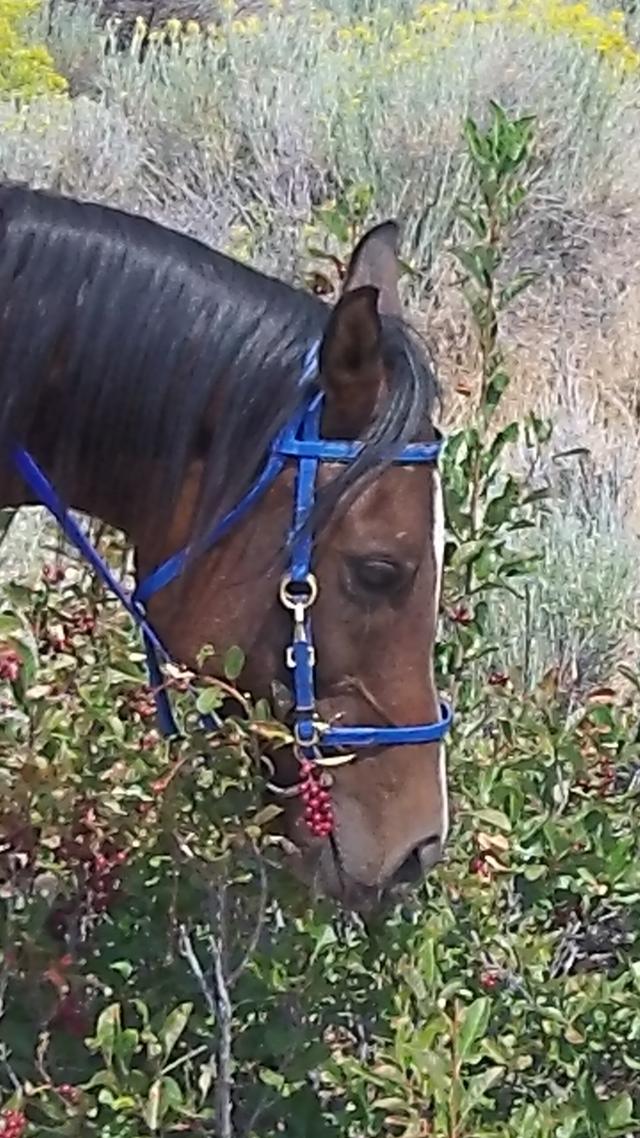 Raising Amazing Grace (aka May) has been a trial in patience, but it has all paid off. She recently finished her second 100 mile ride at the Virginia City 100 and at the same time completed the NASTR Triple Crown in sixth place. This series of rides is endurance at it finest and May really rose to the occasion.

I came upon May when I was searching for siblings to my other mare. May was a gangly, thin, 18-month old and certainly not what I was looking for. But the owner needed to move some horses and her doe-like eyes just grabbed at my heart. Oh well, what are you going to do but walk her the several blocks home? My neighbor took one look at her and very nicely said congratulations (her face said “what on earth are you going to do with that?”).  Recently she actually admitted that her first thought was just that and that I had lost my mind. 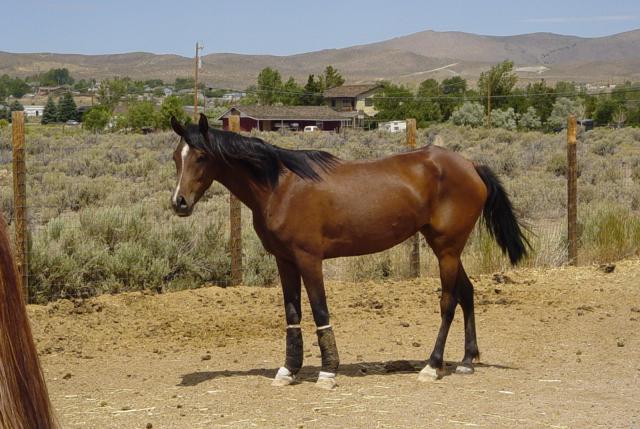 2004: still thin and being treated for Scratches again.

Not only was she underweight but she had photo sensitivity burns on every white mark, face and legs. It took nearly six months to get her legs completely healed. Her legs were left with scars and sensitivity that have been an ongoing challenge for us. She is prone to scratches and will break out with the least rub. For early Easyboot users this posed a huge problem.

Another issue for May is that her (otherwise awesome) feet are not the “perfect” Easyboot size and shape. The wideness of her feet means that she ends up in a bigger boot to accommodate the width making it too big for the length. This results in a loose heel and boots that do not stay on.

As sweet and loving as this little bay mare is, she can be nervous and flighty. When she is nervous she wants to move her feet. It probably bears mentioning that when she was young she was not very coordinated (hence the pun of her name, she was anything but graceful and it truly was amazing). Doing her feet was interesting at first. She would not stand on three legs. Lift a foot to work on it and down she went. We had never seen anything like it. We had to train her to stand on three legs by putting her against the fence. After about three weeks of this she got it, out of the blue she just started standing up. She was so proud of herself, you could see it in her face. In fact she was so proud of her new trick that she would continuously stand on just three legs. She still does it, especially if she is looking for attention or particularly happy about something. It is this sweetness that made the persistence worth every bit of the frustration. 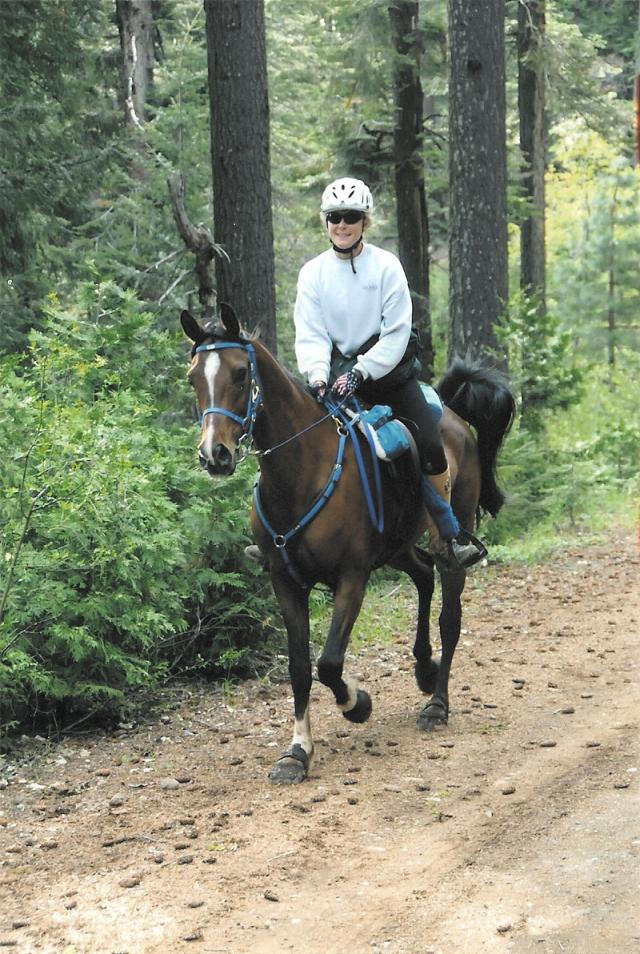 At the Wild West Ride trying the Easyboot Bares.

So back to the challenge of the boots. We started off in Original Easyboots. After several episodes of boot loss, it became evident that we needed something else. About this time, Easycare put out the Epic and the Bare, both with gaiters. Brilliant idea, unless you have a horse who is prone to scratches and can’t tolerate any rubbing. On top of that, we also still had the fit problem. Being a minimalist I really liked the concept of the Bare so that is what we started with. It was a nightmare and resulted in our pulling at the lunch stop at Wild West in 2007. The frustrating thing was that we would adapt our booting, carefully trim and things would work well for a ride or two then it would stop working and we would have to go back to the drawing board. Thankfully there were a lot of choices back then.

In an effort to deal with the rubs, we used many of the various methods including vet wrap, tube socks and nylons. The vet wrap and the tube socks helped somewhat with the fit as well as the rubs but then we would have issues when conditions were wet. Nylons worked well but did nothing to keep sand out and during warm weather they created more heat. We did finally get a solution in the form of neoprene cuffs that we made from a sweat belt and Velcro tabs. This has worked for us for the last couple of years.

Between the fit and the rubbing I was pretty much done with the whole barefoot thing so I took a break and shod her for a few months so that her Scratches could heal and we could do more training to try to get her to move more efficiently. I love having barefoot horses for many reasons, so this was a hard decision, but it was the right one for the time. Thankfully it only lasted a few months and I had a plan.

Our next try was in Epics and this worked much better as we could adjust them pretty tight after they were on. I still used the vet wrap and sometimes the tube socks. The Scratches were still a big issue and our ride schedule was definitely impacted but this also gave us time to work out our boot fitting issues as well as her emotional issues.  In 2009, May tore her check ligament and underwent stem cell therapy. It worked great, we also took our time doing rehab and brought her back pretty slow. She ended up with that entire season off from competition.

When she finally came back in 2010 Easycare had come out with the Glove and Glue Ons.  That year we worked with Dave Rabe and were able to get a fairly decent fit with the Gloves.  That same year, my friends Lucy Trumbull and Leslie Spitzer introduced me to the neoprene cuffs which have been part of the final answer to our rubs. The solution for our Scratches came in the form of white vinegar. We wash her legs after ever ride and then spray her legs with the vinegar. I still have to check her legs daily for any nicks or abrasions as these will also lead to scratches. Between these two things we have been free of scratches for over a year.

So we started off the 2010 season with a new plan to use Gloves, along with the recommended athletic tape and the neoprene gloves. It worked like a charm and we had our best year yet. It may have only been 300 miles and five rides, but one of them was the Sunriver 100. We did all of these miles in Gloves and had no issues at all. 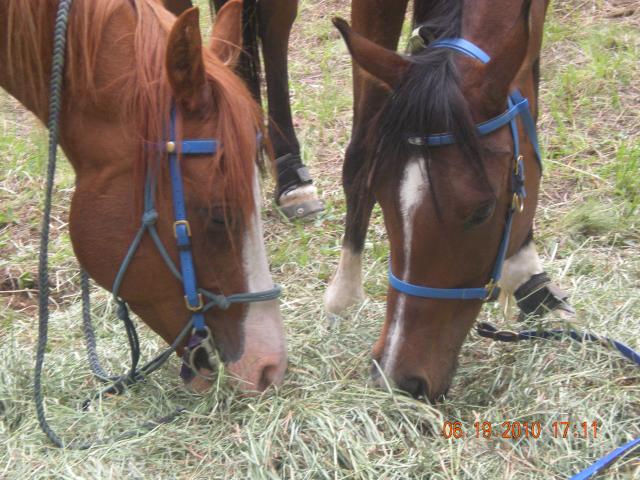 Sun River 100: May’s first 100. She wore Easyboot Gloves and neoprene cuffs, which can be seen on her left front and right rear. She is sharing her snack with Thunder, who also wore Gloves.

This year I had included the NASTR Triple Crown on my list of goals for May. Knowing that the 75 and the 100 are really rocky I wanted to increase the amount of protection. For the 75 I just put a bit of Goober Glue in the bottom of the Gloves to add a bit of cushion and to help keep the boot on correctly through the treacherous rocks. It worked fantastically and we had no issues at all (unless you count the torrential down pour we rode in).

Headed out on our last loop in the rain, slick and muddy. Okay has Glue-Ons and May has Gloves. Even with all the wet mud, neither horse slipped or lost a boot.

May’s feet still don’t measure up correctly for the boots but this summer EasyCare came out with the Glove and Glue-On Wide sizes. Finally a sizing chart that was written for May’s feet, or so I thought. In preparation for the Virginia City 100 I got her all trimmed nicely, waited a week and put on the boots. They fit like a dream and I thought that I finally had the text book fit that I had been looking for all these years. Upon arrival at ridecamp I set to putting on the Glue-Ons. What was a great fit three days earlier was not so good today on the front. The backs worked great. Thankfully, Dave Rabe was there and we went through our bags of tricks and finally got a size larger regular boot to fit OK on the front. It was no worse than I had been using successfully for the previous year but now she is in a full size bigger boot. 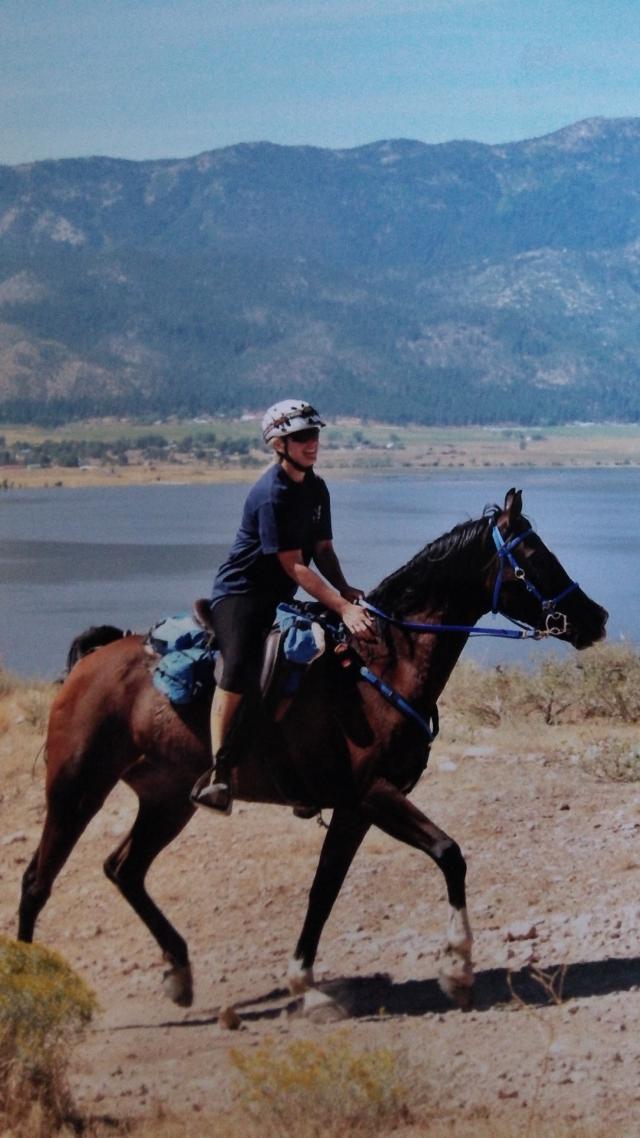 Virginia City 100, photo by Baylor/Gore. Wearing Glue-Ons and having a great day.

So maybe our problems are not solved perfectly, but we do have a system that is working really well for us. I do not believe that one should trim the foot to fit the boot but I do strongly believe that you have to have a correct trim. We use the Gloves most of the time and glue ons only for rocky 100s. Part of the secret to the Glue-Ons is having a good gluing protocol that works for you. The Adhere product is great as it sets up quickly. I don’t use much, mostly just around the top of the boots. The Goober glue is nice and soft and provides a good cushion but it takes 24 hours to set up. I use liberal amounts of goober glue on the sole and bottom edge of the boot. We no longer have issues with scratches and our boots fit just fine. We might never get that textbook fit, but persevering and working through all of the issues was well worth it all.

So if you are having issues, talk to others and take all suggestions. Be patient and persevere. You never know what will work for you.