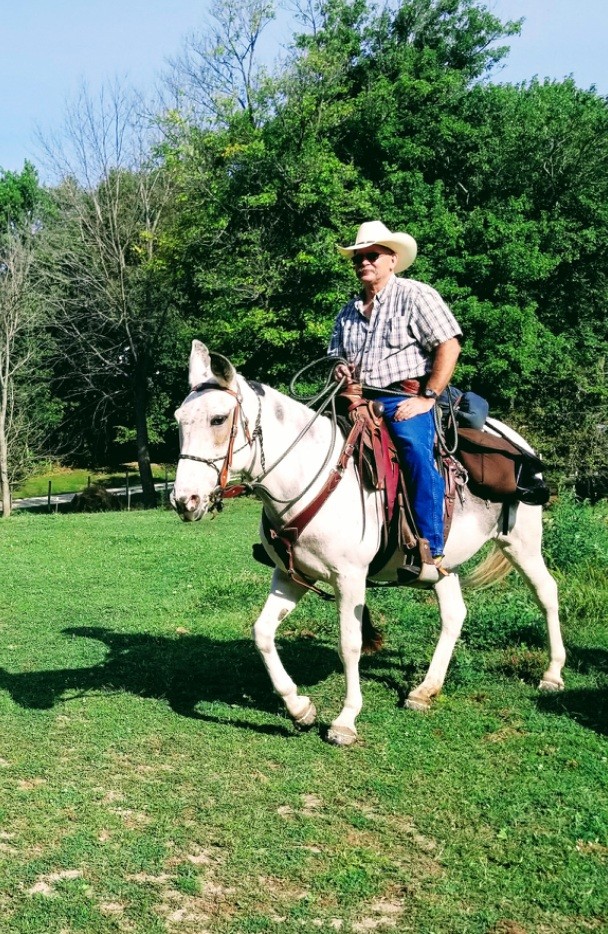 A journey of 130 miles starts with the first step and a good pair of hoof boots. Each year I take a horseback journey, with a group of friends, from Central Illinois to a rodeo in Fort Madison, Iowa. The trek usually takes us about five and a half days to complete and includes crossing the Mississippi river. Needless to say, whatever animal I’m riding, takes a whole lot of steps from start to finish. For the past two years I’ve taken my wife’s mule, Sister. Yes, that’s the name she came with. You know what they say, “bad luck to change the name.”

I know that mules have gotten a bad wrap over the years about not being able to keep their boots on. I’ve never had any problems with mine staying put. In fact, this year I put her EasyCare Glue-On boots on a week before we left and they stayed on for about six weeks. You know what they say about cobbler’s kids not having shoes to wear? Well farrier’s horses are the last to be trimmed. I don’t typically leave them on that long, but I just didn’t have the time to remove them. When I did take them off, they were still on good and tight.

Being a mule and having a mule hoof, doesn’t mean that they can’t wear boots. Nor does it mean that those boots can’t be glued on and stay put. I really think the magic lies in the prep work. Whether you’re painting a car or painting glue on a mule’s foot, it all starts with the prep work. I believe in prep work so much so that I don’t use (or let my clients use) fly spray for 24 hours before I glue on a boot. The oils from that spray will run down onto the hoof and it won’t allow for a proper seal. I also need to have a clean, dry hoof. If an animal has been standing in mud and slop, that glue will not stick. But with a dry, clean, properly trimmed hoof even a mule can walk over 100 miles in an Easyboot Glue-On.

I rough up the hoof with my rasp and put a little Sikaflex in the bottom for a bit of cushion. I also run a line of Vettec glue around the outer edge for a good tight seal. I wouldn’t take that Iowa ride if I didn’t have a boot on my animal. The blacktop road is just too slick with a traditional metal shoe. Throw in some rainy days and it’s a recipe for disaster. The boots also keep road debris out of Sister’s feet. You would be amazed at what people will throw in a ditch and you don’t want to walk over that barefoot, no matter how hard the sole. Before you say it, I can hear what you’re thinking. “Well, sure. You only traveled on a flat road. You didn’t have any rugged terrain.” Got you covered.

We have also taken Sister to Shawnee National Park for several week long riding vacations. If you’ve never been to Shawnee, it’s one of the most scenic rides in the world. Sister has been there in both hot, humid summer weather and in brisk fall weather. Her boots do fine either way. She’s worn both the EasyCare Glove boots and the EasyCare Glue-On boots there. She’s also gone barefoot. She has good, strong feet and she does just fine on the rocks. Shawnee has very rugged, steep, rocky terrain. We were also there after several days of rain so it had some incredibly boggy areas. I was a little nervous about going through some of the bogs because I was afraid the animals could pull a muscle. But, in some spots, there was just no other way around. We had to go through and the boots did just fine. We took a couple of seven hour rides and several shorter ones while we were in Shawnee and we left with those glue on boots still in place. On one particular day, we were temporarily misplaced. Otherwise known as lost. We ended up walking in some non-horse areas that were nothing but large rocks and boulders. Through all of those twists and turns, she did just fine. Like I said, I don’t think Sister being a mule makes a difference with boots. The difference comes in the proper trim, fit, and prep work. If you don’t have that, don’t use boots because you aren’t giving them a fair shake. You’re just setting them up to fail.

But it’s not all about the boot. Sister walked a lot of miles through Shawnee and many other state parks barefoot. We have a paddock paradise at home and she does a lot of walking on small rocks, lime, and dirt. In addition to providing better digestion of her food, I think this really helps to toughen up her feet and get her physically conditioned. With proper nutrition, environment and trimming, I think nearly any horse can go barefoot. However not all horse hooves will have the same toughness and durability as a good ol’ mule hoof. So, I wouldn’t recommend going to Shawnee or anywhere else without carrying some “just in case” boots. I never leave home without a back-up pair of boots. I have a bag that ties on to my saddle that I use to store them in. EasyCare also has the Hoof Boot Stowaway that works well for carrying boots. You just never know what’s going to happen on a trail and you need to be responsible for your animal. Whether on the road or on a trail, Sister has walked all over Illinois and Iowa. She’s done it barefoot, in EasyCare Gloves and with EasyCare Glue-On boots. She’s never given us a misstep and I would love to ride that mule in her boots from Texas to Canada. For some reason, my wife doesn’t want to do that. I can’t imagine why. But if that day ever comes, I have no doubt that the mule and the boots will do just fine not matter what the terrain.