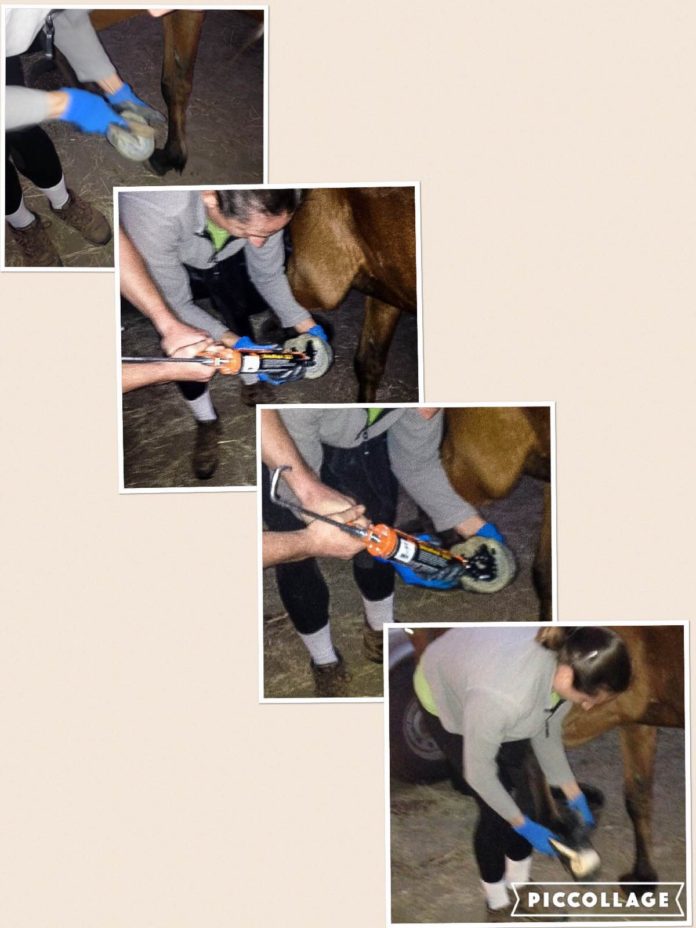 When something is working for me, I tend to want to stick with it. For most of last year’s ride season, Gloves with power straps got my mare, Brooke, through many a mile with no problems. This year, I decided it was time to play with some new skills in order to have more “tools in the toolbox,” so to speak. I have wanted to try the “sik method” of gluing for awhile, and our first ride of the season seemed like a good time to experiment. Leatherwood is a challenging mountain ride that would adequately test the boots, but with decent footing and all vet checks looping back into camp in case of any boot losses.

My plan was to use a set of boots that were worn but still had plenty of tread, the kind I would normally relegate to conditioning rides while using newer boots for races. Unfortunately, my procrastinating nature got the best of me, and as ride day approached, it became clear that my new Gloves would not be ready in time. Time for plan B!

With a tube of Sikaflex still begging to be used, I decided to try out another method I’d seen in a video with Kevin Myers a few years ago. By applying the Sikaflex to the sole of the hoof, I’d get some extra concussion absorption and sticking power to keep the boot in place. Additionally, I could leave the gaiters on so that the boots could be used again without having to detach and then re-attach the gaiters. 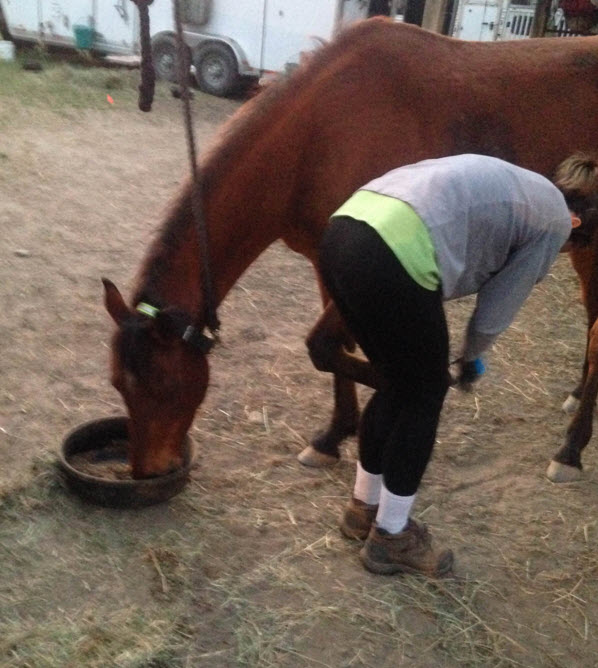 Brooke happily munching away while I use her as a guinea pig.
I cleaned each hoof thoroughly with a wire brush, then applied the Sikaflex directly to the sole where there was concavity. Next, I smoothed the glue with a popsicle stick so that there wasn’t a lot of excess to squish out the back of the boot. Then I applied the boot as I normally would, tapping it in place with my rubber mallet and fastening the gaiter. The video had the top of the hoof wrapped with athletic tape, but my boots had Power Straps, so I skipped the tape. That’s it! I left Brooke on her overhead tie at the trailer, peeking at the boots before bed to make sure nothing had twisted, and allowed the Sikaflex to set up overnight. 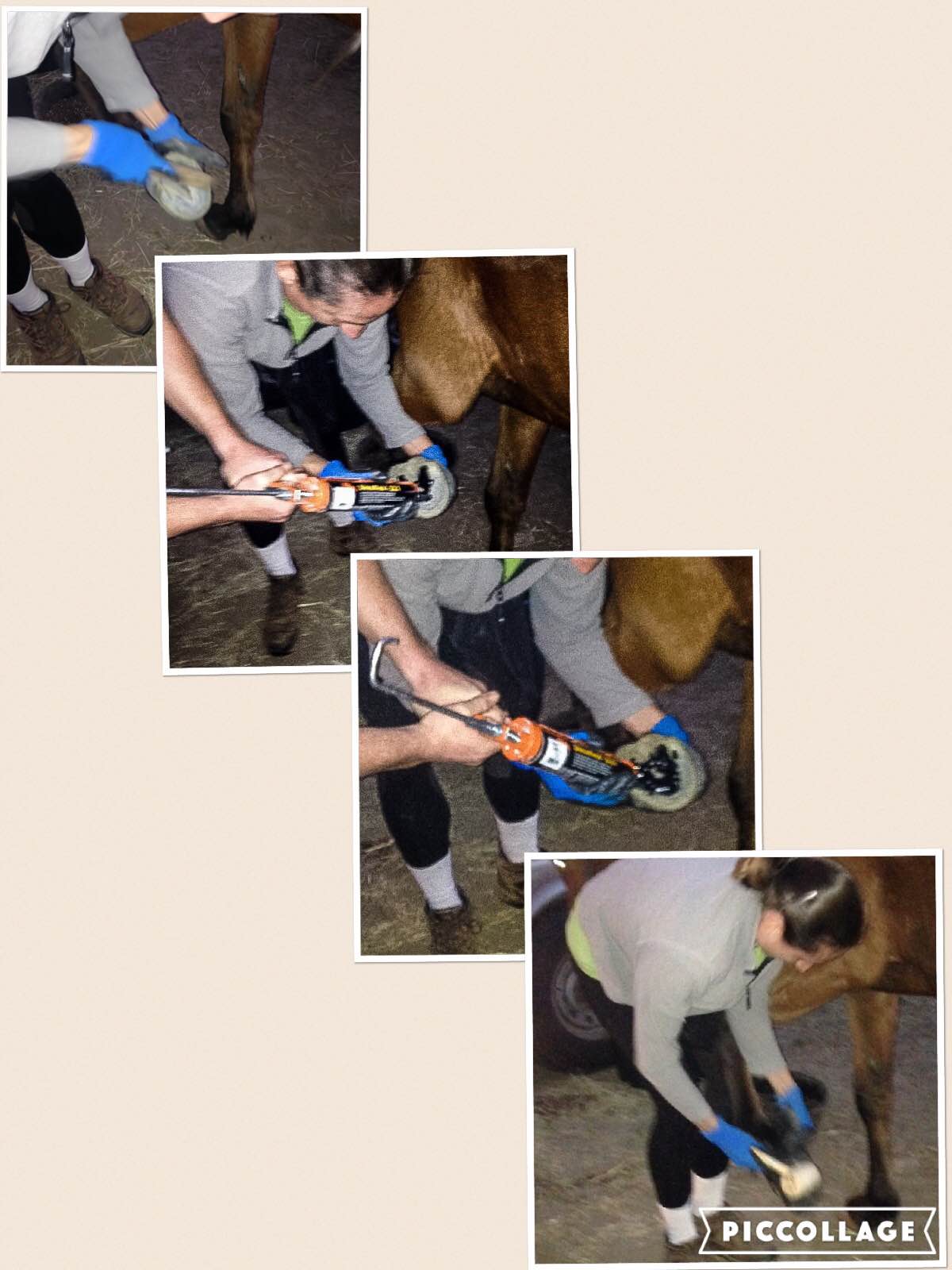 The boots performed beautifully, going up and down 50 tough miles of mountains and through mud and water crossings the next day. Brooke’s vet scores were all A’s, and she looked great at the finish.
I learned a couple of important lessons when it came time to remove the boots. After some prying and maybe a few bad words, I discovered that the boots come off much more easily without the Power straps attached. I also found that I probably overdid the glue in a couple of the boots. However, it was fairly easy to remove leftover glue from the inside of the boots, leaving them ready for the next ride. 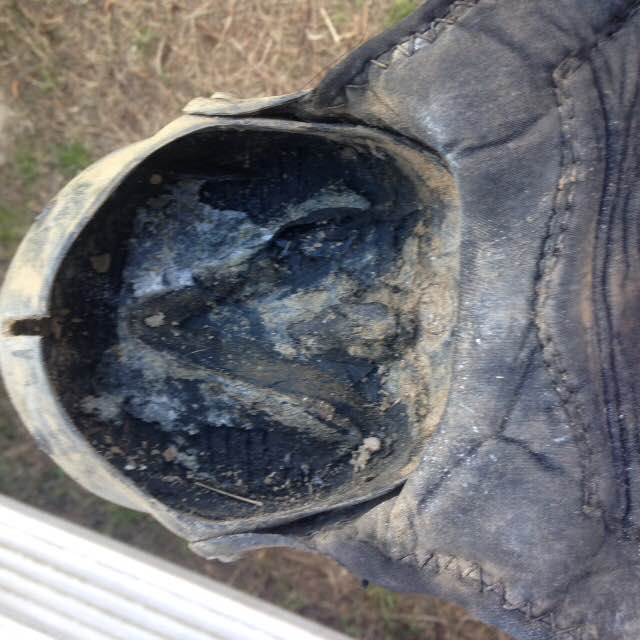 One boot after removal with some glue still attached.
I would definitely consider using this method in the future, especially on muddier boot-sucking rides or rides with a lot of hard footing where some extra concussion absorption is helpful. It’s great to have so many different ways to use my Gloves!