Here at EasyCare, we have some top notch individuals working along side us as dealers. The following article was written by Jason McClure out of Hutchinson, Kansas. For eight years, Jason shod horses for just about every discipline imaginable. These days however, Jason focuses primarily on barefoot trimming and this EasyCare dealer couldn’t be happier with his career decision. Jason’s passion for the barefoot horse is contagious. He admits he has received quite a bit of razzing over this change in direction but Jason is not to be swayed. Jason says he has been amazed at what he has been able to accomplish without shoes and how now he is able to help horses like the one in this article and so many others like never before.

In November 2009, I gave a presentation for the Purina Equine Health Awareness Clinic. After my presentation, I was approached by a lady named Dianne who informed me that she had a horse with asymmetry issues. I was very excited to work on her horse because I had just returned from a trip to California where I had been working with my business partner, Steve Karshner. While I was there, the main focus was rehabilitating horses suffering from the effects of asymmetry.

I learned a lot of new information and was positive I could help her horse. She commented that they had diagnosed him with navicular and had been working with her veterinarian and farrier for years with no significant success. Dianne was ready to give up on this horse until she heard me talk about asymmetry at the clinic. I really liked Dianne from the start; she sincerely cares about her horses, and she was eager to do whatever was prescribed to reverse this unusual and misunderstood condition.

All hoof care professionals know we can’t fix every lameness issue on our own; it has to be a team effort among the horse owner, trimmer and veterinarian. When I saw Chex for the first time it was without a doubt the worst asymmetry case I had ever seen. He walked out of the barn head-bobbing lame, his left front foot was almost straight up and down and the right front foot was horribly underslung.

Chex’s shoulders were extremely uneven, and his left knee was an inch and a half higher than his right knee. Imagine having one leg longer than the other; you would most likely have pain all the way up through your neck and every muscle and joint in your body would hurt.

It’s extremely important for the horse’s body to be aligned. We have to get the horse’s body adjusted first before its feet start to come into balance. You must level and balance the knees, and the shoulders, so the horse is baring weight evenly on both front feet. They have to move correctly with a heel first landing in order to build heel on its low leg, as well as to keep the high heel down and de-contracting. Dianne mentioned that she rode with one stirrup longer than the other. This is typical of the condition.

Chex’s frame was uneven; his shoulders were out of alignment and over-muscled on one side. As a result, the saddle would never fit him properly. His former farrier had shod him in a 2 degree wedge shoe with a pad on the right front and a keg shoe on the left. 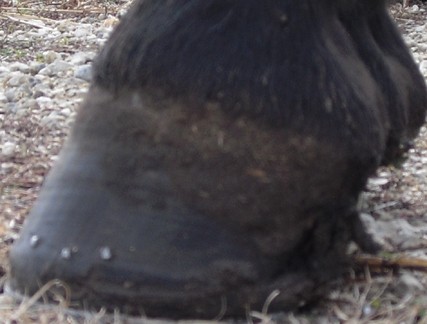 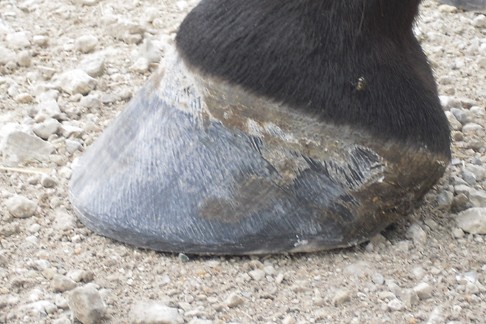 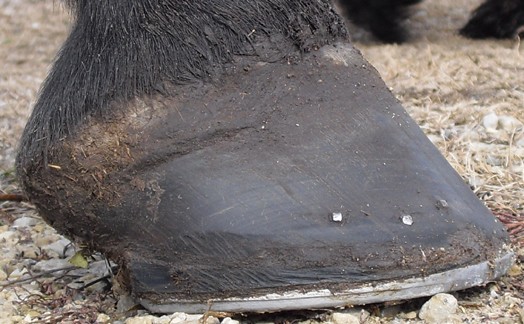 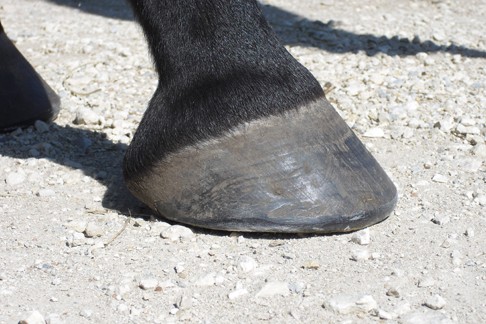 His instincts were correct as he was trying to level the knees. But in order to bring this horse into balance you must build heel on the low underslung foot, and that can never be done with a shoe, believe me I tried for years.

I launched Chex’s rehab by pulling off all the shoes and doing my trim. Because I planned on putting Chex straight into a pair of Easyboot RXs, I was able to be aggressive on the first trim and bring his knees nearly level. Next, I fitted Chex in a pair of RXs with dome pads, and when Dianne lead him away from me he took two head-bobbing steps then trotted off like nothing had ever been wrong.

It’s important to get a horse movi

ng properly with little or no pain in order for feet to restructure themselves, and I don’t believe I could make those kind of changes without using the boots as part of the therapy. We made big gains on that first trim, so I set Dianne up on a four week schedule and we stuck to it. I showed Dianne how to stretch him and explained to her how to exercise him daily in the round pen. Dianne was faithful with her responsibilities, and we had her riding Chex in four weeks. She called me about six months into the rehab and told me that Chex was presenting lameness again. At that point, I knew we were on the right track. I know that sounds funny, but I explained to her that when a horse or even a person is lame for a long period of time the muscles must acclimate to moving correctly again. 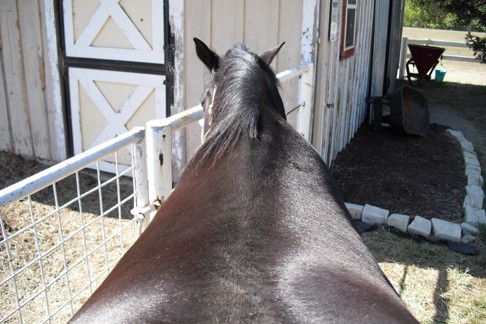 At this point we had all the pain out of his feet and he was moving the way he should. However his shoulder muscles were sore and not accustomed to a full range of motion. I told her to keep stretching his legs and shoulders before she rode him. Also, Dianne was to keep him trotting in straight lines to re-muscle his shoulders evenly. She stayed faithful to the rehab and did everything I advised her to do. It’s been ten months and Chex is doing great. In September, Dianne entered Chex in a western pleasure class for the first time in years. They won third place and he showed no sign of lameness. Dianne was so excited that I was the first person she called to tell about her success. One thing I can say for sure is that with proper hoof care and with a client who is willing to do his or her part of the rehab, an asymmetrical horse can be brought back to perform at the top of their game.

There is no better feeling than restoring a horse to soundness that everyone said was “done” and to hear the owner say, “You gave me my horse back,” and to see the horse and owner back working as a team, performing sound and pain free.

Jason McClure resides in Hutchinson, Kansas and specializes in trimming and shoeing and the competitive reining horse and the rehabbing of navicular and foundered horses. Check out Jason’s website www.jasonmcclure.net for more info on the Asymmetric horse and for future clinic dates close to you. 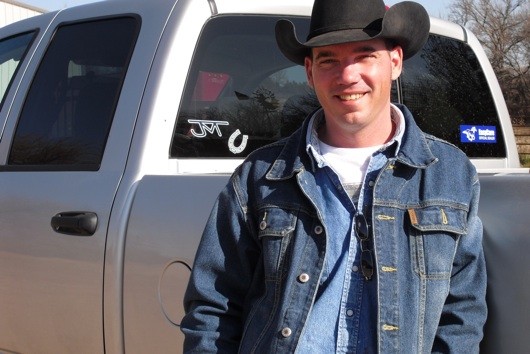 Jason relied on the comfort provided by the Easyboot Rx therapy hoof boot to keep this horse moving and moving correctly. Utilizing the Rx was a key element for this horse’s journey back to soundness. If you use the Rx in your practice tell us your story and help encourage others who may be going through a similar rehab situation. Your story could make all the difference in a horses life. 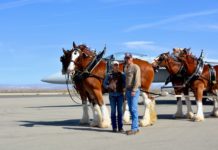 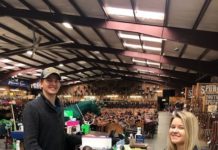