Jenny Moncur and I have just come home from a fantastic weekend which involved travelling 5+ hours each way with another special friend – Colette – to compete at our first 80km endurance ride in a long time.  My last serious ride was the National Tom Quilty 100 miler in 2009.  Since then I’ve had a bit of a holiday as I’ve brought along 2 youngsters and just completed 20km and 40km training rides.  Jenny is in the same position but more so, her last long endurance ride being in 2006.  My mare Joby was going to be completing her first 80km ride, and Jen’s mare Promise was under the 13-month rule so running to novice times as well.  Colette came along as Camp Boss and strapper, and did an awesome job of organizing us both so we could relax and enjoy the ride.

Weather where we live has been wet, wet, wet.  In the end I decided to wait until we arrived to glue on Joby’s Easyboot Gloves because the afternoon was forecast to be quite fine.  Her feet aren’t the best barefoot examples at the moment, with dodgy frogs due to persistent thrush from her environment.  I just wonder what so many of the shod horses hooves look like from a worm’s eye view!  So glueing on her boots seemed like the hassle free option to provide maximum comfort for the longer distance – Sikaflex cushions make her feel like she is striding across grass when she’s travelling along bitumen and gravel roads.  And the ride conditions were very “ordinary” – wet, cold, and plenty of mud – again another reason to glue to minimize time and effort checking boots between legs.  Jen had originally planned to do the 40km training ride but stepped up to the challenge on the day, so she was riding Promise in Easyboot Gloves with hoof pads.

Never one to be totally in the background, I pre-painted Joby’s Easyboot Gloves in bright blue to match my riding colours – it would have looked a picture if my shirt wasn’t hidden under wet weather gear!  I approached the glueing process with a typical aussie attitude of “she’ll be right mate” which probably should have been refined slightly but got me through nearly the whole ride without a glitch.  Yes Kevin I agree, boot fit AND preparation are key factors – I did lose one boot around the 60km mark but Jen spotted it flying off so it was easy to find! 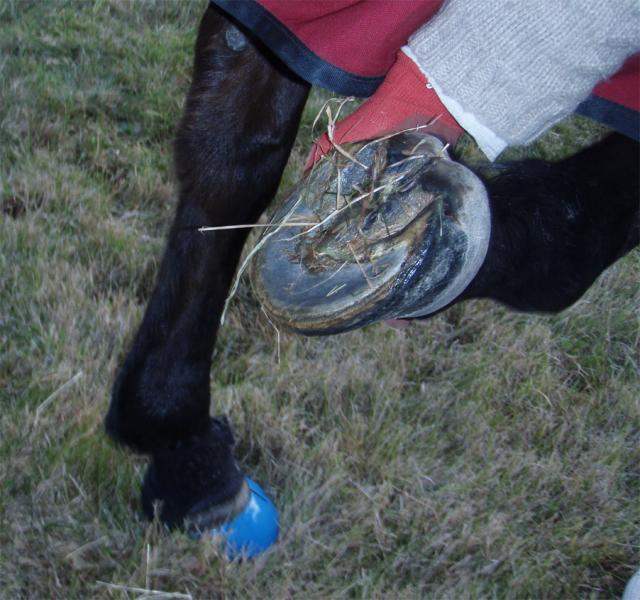 Each hoof was cleaned up on the sole with a hoof pick and then scrubbed with a wire brush, but remained moist due to the wet conditions of the past week.  I wasn’t worrying about the dampness as Sikaflex reacts in a positive way to moisture.  The hoof wall was dry-scrubbed of mud, but possibly a fine residue remained in places – the boots were definitely less bonded then normal.  Perhaps I should have given them an actual wash.

A little touch up trimming, taking off a bit more toe, just to help fit and breakover, and a light rasp on the hoof wall if I remembered.  This is her off-fore.  You can see she’s got a few trouble spots, a sad frog, and a bit of a flare to one side – a case of go with what you’ve got on the day. 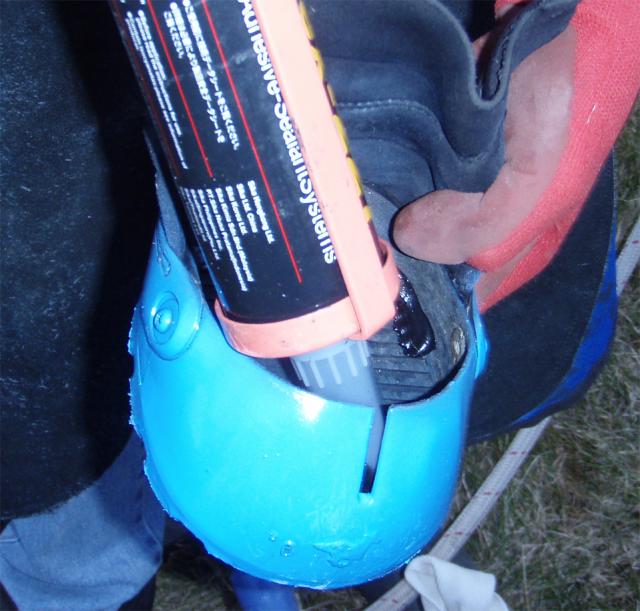 Starting to put a bead of sikaflex around the inner rim of the boot.

Doesn’t the boot look beautiful although it got covered in mud soon enough.  The gaitor is still attached at this stage. Again in hindsight, I could have used a greater quantity of glue – I hardly had any oozing out of the boot, and no mess on me at all – a dead giveaway when I think about it. 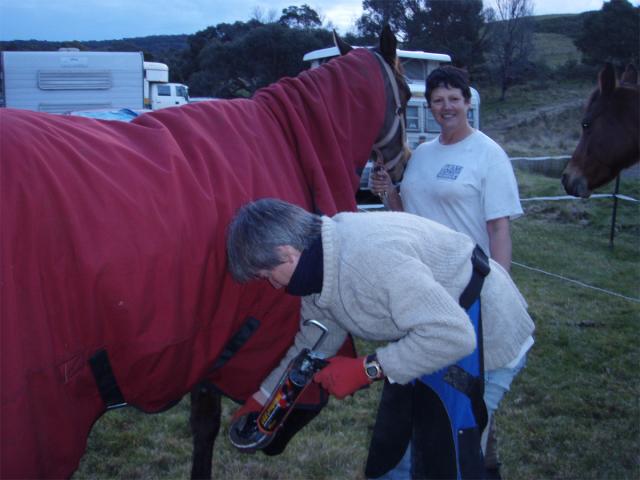 Putting the sikaflex on Joby’s sole.  Jenny is well dressed in her TEB tee-shirt, so am I under my woolly jumper.  We’re great friends with totally different ideas about temperatures.


I just squiggled a quantity of sikaflex onto the sole, into the collateral grooves, and the concave area of her sole, knowing that when her boot was put on, the glue would ooze into position as needed because it is quite liquid under pressure.  Boots actually go on easier too, because it acts like a lubricant on the hoof. 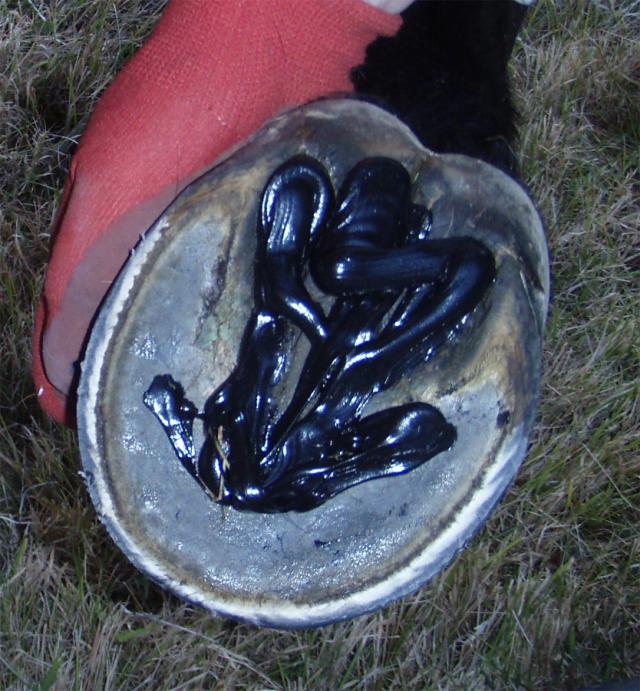 Once on, the gaitor is wrapped around to help keep the shell in position while the Sikaflex is going off, but I also added super glue around the rim. 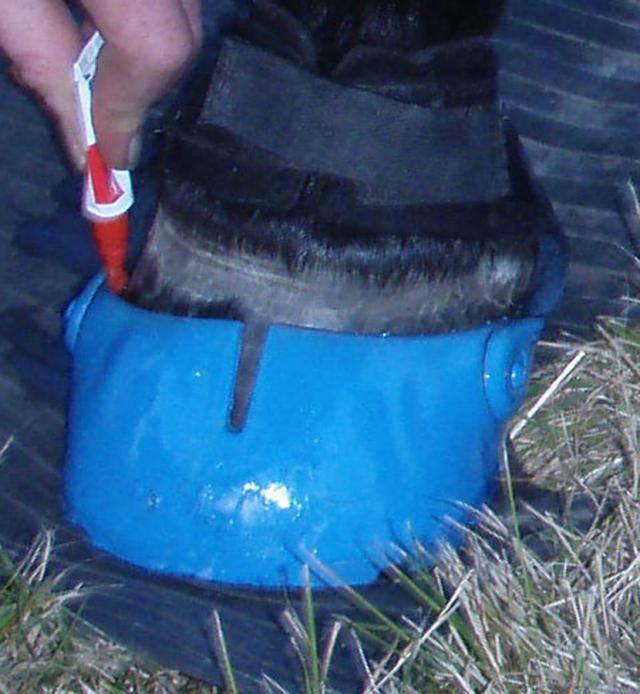 The fit isn’t that tight, the vee isn’t stretched at all, but she actually needs that size for length.  So 4 boots in places, she snoozes quietly in her yard, and we fill in the rest of the evening.  I think the whole process for each hoof took less than 10 minutes – I was pretty cruisy about it.

Around midnight the rain started – we must have brought it with us.  I listened to the leaks in the horsefloat where we were sleeping, and wondered what else would be getting wet – pretty well everything due to more leaks or just condensation.  A 6am ride start meant getting up at 5am to get organised.  Jen put on Promise’s Gloves in the rain.  I was one up on her via glueing the afternoon before although I did need to unscrew all the gaitors (Experience Tip: don’t clog up the screw heads with paint, otherwise the screwdriver won’t grab and undo the screw!).  We both got equally we saddling up the horses!

Off in the dark to start our first 40km loop.  Apparently it was really miserably cold and wet the whole day but we didn’t notice because we were having too much fun!  Joby took it all in her stride like a seasoned campaigner, taking her example from Promise who knew what it was all about.  We rode to the conditions and enjoyed nearly the whole loop.  One section was quite daunting to most riders – it was a very boggy slippery track up a very steep hill, and down the other side.  Yes the boots slipped a bit but we just sat quietly on the horses and allowed them to choose their path, trusting that we were safer on then off them. Promise did a couple of metre long skids on the way down and looked like an elegant ice-skater, totally relaxed and unfazed by the experience – she almost looked like they were deliberate by the way she coped!

Back in camp, great parameters for both horses although Jen was starting to feel the pain from an extremely dodgy ankle.  Out again in continuing wet and cold weather.  Although the rain cleared up intermittently, apparently temperatures never made it to 6 degrees celcius for the entire day (according to the weather chart it actually felt like only 1.5 degrees for most of it) – but the horses just kept going like they were having as much fun as me.  Jen was past it, but her attitude kept her going to the end.

Joby and Promise vetted through beautifully, with Joby winning the Best Managed Novice Horse Award which kept me grinning.  At a ride where some riders didn’t bother starting due to the perceived conditions of the track, we felt really comfortable about going ahead, knowing that we’d all be ok.  Mind-set is everything, setting yourself up in a positive way makes all the difference!  My attitude was easy to maintain – I knew that I’d rather be out riding than not, so I was happy.  Jen’s attitude was much stronger – it had to be for her to get over the pain and continue on.  We crossed the finish line together, knowing that the four of us have just passed one milestone and are now set up beautifully ready for our next adventure – a mini marathon in August.

Jenny was a little worse for wear after the event, succumbing to hypothermia, but was much better the next morning after sleeping with 2 hot water bottles and a Jack Russell Terrier 🙂

Lesson 1.  Dress for the conditions, even if you think you don’t feel the cold.
Lesson 2.  Be a tad fussier with preparation and enjoy the results.
Lesson 3.  Attitude makes all the difference! 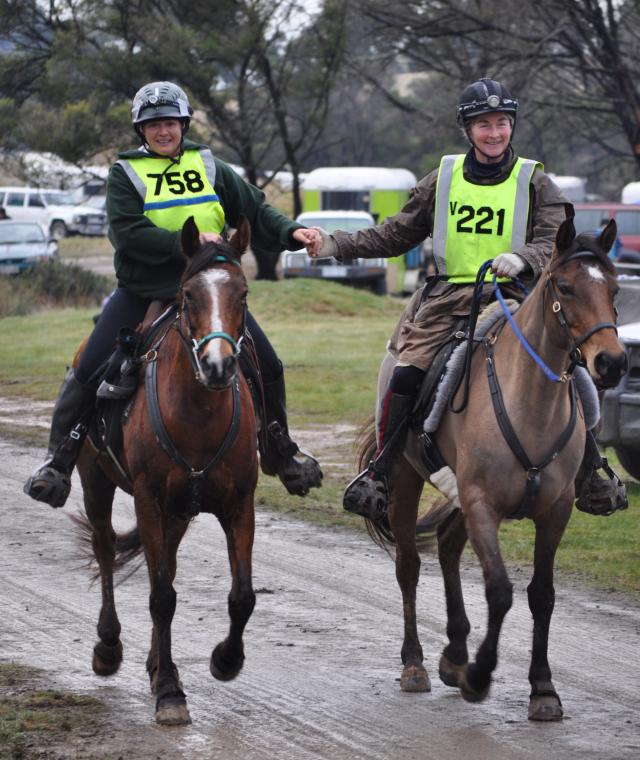