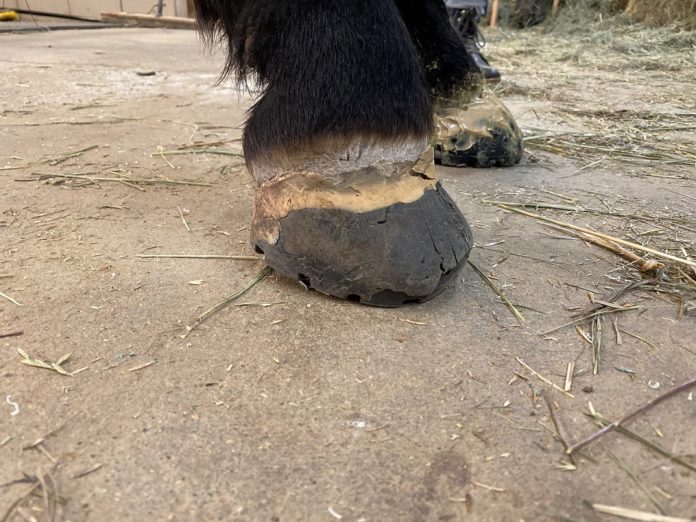 By Philip Himanka, APF-1, Not Only Barefoot, LLC

Earlier this spring, Elizabeth Riecks from Hatha Equus and Wildsong Ranch asked me to assess a horse owned by one of her boarders. The horse, Epona, had been adopted by Sophie Colmant from the Colorado Horse Rescue. While the rehabilitation process is on-going, I would like to share my strategy that worked as well as what didn’t work up to this point.

In October 2017, Epona was diagnosed with a previous injury and scar tissue of the deep digital flexor tendon (DDFT) proximal to the fetlock of the right hind. Phenylbutazone (bute) was prescribed for pain relief and as an anti-inflammatory along with shockwave therapy and strengthening backing exercises were also recommended to aid recovery. Epona had excessive wear on her toes, so shoeing was necessary before she could return to light work.

In April 2018, initial radiographs and ultrasounds showed that bone chips around the sesamoids had caused excessive proliferation of bone. The same recommendations were prescribed as described above. One month later, the heel of the right hind remained one inch off the ground when the tendons were fully extended.

In December 2018, Epona was diagnosed with subluxations, or hypomobilities, affecting the sacral apex left, right superior SI joint, bilateral hocks, wither, left C1 and C6, proximal C2, and right shoulder. All of these dislocations were likely compensatory consequences of her injury. Epona received additional chiropractic treatments to support and improve her range of motion.

When I first evaluated Epona in the spring of 2019, I found that the fetlock, pastern, and coffin joints of her left hind were stiff and locked. As a result, she was bearing weight primarily on the left hind toe. Epona was dragging her left hind leg to the point that the metal shoe that had been applied only three weeks before was almost completely worn at the toe.

Given the wear on the shoe, I knew that re-nailing it would compromise the integrity of the hoof wall. I decided to replace the metal shoes with Easyboot Glue-On shells using acrylic glue.

The purpose for this specific application on the right hind was three-fold: 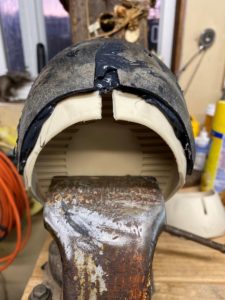 For the left hind, I applied a superficial layer of Equi-thane SuperFast™ adhesive (Vettec) at the toe of the shell. 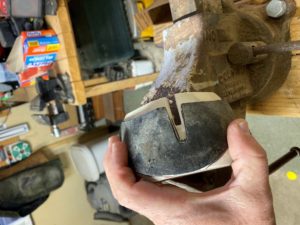 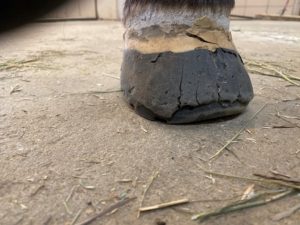 The rigidity of the adhesive layer led to cracking and premature separation from the shell at the toe.

Interestingly, while I had to remove and reapply the shell earlier than expected, it showed far less wear at the toe when compared to the metal shoes that had been previously applied. 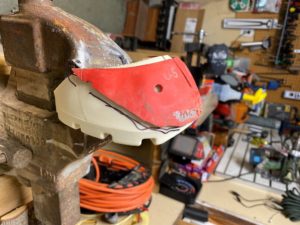 To address the separation at the toe, I constructed a reinforced shell. This shell is comprised of the base Easyboot Glue-On shell coated with ShuFit Black adhesive (Glue-U), over which I applied the wall of the toe cut from another shell. This shielded the adhesive layer and further served to extend the toe.

Using this reinforced shell, Epona now puts weight on her left hind. More importantly, we are now on a six-week gluing cycle with very little wear on the toe of her left hind. 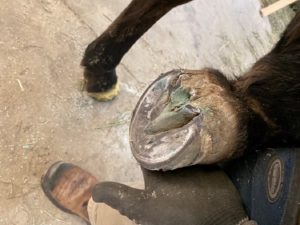 Additionally, throughout this process, the Easyboot Glue-Ons have helped transition her to barefoot in the front, resulting in healthier soles and frogs. This supported her progress immensely, along with the daily therapy provided by Sophie.

Teamwork was a crucial component of Epona’s rehabilitation. I collaborated with her owner, Sophie Colmant; her current veterinarian, Dr. Sarah Appleby; and Elizabeth Riecks, who provided equine yoga three or four times per week.

Epona is moving much more comfortably these days thanks to our combined efforts and some innovative hoof care products.