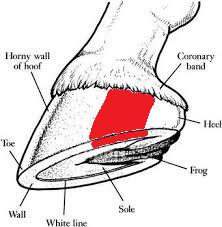 One of my young colts came in with a gnarly flap of hoof wall broken off of the medial heel of his back right hoof. I have no idea how he did it. The “flap” of hoof wall was about 1.5-2″ wide. He must have been running and whatever his hoof landed on must have been very firm because it cracked all the way up to the coronary band and peeled it off of the lamina. The flap of hoof wall was free and flapping, attached only by the meaty coronary band at the top. I regret that I don’t have initial pictures to show you because we were busy treating it, the image below should give you an idea of what was missing.

At that point we decided to remove the flap and debride the remaining tissue. There was no hoof below that section of the coronary band. We then packed the area with antibiotic paste and applied a cast to the hoof. We had to keep the cast dry so the colt was on stall rest and miserable. We were able to take him for walks when the ground was dry. The cast (miraculously) lasted five weeks. The vet’s recommendation was to re-cast it for another five weeks, however, my husband and I decided to put an Easyboot Glue-On over the hoof instead. This would allow the colt to go back to pasture and be happy/healthy/normal. 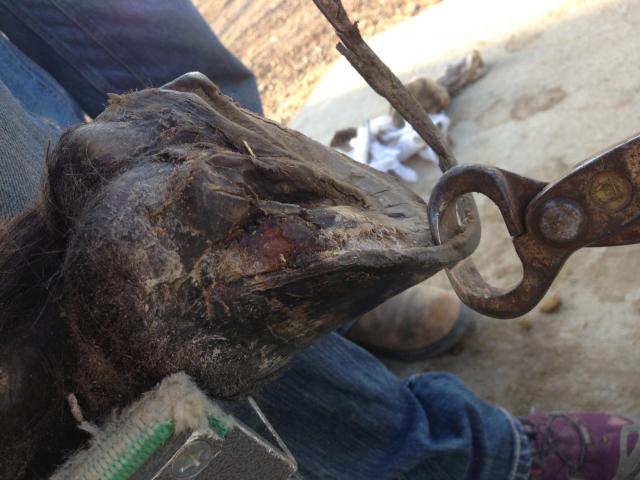 Here is the hoof straight out of the cast, you can see how much he grew while in the
cast those five weeks. I wanted to trim him very short to reduce any leverage opening
the wound, and I also planned to leave the Glue-On on there as long as possible.

We did the normal Glue-On procedure with Adhere but we used the old Equi-Pak Copper Sulfate (“CS”) protocol to pack the sole instead of Sikaflex (you drill the holes in the bottom of the boot to insert the mixing tip and inject the CS). We also repacked the area of missing hoof wall with the vet’s antibiotic paste, then sealed that whole quarter with CS instead of Adhere, so there was no adhere right around the wound. 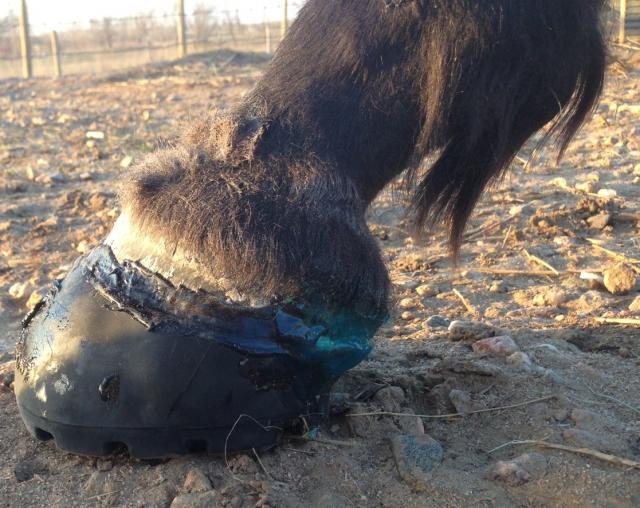 The Glue-On boot stayed on for seven weeks and it would have stayed on longer but we removed it. (Note: EasyCare recommends removing Easyboot Glue-Ons after five days in a wet environment or after ten days in a dry environment). We were prepared to clean him up, give him a trim, and apply another Glue-On but it was not necessary. The hoof was healthy and healed – it only needed another trim and we turned him out. The colt was able to go back to pasture during his rehab/healing process, and be active – I think this allowed his hoof to grow much faster than it would have, had he been couped up in the stall with a cast. The new, upper, hoof growth is perfectly normal now, there is no coronary scar and no hoof growth scar/lines. 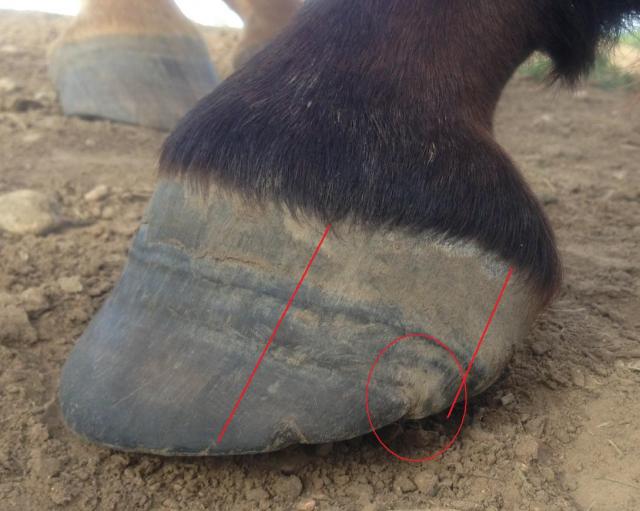 Here is the healed hoof, about 13 weeks after injury. There are significant stress bands
in his hoof from his very “stressful” time in the stall, he clearly did not enjoy being inside.
I’m glad the Glue-On allowed him to live a normal life in the pasture while helping him heal.