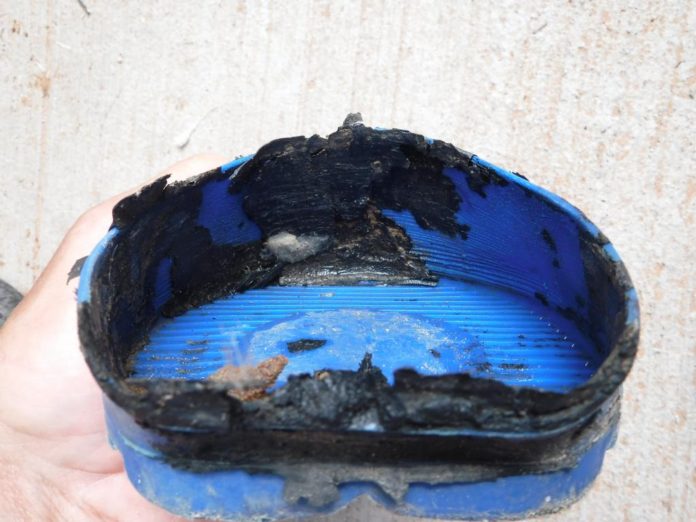 After the gluing of Easyboots to the hooves, the question in our minds is often: “How well did I do the job?”. Then we wonder, or worry, for a while. Unfortunately, often we do not get a good answer till either a Glue-On shell comes off before we want to remove it or till we actually decide it is time to take them off. If one or two boots come flying off prematurely, we get our answer: somewhere something was not right. Possibly the hoof or boot was contaminated, be it that the glue was too old, had been left in the summer heat too long, or the boots were applied in too slow a time. Study the hoof wall and boot to investigate the cause of the failure.

If the normal time comes to remove the boots, EasyCare recommends 10 to 14 days after application, we get a a second chance to evaluate our previous work. How easy it is to drive the screwdriver between the hoof wall and shell? How easy or hard is it to pry the boot off the hoof? Obviously the harder it is to get the boot off, the better a job we did gluing it on before.

Best way to really get analytical, though, is when we take the time to really critically examine the glue left in the boot after removal. A lot to learn can be learned by ‘reading the boot’.

Below a few examples of pulled EasyCare Glue-On boots. In the first blue shell black Vettec Adhere was used, in the following ones beige Adhere. Easier to interpret the glue script with the beige Adhere, especially in the black shells. 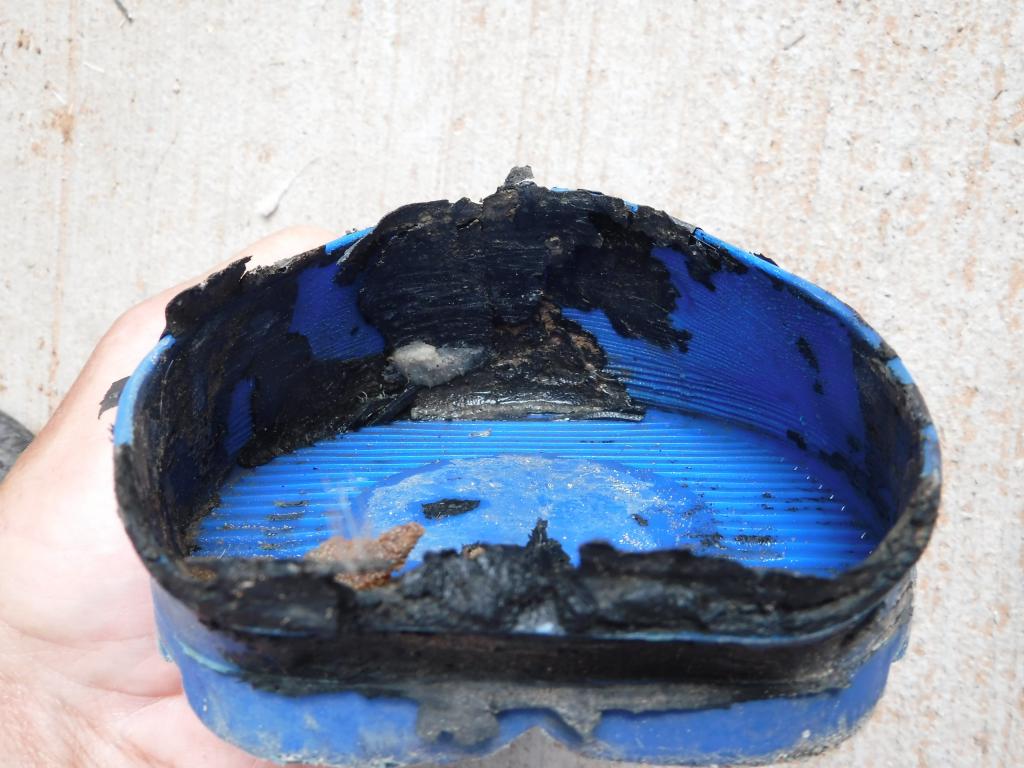 Not a bad glue pattern: half of the glue is left in the boot, the other half on the hoof wall. Hoof wall and boot shell were properly prepared before gluing, glue has appropriate thickness. In the toe hoof wall/sole area, the Sikaflex used in the bottom of the boot has pushed up slightly. 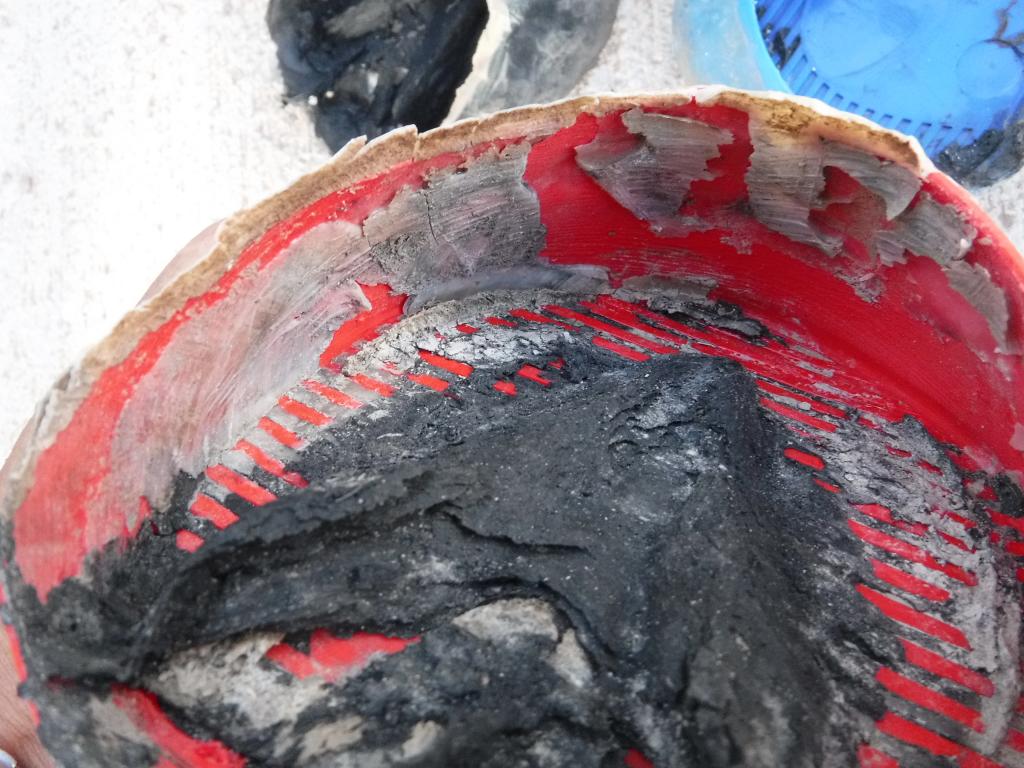 Similar picture, one can be happy with this kind of glue picture.

Different scenario in the one below: 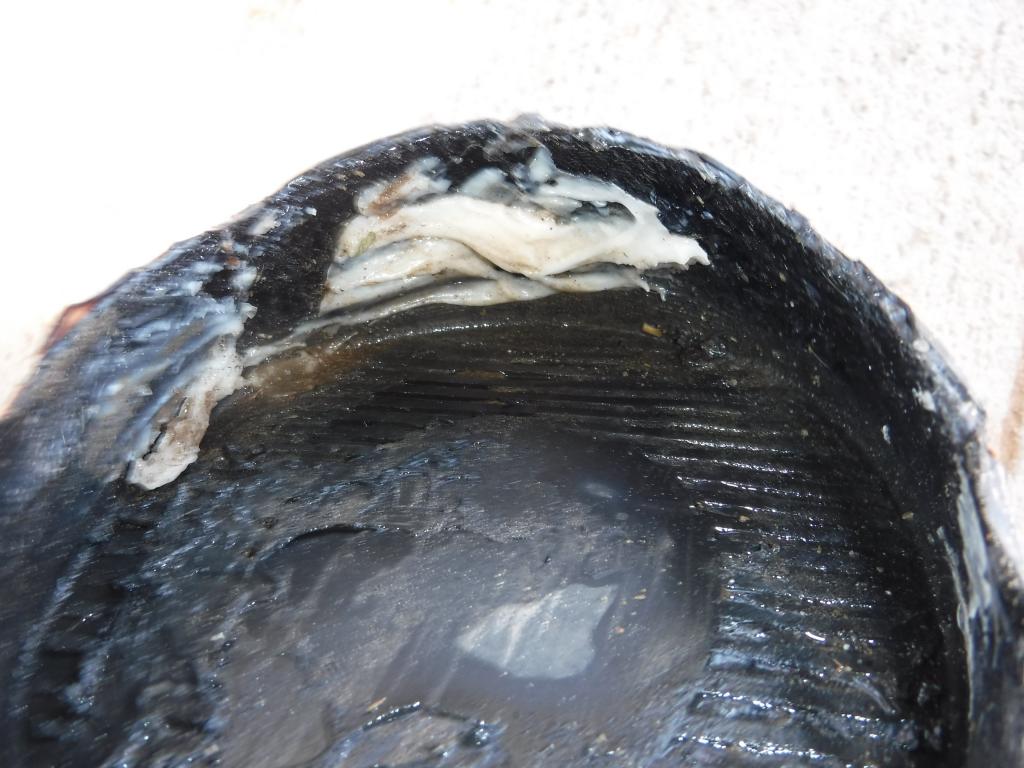 Looks like we were a little slow with this one: the glue had already started to set before it was applied. 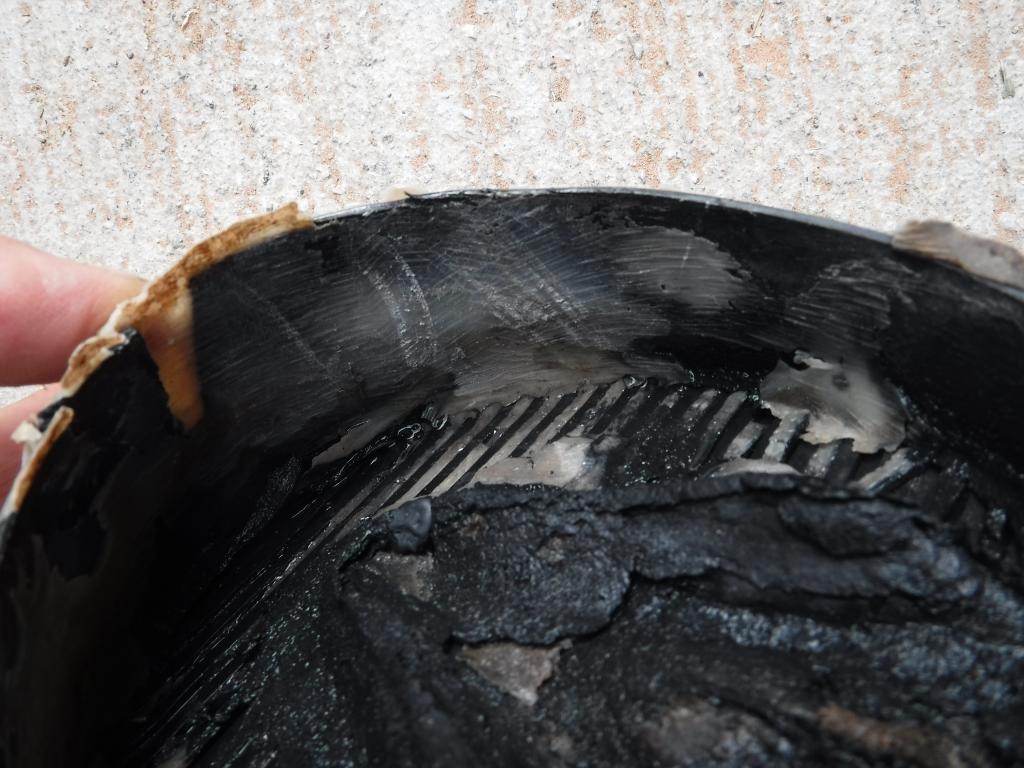 The glue here was probably either applied a little too thick or too low on the wall of the shell: excess glue ended up in the sole area. With a thin soled horse, this could cause pressure on the sole with resulting lameness. Something to be avoided at all cost.

Too much Adhere in the frame below as well? 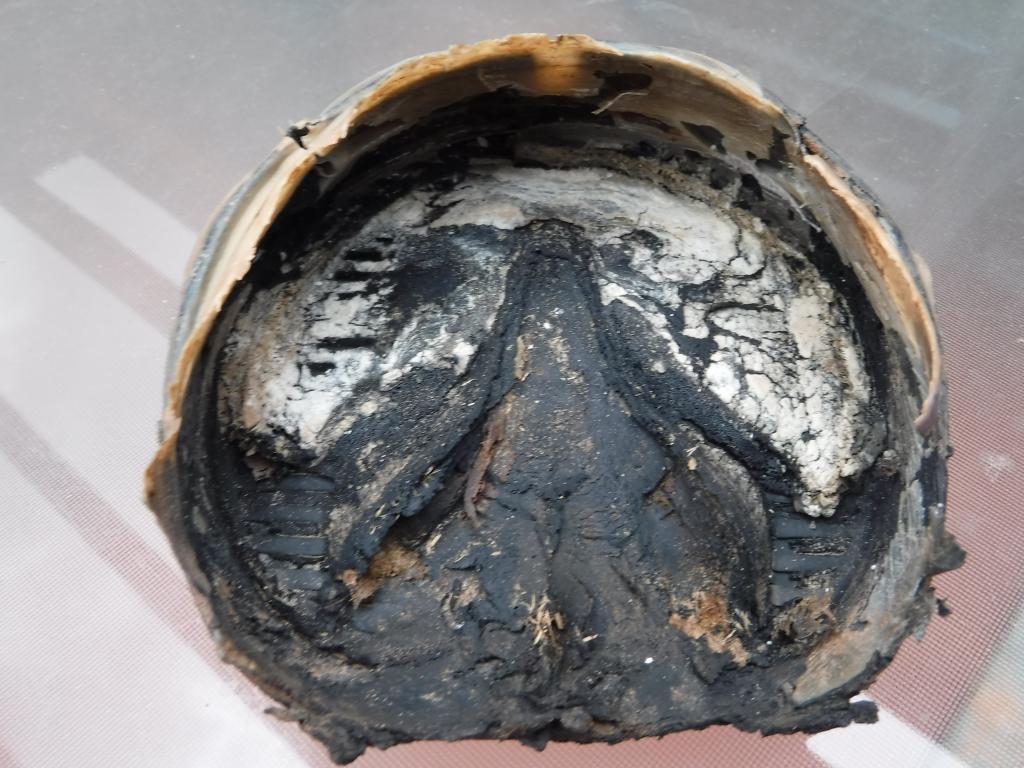 The white stuff in the sole here is not glue. It is dead sole that is now stuck to the glue in the boot. Quite normal. That hoof had a little more dead sole left before the application. The sole of the hoof was obviously well prepared, dry and clean. 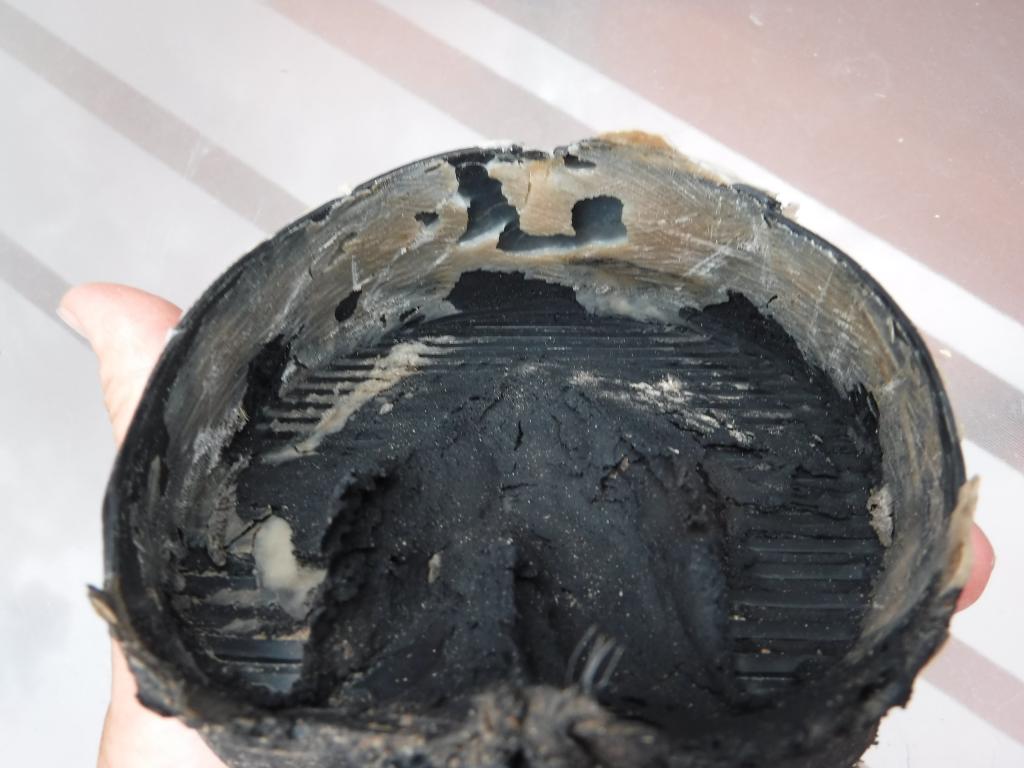 The residual glue in the toe area is a little thick. Possible causes could be:

-the boot was not set back properly, the rubber mallet was not used hard enough

-the dorsal hoof wall was not straight 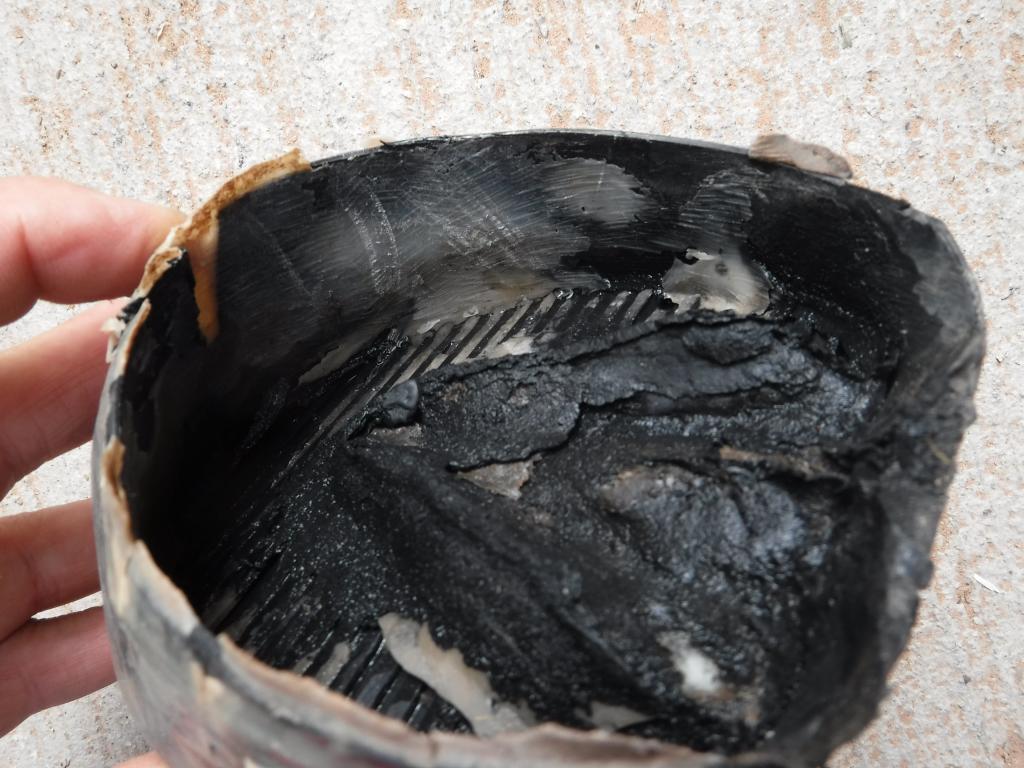 All the glue is on the inside boot wall. Check the hoof wall, if there is no glue left on it, we can draw conclusions that the hoof wall was either not totally dry or otherwise contaminated. 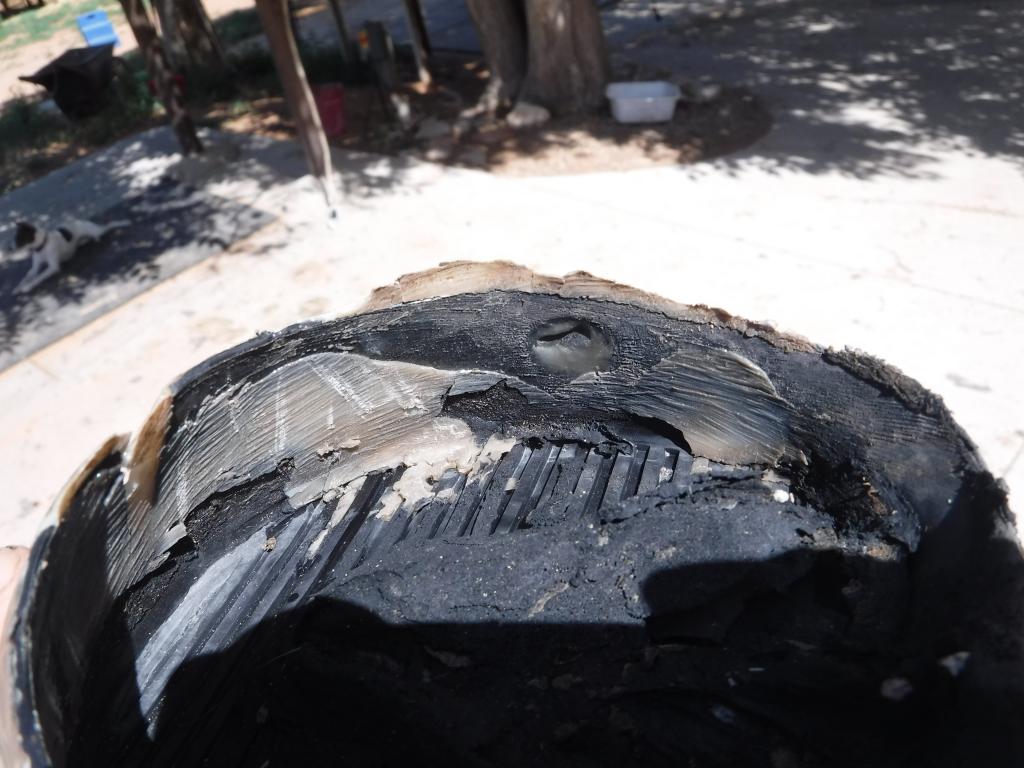 At first glance, it looks like a good gluing job: partial glue left inside the boot. A closer look reveals smooth glue edges. Probably not enough glue applied to the wall. More dorsally we also notice too much glue in the sole area. An uneven glue application.

If your Glue-On boots show any of these patterns, it might be a good idea to revisit the video from EasyCare regarding gluing on Glue-On boots.

For tips and tricks on how to clean out residual glue, please visit my blog from last month.