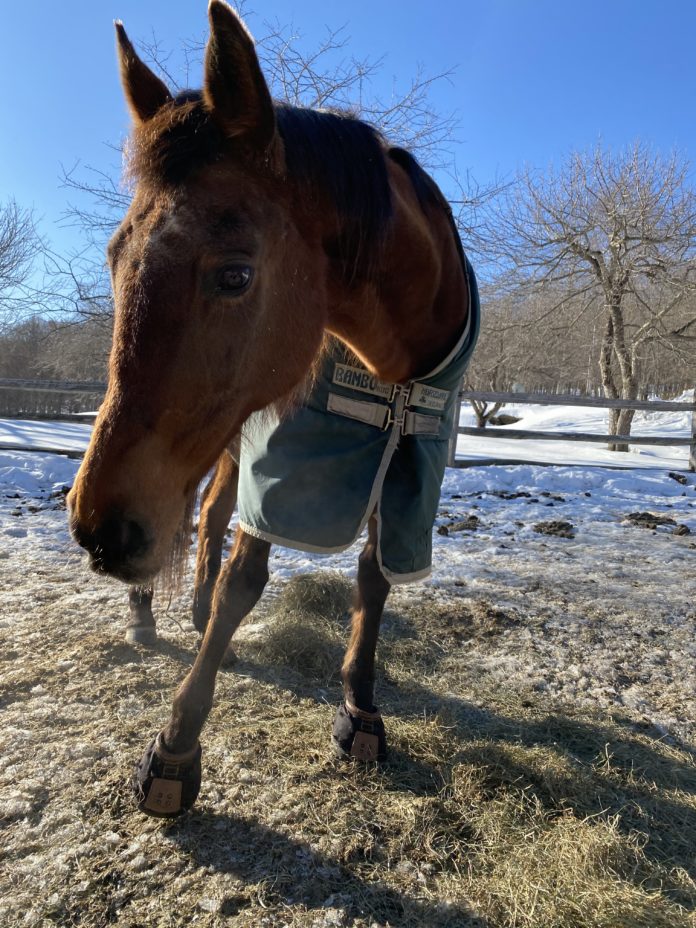 Written by Christina Krueger, a Hoof Care Practitioner based out of Manchester Center, Vermont

I met Pip, an older Thoroughbred mare, in the fall of 2020. Her owner called me originally concerned about her gelding. She didn’t think that Pip would be able to make a good transition to being barefoot due to a history of tenderness and overall poor hoof quality. When I saw her, I knew that she was going to need some protection, but the shape of her foot wasn’t going to make it easy for a glue-on shoe or even a cast to stay on. Her heels were very contracted, she had thin hoof walls, zero concavity, and toe-first landings.

I agreed to pull her shoes and give this transition a try, as long as the owner was willing to do booted turnout. She agreed, so off came the shoes. I also gave some advice for tweaking her diet to be more forage-based and to add in some mineral balancing (Vermont Blend with timothy pellets, maybe beet pulp and free choice hay) to help aid healthier growth.

I decided to fit Pip for some Easyboot Trail Originals because they are forgiving for different shaped hooves and will accommodate a thick pad, which she was going to need for comfort. Her hooves would be able to breathe while she was in her stall at night on mats and shavings, and then have protection provided by the boots when she was turned out during the day.

When I fit Pip for boots in the fall, there was a lot of mud and the tread allowed her to navigate a hilly, muddy paddock, as well as a large grass pasture. Once ice and snow came into the picture here in Vermont in November, we added some quick studs to the boots. After her first trim (which was pretty conservative, mostly just bringing the toe back some), Pip was still landing toe-first, even with 12mm black comfort pads. I suggested that the owner do no more than light riding until we had made some progress. With winter coming and no indoor riding options, this was an ideal time to give this kind of rehab a shot.

When I came back four weeks after her first trim, I was astonished by how much her heels had already spread in such a short time! She had some good sole growth, as well, and she was landing more flat than toe-first.

After another six weeks went by, her heels continued to spread and it was clear that she was building a more robust digital cushion. The next exciting change was that her heels had started to migrate back underneath the bony column, which told me that she was starting to use her caudal hoof more effectively. The heel tubules started to straighten, and while there is still a lot of improving that is likely going to happen, this is all a great start for what many would have thought to be a horse that just “always needs shoes!”

The Easyboot Trail Originals were ideal for this situation because while I knew this rehab was going to require some serious padding, the horse was very mobile and I knew she would need something robust to stand up to turnout. The boots also gave the owner the ability to ride in the beginning phases of her under-saddle rehab, which is starting now that we have some nicer weather here in Vermont. We may end up switching to something like the Easyboot Glove Soft for riding down the road once her feet strengthen and develop a more natural shape, but for now, the Trails have been great as a turnout/riding option!

“The EasyShoe Versa Grip Glue supports the health, integrity, and structure of the hoof.”