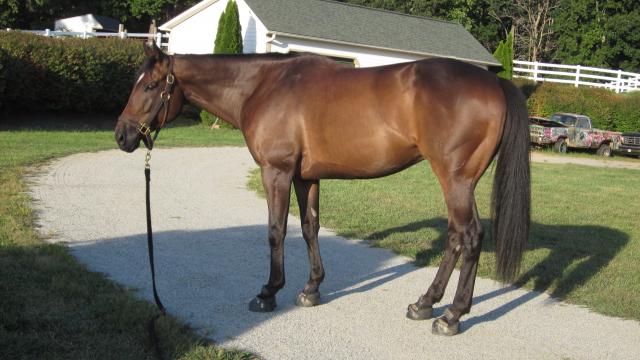 Phoenix in his EasyCare boots.

I met Phoenix exactly 4 years ago when he was a newly gelded 3-year-old and I was nearly 50.  He was looking for a home at a bargain price.  You see he was a Thoroughbred, bred to race, who as fortune would have it “didn’t like to run fast.”  I fell in love with him at first sight even though he was underweight and a lot of horse to handle.  I told myself his problems could be solved with some good groceries and kindness and wrote the check with enthusiasm.  So that I wouldn’t have to worry about his feet while we were adjusting to each other, I had metal shoes put on immediately.  That was the first and only time.  I began to notice that his natural gait was very low to the ground and that he dragged his back toes with almost every stride leaving him with an unnaturally square toe.  I investigated possible nutritional, behavioral, structural and developmental causes for his gait.  I concluded to the best of my ability that was his way of going and so long as he remained sound I’d do my best to work with it and continue his training.  We immediately began a diet to support good hoof growth and when the shoes came off I didn’t replace them.  I wanted to have complete control over his feet so I could keep them balanced and short and started trimming them myself every couple of weeks.

I realized I would need the help of protective gear for his feet since I planned an athletic future for Phoenix.  I had seen EasyBoots on the market for many years and realized it was time to give them a try.  I loved having various designs to choose from.  We started out with Epics all around.  His front feet were easy to fit snuggly, but not so much in the rear.  He’d wear the buckles off of the epics by dragging his feet, still his precious toes were nicely protected.  Eventually we settled on Bares.  They go on nice and tight and have a ‘toe shield’ on the front as if they were designed specially for my horse.  Because Phoenix was so tough on his boots I had to learn to make repairs.  Since my local dealer was less than supportive, I went directly to customer service at EasyCare, Inc. with wonderful results.  I learned it wasn’t too hard to work on the boots and rather than tossing old boots I cultivated an extensive bone yard for scavenging parts. 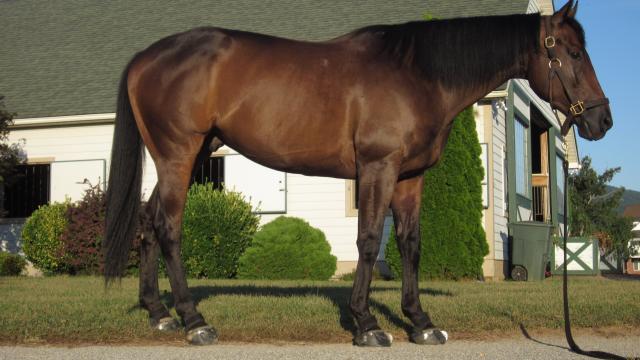 Easyboot Epics on front and Esyboot Bare boots on hinds.

Phoenix continued to get plenty of exercise and good nutrition and the quality of his hooves was better than I expected.  Imagine that, a Thoroughbred with good feet?!  Two years ago we started experimenting with limited distance endurance racing.  He finished the races sound.  I was thrilled.  During one race we rode through a severe thunder and lightening storm with multiple stream crossings and flooded trails.  I lost a boot.  At the vet check the farrier was about to put on a metal shoe so we could finish the race.  He commented that it was a shame to nail a shoe onto such a healthy hoof.  At that moment, as if by magic, the missing boot was found and returned to me by one of the riders.  We were able to reboot and continue the race.

Thanks to EasyCare, Inc. for a great product and superb customer service!

Do you have an ex-race horse that you are rehabilitating? Are you going barefoot?