One of the reasons I was so proud that Uno completed the NASTR Triple Crown (a 50 miler in the spring, 75 in the summer, 100 in the fall) in 2010 is that it is definitely an exercise in keeping your horse sound throughout the year – a competition of attrition.

This year we didn’t fare so well.

Uno and I were pulled from Phase 2 – NASTR 75 – on Saturday at 25 miles when he came up lame. In retrospect, I think it’s likely that he compromised himself chasing Fergus and then Fancy during the two days (50/50) at the Washoe Valley ride last month. He had to stretch to keep up with their long-legged strides and I was thrilled with how well he did – but at what cost?

He got a month off, but then seemed a little sluggish during a long, slow training ride two weekends ago, and never really seemed to pick it up properly at NASTR 75 – hardly surprising since evidently he was nursing a sore tendon. 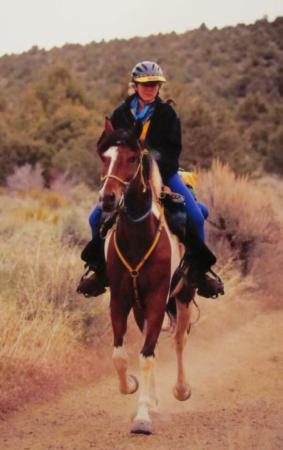 He didn’t show up lame until literally half a mile from the vet check as we were slowing to walk in and he suddenly took a few funky steps. I’m hoping this means that we caught the problem early and the damage is minimal, but we’ll be visiting the vet soon for an ultra-sound to find out the extent – and pray to the endurance gods that it’s minor and he’ll be back on the trail soon.

On the flip side, it poured with rain and my stirrup attachment broke off the saddle at 7 miles, leaving me with a jury-rigged stirrup leather that may or may not have held for the next 68 miles – so from that point of view, perhaps the pull was a blessing in disguise.

On the plus side, his glue-on boots held beautifully. Predictably, we ended up gluing by flashlight on Thursday night. Although my caulking gun had gotten damaged, we still managed to squirt a triangle of Goober Glue hoof-pack into the bottom of the boots in the frog area, while using Adhere for the side walls.

The first three boots went on smooth as silk and I smugly foolishly mentioned to Patrick how well it was going. Of course, at that point, it all went horribly wrong. I forgot to check the tube of Adhere I was using and was half-way through smearing glue in the final boot when the tube ran out. ACK!!! Luckily I was able to flatten the glue that was already in there while Patrick ripped open a new tube, and could therefore reapply more glue to that surface.

Uno’s back boots are still on (scheduled for removal Tuesday evening, in between icing and medicine dispensing), but his front boots were quite a struggle to get off, so I’m confident they would have held for the entire 75 miles of lovely NASTR rock. 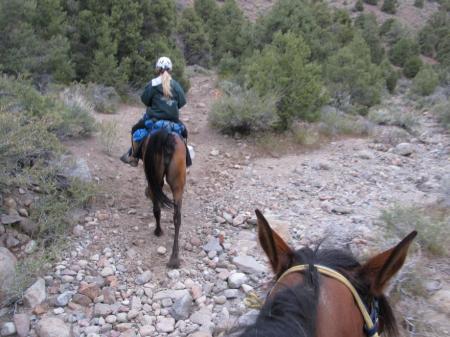 One of the many dry creek crossings in Illinois Canyon, about 15 miles into the 75 mile ride 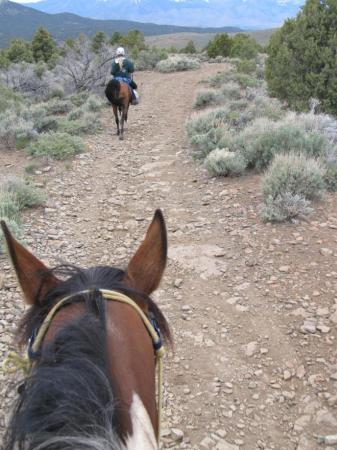 NV feels it builds moral fiber to deal with rocks, so they import them specially for the ride.

In applying the Adhere glue to the glue-ons on Thursday evening, I did learn a valuable lesson (other than the obvious one of not mentioning “how smoothly everything was going”). I have fairly small hands and always have difficulty steering the glue gun one-handed while I rotate the shell in my other hand.

Well, I figured out a technique to make it easier.

Kneeling on one knee, I prop the gun across my other knee so that I can work the trigger without having to support the weight of the gun – and can better direct the schnozzle where I want it. This results in a more even coating of glue – and glue where I want it, as opposed to where I don’t (in the bottom of the shell, all over my hand, on the floor, etc). 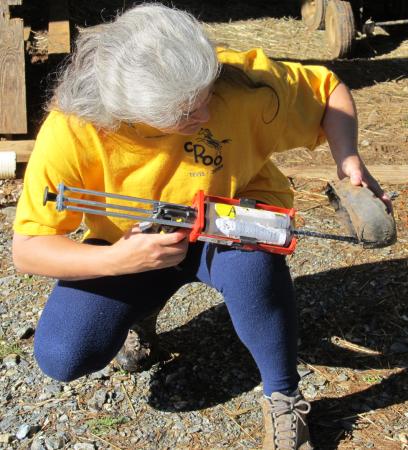 Here I’m demonstrating the technique. Of course this is a “staged” photo. It’s well known that it would never be a) sunny or b) even daylight when gluing boots.

Using this technique also means that you can put the shell down on the ground to reorient it when you realise you’ve twisted it in such a way that you can’t get at the part you missed in the first pass.

Fingers crossed for Uno’s recovery – and I guess it’s time to get my best-beloved Roop out of mothballs, dust him off, and get him up and running again.