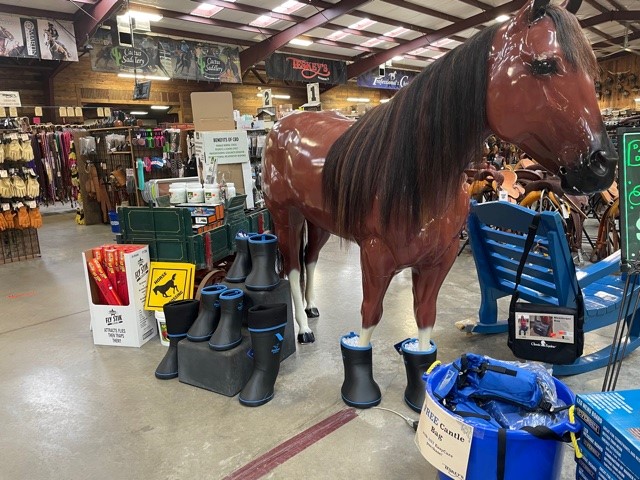 EasyCare is proud of our long-standing relationships with some of the largest, most respected, equine care companies in the world.

We wanted to highlight Teskey’s Saddle Shop & Apparel, located in Weatherford, Texas. They are great at making creative, eye-catching displays! We especially like their display showcasing the new Easyboot Remedy.

In 1998, Michael and Anissa Teskey moved to Weatherford, Texas, the cutting horse capital of the world, and opened a saddle and tack shop.

Weatherford, located about thirty miles west of Dallas-Forth Worth, is a burgeoning community steeped in tradition and western heritage. If Fort Worth, Texas, is “where the west begins” then Weatherford is where the west lives on.

Michael and Anissa sensed a need they could fill in this community and opened their first saddle and tack shop in a small storage facility close to the highway.  Teskey’s began offering EasyCare products there in 2001.

The store received a strong and very positive response from the local equestrian community. Michael and Annisa worked hard to meet the needs of their customers and soon had to expand to a second location. And then a third. Before long they had to consider land a little further west down the highway.

In 2004, construction began on a 40,000 square foot facility just off I-20 and 35 minutes from the Will Rogers Equestrian Center in Fort Worth. Saddles filled the floor and tack lined the walls. No matter what equestrian discipline you preferred,  Teskey’s had the gear you needed.

But what about clothes? Jeans, shirts, hats, and boots? In 2005, the store’s front porch was enclosed and became the new clothing outlet.  Teskey’s Cowboy Headquarters was born. It was such a hit that in 2006, a 20,000 square foot addition was added to the east end of the building for the clothing store.  Teskey’s clothing inventory rapidly evolved beyond western wear to include popular brands such as Patagonia and The North Face.

The enclosed front porch became the  Teskey’s Cafe, operated by Anissa’s mother, Melissa. While the company was growing, Melissa had cooked lunch for the employees once a week. Once the space that was formerly the clothing store was available, Melissa opened the cafe to all employees, customers, and locals. The  Teskey’s Cafe became well known for fine country cooking across the county.

The  Teskey’s Cafe has grown to become  Teskey’s Cafe and General Store with a selection of gifts and canned goods along with the same great cooking that can satisfy any appetite.

But what about hay and feed?  Teskey’s has saddles, tack, boots, hats, and even a place to eat. But what if you could bring the trailer and get hay and feed while you shop?

In 2007, the  Teskey’s Feed Barn opened and quickly expanded to include multiple hay barns and about an acre of fencing and farm supplies.

And don’t forget your pets! Teskey’s carries a complete line of high quality pet foods and supplies including beds and toys. Customers are welcome to bring their dogs to the store as long as they are leashed and don’t get riled around other dogs.

Teskey’s continues to grow. The newest addition is an outdoor store across from the clothing store that caters to the outdoor enthusiast with guns and gear. The Teskey’s Outdoor Store is also the new home to a massive inventory of men’s boots. Get your boots, get your guns, and get outside!

If you get a chance, come explore 100,000 square feet of equestrian heaven. Browse through over a thousand saddles, tons of tack, all the clothes, guns, gear, and one of the largest selections of Case knives in the state!

Today, Teskey’s has over a hundred employees dedicated to customer service and meeting the needs of the equestrian community both locally and online. If you can’t get to Teskey’s in person, then get to teskeys.com to find what you need. Teskey’s ships worldwide and strives to have what you need and get it to you when you need it.

Teskey’s is truly your one stop shop for you and your horse!

Teskey’s has been delighted with the products and services provided by EasyCare since 2001. Dee Reiter is the EasyCare representative that works with Teskey’s. Those at Teskey’s say, “She is very knowledgeable, answers any questions, and helps with customer concerns. Dee is wonderful to work with!” 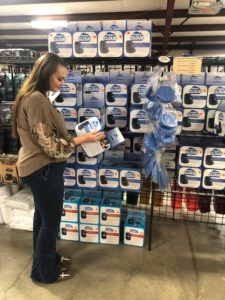 Several Teskey’s customers have left feedback on the success they’ve had using EasyCare products. The most popular boot at Teskey’s is the Easyboot Cloud.

One customer had purchased a pair of Easyboot Clouds for her off-the-track Quarter Horse. His feet were in terrible condition when she purchased him. She purchased Clouds to help him move more comfortably while his feet grew out. She said, “The Clouds were durable, easy to put on and take off, and made a tremendous difference for my horse.”

Another customer had a horse that was mainly used for trail riding. Even with hoof supplements he continually lost shoes, though. In an attempt to get his hooves healthy, this customer pulled his shoes and rode in Old Mac’s G2 boots. The boots worked so well that she never put shoes on this horse again. As a result, all of her horses went barefoot and only wore boots when necessary on rough terrain. This very happy customer has convinced her friends to use boots as well!

Thank you to Teskey’s for sharing their story. We value the support and partnership we have with Teskey’s Saddle Shop & Apparel. We look forward to working with you for many years to come.

It Really Is Versatile- The Name Doesn’t Lie!