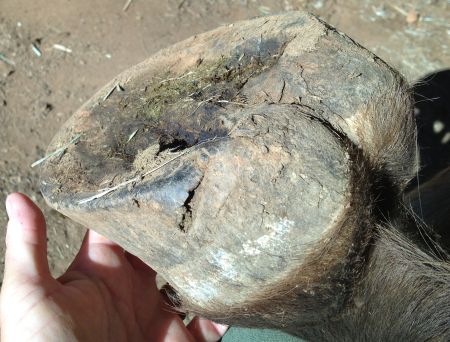 Fergus’ scalped heel – perfect timing meant that it had grown down so his weight-bearing heel buttress was effectively 3/4″ square by the time the NASTR 75 endurance ride rolled around. <sigh>

In late May it was time for Part 2 of our Triple Crown attempt – NASTR 75 endurance ride. Typically, I don’t bother gluing on boots for 50 mile rides, but when the distance gets up to 75 I start to lean towards using Glue-Ons. In Fergus’ case, he’d probably do fine in Gloves – he’s never had any rubbing from the gaiters – but it seems to be better safe than sorry.

Months ago during the winter, Fergus had either scalped the back of his foot or blown an abscess, because he had a big slice in heel. I’d been watching this hole grow out steadily over the months and knew—without a shadow of doubt—that it would reach the bottom of his foot at the worst possible moment. And sure enough by the time NASTR arrived it had reached the ground and half the hoof wall at the heel on that side was collapsed due to not being attached, leaving him a tiny 3/4″ square heel buttress to stand on. Not ideal when you weight 1,100 lbs.
I poked around this area for a while, trying to figure out how best to deal with it – trim, or leave it alone? In the end, I mostly left it alone and rasped what remained of the rest of the heel very conservatively. It seems, however, that gluing on a boot protected the area beautifully, offering extra support and safeguard from further damage. We had absolutely no issues from his manky heel whatsoever. 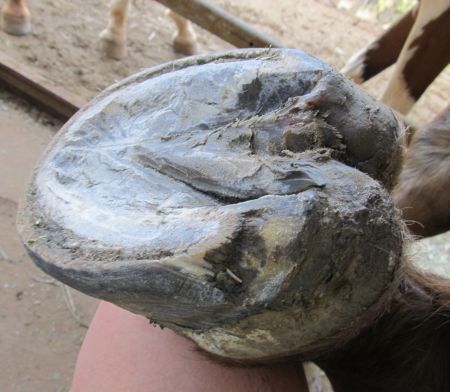 The same foot a week later, after being freshly trimmed following the 75 miles at NASTR. The manky heel should grow out fine now, even if it doesn’t look great at the moment.
So, on to applying Glue-Ons to the horse’s foot. The same system applies for putting them on, as taking them off – install horse in front of hay bag and get to work. Lay out your tools within easy reach ahead of time and mentally go through the motions of what you’re about to do.
Hoof Preparation
Clean all mud and debris off the hoof wall and out from the sole. You want that foot to be as clean and dirt free as you can manage. Some people use a wire brush to scrabble the dirt off.
In the early days of gluing, when told “rough up the hoof wall” I thought this mean to rough up the surface by taking some large gauge sandpaper and cleaning the surface of the hoof off with it.
Not exactly.
What you need to do to the hoof is similar, but somewhat more aggressive. With the edge of the rasp, ideally you want to scrape cross-hatching into the hoof wall to give the glue something really good to grip onto: 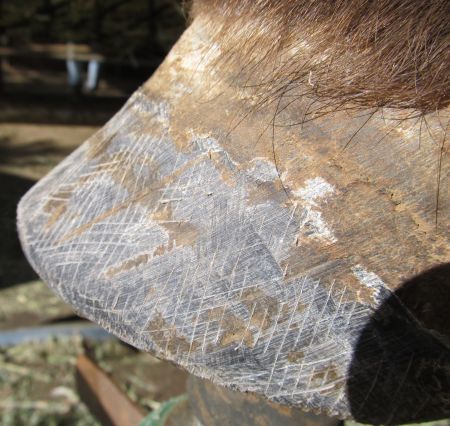 This cross-hatching on the hoof-wall is all but invisible within a day or so of taking the glue-ons off.
I also wipe the foot with denatured alcohol “just in case”.
Gluing
Because Goober glue (now Sikaflex) takes a while to set up, at this point you have the luxury of adding some extra spiffy touches before getting to the actual gluing-to-the-foot part.
The first thing is to squeeze out a bead of goober glue around the inside bottom edge of the shell to prevent any hard Adhere from being forced down the sides of the boot and getting under the sole as you push the boot on. I’ve had Adhere get down there a couple of times and it has been one of my biggest worries – the last thing you want is a hard lump in the bottom of the boot. As it turned out, this bead works beautifully – forming a squishy anti-Adhere barrier. 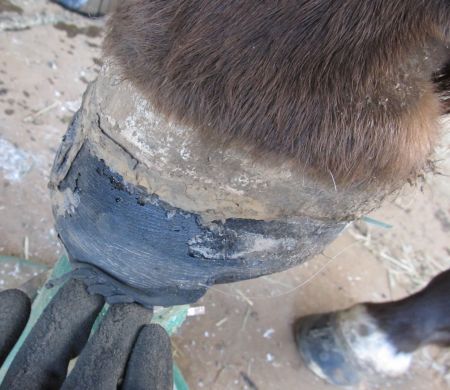 You can sort of see here how this GG bead works: this is Fergus’ foot post glue-on removal. The glue you see on the hoof-wall is all hard Adhere, while the glue that I’m pulling forwards with my gloved fingers is a rubbery skirt around the bottom edge of the hoof wall which prevented any Adhere from being pushed down into the sole as you put the boot on.
Once you’ve got your “anti-Adhere” bead in place, you can squeeze out a triangle of GG/Sikaflex into the bottom of the boot – basically mirror the shape of the frog. This will act to cushion the sole once it spreads out when you put the boot on.
And at this point, you’re ready for the actual gluing. It’s helpful (although not critical) to have an assistant to hold up the freshly cleaned foot, especially if you don’t have a spotless area as your gluing venue.
If the weather is warm, you might try keeping your materials in a cool place while you’re getting ready and prepping the feet. Some people resort to putting their Adhere in the refrigerator beforehand – certainly helpful to avoid the glue setting up quicker than you can get the boot on the foot. One tip Kevin Myers recently gave me is to make sure you don’t leave the glue-on shells sitting in the sun, as warm boots will accelerate the glue setting up as much as warm glue will.
Using a new tip and a new pair of disposable hand-gloves for every boot, work your way around the shell, smearing the Adhere onto the inside wall with the tip. Do not get any in the sole (= hard blob under the foot).
Once you’ve applied glue all the way around the inside wall of the shell, push it onto the foot, and if your fit is tight give it a couple of seating-whacks with the mallet before putting the foot down. Pick up the opposite foot for a minute or so, to allow the glue to set up without the horse twisting out of the boot or wandering off.
Et voila – le boot est glued. 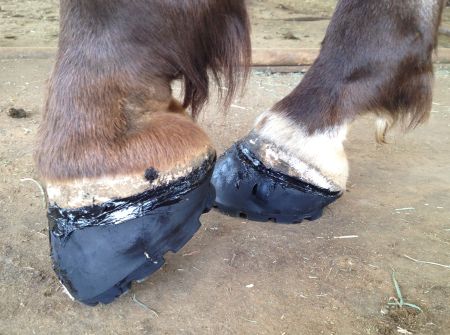 Fergus stylin’ in his back Glue-Ons.
I use any extra GG that comes out the back of the boot to seal around the top edge. However, this has the downside of staying tacky for a longer time than if you use Adhere to do this, potentially resulting in a coating of hay and bits of fluff (or the horse accidentally brushing one foot against the opposite leg, anointing himself with black goo). 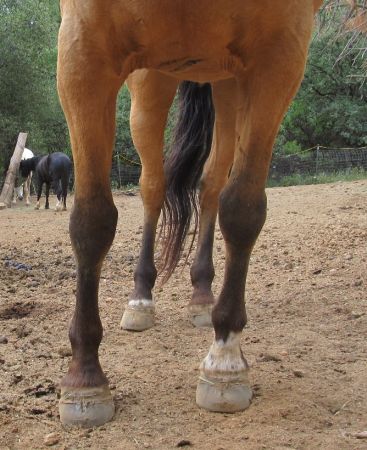 The morning after I glued Fergus’ boots on, I woke up to the sound of thundering hooves. Poking my head out, I could see a big cloud of dust with a small black shape hurtling past, followed by a large golden shape hurtling after it – Fergus and Small Thing doing laps of the paddock. It was a good work-out to make sure the glue-ons were going to stay on for the endurance ride.
And stay on they did.
Very proud of my, uh, Patrick’s boy, completing his first 75 in such good shape. We finished with a ride time of slightly less than 15 and half hours in our customary third-from-last position – and Fergus didn’t really look like he’d done anything, which was my goal.
Looking back, I can see some holes in his training (uphill trotting to keep up with those Nevada horses; learning how to eat your own food at vet checks and not stand around gawping/coveting the food of others), but overall he did spectacularly well. Phase 2 of NASTR Triple Crown accomplished – only Virginia City 100 left to go. 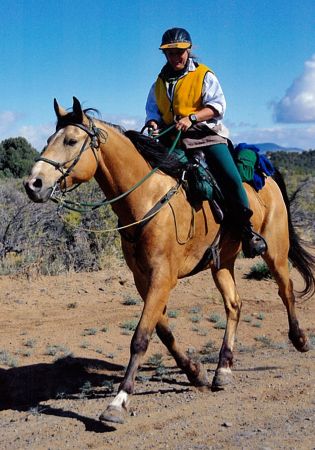 Fergus moseying along at about 25 miles into the ride, having done the worst rocks in El Dorado and Illinois Canyons. Photo: Rene Baylor.