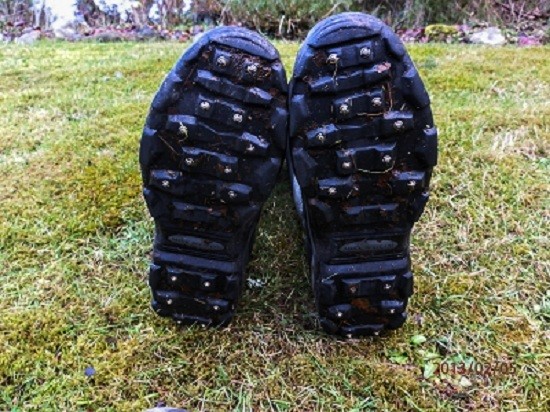 I wanted to share how we are using EasyCare Quick Studs. I love these little studs.

First we wanted to use them on a worn set of Easyboot Gloves to be able to get more miles out of the boots by increase traction with the studs. We called EasyCare and asked a few questions about the thickness of new boot tread. Then my husband was able to measure how much tread was still left on my old worn boots. We did not have much tread thickness to work with but we wanted to still give it a try. So my husband placed in the Quick Studs where there was the most tread left on each boot.  He increased the number of studs from the recommended four up to eight per boot to evenly spread the pressure points of the studs across the hoof and also to increase traction. I live at the northwest corner of Mount Rainier in Washington State, so traction, or lack of, is a concern to us for about seven or eight months of the year. He would have liked to apply ten studs per boot, but EasyCare sells them 16 studs per pack and we only had two packs on hand. 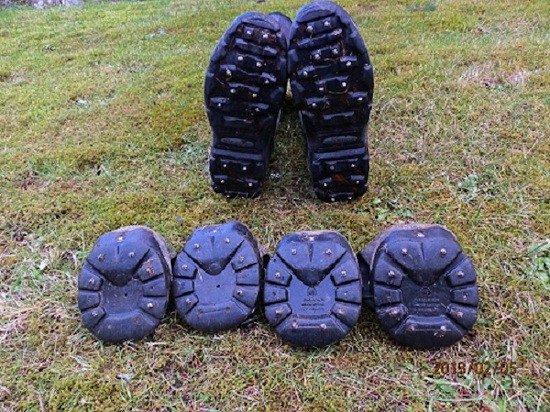 I have been very impressed with how well the Quick Studs have worked. And I have also been able to use a old set of Gloves in a whole new way.

I recently noticed that the toe studs had started to push through the bottom of the boot of the hind boots. I was able to remove those two studs in each hind boot and now the studded Gloves are good to hit the trails again.

My husband is an ex logger and back when he worked in the woods, he was always replacing the corks in his cork boots. So when we were happy with our experiment with EasyCare’s Quick Studs in my horse’s Gloves, we decided to give them a try in a pair of his rubber boots. 16 studs later and he was a happy man. We were out hiking today and he was  wearing his studded muck boots and he was sharing how the studs are giving him the right amount of traction/ friction but still will let his foot slide some so he won’t torque his knees. His story follows.

I need to order some Quick Studs to put on my own boots  since I am feeling a little left out at the moment. 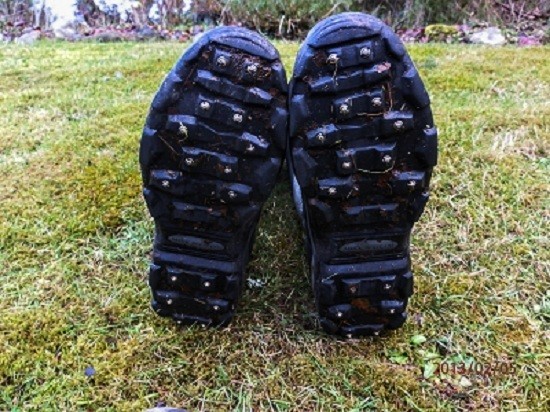 The short carbide tips on a soft sole boot (mucks and some hikers) or running shoes give a fair amount of traction on rock and bare wood (slick barkless trees going over creeks), but nothing comparable to heavy soled cork boots for tree bark and steep loose forest footing. They work good in pack boots or neoprene boots or waders. I like them for snow and ice primarily as arctic style Muck boots are easy to get on and off and there is no need to use lace ups or tie ice cleats to your boots. These are pretty durable for humans but are no good for the weight and scuffing that horses do in my opinion unless it was for ice and slick wooden bridges.

What do you use your Quick Studs for?