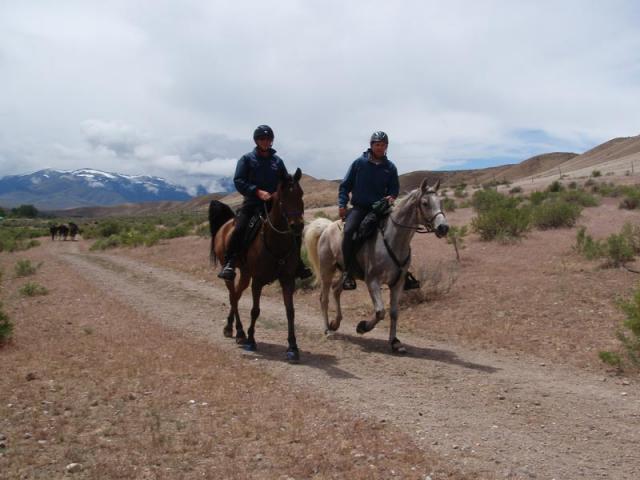 Garrett and Gene finishing their ride. Can you spy the blue test Gloves on Cyclone? They were really sharp!

Has it been only a week? Just a week ago I was hobbling around the house, all grumpy and sore after an awesome weekend with awesome friends and awesome horses. Too bad the weather was NOT awesome. The weather just plain sucked. This year, one of my favorite rides, Owyhee Fandango, was extra special because of some long-distance but very good friends who were able to come join in on the fun. EasyCare‘s own Garrett Ford and Kevin Myers, as well as Team Easyboot members Rusty Toth, Leslie Spitzer, Gene Limlaw (from Vermont!) and Tami Rougeau all made the trek to enjoy the sure-to-be lovely Idaho spring weather, beautiful trails and fun times we usually have at the three-day Owyhee ride. Little did everyone know, the joke was on us.

I should have known the weekend would be somewhat tumultuous when I pulled into ride camp under a beautiful sunny sky, opened the truck door to exuberantly greet my friends and promptly slammed the door shut as the sky opened up and drove everyone into hiding for about 20 minutes while Mother Nature finished her little temper tantrum. “Oh,” I joked, “that’s about as bad as things get out here- and it’s not as bad as it could be!” Still laughing nervously, I said optimistically, “I’m sure the weekend will be awesome, these storms come and go as quick as you can snap your fingers.” It turned out to be pretty nice for the rest of the day and we enjoyed an AWESOME trimming, booting, gluing clinic put on by Rusty Toth and Kevin Myers.

Rusty did an amazing job of explaining the mechanics of the foot and the importance of a proper trim. My favorite bit of information from Rusty was regarding the importance of a tight trim schedule, explaining that if you start at week one, and don’t trim again until week eight, you have to take at least nine weeks of growth off, to get ahead of where you were at week one. He explains that it makes so much more sense to trim at three or four week intervals, as you are actually able to get ahead that way. I also liked his explanation of not only backing up the toe to improve foot mechanics, but backing up the toe pillars as well. If you only work on the toe, the foot can’t actually morph into the tight, concave little number we get to see when addressing the toe pillars. The guys proceeded to glue on Easyboot Glue-Ons to Leslie Spitzer’s bad-ass horse, JAC Eagle Cap, who was to do the 100 that weekend. Eagle is notorious for being hell on boots and Garrett Ford made the observation that his back feet weren’t shaped ideally for boots, which most likely contributed to his “issues.” Eagle is special. I’m happy to say Eagles boots didn’t BUDGE the whole weekend and they completed the 100 in 5th place! More on that later.

Throughout the afternoon, I hemmed and hawed about riding the next day. It was to be Breve’s first ride. I knew the trail to be rocky, and I just had a general feeling of unease. I enlisted Mr. Easyboot himself to create a Sikaflex pad in Breve’s boots by squeezing the Sikaflex onto Breve’s foot, spreading it around and putting on his boot. This would offer him more protection against the rocks and more holding power against the wet. That night I went to bed still feeling “off” about the next day. Unfortunately (fortunately? I’m going to say fortunately because I did learn a long time ago to trust my gut instinct) I woke up the next morning to a downpour. I rolled over and told my husband to go tell my riding buddy there was no WAY I was riding in this weather! Completely atypical for an Owyhee spring, the clouds hung low and heavy with rain. And there was no break visible. Huh-oh. No way. While I’ll agree that nobody likes a sissy, most people don’t like being soggy for 50 miles either. Merri and I agreed to forego the day and planned on riding the next day when it was sure to be nice out. Can everyone see where this is going? So of course Friday ended up being a lovely day, blah blah blah. Garrett Ford on The Fury and Gene Limlaw on GE Cyclone (rocking BLUE Gloves!!!) won the ride in fine form. It was extra cool because Garrett had the new prototype EasyShoe on The Fury and they are SWEET!! While the EasyShoe might not be for everyone, I see it as an excellent option and am excited to try them myself.

Kevin, Rusty, Leslie and I headed to the outcheck to crew for our friends and help wherever needed. It is amazing how many people here are using boots these days, for so long they were so resisted. I felt a little bad as the conditions were such (wet, slimy, mucky) that can test even the most experienced booters’ resolve, but it seemed like people were mostly doing just fine with things. Because we aren’t used to a whole lot of wet here in the desert, you tend to forget that some extra precautions can prevent any errant boot losses, and for future wet rides, I will definitely be using Sikaflex in the sole and my trusty athletic tape around the wall. Don’t forget the Power Straps!

Later that afternoon, after another impressive downpour, Merri and I took our boys, Breve and Jose, out for a pre-ride spin in the sunshine. We’ll laugh about our decision not to ride in the rain that day for a long time to come… 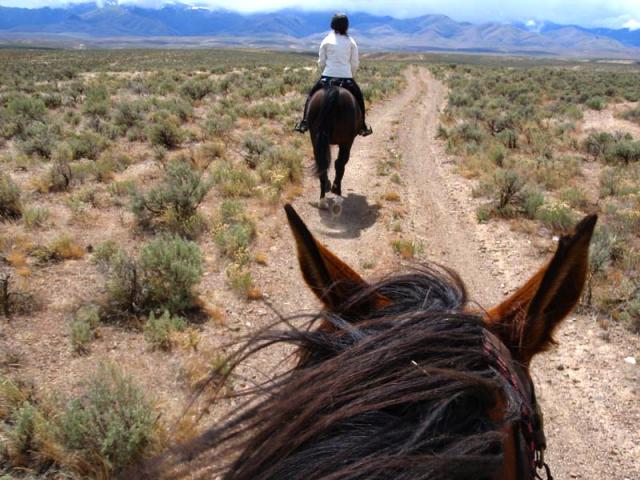