Still reeling a bit from the week-long trip we had at the 9th/10th (who’s counting, anyway) annual Owyhee Canyonlands Five Day Endurance Ride. This ride marks the nearing of the end of the season, and has always been my favorite ride. I began my endurance experience six years ago at this ride after a few stray LD’s here and there. Since, I have logged over 1,800 miles in the Owyhee desert. I never, ever tire of it. The rocks, the sand, the wind, the snow, the hot sun, the placid river, along with sheer rock canyons, never-ending washes and the mountains in the distance all make for my favorite place to ride. Although there are certain trails that I curse (damn that little yellow house!) it is truly God’s country that we hope is truly never discovered. 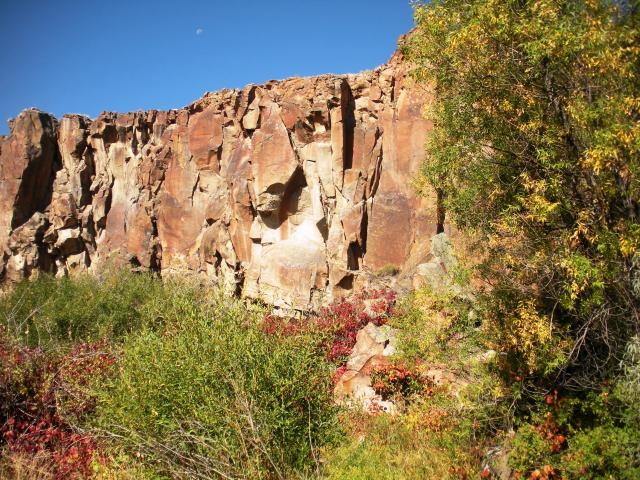 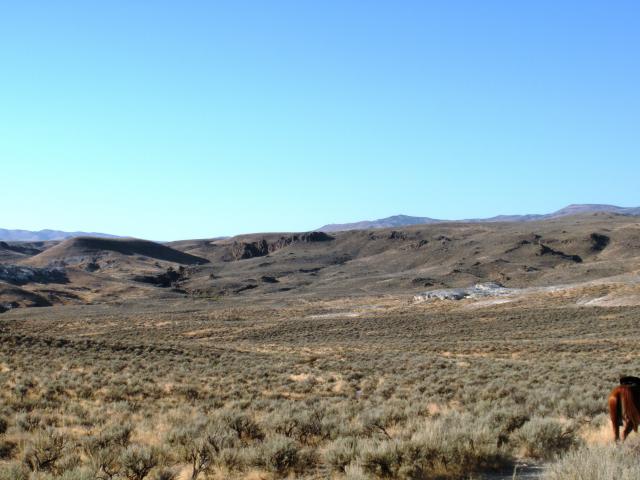 My ride started a couple weeks ago when Steph Teeter asked if I would be able to help glue on boots for their horses who would hopefully be going all week. Usually this job goes to The Bootmeister, but due to other and more important obligations (I mean, who can’t do an FEI 100, a 5-day and Tevis in three weeks?? Slacker!!) I was the best choice. This was a scary thought for me and I am sure Steph but, I was all they got!

Hoping to brush up on my gluing skills since I have only glued on once previous this year, I started with my own mare the day before we were to leave. Being adventurous like I am, I thought to myself, self, why not pick the most inopportune time to glue boots on your flighty, fidgety mare. Done deal. Although the weatherman predicated a nasty storm to blow in “after 6 o’clock PM” I had the psychic-vision that it would hit at 2PM. Naturally, I started at 1:45PM. I use a little bit different of a gluing method than most, but it works for us. I start by putting Goober Glue in the frog shape on the sole of the boot. I then spread a thick bead of glue around the boot, where the wall and sole meet. You can do all four at once or two at once, which I prefer. Then, right before putting the boot on the foot, I spread Adhere around the top of the boot to hold it on tight while the Goober Glue sets. Usually it’s a pretty quick process.

This time I added too much Goober Glue to the first boot, and as result got caught up in a slick, twisted mess. You see if the GG and Adhere mix, the Adhere can’t cure and the foot essentially turns into a greased pig. Add approximately 300 MPH wind and a freaky horse and you’ve got yourself a recipe for disaster <insert swear word of choice here>. Luckily the next three boots attached without a hitch, and I decided to turn her out in the tornado with three booted feet, and one naked. Sometimes it’s just not worth it. Thankfully, I was able to slap that sucker on in just a few minutes prior to leaving the next morning. Ironically, that was the most difficult boot to remove tonight, a week and a half after putting it on.

We arrived at The Teeter Ranch and I found five horses tied up and waiting for me. Steph had done a really great job trimming and prepping the feet, and made everyone who was new to gluing watch EasyCare’s super great and educational gluing tutorials. We quickly got to work and no sooner found out we were short Goober Glue. Oops. Not only were we short, but the tubes Steph had were old and the consistency completely different than any I’ve seen before. Coupled with the fact I decided to get sick the day before, this was an interesting gluing experience. 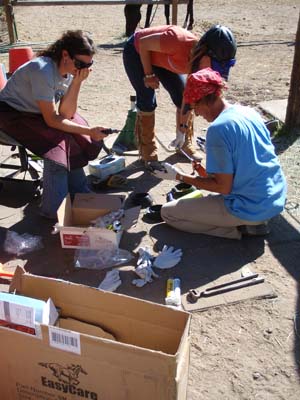 At some points, all I could do was laugh! 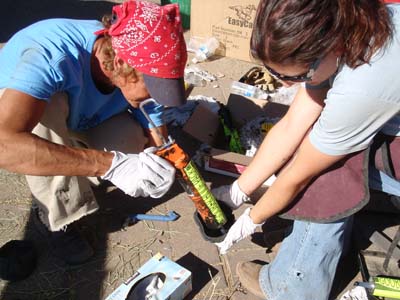 Towards the end, we had our gluing groove on. I have to say, the Premium Vettec Glue Gun is worth *every* penny and is on the top of my Christmas list. What a rude awakening to find out I’ve been making it so hard on myself for so long! Are you kidding me?!?! Nope, it is smooth like butta and no hand cramps. I also was able to do several boots with one tip, instead of using one tip for each boot and a separate tip to seal the tops. Worth the money right there. Steph and I decided that we got pretty good and might have to challenge Mr. Easyboot himself to a boot gluing race. You get the old gun, Mr. G! 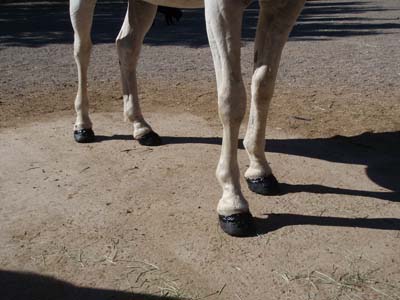 A picture-perfect job on Mac. Thanks for the pics, Merri!

We started the ride with six horses, and twenty-four boots. Unfortunately a couple of the later-glued-on horses lost a rear boot throughout the five days, but it ended up being no big deal because all horses have been going in Gloves and spares were carried, just in case. Steph rode her spry cover-boy, Jaziret Bey Musc, all five days. This guy is 20! His first ride was a five day ride in 1998, and we know this wasn’t his last. I should note all Mr. Rhett’s boots stayed put 🙂 John Teeter rode Rushcreek Mac to a strong 200 miles in four days. Merri, on the famous JOSE!, and Connie on Phinneas rode all five days. Four of the five five-day horses were all in Gloves of Glue-Ons! Team Easyboot Member Karen Bumgarner rode home-bred Z Summer Thunder all five days in Easyboot Gloves! Go Karen! 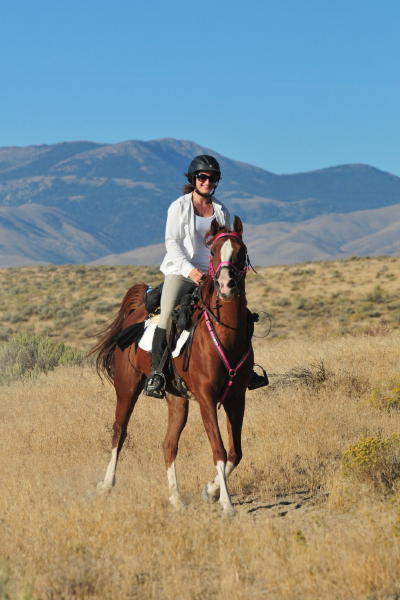 Replika and me, cruising the flats on day 1. Steve Bradley Photography

As for us, well Replika only made two days before the nasty scratches got her. We did the first day, took a sick day the next, and had a super fun ride the third day. Unfortunately, I figured our fun was over the next day as I slathered cream on her sore pasterns. No fear, BATMAN to the rescue!!! Steph was gracious enough to offer up her wicked cool Batman horse for the remainder of the week. This was extra special to me as my best friend owned and started this guy, but sadly had to part with him because he’s just a teeny, tiny, wee bit wide and hurt her already screwed up knees. I slapped some Gloves with athletic tape on the fronts, and plain old Gloves on the back and never thought about them again for the next two days. There is something heavenly to be said for figuring it all out!

Batty and me flying through Sinker Creek. This trail could have been a disaster for ill-fitting boots. Four miles through the water and then a steep climb out of the canyon. A good fit is a must! Another Steve Bradley great.

I have seen more and more booted horses at our local endurance rides this year than I really ever thought I would. I would say we’re half and half at this point. I would think in a couple more years, we’ll be closer to 75% or even more. I have watched my friends struggle, hit rough patches, and work on through. Most everyone I know is “over the hump” and enjoying booted bliss. Unfortunately I did see some boot failure last week, which is disheartening when you’re in it. I plan to make some phone calls in the near future to see if I can offer any help.

I think a lot of people make the transition to boots to save money, which it can, but that shouldn’t be the primary reason. I hope I can help these people understand success lies with fit, and fit can’t be achieved without proper trimming.

All in all, it was another successful and memorable five-day. I am already looking forward to the last ride of the season, and ready to break out my famous tutu. I hope to get another ride in on Replika, hopefully this time in our beloved Gloves.