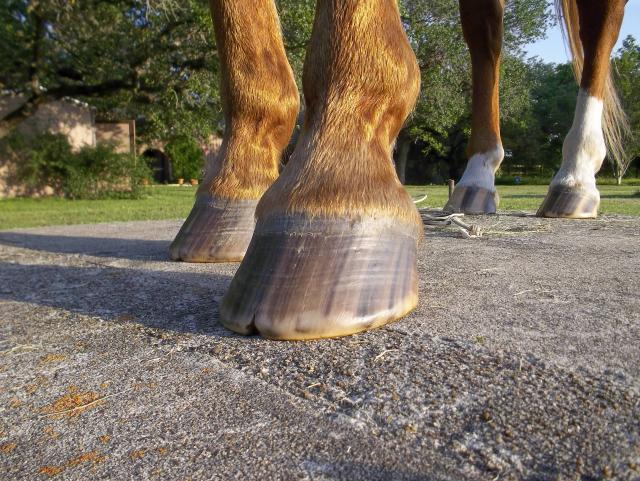 The new hoof growth. This picture was taken four days before I met Trista in Waco for the trim. The hoof cracks are smaller.

I rasped Newt’s hooves for the first two weeks after his first trim as planned. I don’t know if I really did much, but his cracks did not get worse. We had a big ride the third weekend so I did not want to rasp that weekend. By the time I was able to get to him, it was ten days after our last rasping. I knew we had an upcoming ride about two hours from Trista’s normal trimming territory the following weekend.

I called Trista to see if she could trim Newt while we were at the Valley Mills Texas Trail Challenge. Turns out Trista had to give a demonstration at Texas A&M College of Veterinary Medicine Open House and could not meet us there. Since we were both planning to travel through Waco, Texas on that Friday, we decided to meet up in Waco. We met in the parking lot of Office Depot at the corner of I-35 and Hwy 6. Now if any of you know the area, that is a high traffic interchange. We decided to meet there since it was easy to get our loaded horse trailers in and out of there and plenty of places to eat lunch.

We got Newt’s feet trimmed with only a few stares from people.  Not sure if people were used to seeing horses in general or if we were not as “out of the ordinary” as we thought. Trista said Newt was only one of a few horses she would ever attempt to trim with so much activity around – he is such a good horse.  Trista said he was getting a little sole concavity already. She really worked on getting his toes back to the water line to help get rid of the toe crack. I had not been rasping off as much as I thought. Trista showed me again how to rasp at a 45 degree angle and how far to go back.  We could see about 1/2 inch of new growth from the coronet band and could tell his hoof angle was already beginning to change some. 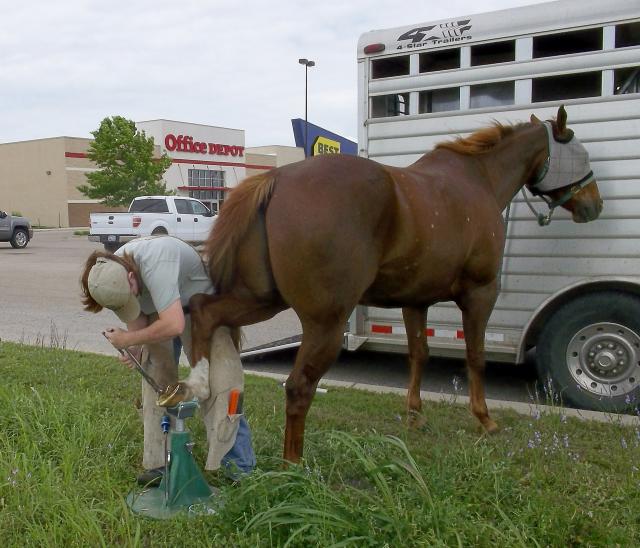 Trista Lutz trimming Newt in the Office Depot parking lot in Waco, Texas. I normally hold the horse, but just could not pass up the photo op.

Newt was a little sensitive over the rocks during the ride, even with his boots on. I have ordered pads to see if that helps until his his soles have a chance to toughen up.  I have been rasping once a week since then, and he seems to be doing well. I am gaining more confidence in how I am rasping. Newt is gaining more confidence and patience with me as well. It is now taking me about half of the time to rasp as when I first started. He is not as sensitive on hard, uneven ground so hopefully he is adjusting well.

We are going to try our first NATRC ride and ride in the novice division. We have been training pretty hard for the last six weeks: lots of trotting and trying to figure out our pace.  I’m sure glad we have our Easyboot Gloves.