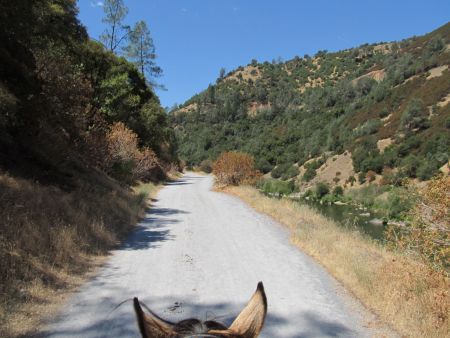 Fergus on the River Road after the last vet check, Lower Quarry – this is the easiest mile of the whole trail – just as well, since by the time you get here, you’re completely stupid.

So Fergus and I find ourselves unexpectedly on our way to Tevis (4th August) and right now I’m wavering back and forth between “normality” and the usual “Tevis paranoia”. Predictably, I don’t feel he’s as fit as I’d like – and I don’t feel close to as fit as I’d like, but we’ll do our best and provided the temperatures don’t get too ridiculous, we stand a good chance of finishing. He’s strong and I’m the smart one, right?

Right <snort>.
We’re lucky enough to live close to the bottom half of the Western States Trail (WST) so have plenty of opportunity to pre-ride the trail. Two Sundays before the ride we did our last “proper” pre-Tevis training excursion. We hand-walked the 1000′ down from Driver’s Flat to get to the WST at Fransciso’s (the 85 mile vet check) before back-tracking along the trail towards the Finish. Fergus wore his Gloves (he’s due to have his Glue-Ons attached the Wednesday before the ride) and I wore my planned Tevis attire (which has now been carefully reassessed after various rubs and discomforts were identified during our 18 mile trip).
One of the main reasons for this route choice was to make sure that Fergus understood the “Crossing the River” concept. He’s been wading down there before (much happy splashing and wallowing from him) but we’d never actually crossed to the other bank. They arrange for the flows from an upstream dam to be reduced on ride day, but it doesn’t always work as planned and the water can sometimes get deep. I wanted to be sure that he’d have the urge to keep going forwards if he got worried, rather than turn back the way he’d come. 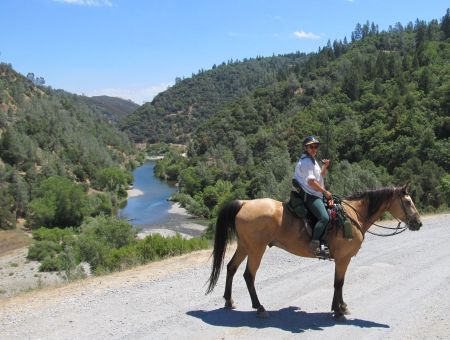 Pouting over my poorly finger shortly before crossing hw-49 – looking back towards Lower Quarry
The river crossing turned out to be a non-event on Sunday, barely belly-deep, but on the way there, trotting cheerfully along, Fergus took it upon himself to stop dead for absolutely no reason. Because he has such big movement the best way to ride it is to stay way looser than my normal stance on my smaller [spookier] horses and the end result was me narrowly missing somersaulting over his head. Once scrabbled back into the saddle, I looked down at my little finger and realised it was bent at an odd angle. Uh-oh. Pulled it back into shape but over the next mile every time I bent it slightly it would pop back into oddly-bent-mode. It began to hurt more so I taped it to its neighbour with some electrical tape from my pommel bag (boy scout, me) – without even really slowing down, I might add. Good 100-mile skill to master. 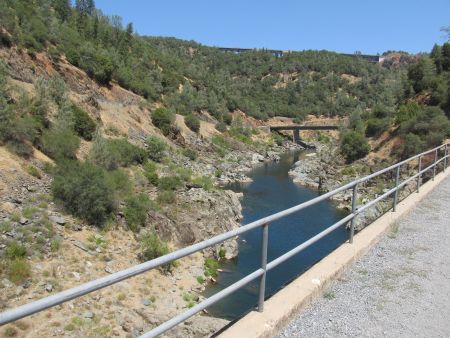 Looking backwards and forwards on No Hands Bridge – this was the last place we were vaguely comfortable, temperature-wise for the next five miles 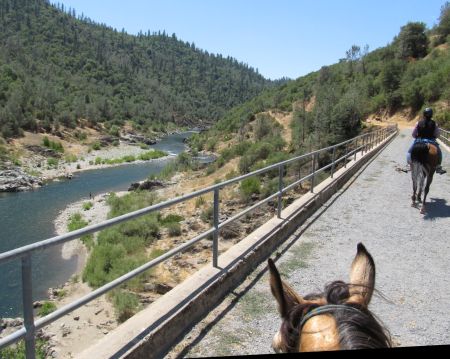 Towards the end of the ride, with the temperatures hovering around 100°F, Fergus and I began to get more and more pathetic and wilty. I’d spent the day before in the barn in 110°F rasping three horses that were overdue and not likely to get much attention over the next three weeks, and I was definitely paying for it. We made use of the sponge-onna-string in the creeks, but the heat was really getting to both of us. Remember the comment about me being the smart one? Not. Luckily riding buddy Erin was able to mop us with her sponge and get a reluctant Fergus to drink out of her smooshable bucket that she filled from a trickle coming out of the bank.
The final insult to his hot-self was convincing Fergus—who knows the trail pretty well—that we had to make the nearly mile detour away from the “old finish” to come back around from the opposite direction via the “new finish”. Was this some kind of warped joke?
All’s well that ends well. At the finish we hosed the horses back to a manageable cool state and a large bottle of gatorade restored a modicum of intelligence to my overheated brain and I was able to drive us all home again, nursing the poorly finger and hoping it will be in reasonable shape in two weeks.
Here’s hoping for a fun trip on the WST. With Fergus to look after me, we should have a good day. And thanks, Patrick, for loaning him out – I promise to give him back at the end. Honest.
—
Lucy Chaplin Trumbull
Sierra Foothills, California