Where to start? First, I was not sure I would go to Old Dominion since my mare got pulled at the end of her first 50 at Biltmore. Her recoveries were really good, she never felt lame on trail but was off at the final exam and had a sore foot. She was sound two days later and acted normal during our training rides in Gloves. 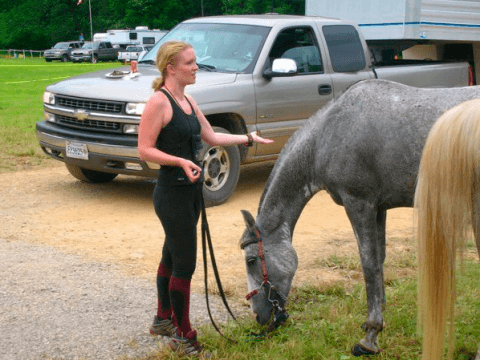 I had the opportunity to get a ride to OD and when I heard my good friend Kevin Myers was going to be there, then my mind was set: Twist and I were going! But what distance, 25 or 55? I knew the course from last year and heard it was even harder this year, so I hesitated to enter the 55, but at the same time it was my only way to see if Twist was sound. I knew she could breeze through the 25 without a problem. If she had an issue, it would probably not have shown up in 25 miles.

So I decided to go for the 55 and RO if it was too hard on the pocket pony. She felt really good when I rode her the day before the ride. Kevin glued the boots on (it was tough on him with the humidity, thank you for all your hard work my friend) and we were set to go! The morning of the ride was quiet until I got on her. She is a little fireball and I have to use a Pelham with two reins at the start otherwise it’s an endless fight. I prefer having a strong bit to use if needed. If she is gentle, I use the mild part of the bit. If she pulls I can be more reactive and I found it to work much better than fighting and me getting tired and yanking on her mouth.

So off we went, a little bit sideways at the back of the pack. At the base of the first climb Twist was still fired up and wanted to trot. I knew what was ahead of us, so I forced her to walk. Twist quickly gave in and started panting so I got off to help her. She was pooped at the end of the first climb and I let her recover by walking for a long time. We then started to trot slowly, but when we caught up to some horses Miss Twist got a second wind and was eager to go, so we kept trotting.

She pulsed down easily at the first vet check: she always eats and drinks everything in sight, even on trail. So off we went for the second loop, the loop of hell, with a 2.5 mile climb covered with big rocks. It was around noon so the heat was unbearable. Twist was leading a group of horses while I was walking (panting myself) in front of her. I saw she was getting tired so I let the horses pass us and stop for a couple of minutes in the shade (sort of). We kept on going and then it was the going down: I walked all of this.

When we arrived on flat ground Twist agreed to trot but she was dragging her feet so I let her graze and drink (and sponged her) at every opportunity we had. Once again when we caught up to some horses she perked up and it made me feel good. She pulsed down at the second VC in eight minutes. I know it seems long but it was hot and that is when most of the horses got pulled for failing to recover. Her CRI was 52/50, woo hoo!!! I knew the last two loops from last year. Twist was good so we kept a steady pace (nothing crazy around 5.8MPH).

We passed VC 3 with bright As all around, so I was happy and Twist was still eating and drinking. I left a couple of minutes late so she could eat more. The last six miles are not hard and the heat was slowly decreasing so we averaged a speed of 6.5MPH. I caught up to some good friends half a mile from the finish and we decided to tie. Once we passed the finish line they told us we were top 10. I could not believe it, I was sure I was closer to 20th place and would have been happy with it.

I waited to get our completion from the vets before getting too happy. When Nick congratulated me, I jumped on Twist. I was SO happy, her second 50 and top 10 at a tough Old Dominion. What a power pocket pony I have.

I decided to stand for BC, just to give Twist the experience and to get the chance to see how she recovered. I weight 145 lbs with all my tack and arrived an hour and a half after the winners, so I knew there was no way I would get BC, and probably not high vet score since Twist is still a green endurance horse.

A little Twist history: I bought her online (I know her sire has tons of get excelling in endurance), I could not go to see her as I was flying to France for the holidays. I found a vet, had her go through a pre-purchase exam and decided to get her as she was sound and healthy. As you can tell, she was. She arrived at my barn on January 9th, did 2LDs (one she got pulled at the end because of my stupidity). Foxcatcher 25 was OK but she was still a nutcase at the start, even starting 15 minutes after the pack. She still has a lot to learn, but she is quick learner!

Long story short, when they called my name for high vet score at the awards meeting the next morning, I was amazed. But when they told me “Hold on stay here, Twist also got BC”, well then I cried. I got Twist because I lost my first horse last year and I couldn’t get myself to think of not riding anymore. I’m a foreigner and the endurance community feels so much like a family to me, I had to get a new project to work on to keep riding the trails with my endurance peeps, and Twist crossed my path!

What an amazing little mare she is (14.1), she also has humor, she is a goof and I LOVE her. And I know Mona Tika is giving her all her blessing from the heaven meadows. I miss her every single day but it makes my love for Twist even stronger! 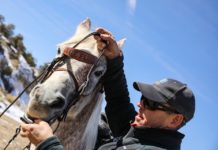