Wow, what a week it’s been since I last posted about heading Reno for the annual AERC convention. In short, I had a blast. I got to meet people I had only ever spoken to over the computer, got to spend time with friends I don’t see nearly enough and got the ride of a lifetime, literally.

Since I started using Easycare boots a couple years ago I have developed relationships with various people, all connected through a simple piece of material disguised as an Easyboot and obsessed with a common goal- successfully keeping our horses barefoot and/or booted throughout the toughest tests of our equipment, our trimming and our sanity. Otherwise known as endurance riding.

I don’t recall how I became friends with this man, but realized last year just how valuable our relationships can be, despite the fact we might have never actually met someone face to face. Chris Martin, owner of Monk, also known as Mr. Goober Glue, has been a very useful resource and valued friend for quite some time. When we made plans to come to Reno, Chris offered to take me on the Tevis trail, to get a feel for the last few miles, prior to our arrival. It was all dependent on the weather of course, which kept me in agony until 10AM that morning, at which time the chain controls were lifted and I was told to “get my butt into Auburn!!” 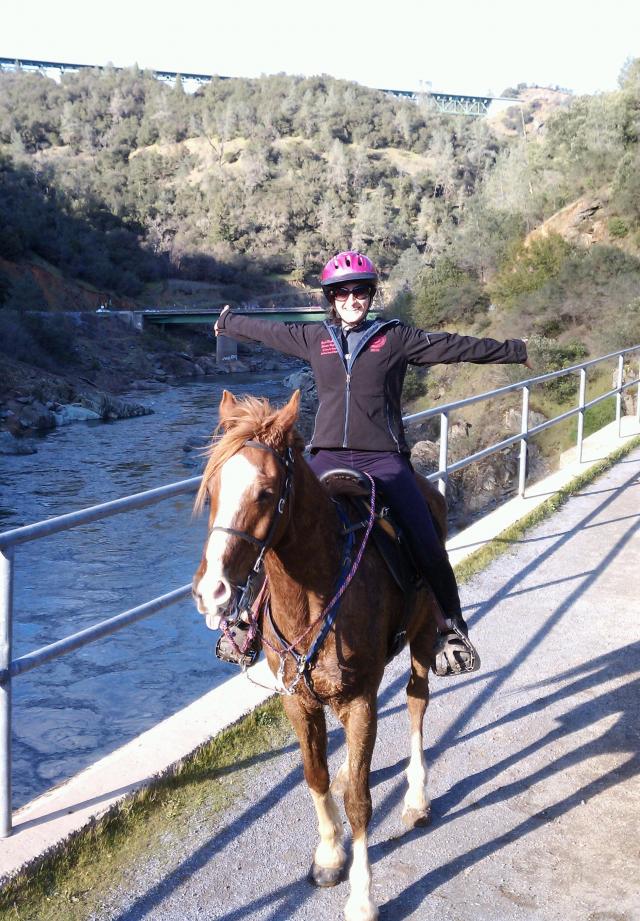 That’s me. Riding MONK!! On No-Hands-Bridge! Which is part of Tevis!! I have to giggle to myself because when Chris first told me we were approaching the bridge I was looking UP to the highway bridge and about peed my pants. After thinking we were crossing THAT the actual bridge was nothing scary at all. Silly me.

A Belgian friend was eager to get out of Reno for the day and off we left. The drive to Auburn was uneventful, if not for a few heart-stopping moments when “they” stopped us to ask us where we were coming from and where we were headed- I was sure we were going to get turned back to Reno, as we didn’t have chains, but breathed a humongous sigh of relief when we were told to have a safe trip and sent on our way. In just two short hours, I was standing in my riding tights facing Monk, who is a celebrity in his own right. 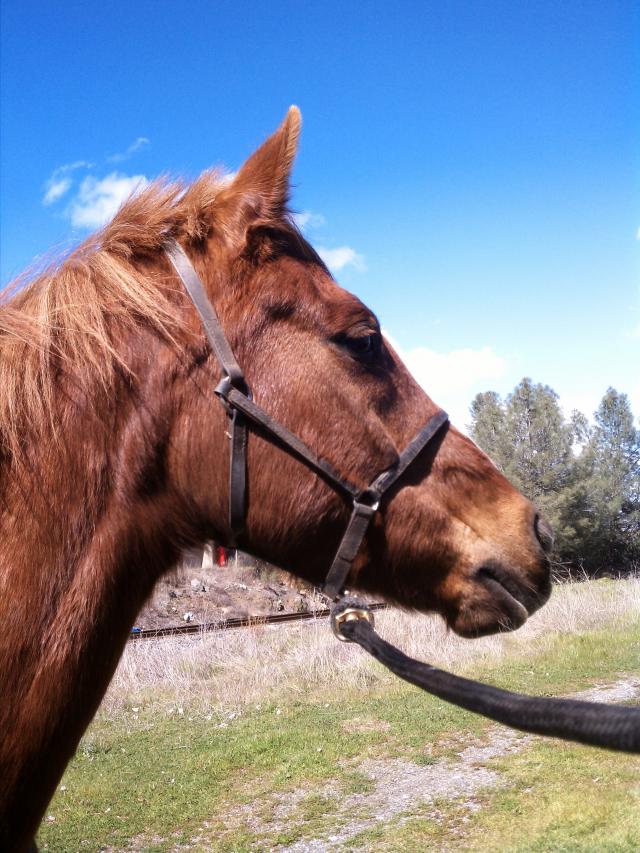 Chris and I mounted up and off we were, down the Tevis trail. I have to interject for one moment and say that the actual “finish” of the Western States Trail was pretty anti-climactic. Of course, logically, I knew the magic of the Tevis finish-line is result of the actual ride, but I was surprised to find the end of the trail just that- an end to the trail. I can only imagine (and hope to experience myself) the emotion that comes with crossing this finish at the end of 100 miles, in the middle of the night, under the full moon of July. 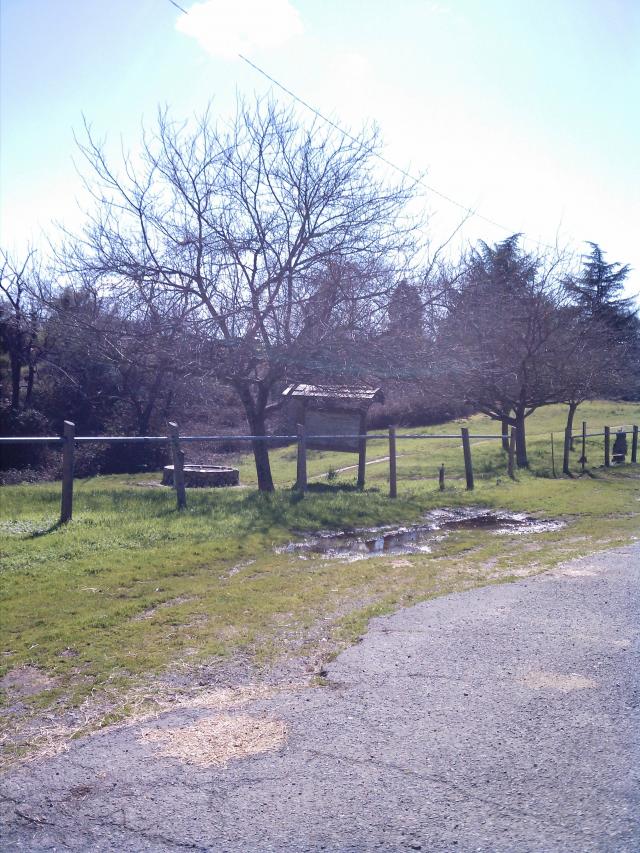 The Tevis finish at Auburn. 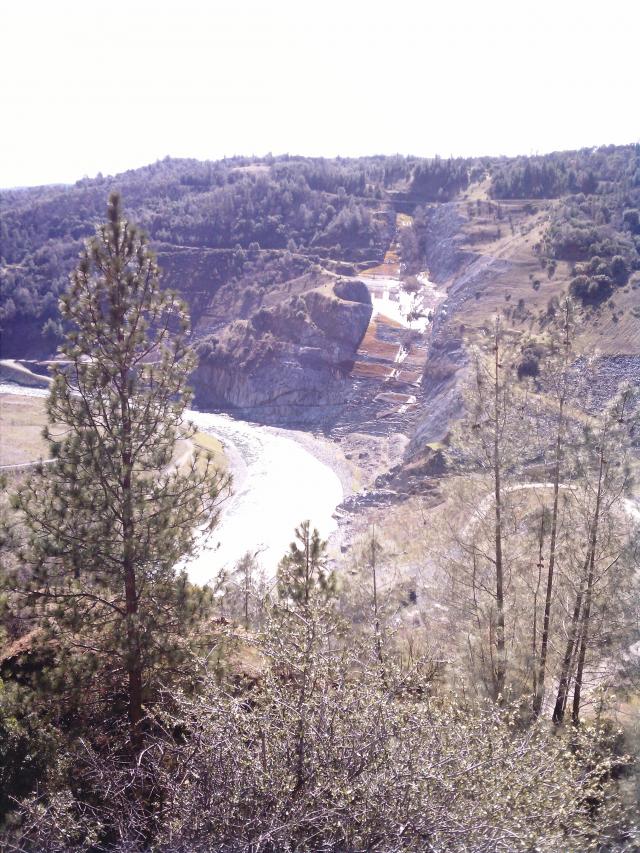 The view from the trail, about a mile in. American River below.

We set off down the trail on our horses, myself riding Monk, who had a full set of Glue-On’s applied just a week earlier as preparation for the 100 at 20 Mule Team, and Ambrose, the new horse of Mr. Martin’s, fresh off the track and only two months into his barefoot transition equipped with Easyboot Gloves on the front and Glue-On’s behind. Monk is wicked strong and took every opportunity to sneak past his brother while his rider was lolly-gagging behind, mouth-agape, eyes wide. I couldn’t get enough of the trail, the view and the possibilities of what might come. Although impractical and silly, I attempted to memorize every rock, every rise and  every fall of the trail. My hopes are to be there again in a few months, on the back of my little red rocket, in the pitch black of night. 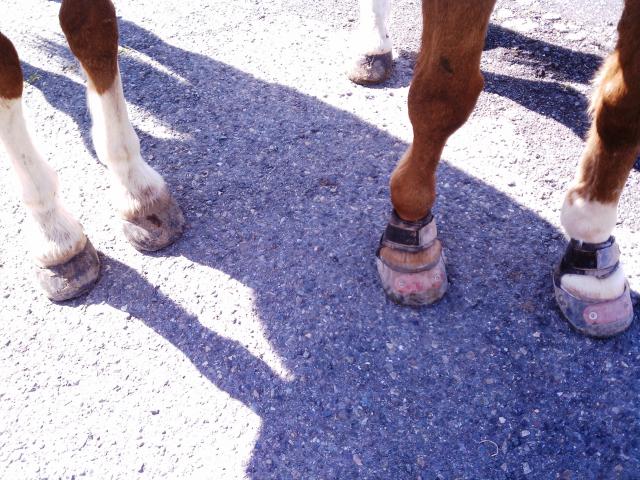 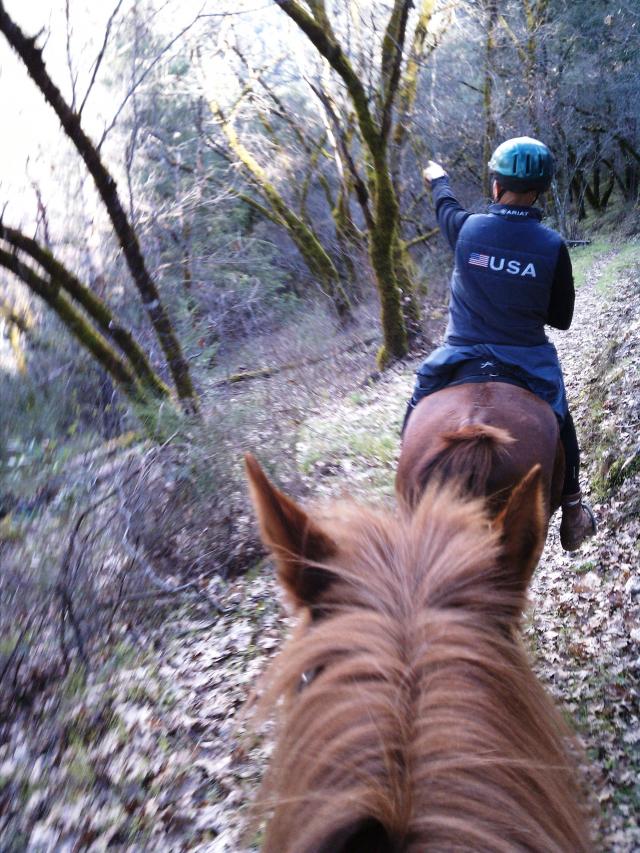 Chris being the most thoughtful tour guide. While he wasn’t racing my horse back to the trailer!!

We rode through the “black hole,” across No-Hands Bridge, past the Lower Quarry vet check and to the river and back, all-in-all, about 22 miles. A little over half-way, Ambrose lost a Glove. Chris has been experimenting with sizes on this new horse, who appears to be somewhat in-between sizes at this time. All of us can relate to this transition period where things just don’t go as smoothly as they might in a few months. I know Chris was frustrated losing his boots a couple times but unfortunately this is just part of the curve. I saw pictures of this gelding’s feet shortly after he moved in and they were pretty horrendous. They are coming around very quickly and I am confident that in no-time, the big gelding’s feet will be in tip-top shape and Chris won’t have these issues any longer. It happens to the best of us and every experience isn’t without a lesson. 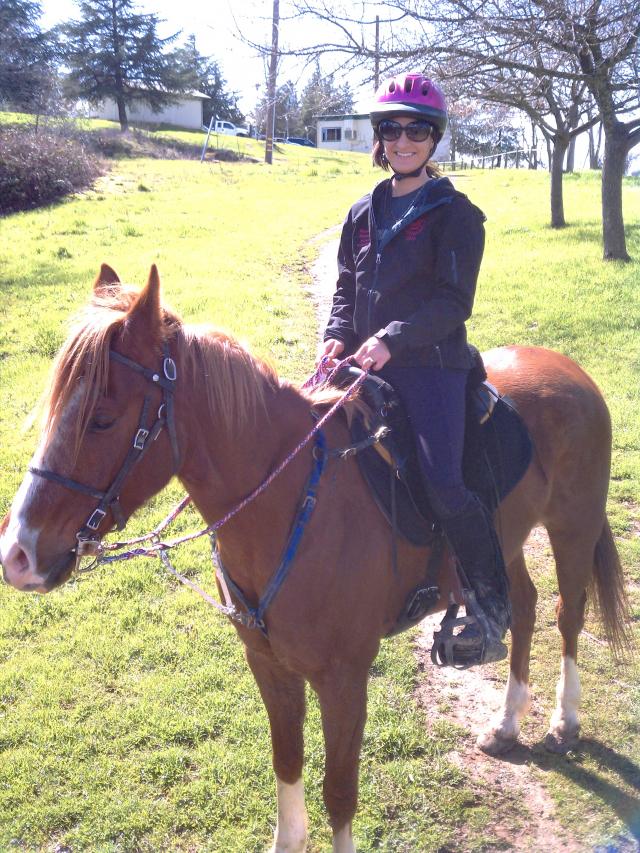 Eventually Chris took the Gloves off of Ambrose and we rode the last few miles of the trail back to the trailer barefoot. These two horses were beyond cool and I can’t wait to see how Ambrose moves up in life- what a guy! Monk is just Monk, and he is sure to do great things. After untacking and taking one last glance of the finish, we were off to enjoy a big ‘ole juicy In-N-Out Burger. Oh yes. It’s good. Wish we had one in Idaho, but it’s probably for the best (of my behind) that we don’t! 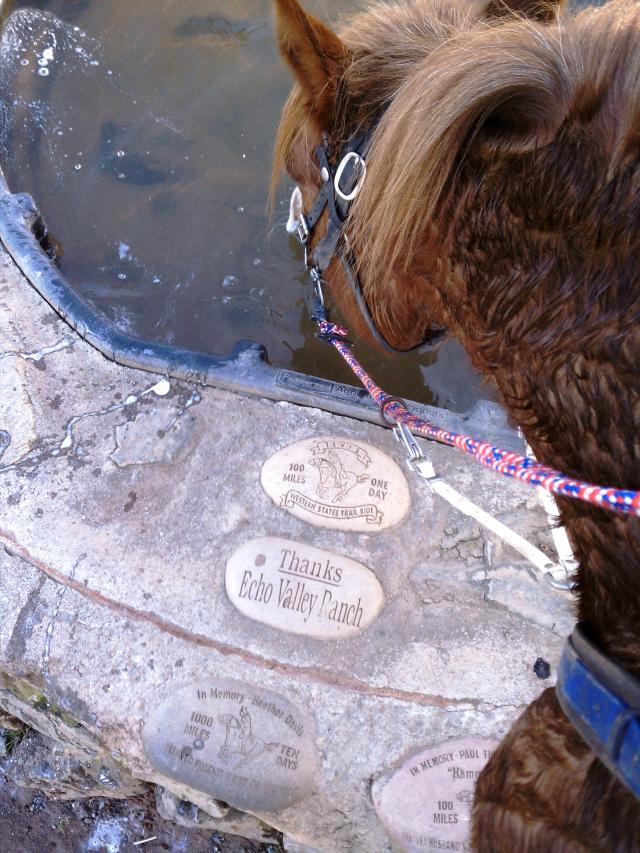 Monk drinking after our 22-mile ride. This horse is all business, all the time.

I was exhausted when we got back to the Grand Sierra and fell asleep hard. I was so excited to see my friends the next morning!! I was a little nervous headed down the Easycare booth in the tradeshow the next day because I always get a little nervous meeting large groups of new people. Of course that feeling was quick to disappear the second I saw Kevin Myers and Garrett Ford, among other friends. I watched Kevin and Garrett in awe as they easily conversed with fellow riders and guests. What a great group of people these boot-users are! I was able to meet many people who use boots, are thinking of using boots and are somewhat resistant to using boots. I suspect within  the next couple of years that last group will be vastly diminished. 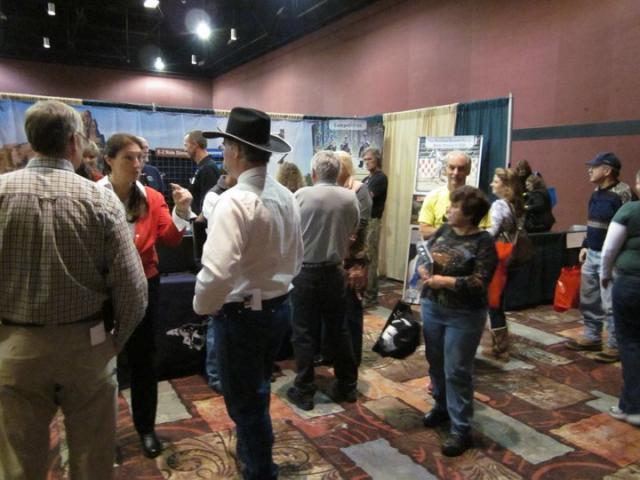 The Easycare booth was packed almost 100% of the time. What great peeps. 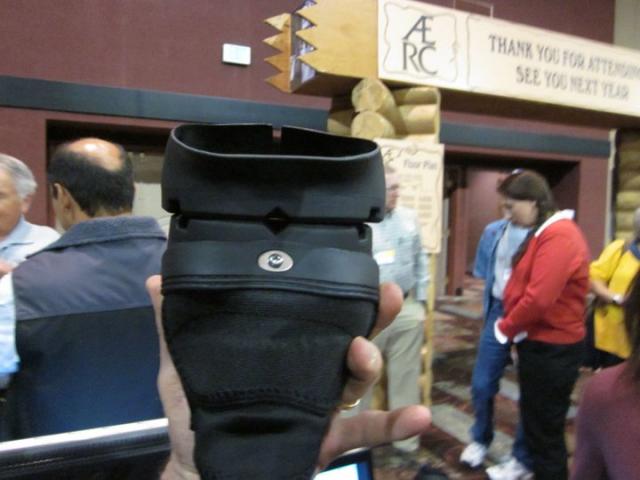 We were given a super-cool, hands-on sneak peak of the new wide Gloves. This is comparing a size one Glove with a size one WIDE shell. These will be just the ticket for a lot of horses! Coming mid-summer!

One of the funnest people I met was our dear Lucy Chaplin-Trumbull of Keeping It Real. I am completely guilty of creating a picture in my mind of people prior to actually meeting them, and I was totally taken aback by meeting Lucy in person. Now I am convinced that to get the absolute most from her writing, you must read it in your best Mary Poppins voice. Yes, she is that cute and British. Unfortunately she does not carry a parasol, but I could see her carrying a bottomless carpet bag if you bribed her… Um, so long as it wasn’t pink (which apparently she very much dislikes). She might talk if it was bright yellow. 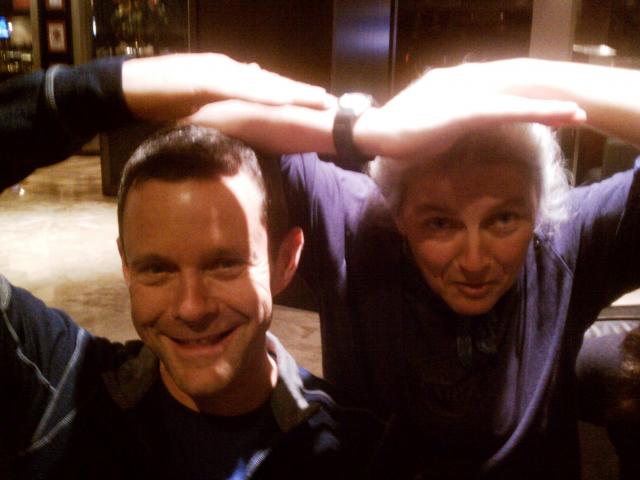 Lucy and Kevin being their adorable selves. Sometimes people are just good people. 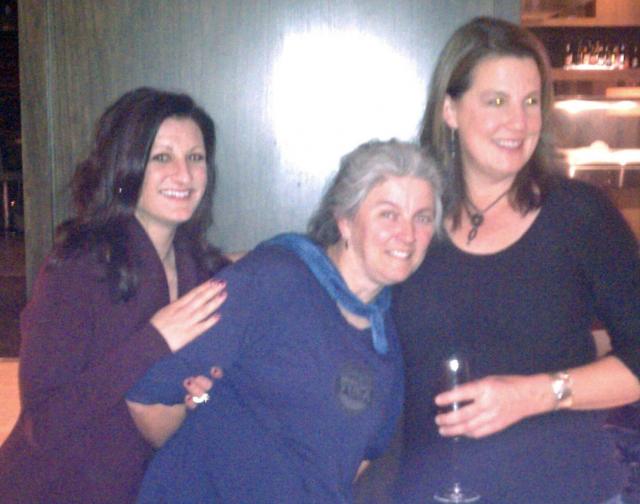 Lucy, Leslie Spitzer and myself. The lighting in this hotel was just plain old BAD!

It was a very special weekend that not only solidified my future goals but also developed deeper friendships. I am now off to go daydream about Tevis, reflect on my dreams, miss my friends and, of course, practice my accent. Our weather is supposed to drastically improve by the weekend and I am SO READY to RIDE!!!

And the Winner Is…