This past weekend I went to the NEATO Ride in Escoheag, Rhode Island. They offered a 30 and 50 mile ride with the Region 16 distance championship. Last year this ride was a two day ride in August. It was in the 90s with very high humidity. 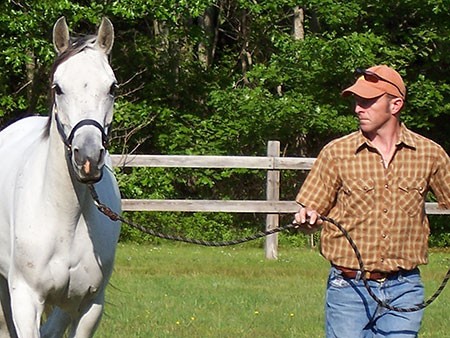 Little did I know that Rhode Island has a lot of rocks. But guess what: they do. The trails, though lacking in elevation, are very technical: lots of signal track ditches and washed out roadways. Earlier in the season they had 16 inches of rain in two days.

Base camp is a nice series of meadows surrounded by trees. There is plenty of room for rigs and paddocks and lots of nice grass. The NEATO club is a real nice group of people that are working hard to put on a nice ride.  They had a welcome barbecue the night before as well as one the night after the ride. 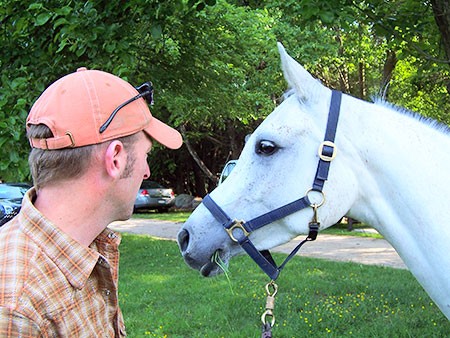 This year the trails were changed some from last year to make it a more friendly course to navigate. It wasn’t an easy ride but a lot less difficult than before. I took my Arab mare Grace and planned to ride this ride with a bit more speed than last year if trails allowed.

I glued her boots on Thursday afternoon as I  had to leave earlier on Friday. I’ve been mainly riding only in boots in front but decided to use four as I knew it would be rocky. This was also my first time reusing boots that I had ground the glue out of. I used a wire brush on a power drill and that worked very well, as I don’t have a drill press. People have been asking if you can reuse the boots and I say you can, but I haven’t. Now I have and it worked real well.

We had a 7:30 ride start as it is Turkey season and the park people asked we start later. That was super: I got to sleep in a little. Our first loop was 20 miles. I spent the day riding with friends from Vermont knowing they would be riding at a good pace. We were averaging ten miles an hour all day on the rocky loose footing. I was very pleased with Grace’s performance in her four boots. She seemed to have good traction and I didn’t worry about stone bruises or rocks getting stuck in shoes, which happened to my friends horse last year and we had to have it beaten out with another rock.

The first loop was a lollipop and when we got back to the stick we took a wrong turn and got a little lost for a mile or and had to turn around and get back on track. We got in and pulsed down and went back to the trailer for everyone to eat. The next to loops were each 15 miles and we had gotten back in the pack and worked on covering ground where we could.

We came in from the second loop and vetted right through to make a up a little “line time”  waiting in the vetting line. We went out on our last loop in about 16th place, and away we went.

It was getting warmer from the afternoon sun. About five miles into our last loop we came to a brook crossing and Grace wanted a drink and my riding companions went on. I figured I would let her drink her fill and catch up. Ha, she did and we went right along and never caught back up.

This is the time is a endurance ride when things can get interesting. We went along, Grace wanted to catch up with her friends. We passed several horses and she just kept going, she felt just great!  We finally caught up to her buddies at the finish, go figure they were a couple minutes ahead and in tenth place. We were 11th.  The finish line was not at camp so I had to go up to the finish from 11 on. I jogged in the last half mile pulled her tack put some water on her and went in and got my completion. What a great day! 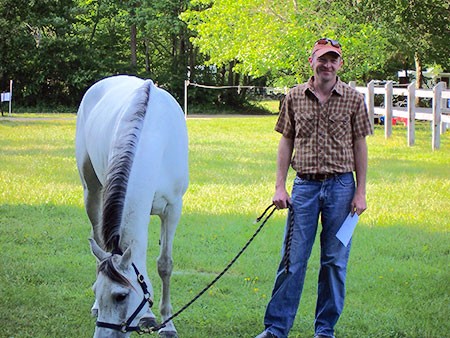 I had entered Grace in the AHA division so we were able to go back up for BC. Her metabolics were great and she looked wonderful and got 9 for her gait. Even though we missed BC by a point and a half I was just thrilled and had a wonderful ride. I was so lucky to find this nice mare. I also really enjoy watching her develop into a true athlete.

So all in all the NEATO ride was a nice ride and worth trying if you would like to see some new trails and meet some great people.