Steve Karshner wrote a great article about rehabing Navicular hooves with the use of boots. He uses the EasyCare RX boot and has also used the EasyCare Boa boots.

“I was surprised to learn that  some of the brightest stars in this industry don’t use boots in their approach to Navicular rehab. I have to say that I, too, have rehabbed many Navicular cases without boots over the years, but it was a much longer and bumpier process than the method I use now.”

Getting a Navicular horse to put his heels down first immediately after pulling shoes is virtually impossible without boots. Watching the animal in pain at the beginning of the process is hard on the owner, and is probably the main reason that a lot of these rehab attempts fail. These attempts end in a few days with the owner putting the shoes back on, because they can’t stand to watch their animal suffer. How many times have you heard that story? For that reason alone, I would think that anyone that could use boots, would do so. There are going to be rehab attempts that fail, but let it not be because we thought so much of our personal skills or philosophy that we didn’t use all the tools at our disposal to relieve the horses’ pain. If the boot fits, wear it!!!

I am convinced that the significant reduction in the time it takes me to relieve a horse’s heel pain is directly related to the improvements in our boot and hoof pad products. There was a time when I thought six or eight months was a reasonable time frame to relieve Navicular pain. Then, I did it in six weeks using a Boa boot and frog pad setup, with most of the pain subsiding in just three weeks, and an entire inch of heel decontraction in four weeks! Seeing those kind of results in a horse that was likely one of the most severe cases I’d ever seen was quite a wake-up call.

I’ve been using the EasyCare Boa protective horse boots for years. They can be used for rehab, and are a very good boot (for the right foot), on the trail, after the rehab or transition is done. I am also using the Easyboot RX now, and having great results with it. At present, I have three horses in rehab, and all the boots are holding up great. It’s not recommended, but I have used the boots for light workouts in the round pen, and have allowed the horses pasture time in them , as well. To date, each and every one has held up nicely. One set of RX’s have been in constant use for over three months, with no problems. Just make sure the fit is good if you plan to let the animal move around a lot in them. Sometimes they will twist if too loose, and then the frog support can be compromised.

Some other reasons I’m getting quicker results is that, in certain conditions, using the boots allows me to be a little more aggressive. For instance, taking toe off of a foot with an underslung heel and a minus three degree palmar angle is often the only way to get the coffin bone close to ground level, and initiate the process of getting the toe and the heel back under the leg, where it belongs. How many times have you heard your farrier say (or have you said), I just can’t grow any heel on this foot?. Whether you are dealing with a Navicular rehab or an asymmetry problem, giving the animal the comfort, support, and pain relief that a good boot and pad set-up provides is crucial to keeping the rehab progress moving forward and keeping the owner happy and confident.”

Check out all of the information that Steve offers at his website….go to
www.stevekarshnernaturalhoofcare.com  and you can also email him.

Below is the foot wrapped in the Rx therapy boot. 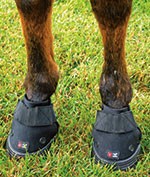 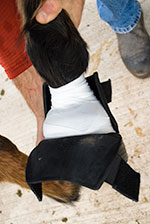