Two more endurance rides have come and gone for Replika and myself. Our second ride of the season was the newly re-named Eagle Spring Fling. We have an advantage for this ride in that it’s on our home turf. The disadvantage is having to go *through* home twice. I usually skip this ride for that reason alone, as our horses just can’t understand why they can’t go back to their pasture the first time through!

Given the fact we know the trails, I know just how barefoot friendly they are. That said, I decided to use my Easyboot Gloves again on all four feet to keep up with all of our work we did desensitizing her to the gaiters. Much like our first ride of the year, she had no rubs or irritation throughout the entire 55-mile ride. Again, we were 5th place at almost the exact pace we did at the previous ride. If anything, we’re consistent! This ride was definitely more difficult on boots than the first ride, as we dealt with slick mud, boggy bogs, sharp uphills and plenty of water crossings. I did experience my first hind boot loss on Replika, however, when she spooked hard and pulled her left hind boot off with her other foot. At that point in time she realized a giant badger had emerged from the ground and wrapped his grimy little hands around her fetlock, attempting to eat her as we were. She proceeded to kick the living snot out of him until the gaiter, er, I mean badger let go. It was impressive and the gaiter was completely obliterated. One of the greatest things about these boots is the fact that the gaiter can be replaced, or, the shell can be used as a Glue-On. Either way, it’s win-win!

Replika and I in the morning mist at Eagle Spring Fling. Steve Bradley Photography. 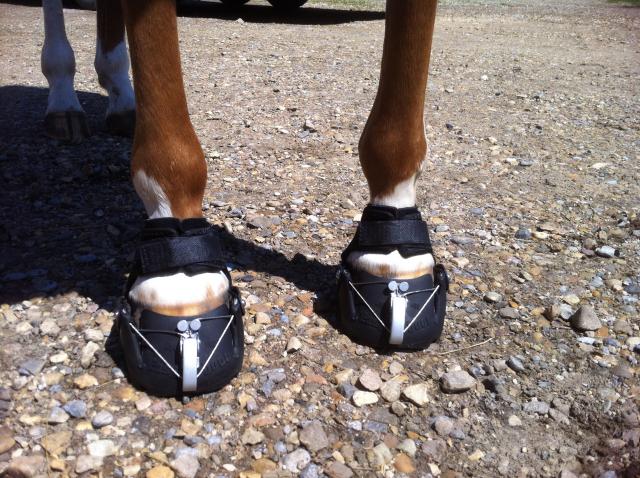 We felt like we were in the moorlands of Scotland with all the green and foggy mist. We are desert people and obviously not used to the humidity or green landscape! Most of this loop was extremely slick and boggy. Barefoot behind probably would have been a good idea, although she was very secure in her Gloves.

I pulled her other boot and we continued on into camp where we completed the ride in excellent shape. I don’t think any amount of athletic tape would have saved my lost boot given the way she stepped on herself. Thankfully, she was wearing rubber boots and not steel shoes that could have hurt her. After the ride I pulled her tack, pulled her Gloves and that was that. No muss, no fuss. 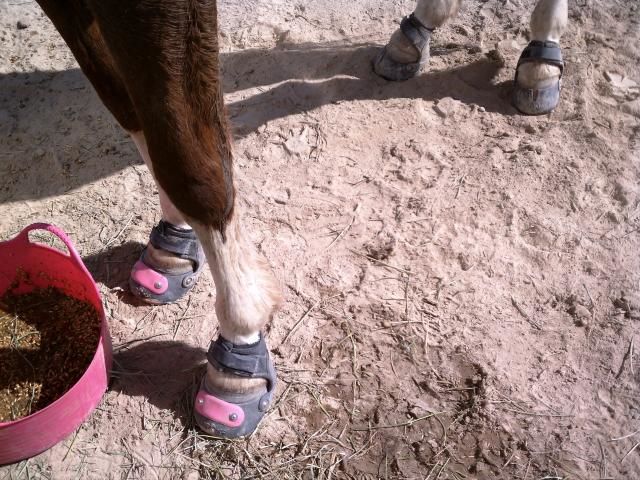 After the Eagle Spring Fling, Replika was given her standard two weeks off where I was able to focus a bit on my geldings. But before I knew it, we were a week away from the Owyhee Fandango, where I had planned on doing a 100. What’s the saying? The best laid plans? Well an outbreak of Equine Herpesvirus out West here put a big wrench in most everyone’s travel plans regarding the Fandango ride, and for a while we weren’t sure what was going to happen. A week before the ride we decided to continue on with our plans, only now the weather sucked! I decided to play it safe and enter the 80 mile ride which worked out well.

Due to the fact I am still a paranoid freak of an endurance rider, I was concerned about the gaiters of the Gloves that haven’t caused any problems all year to all the sudden cause us problems. In hindsight, I’m pretty sure they would have been just fine. Regardless, I decided to torture myself with the process of gluing, convincing myself it was worth it as a practice run for our next 100. I also told both geldings to expect their endurance careers to be almost exclusively done in Gloves and not expect any of the special treatment Replika gets. I think starting them now (while they are at the beginning stages of conditioning) in Gloves will prevent the problems we had transitioning Replika not only from shoes to boots but to the gaiters as well. 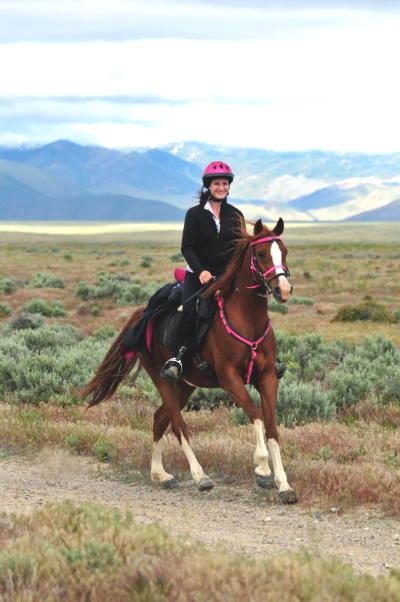 Another Steve Bradley great. 30 miles into the 80 mile ride.


Gluing on was messy, which it usually is, but again I find the addition of Adhere at the top of the boot smothered in Goober Glue is just the ticket. Although the right hind boot twisted a bit before it set, we examined the break-over and watched her track straight and decided it should be ok for the ride. If there was any boot I expected to lose, it was that one, but it is still as stuck on today as all the others are. I was thankful for the full protection of not only the boots but also for the cushion of the Goober Glue down by the river where she trotted back and forth over the sharp volcanic rock on parts of the trail. We rode into camp at the finish at about 5:30PM where we completed the ride with an awesome CRI and excellent final exam. Given the fact I was the only entry in the 80, we were first, last, mid-pack and turtle. Our ride time was a bit over nine hours, which was a pretty quick *true* 80 mile ride! She looked great that night and the next day. I just love this mare. 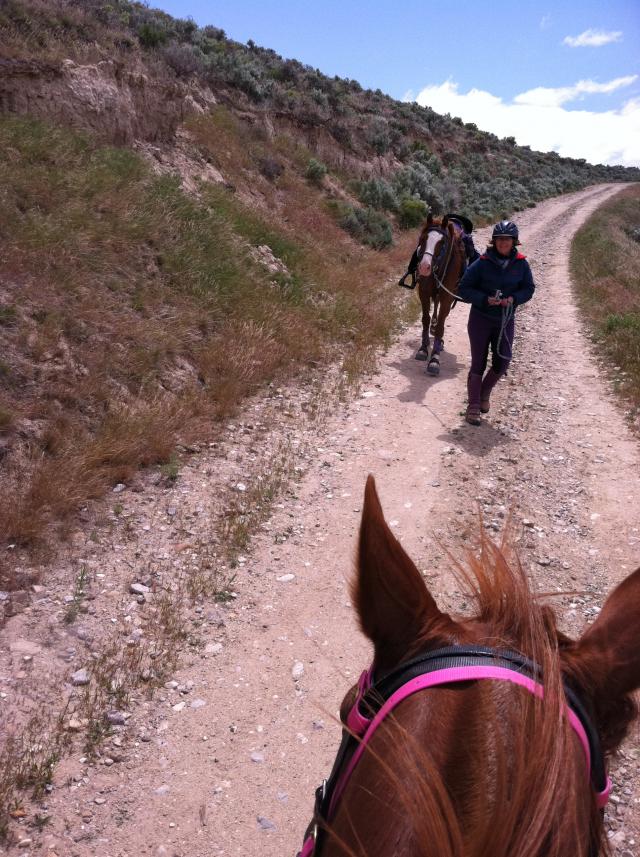 Running into Karen Bumgarner at Z Summer Thunder headed down into the canyon on the 100 mile ride. Unfortunately it just wasn’t Thunder’s day, but the upside of that is they weren’t stuck out on the trail when the nasty storm blew in. Karen has done several long rides with Easyboot Gloves and no problems. 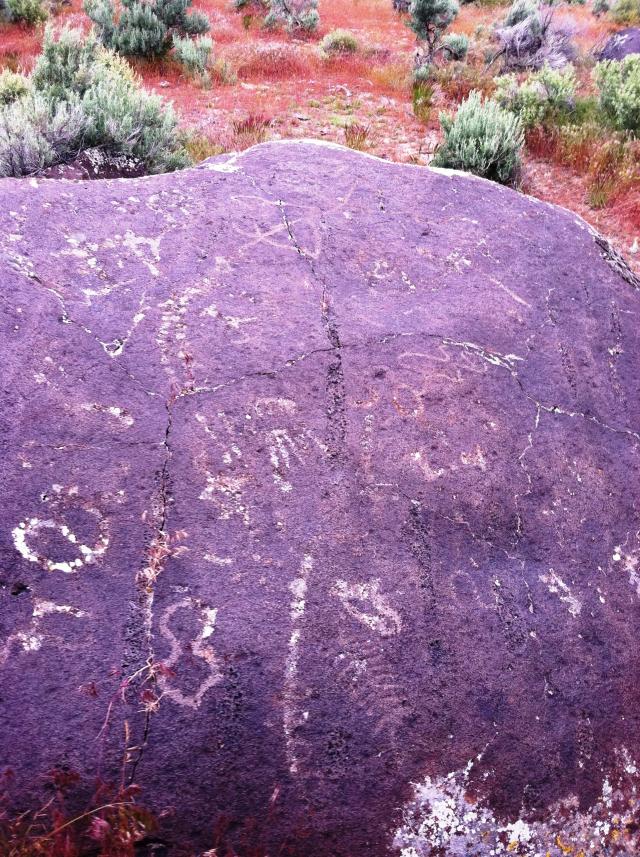 The petroglyphs that we ride through on this loop are amazing! 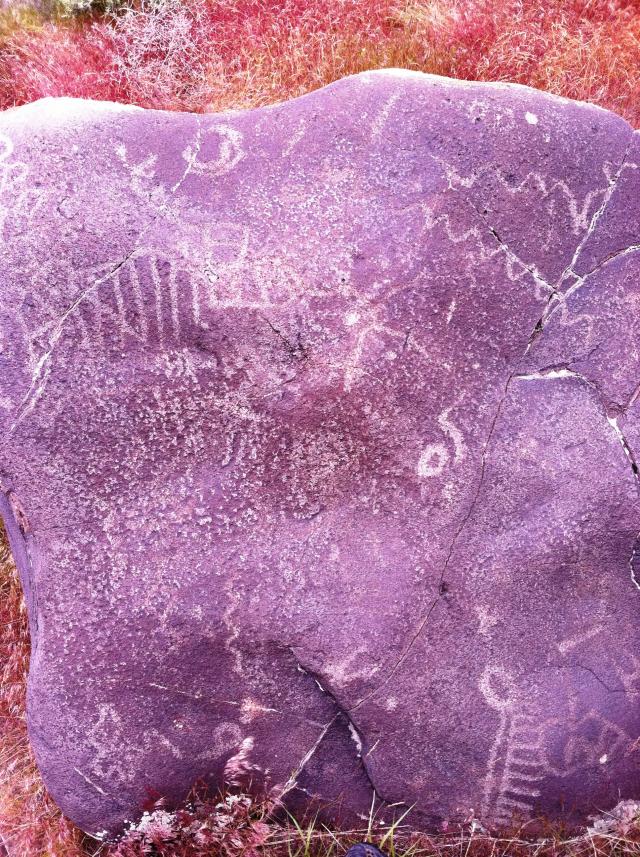 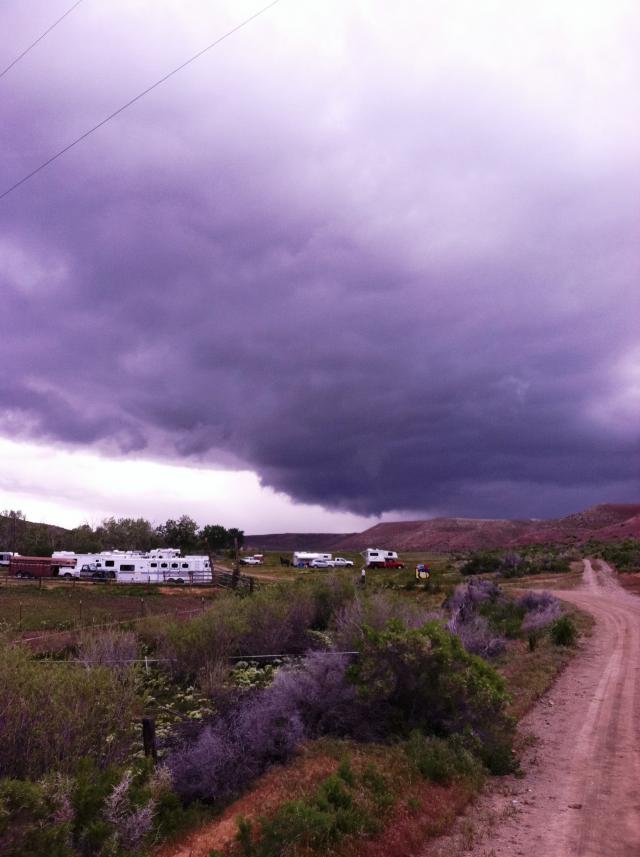 Another reason I was super glad to be finishing up at 80 miles! This storm hit pretty hard!

I have now ridden over 1,500 AERC miles in Easyboot Gloves and Glue-Ons. I can’t even imagine the number of trail miles I have ridden in them, but I’m sure it’s substantial. I could never even consider going back to steel shoes, or relinquishing the control I have over my horses’ feet. There should be a disclaimer at the bottom of these blogs and on the package of boots in fine print warning people about the effects of knowing too much and learning more. Be warned, your life will never be the same, and neither will the life of your horse!