Over the July 4th weekend I had the privilege of attending the aptly named Mendocino Magic Ride. The ride was magic in so many ways for me. The weather was magical. July in Coastal California is commonly shrouded with fog and mist, but we were treated to crystal clear blue skies and warm, but not too hot, weather. It did get a bit windy Friday, but thankfully it wasn’t windy the whole weekend. 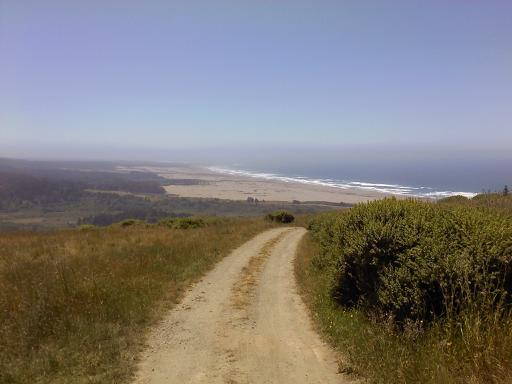 My horse, JAC Eagle Cap was magical to me. He really did well and I had a fantastic day with him. He has come back from a severe illness last fall and I finally feel as though he has returned to his normal self. My Easyboot Gloves were magical in the way they performed and stayed on all day without a problem. I was really pleased! 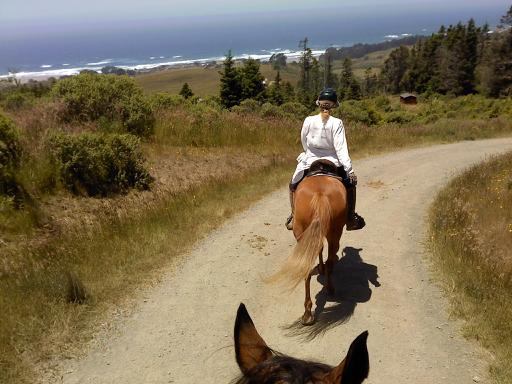 I went to the ride with friends from the bay area; Pamela, who rides Eagle’s sister JAC Chico’s Fortune (aka Fanny) and friend Kirsten, riding Canyon. I went to Walnut Creek Thursday to meet up with the girls as we would be taking Pamela’s trailer on this trip. Both Pamela and Kirsten ride barefoot/booted as well. Pamela is in the process of switching over from a different brand of boots to Easycare Gloves. I fitted her mare and we had ordered her brand new boots.

Imagine our surprise when on Thursday we found Fanny’s pasterns and fetlocks covered in little, oozy sores 🙁  Fanny is super sensitive and the best we could figure is she had a reaction to fly bites.  This left us in quite a quandary as to what to do with boots for her as surely anything rubbing on them would be a problem. 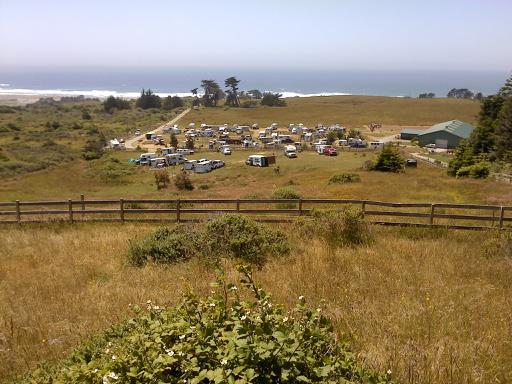 We had a trailer tire blowout on the way to the ride so we arrived at camp much later than we’d planned. Ridecamp was located in a grassy meadow on a bluff with a spectacular view of the ocean at Lari Shea and Harvey Hoechstetter’s Ricochet Ridge Ranch. Parking was a bit tight and they were trying to get us all in to leave room for later arrivals. Since we had to hang horses on HiTies off both sides of the trailer we needed extra room. We finally were able to help somebody move a tent which gave us the room we needed. Problem solved! We were a bit stressed at that point with all we had to do with getting ready, sorting out boots, tack, etc. that unfortunately we missed the wine tasting and potluck that was held in the large shop/barn building at the facility. We did make it to the ride meeting though and cracked open our own bottle of wine which was much needed and brightened our moods!

I had decided to apply my Easyboot Gloves the night before the ride. I really wanted to make sure they worked well and I wanted to take the time to clean his feet well, apply athletic tape and get a good fit with the boots. I used Mueller Athletic tape and tried something new in using more tape than I have in the past. The boots were a very snug fit and I had a good feeling about them. We were still debating what to do with Fanny, Pamela’s mare. Natalie Herman ended up foaming regular old Easyboots onto her hinds and Pamela decided to use the boots she was used to on her fronts as there was less contact with her sores. This combo worked well and all her boots stayed on all day. I have to give kudos to Natalie for taking the time out to help anybody that needed it. More often than not, every time I saw her she was helping somebody out with their horses feet or boots. Quite impressive to me who can barely handle getting my stuff organized and boots on my own horse without melting!

The next morning came very quickly and went even quicker since our alarm had failed to go off (oops!) and we woke up half an hour late. We did fine though and I was really really thankful at that point I’d booted the night before! We left after the big pack and soon were jogging along single track through ancient redwood trees and old logging roads through beautiful meadows. It was really indescribably beautiful. We did a lot of climbing, some technical trail and lots of single track. This was not an easy ride, but my favorite type for sure! 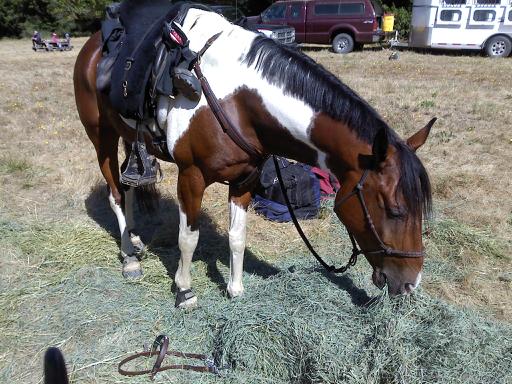 Our first vet check was 18 miles (or so) in. The check was in a beautiful meadow. We had a half hour hold there. All our horses vetted well and then quickly settled in to the smorgasbord of hay, carrots and mash that was provided. Cynthia had suggested that everybody should take a walk into the old growth redwood grove which bordered the edge of the meadow just to take in it’s beauty. I did take a moment to step in by myself and I’m really glad I did. Having grown up on the California Coast I have a fondness for redwoods and this grove gave me a tremendous deja vu feeling of my childhood. It felt like a very spiritual place and I could have spent all day there, just sitting by myself. Again, more magic.

After the hold it was another 17 miles back to camp for our one hour hold. The trail back to camp was more of the same. Climbs, descents, single track, technical and many amazing ocean vistas. All day long we were treated to various wildflower displays, especially the abundant little daisy’s. It’s all one big blur of beauty to me. 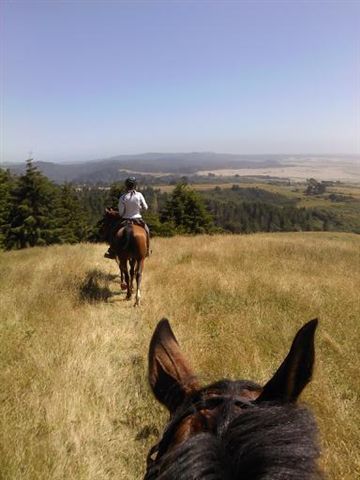 At our one hour hold at camp all the horses again vetted well and we got them settled in with their mashes and hay and helped ourselves the the lunch provided by management (this was an ALL frills ride!) ala Duck ride style; premade sandwiches in coolers, tubs of candy and drinks. To me it is such a luxury to be provided lunch at a ride so I can grab and eat and have the time to care for my horse and even sit a bit. My boots were all looking good at lunch and I had totally relaxed about them at that point and quit obsessively checking to make sure they were still there.

We headed out for our last loop refreshed on on horses that were looking great. I think we moved out the fastest on this loop. Lots of trotting on wonderful, redwood carpeted single track and even a gallop up a steep hill! Lots of fun and my boots stayed put! Soon we were back at camp and our magical ride was completed.

I really had a great ride and my horse felt really good. He has been barefoot since Dec. 21st of last year and he has really thrived. Our friend Kirsten is a chiropractor for humans and horses.  She has treated Eagle in the past and treated the horses the evening after the ride and the next morning. She pulled me aside to tell me that when she had initially treated Eagle a year or so ago she really thought he was arthritic or had some degenerative joint stuff going on but now she finds that his joints feel like the joints of a young horse! I think this is really significant and the only thing that has changed with this horse is that he has gone barefoot and uses boots when he needs them.

I do want to mention that if you have had rubs from your gaiters, don’t despair! Eagle had no rubs after this ride. In April I took him on the Nevada Derby and had to pull at lunch due to rubs making him sore. The lesson learned for me was to train more in boots. I had been using them occasionally but riding bare a lot. Their skin does adjust and toughen up to the gaiters. Also I learned it is probably not the best idea to use brand new boots on a ride unless your horse is really used to them. I broke my own rule by using new boots on the rear for this ride, but it went fine. I also have made simple neoprene wraps to carry in case of rubs. They work well.  If nothing else, making them and carrying them alone will insure you never have a rub again :).

After the horses were all cared for we took a bottle of wine and headed over to the amazing catered dinner and awards ceremony in the barn. The dinner included tamales, pork, chicken, a rice dish and yummy chocolate ganache cake for dessert. It was all very good and spicy! An award was given out for the first booted horse which I thought was really nice and a bottle of wine to the last 10 riders which I thought was really cool. The completion awards were nice ball caps with the ride logo on them.

It was fun relaxing after the ride with friends and chatting with everybody. It was announced that fireworks would be able to be seen from the arena in ridecamp, but us girls were so relaxed later in the trailer that we never made it over there but did see a few from the trailer. I’m sure it was a spectacular show.

Due to the length of our drive, we had elected to drive home the next morning. We got a leisurely start and hit Starbucks in Ft. Bragg. We must have been talking and enjoying our coffees a bit too much as we missed our turn off onto Hwy. 20 and decided just to keep driving on Hwy. 1 and cutting over at the highway which heads into Cloverdale. We ended up being extremely pleased as we were treated to a beautiful, crystal clear drive through Mendocino and along the coast. The highway up to Cloverdale was not nearly as bad as we thought it would be and took us through more beautiful country and some wine growing areas. It was tempting to stop at some of the wineries!  It was a beautiful drive home and I got to experience part of California I’d never even seen before.

I’d like to thank Easycare for my ride entry and for the technology which created my boots and allows barefoot/booted endurance riding to be really a doable thing. I’d also like to commend and thank Forrest Tancer and Cynthia Ariosta for putting on a ride that was nothing short of magical! 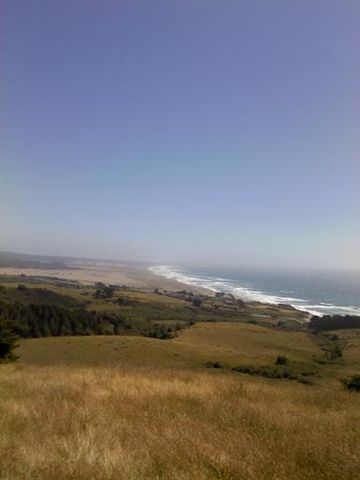 They really did a great job and this ride is not to be missed in the future. I’d also like to give special mention and thanks to the land owners who allowed us to camp on and share in the beauty of their lands. Firstly, to Lari Shea and Harvey Hoechstetter for providing ridecamp and facilities at the Ricochet Ridge Ranch and allowing us to ride through their beautiful trails and also to the Jackson Grube Family, Nan Deniston (Parker Family), Campbell Hawthorne Timber Management, and Mike and Yvette Maguire. We’ll be back for sure!