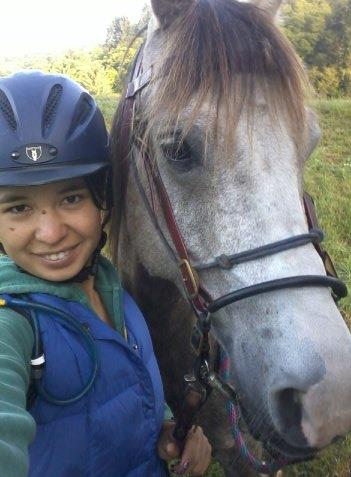 I had looked forward to this ride all season, but as it came closer, I realized I more than likely was not going to be able to make it. I don’t have my own truck and trailer so I am at the mercy of my friends when it comes to going to rides. I also didn’t think I would be able to afford to go, living on a student’s budget and all, but then I saw the EasyCare contest on Facebook and I thought I would just enter it and see what happens. While I was waiting to hear back from Easycare, I tried to scrounge around and find a way to make it to the ride in the event that I won. My friend Cory offered to drive me and my horse and my friend Karen offered up her trailer. I ended up wining the entry and my horse Gunz and Rozes and I were good to go.

Author ShaoLan and Gunz and Roses.

We left early the morning of August 20th and proceeded to make the 4 hour trip from Mckinleyville to the ride. When we arrived I realized this was probably the biggest ride Gunz and I had ever been to. It took a lot of maneuvering to find a spot for our trailer, it was tight squeeze and I was pretty glad it was Cory driving the rig and not me. I got Gunz out of the trailer and he immediately started sizing up the competition. He was in full Arab form, tossing his head and snorting. We went to go vet in and he was prancing and acting up, he even reared when I went to trot him out for the vet. I kept thinking if this is a preview of what tomorrow’s going to be like I am going to be in for one wild ride.

I took Gunz for a little test ride before dinner. He was in rare form, ran bucking up the hill, the riders we passed me looked at me like “who is this crazy lady riding this wild pony sized horse?” He attempted to throw me a couple times and all I have to say about that evening ride, is that we definitely had a bucking good time. I got Gunz settled in with grain and then went to dinner, it became very clear at dinner that this was definitely a perks ride, there was paella and assorted wines to choose from.

I went to the ride meeting after that and started to panic when I heard that we would have to cross a river that was belly deep on a 15.1 hand horse (Gunz is barely 14 hands), this would mean Gunz would have to swim. I had never swam Gunz before and with the attitude he had been showing all that day I kept thinking this could be a bad wreck in the making. I continued to worry about the water crossing most of the night. The next morning came, and all the attitude that Gunz had been showing the previous was gone and he stood there calm and collected. I fed him and got him all saddled up and ready to go.

We approached the start and there was about 40 horses and riders milling around. Gunz true to form (he has done this at every ride we have gone to) gets in the middle of them and pees. The ride starts and everyone is pretty bunched up. About 20 minutes into the ride we started separating ourselves from most of the pack. We really started moving when we went downhill, Gunz has an, amazingly fast walk, that most people are stunned by given his size. We eventually got to the water crossing and Gunz plunged in without any hesitation, I then knew I had nothing to worry about for the rest of the ride. 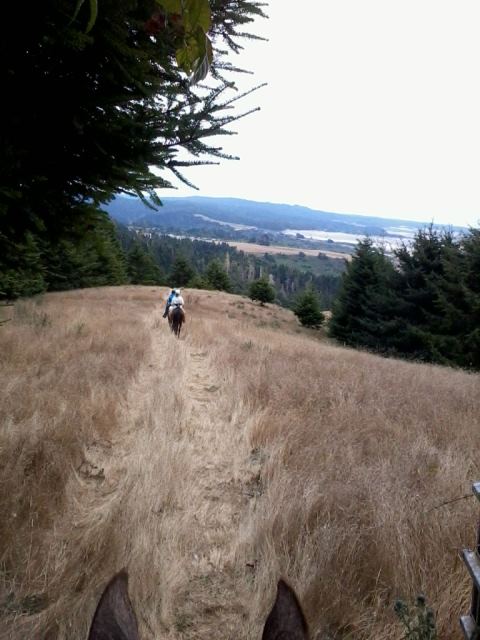 Out on the Mendocino Magic Trail.

We got to the first vet check, and Gunz pulsed right down. He went over to a pile of carrots on the ground and proceeded to take one bite out of each one, I guess he felt the need to make his presence known. We took off on the second loop, ahead of most of the pack. We had a great second loop.

We got to our lunch hold and vetted in without any problems. I pulled his tack and gave him his mash, After our hour long hold we headed out on our last loop. The fog had started to clear so I got to take in the spectacular view of the ocean as we climbed up the hill. We flew through the third loop and ended up coming in third with a time of 5:07, the fastest 50 we had ever done and only Gunz’s third 50 ever.

Gunz was looking and feeling good after the ride. We got great vet scores when we vetted in. I was disappointed I couldn’t stay for the awards ceremony. Only a couple hours after finishing the ride, I loaded Gunz back into the trailer and we headed back to Mckinleyville.

A few days after the ride I got an email letting me know that Gunz had gotten best condition, I couldn’t have been happier. I will definitely be back next year, hopefully for both days! For more information on the 2012 edition of Mendocino Magic, go to mendocinoendurance.com.