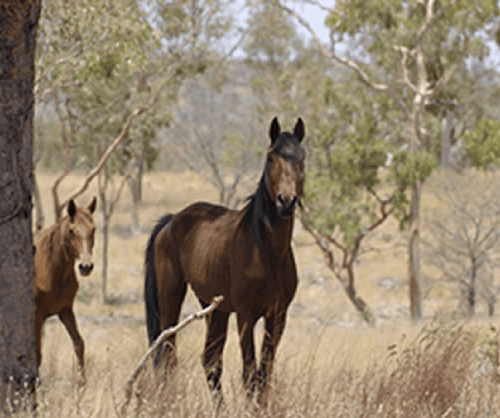 Webster and Wikipedia defining ‘normal’ as ‘commonly observed’, and ‘average’ as the middle of set values.

And what about the definition of “pathology”? Often referred to as a ‘diagnosis of disease’. But what is a ‘disease’?  And is a condition that is ‘commonly observed’ and ‘average’ still a pathology or is it then just ‘normal’?

These kind of questions occurred to me when reading up on Brian Hampson’s Australian Brumby Studies. 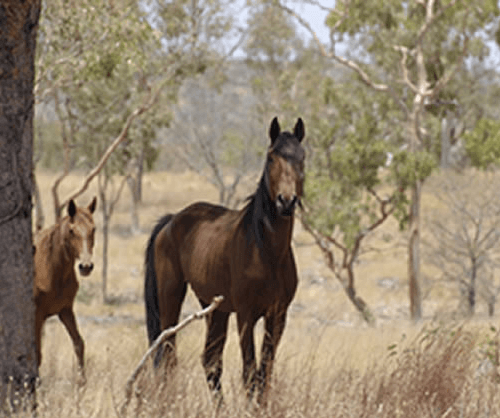 Brumbies in the Australian Outback

67% of all the desert brumbies examined by Brian Hampson suffered from chronic laminitis. Yet, the external appearance of these hooves was not at all indicative of laminitis. In fact, they all showed the typical “ideal” appearance of desert hooves: short and rounded hoof walls, worn mustang roll, minimal flaring and few , if any, hoof wall rings.

While the wild horse mustang hoof has been proposed by some, e.g. Jamie Jackson, as the ideal model of an equine hoof, little, if any, research had been done by looking inside these hooves. And once again the saying: there is more to it than meets the eye, is proven true yet again.

There is plenty of evidence now that feral horses from hard substrate environment suffer from traumatic laminitis comparable to the well-known road founder of our domesticated horses.

Already in 1993, Robert L. Linford induced traumatic laminitis simply by trimming the hoof wall to the same level of the sole and placing the horses for four month on hard substrate. This procedure caused coffin bone remodeling and sole bruising with lamellar stretching and bruising. It also calcified the ungual cartilages of the navicular bone.

Now, these high incidences of laminitis are probably not only because of the concussion. It can be assumed that a lot of the feral horses are also insulin resistant and might have fed excessively on high sugar content grass, which is abundant in the wild after the first few freezing nights in the season.

Brian Hampson found only 3% of the feral front hooves to be free of abnormality and pathology. 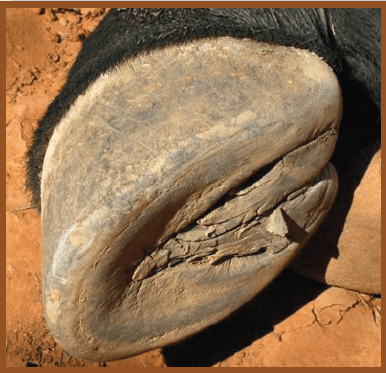 Is this Brumby hoof suffering from laminitis?

This does raise the question whether we always should adopt the feral hoof model as an ideal and mimic it in our barefoot trimming and natural hoof trimming within our domestic herds. Especially  the feral hard substrate model as pictured above.

Specifically I’m asking myself whether I round the hoof walls too much and whether the sole of the hoof is bearing too much weight. Considering that the often revered mustang roll is only distinctly observable on feral horses that are forced to travel excessively over hard substrate, rocks and mountains and often have to dig for food and water and in the process wearing down their dorsal hoof wall to the extreme of suffering from laminitis. If then the feral hoof is a result of excessive unnatural wear and tear, do I want to imitate that model  on our domesticated horses hooves? Should I maybe allow the hoof wall to bear a little more weight, using that dreaded word ‘Peripheral loading’? After all, just like the caudal foot is designed to absorb shock, so is the front part of the hoof, being more rigid, designed to bear weight. The hoof wall tubules are designed to dampen the load before transmitting it to the joints and skeleton. (Compare to my last month post “The Caudal Foot“) 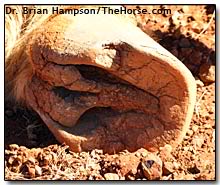 The mustangs in the Nevada desert, the brumbies in the Australian interior, the Taikh horses from Mongolia and the donkeys of the Asiatic interior have to travel excessive large distances to find food and water. When both are abundant, feral horses only travel voluntarily between 3 and 6 miles a day. Needless to say, their hooves look a lot differently and much more similar to our domesticated hooves as the two photos below indicate: 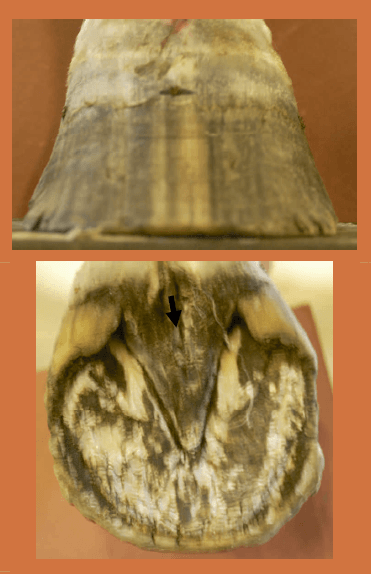 These two photos, same hoof seen from dorsal and plantar aspects, look a lot like many of our domesticated horse hooves. Yet, it is from a feral horse, living in Australia on softer and more fertile ground. This horse does not need to travel long distances for food and water: hoof wall long (peripheral loading?), laminar stretching, no mustang roll, heels underrun, starting to collapse, crack on left heel.

So, what is normal, what is average, what is a pathology? If only 3% of the feral horse populations have ideal healthy hooves, is it fair to say that 97% of all horses hooves are suffering from pathology or do we need to redefine that word ‘pathology’?

Hampson also discovered that high incidence of laminitis in four other studies around Australia.

Of his radiographed horses hooves

I might add that these horses are the survivors of the fittest. The ones with even more hoof problems already had perished. Putting this thought in the equation, the domesticated brethren are not doing too bad.

Professor Bruce Nock, however, a scientist in its own right with an impressive record of accomplishments, questions the research and findings of Hampson and Chris Pollitt. In fact, he wants the inner pathology disregarded, because it is not obvious to the naked eye and thus it should not matter. True, when a horse is lame on all 4, it is sometimes hard to detect lameness. That is where science comes into place. Hard to understand how a scientist can question science. Come to think of the old question, if a tree falls in the woods and nobody hears it, does it still makes a noise? If a horse is lame on all 4 and one cannot observe it, is it still lame? Is there then a pathology or not? And is it just normal and average?

Nevertheless, there is a verbal cyberspace war ongoing between high caliber scientists. Fascinating to read up on it. Providing a great learning opportunity for us lesser scientific hoof care students and hoof care providers.

Barefoot Trimming and Natural Hoof Trimming, yes, they are good things. But who is setting the standard, which model are we following? There are many options available for choosing, the feral hooves come in all kind of shapes and forms. The environment is mostly responsible for modeling the feral hoof. So, might the answer be again: it depends?

Horse Hoof Trimming should provide the best outcome for our horses, I, for my part, constantly question what I’m doing. Only through critical reevaluation can I make sure that I do not get stuck. So far I have never seen anywhere that following an ideology  to be in the best interest of our equine friends.

What do you think?  I would love to hear and read your comments.