This week Uno and I embarked upon Phase 2 of his suspensory injury rehab – once a day I have to ride him at a walk for 30 minutes on “firm, level ground”. The 30 minutes a day is manageable, but the “firm, level ground” is a joke when you consider we live on top of a hill and our driveway is 300′ long and goes down vertically about 120′. So we tiptoe down the driveway before reaching the relatively “firm and level” lane below. Despite being on stall rest, Uno has settled down and we are completing the rides with a minimum of histrionics (if you ignore the few days of leaping about). He goes for another ultrasound in three weeks time to check his healing. 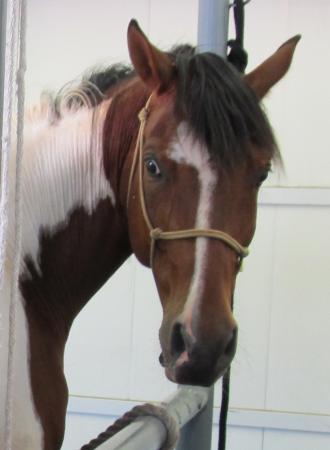 Uno during the diagnosis-phase of his injury. He got very tired of being poked with needles.

Although I hadn’t ridden Uno in a month while we were figuring out his diagnosis and just hand-walking for short distances twice a day, I have been riding Jackit the pony – and the juxtaposition of the two is quite amusing. Uno is about 15:3 hh, big, solid, square, with long graceful strides. Jackit is not quite 13 hh, with short, quick, busy steps, and very pointy on top – staying with him in that sweet-spot is quite a challenge. 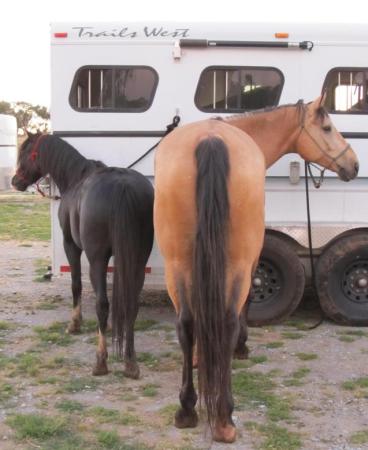 As far as the riding, I’m not used to this “little and often” concept. Usually if I saddle up a horse, we’re going to be out there for a minimum of three hours. Dressing a pone up in riding clothes for 30 minutes is odd.

But while I’m in the habit of shorty rides, I’ve been doing the same with Jackit and it has been really good for him – a little bit of riding every few days without boots is hopefully toughening up his feet. He’s still ouchy on rocks, but starts to accelerate as soon as he hits the hard-packed dirt.

Last week he was fitted for Gloves. When Roo first went barefoot a few years ago, he wore 00s on his back feet. Once his feet started to blossom, he outgrew that size and I passed his rather tatty Gloves on to another friend. Her horse’s feet also expanded and the 00s no longer fitted him either, so last week she passed them back to me. The Gloves are now completely sans toes, but hey, I need protection on the bottom of Jackit’s feet not the fronts, so they will work fine.

I shoved the boots on his front feet and whilst I got them on and his toe sat neatly in the front of the boot, clearly they were not a good fit side-to-side. His hoof wall was bulging over the sides… alas, he’s one of those dreaded short-toed, “Wide”-footed pones (new style of Glove due to arrive on the market later this year)(And sadly Easy Care won’t be making the new Wides in Jackit’s small size <sniffle>). 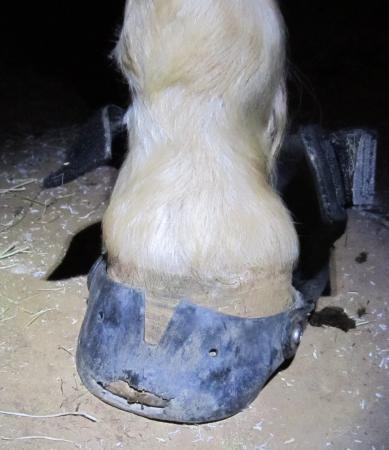 Filling the toe nicely, but not good from side-to-side 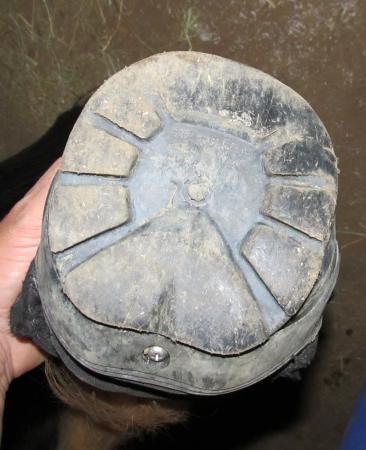 Clearly not a good fit – see the bulge on the right

Undaunted, I stuck the 00s on his back feet and, ta-da, they will work great: 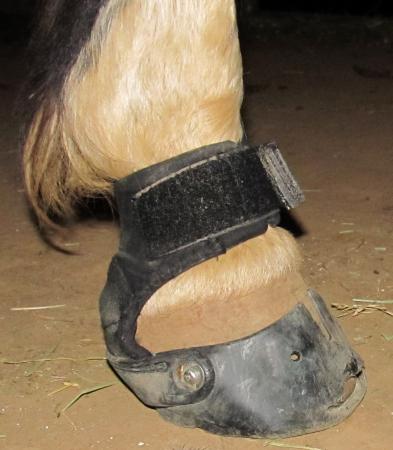 I’m thinking his little pasterns will benefit from the newer low profile gaiters, though.

Wondering what to do with his front feet, I rummaged around in Roo’s old Glove box and came up with one and half 00.5 boots: one gaitered Glove, one Glue-on. Hmm. 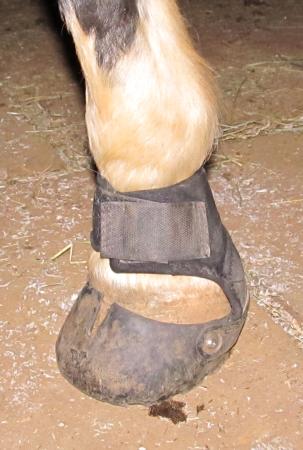 Although he doesn’t come close to filling out the toe, the side to side fit is good. I’m guessing from the way Jackit moves that he doesn’t torque his feet that much, so these might just work. If I can find a gaiter for the 00.5 Glue-on to make a pair, later this week I will try Jackit out in his “new” boots on the trail and see how we get on.

Last weekend Jackit did his first “real” trail ride: six miles of tough singletrack with 1,100′ of descent and climbing, 95°F heat, and lots of drop-offs (I’d feel more comfortable if he knew to move off my leg, so that’s something we’ll be concentrating on over the next few weeks) and he aced it. Very proud of my Small Thing.

Thursday 7th July will be his sixth birthday. I’m thinking we probably have another 30 years together to play.