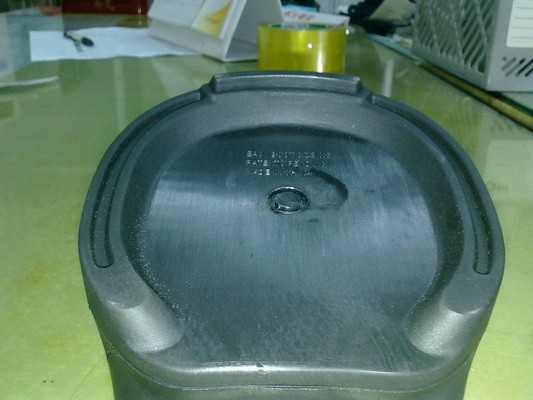 After over 20 years in the horse business and making protective hoof wear for horses I’ve finally been told by a horse owner via e-mail that “You’re going to hell”.

My decline and direction toward the underworld started when I purchased an Arabian race horse named Clunk.  I purchased Clunk with the goal of trying to make a urethane form of hoof protection that absorbed concussion, allowed the hoof to flex as nature intended and provide the traction needed to win flat track races.  I was pretty naive going into the project and found out very quickly that the flat track industry wasn’t going to allow just any Easyboot model and making a product to comply with the rules would not be easy.

The first design that I tried to use on Clunk.  Clunk was not allowed to race in this design.

I caught a break when Fran Jurga told me to contact Curtis Burns of No Anvil. No Anvil makes a flexible horse shoe called the Burns Polyflex Shoe that has been used with great success on the race tracks around the world.  The Burns Polyflex Shoe was used by Shackleford during his 2011 Triple Crown bid.  Shackleford placed 4th in the Kentucky Derby, Won the 2011 Preakness Stakes and finished 5th in the Belmont Stakes. The list of horses that have used the Polyflex successfully is impressive and includes greats like Curlin.  Curlin is the highest North American money earner with over $10.5 Million earned and many of his most successful years performed in the Burns Polyflex Shoe.  Because Curtis’ urethane shoe absorbs concussion and allows the hoof to expand and contract it has proven it has a place in the equine world and will continue to used by the best flat track horses for years to come.

What makes the success of the Polyflex shoe so intriguing is that Curtis Burns usually gets called in to work on a horse when the horse isn’t going right.  “The horse’s attitude has changed”,  “He’s a bit footsore”, “The horse has a bad quarter crack and has a major race coming up”.  Although Curtis is a true craftsman with urethane and adhesives, It’s rare these days for Curtis to work on horses himself as he refers the work to farriers that are skilled in the art.

The Polyflex has been used by trainers and horse owners as a tool in their bag of tricks to improve the performance of a horse.  When horses are racing at the Preakness, Derby and Belmont levels performance matters, millimeters matter and the difference between 1st and 5th is fractions of a second. 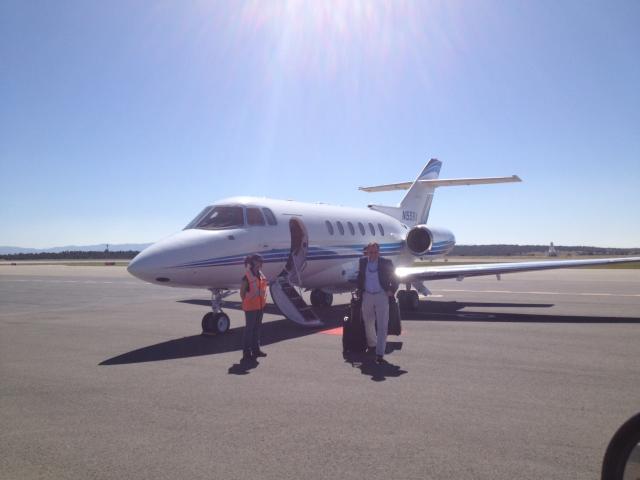 Curtis coming off a Hawker Jet.  The plane was chartered by a horse owner that needed Curtis to come quickly and fix a quarter crack.

Curtis went through a difficult process getting the Polyflex accepted into the racetrack industry and Fran Jurga thought Curtis could steer me in the right direction with our desire to run a flat track in a modified urethane hoof boot design.  Curtis and I hit it off immediately, and started talking about new urethane hoof shoe/boot designs that could benefit horses on the track and in other parts of the equine industry.  We are now partnering in a lightweight glue-on urethane shoe that absorbs concussion, allows heel flex, gives the hoof the opportunity to expand and contract.  A tool and an option for not only the race track horse but the backyard trail horse as well.

The Easy Boot/Shoe project continues and we are now testing several different urethane options, urethane densities, sole and frog support options and tread patterns.  I’m not yet sure where the whole project will go or if it will ever hit the consumer market, but it’s shown me that the horse’s hoof and the beliefs that surround it are often hotter topics than politics and religion.  I find it fascinating when I get hate e-mails from customers for potentially making a peripherally-loaded hoof protection device that could give them an option toward better hoof function and improved soundness. 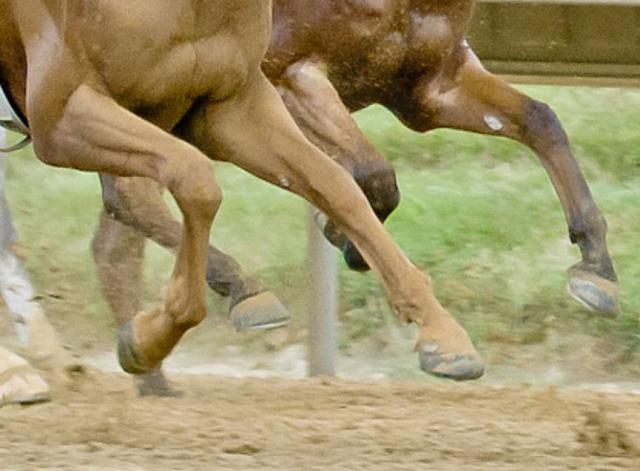 A close race to the finish. One horse in the EasyShoe prototype; the far horse is in an aluminum plate. 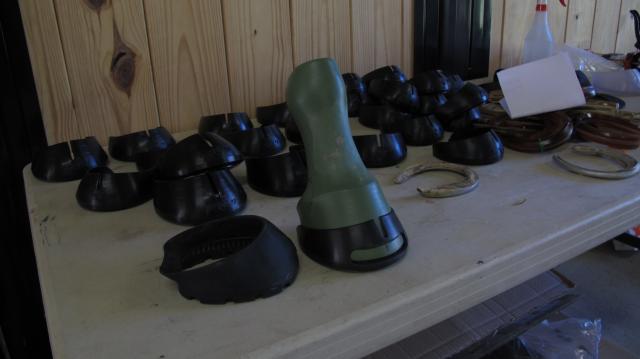 The world is not perfect and will never be perfect.  Companies, products and ideas are born to bridge the gap between perfect and the human race.

People are funny but in the end we are all in charge of our own health, the health of our equine partners and making the world a better place for our children.  We are all wired differently and look at products, solutions and ideas from a variety of viewpoints. The critics won’t stop me and many others from tinkering. I’d rather get the occasional hate mail than be one of the folks who during their life “knew neither victory nor defeat.”  The haters in life just bring me back to one of my all time favorite quotes and after reading it I just smile and continue:

“It is not the critic who counts: not the man who points out how the strong man stumbles or where the doer of deeds could have done better. The credit belongs to the man who is actually in the arena, whose face is marred by dust and sweat and blood, who strives valiantly, who errs and comes up short again and again, because there is no effort without error or shortcoming, but who knows the great enthusiasms, the great devotions, who spends himself for a worthy cause; who, at the best, knows, in the end, the triumph of high achievement, and who, at the worst, if he fails, at least he fails while daring greatly, so that his place shall never be with those cold and timid souls who knew neither victory nor defeat.”