In a great article dedicated to the “frog/pad” of the hoof, Ove Lind, founder of the Swedish Hoof School, gives his perception.

The dog does it, the camel does it, even the elephant does it, but very few horses do it. All animals are supposed to walk on their pads, but on the horse it is not even called a pad, In English, it’s called  “frog”, in Swedish it’s called “ray”, and in Norwegian it is called “crow”. All this tells me is that there is a very largely-spread misunderstanding about this tissue. The pad is a pad, and it is supposed to carry the animal. Even on a horse! If we would start to call it “pad”, even on the horse, maybe it would be more natural that it is supposed to carry a substantial part of the animal’s weight, instead of being hidden away from active duty.

This article is written to share my experiences, not to put blame on someone or prove someone wrong. Maybe it might help you explain why that special horse does not perform the way you would like him to.

1. It is made out of horn, which means that there are no nerves in it, so it cannot be sensitive in itself, The frog/pad is really just a protection for the sensitive inner parts. If your horse is sensitive on rocky ground, he is, most likely (like more than 90% of all other horses), suffering from an infected frog/pad that does not protect the inner parts as it is supposed to.

2. The frog/pad is supposed to be one solid pad. It is not supposed to be divided in two parts. Not even “just” in the back part. My experience says that tight lips are just as bad as more or less open ones.

3. If your horse moves easier and more freely with even a little higher heel sticking out from the hard sole, he is most likely suffering from an infected frog/pad. Infected frog/pads do not get any healthier by being elevated and pacified. The only thing that can heal the frog/pad in the long run, is exercise. Different kinds of chemical or medical treatments do not make the frog/pad sound, they only make it possible to start exercising the frog/pad.

4. If there is not exactly the same height of hoof wall sticking out from the hard sole when it is time for trimming, the hoof is not in balance. If there is less hoof wall sticking out in the toe region, the heels are too high, and most likely that is caused by the fact that the horse makes the sole in the back of the hoof thicker, to elevate the unprotected nerves above the frog/pad, when the frog/pad’s protective capability is impaired by an infection.

5. The frog/pad is not a blood pump. On most horses, there is not any blood at all near the frog/pad. It is , however, an essential foundation for the pumping mechanism. As soon as the frog/pad is elevated the slightest, or even not fully loaded, it impairs the effectiveness of the pumping.

Check out the Swedish Hoof School online for the latest news on the frog/pad and all other parts of the hoof. 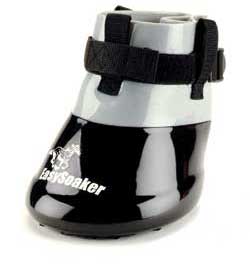