Central Utah has had an incredibly cold winter with temps well below zero at times. As a result, our trails are icy and slick. But Gypsy and I are both tired of arena work, so we waited impatiently for the arrival of the ice studs. They arrived conveniently on Friday while I was enjoying an enforced furlough day courtesy of my school district employer.

Time to ride! I drilled four holes in both of my old Epics. These boots are so well used they have virtually no tread left. I’ve trained in them for two years and have done four 50’s in them. I almost had them worn out until Dave Rabe replaced the gaiters on them. Finally with the tread worn away, I thought they really were done, but now they have new life again! It was a bit of a struggle to get the studs through the holes, but once I got the stud partially through, I used pliers to carefully grasp the tip of the stud and wiggled/pulled it down flush with the sole of the boot. I tightened the nuts and was done. I did the same with two Gloves for her hind feet. I discovered late in the process that using a powerful electric drill makes a much cleaner hole than the gutless cordless drill I used for the first three boots, and the studs were a lot easier to push through.

I was ready to saddle up. I headed for the hills just east of the freeway in Nephi. These are 4-wheeler/jeep trails through the sagebrush covered foothills. We started out cautiously over half-frozen mud, snow and ice. It took Gypsy about five minutes to realize that she had great traction and was quite secure. I spent the rest of the ride trying to convince her we weren’t out for a gallop! We had several miles of long trots and evens a few stretches of cantering. She never slipped—even on the steeper slopes. We scared up a herd of deer and a couple of jack rabbits and I’m sure they wondered what I was grinning about. Gypsy was in high spirits and there is nothing as fun as riding a happy horse! Today we went for a bigger test. I drove up Salt Creek Canyon to ride in the mountains. The snow packed road was slick enough to require four-wheel-drive. We rode up the Nebo Loop Road on the hard packed snowmobile trails, encountering snowmobiles and a even a couple of snowboarders. Snowmobiles were no problem-but the snowboarders caused a good spook-there’s just something too weird about humans with things attached to their feet like that! Some people even like to slip and slide! Personally, I was glad Gypsy felt secure and comfortable in her studded Easyboots. It was a great day to be out in the mountains! 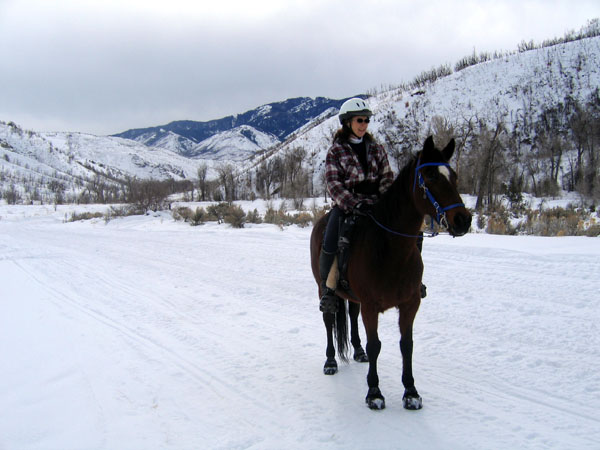