The American Farrier’s Journal just ran a nice article on hoof boots.   The article looks at the changes in the hoof boot world and gathered horse boot information/perceptions from many hoof-care professionals around the globe. 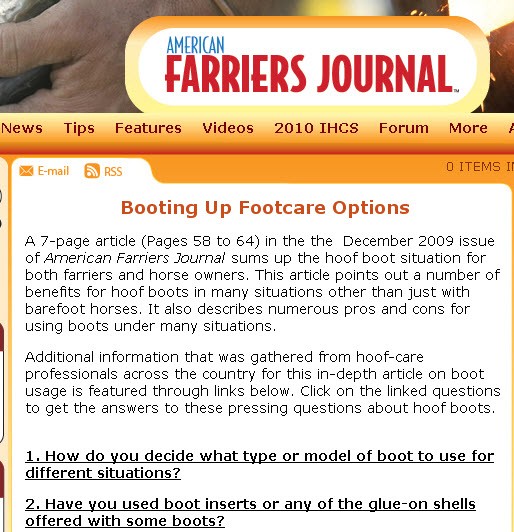 The article and feedback from the professionals is both encouraging and at the same time shows that we still have a great deal of education to do.  Here are a couple quick conclusions from my point of view.

1.  The American Farrier’s Journal just ran a 7 page article on hoof boots.  EasyCare and Easyboots were referenced many times.  How awesome is that!

2.  Feedback from Hoof Care Professionals like Pete Ramey and Linda Cowles was included. Both Pete and Linda are sharp and have used boots for many conditions and circumstances.

3.  One of the farriers that submitted feedback believes that “A shoe weighs approximately 12 ounces while a boot weighs upwards of 2 or 3 pounds”  “How much torque are these boots putting on the knees and shoulders of the horses?”  I love this type of feedback because it shows how far boots have come and how much opportunity is in front of us.  To correct the farrier, EasyCare’s new hoof boots actually weigh less than iron shoes.  A size #1 Easyboot Glove weighs 11.1 ounces and a size #1 Easyboot Glue-On weighs 7.5 ounces, an #1 iron shoe weighs 12.3 ounces .  (Remember 16 ounces=1 lbs). 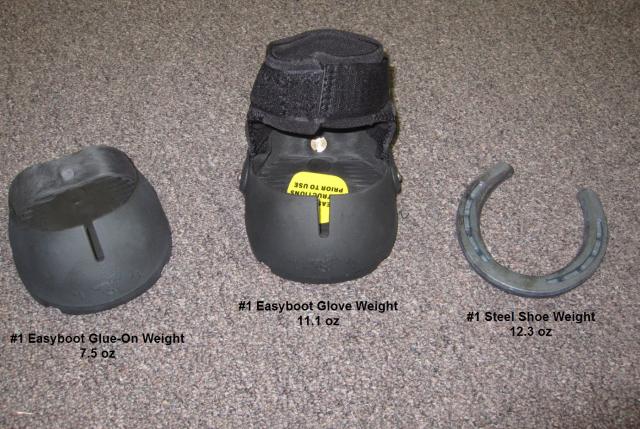 4.  The horse world is changing and more and more horse owners are requesting new trimming techniques and new hoof boot designs from their farriers/trimmers.

The future of hoof boots is bright!