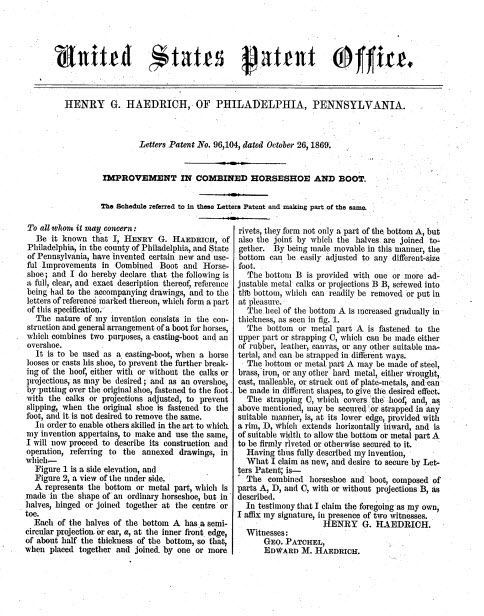 An example of  an 1869 horse shoe, hoof boot patent by Henry Headrich

On July 31, 1790 Samuel Hopkins was issued the first patent for a process of making potash, an ingredient used in fertilizer. The patent was signed by President George Washington. Hopkins was born in Vermont, but was living in Philadelphia, PA when the patent was granted.

The first patent, as well as the more than 6 million patents issued since then, can be seen on the Department of Commerce’s U.S. Patent and Trademark Office website at www.uspto.gov. The original document is in the collections of the Chicago Historical Society.

Hoof boots and hoof protection have been a popular subject with inventors from the United States and around the world since the early 1800’s.  In these early years horses were used for transportation, farm work and hauling heavy loads.  People depended on their horses and protecting their horses feet was a necessity.  The US Patent Office database is clouded with artwork and ideas from these early years.  Clever strap on horse boots and shoes of all different types are found by the hundreds.  These early inventors had some ingenious ideas for hoof protection and many of the sketches found in the database still have merit today.

I have a fascination with these inventors and the hoof boot designs that were developed hundreds of years ago.  I find it interesting to think back to the 1800’s and think about their lives, the materials that were available to create these devices and the stacks of prototypes that littered their workbenches.  I have spent many a late night printing these original patent documents and often look through these files to see what has been done in the past.  Over the past several months I’ve been working on recreating many of my favorite boot and shoe designs for this printed collection. Many of these replicas work quite well and with some material changes may end up as a production product. 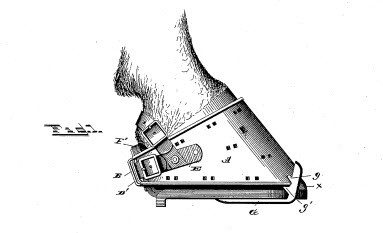 An 1800 hoof protection device held in place with a heel bulb strap.  Envision some small tweaks and material changes to this design. 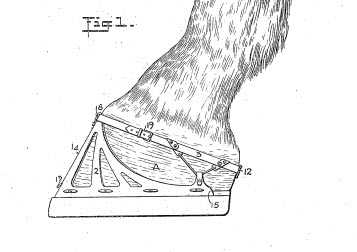 Another design from the 1800’s.  This one reminds me of a fine women’s shoe. Another that could work today with some small adjustments. 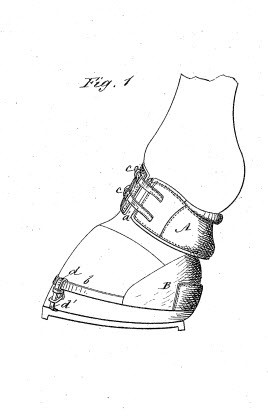 The early design has a cool pastern strap and heel retention cup. 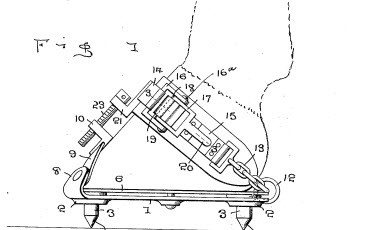 Many of the early designs had good intentions but would be barbaric if put to use.  This would stay in place but pummel the hoof in the process. 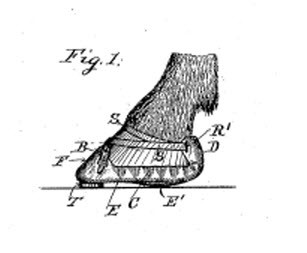 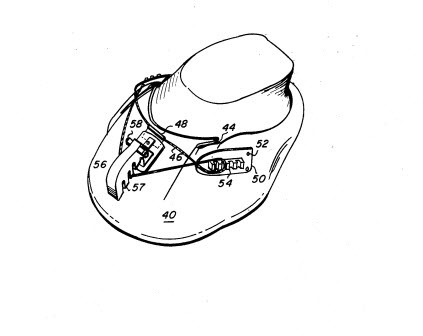 Fast forward to the early 1970’s and you start to see some of Dr Neel Glass’ first hoof boot prototypes found in the US Patent records.  Neel’s designs were pretty unique and marked the real first production hoof boot.  Neel’s original Easyboot design is still in production 40 years later and is the backbone of EasyCare. 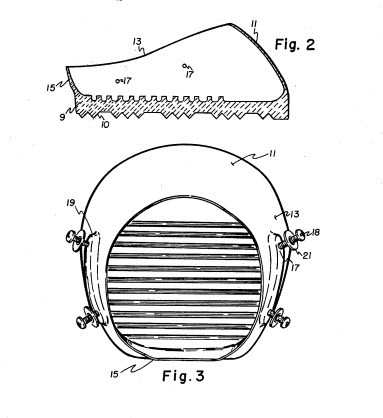 The examples above are just a couple of the hundreds of hoof boot and horse shoe patents that can be found in the US Patent database.  When you take the time to look at the past designs the possibilities for improving what we have today get fun and interesting.  EasyCare may need to do a fun Throwback Collection and use the original inventor’s names “Easyboot Headrich”  In the least we will recreate some of these designs for our EasyCare hoof boot museum.